Army of Ancient Rome in illustrations

February 11 2016
32
No wonder it is said - it is better to see once than hear ten. That is why today in historical In museums in the West, more and more often, a replica made by a modern master is exhibited next to the artifact itself. The fact is that it is difficult for a non-specialist to imagine the real appearance of, say, an ancient rusty sword or a whole vase from broken shards. In one museum, his employees once showed me a Sarmatian sword and said: “See, what a thick blade he has - 2 cm! How much did he weigh ?! " I had to explain to them that the thickness of the blade was hardly more than 5-8 mm at the handle, and towards the point it decreased even more, and it became "thick" due to corrosion and loosening of the surface layer, which ... mineralized over time! One can imagine the fables that they told tourists about the heavy 12-kilogram swords! And if there was a replica made by a professional next to it, 80% of the questions would disappear by themselves!


But such replicas are very expensive. But the drawings made by a professional artist are often not just informative, they also create a certain impression and allow you to remember what you need for a long time, if not forever (especially if you saw them in childhood!). Although, of course, drawing a picture is different and the artist is an artist too. For example, I once needed an artist to illustrate another book. I went to my Penza artists to ask for a person and ... I was given a person. A woman, a member of the Union of Artists and all that ... The fact that a woman didn’t matter to me: Krista Hook, for example, also draws warriors and draws them as well as her father. Gave her a sample to draw a "picture" with a knight. To change a pose, SAVING ALL DETAILS! It would seem that something easier if you know how to draw? But no, in the drawing that was issued to me, the belt buckle was already the belt itself, and there were many such blunders! But next to her on the table was her handbag with almost the same buckle! So it’s not enough to be a “member”, you also need to be able to draw a “bunk” and be able to imagine the “little things” of that time, which is not easy at all.

That is why artists who paint warriors of the past can literally be counted on the fingers of the West, and even their works differ in their quality and knowledge of the subject. For example, such an English artist, known for his works, as Angus MacBride. About how his work appeared for the publishing house "Osprey", fit to tell separately. He lived not far from Cape Town, where he had a studio, a stable and a paddock for horses. Naturally, students from college also helped him. He put them on in a sports leotard, put them in poses, put them on horses, after which he photographed and painted with photos, and after that he “dressed” what he needed. Hence the quality of the actual figures. Whereas even in the illustrations of the “Ospreevskiy” publications of some other artists with proportions of figures, all is not well. 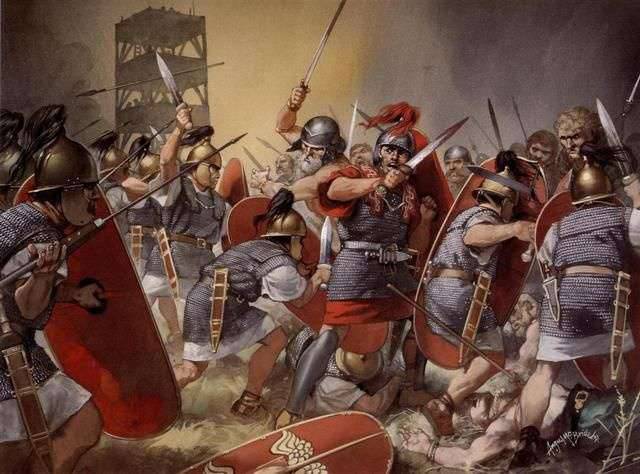 Battle of Alesia A. McBride

But there are spots on the Sun. Here is his painting “The Battle of Alesia”. This is when the Gauls from both sides tried to break through the fortifications of Caesar, who besieged this city. It seems to be all credible. But ... why did the legionary in the center raise his hand with the sword up? "Do not chop!" Stabbing! ”- that was the main commandment of the Roman legionnaire in a sword fight, especially if he was in the ranks. That is, here you see either an unlearned legionnaire or ... Angus in a fit of feelings just forgot about it! 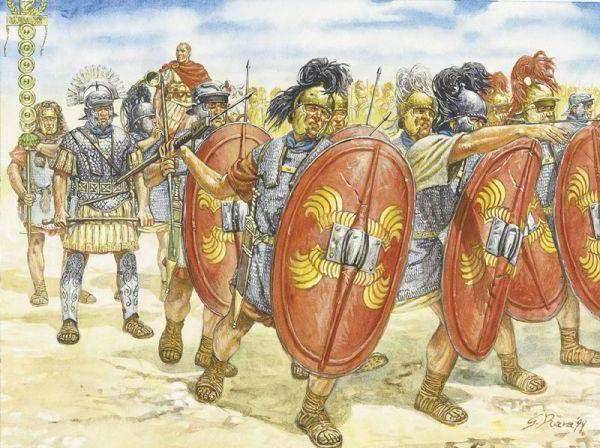 But Giuseppe Rava, an Italian artist and miniaturist, inspired by the works of the same Angus MacBride. The author of an amazing amount of work, draws on the company "Italeri", "Andrea Miniatures", "Emhar" and many others. Here is his work: "The Roman legion in attack" and it has everything: the rank and file, and the standard-bearer, and the centurion with a stick, and the commander. And everything seems to be correct, but ... a legionnaire close to us, who pulled his hand back to throw his dart ... He has a red tunic on it! And he should have known that there was a lengthy controversy in the English historical journals on this issue, the purpose of which was to find out what color the tunics were at the legionnaires. And they found out - white, the color of unbleached linen! And only with centurions and Praetorians - red, but with the ship's command ("marines") - blue. Moreover, those and others painted the juice of the purphenic shell, but in different concentrations. Similarly, they painted the shields, the outer surface of which was often just covered with linen, because of which it was ... the same color as the tunics! And in confirmation of the illustration of Angus MacBride - "The Romans land in Britain." Legionnaire in a white tunic, centurion - in red! 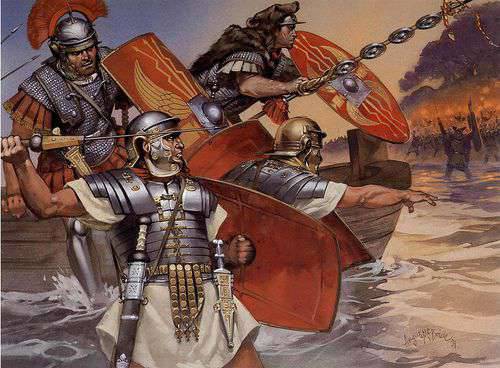 The Romans land in Britain. Painting by A. McBride. 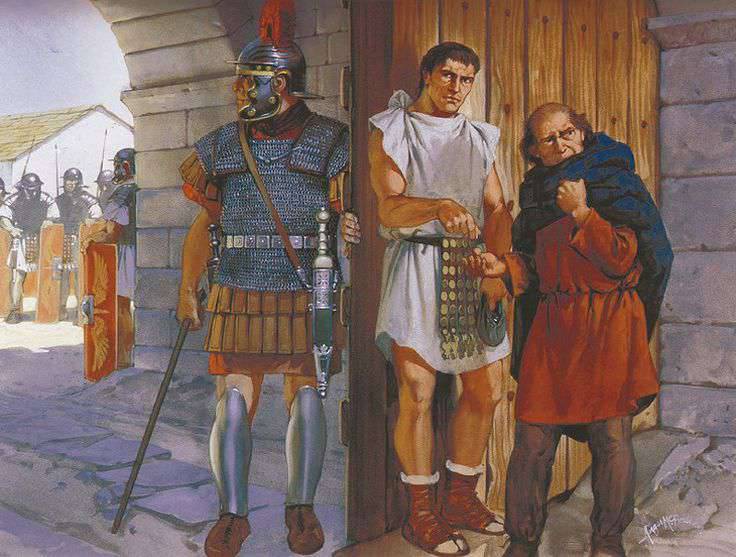 Pay spy. A high-ranking Roman officer, dressed to attract no attention, in a simple tunic with a soldier's belt, gives the “30 pieces of silver” to local Judas. North England, I century AD Painting by A. McBride 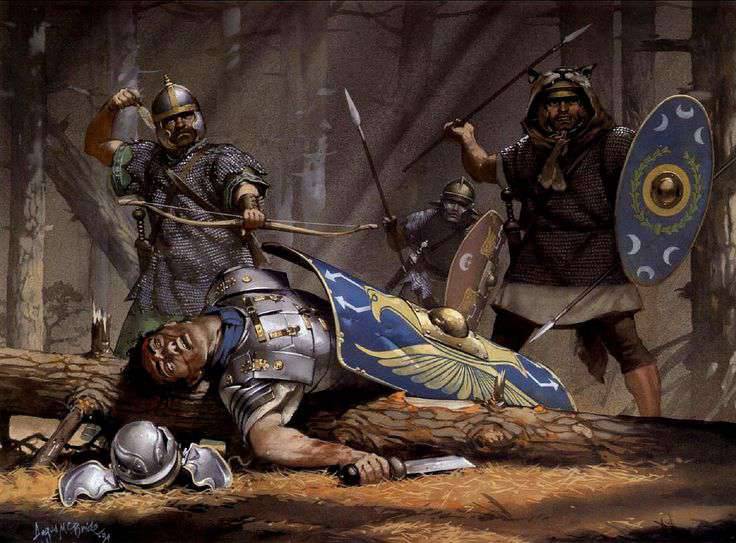 Roman auxiliaries in the forest during the Second Dacian War 105 AD Painting by A. McBride.

And here is another very illustrative work of Angus McBride, showing how carefully he worked with sources. On it are Roman auxiliaries - horsemen from the cavalry of the Celts cut Marcomans-Germans, I - II centuries. AD The fact is that during the campaign in Dacia, the legionnaires were forbidden to “hunt for their heads”. But ... on the column of Traian there are several images of warriors of auxiliary units with severed heads, which they hold not only in their hands, but even in their teeth! And ... show their trophies to Traian. And judging by the fact that this scene hit the column, there was nothing in this “such”. Like, what will you take from these savages allies! And notice - on one chain mail with a notched hem, on the other a scaly shell. Typical equipment equestrian auxiliaries from the column of Trajan. 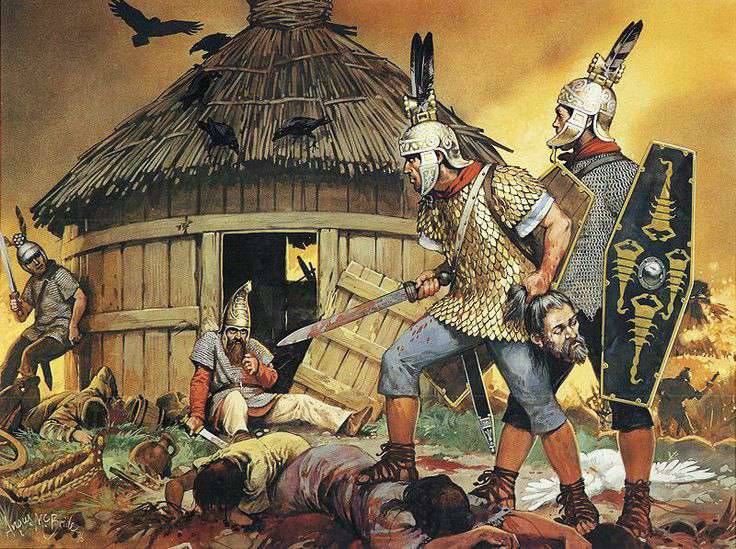 But J. Rava, apparently, did not look at the bas-reliefs from the column of Trajan, although they were near him - in Rome, in the “square Coliseum”. Why did he “with his legionaries” put an iron “pipe” of plates on his right hand? None of the Roman warrior figures from Trajan’s column has such a detail! 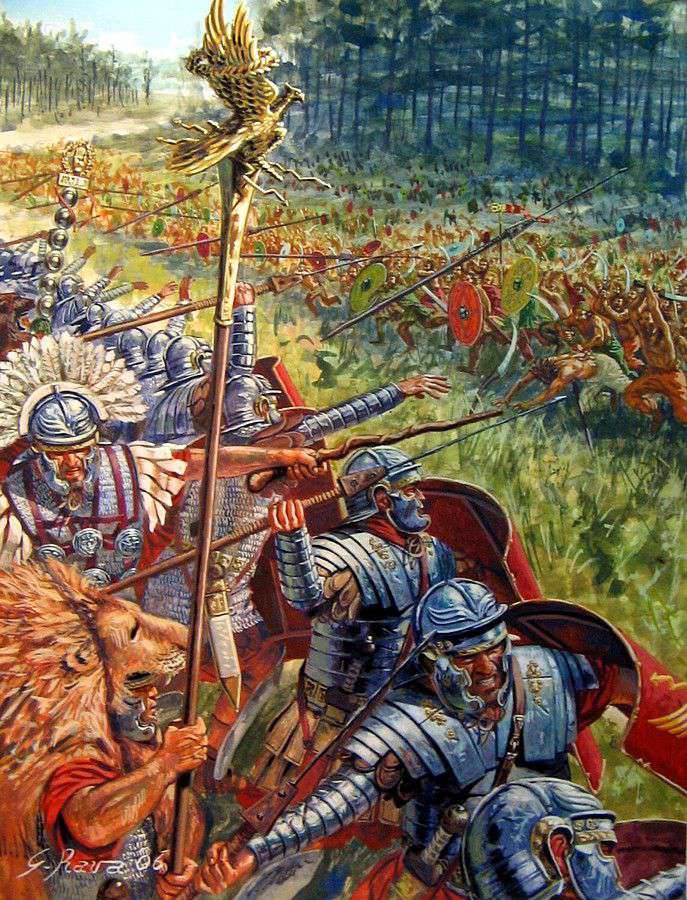 Works by Peter Connolly are considered classics, because he not only painted, but also wrote. Here, for example, his legionary I in. BC. with an oval shield skutum and a helmet kulus in the helmet, as well as in a chain mail with shoulder pads. This drawing became, one might say, a textbook image, although, in my opinion, the shield along the edge looks too thin.

Legionnaire I in. BC. P. Connolly.

Another legionary of the same time in the Montefortin's helmet. Here again Peter Connolly drew a red tunic and a shield, but this drawing appeared before the question was closed.

It should be noted that even before these artists the British had very good “draftsmen of the Romans”, for example, such an artist as Ronald Embleton, even though he drew them all in red tunics and even pants! Although this paint was very expensive and for all the Roman army, especially for pants, it simply would not be enough for everyone! 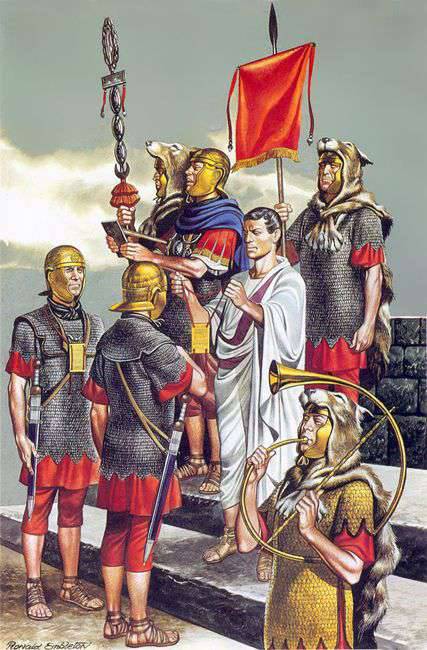 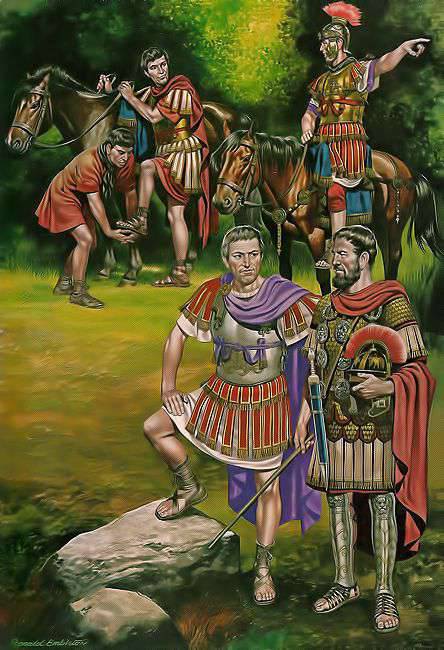 But this reconstruction of the Roman clibanarium Ronald Embleton made on a find in Dura-Europos, where it was discovered just such horse armor. Well, he did not invent all the other details of the armor either. They are in museums. Here is just a shield ... He is very big. Another British historian and designer Mike Simkins depicted his exactly the same warrior with a hexagonal shield, but who is right and who is “more to the right”, to say exactly, alas, it is impossible. 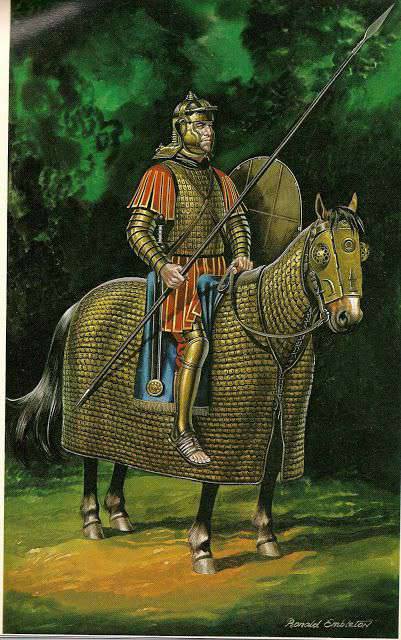 The rotates of the Romans were also mercenaries. They themselves such a thing as throwing stones is not difficult. But to shoot from a scorpion, onager or ballista - why not. In this they did not see anything shameful for themselves! 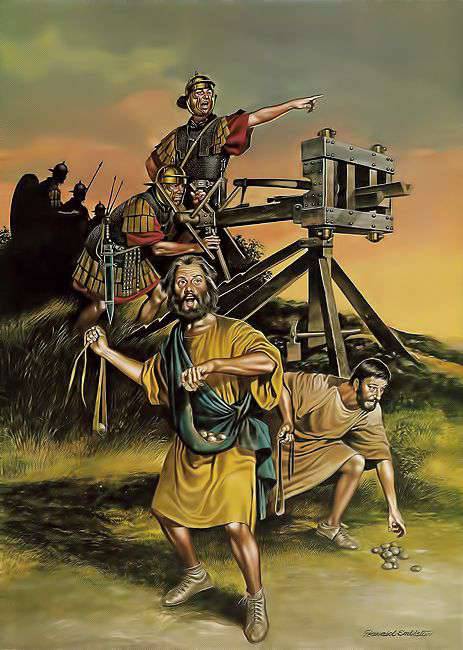 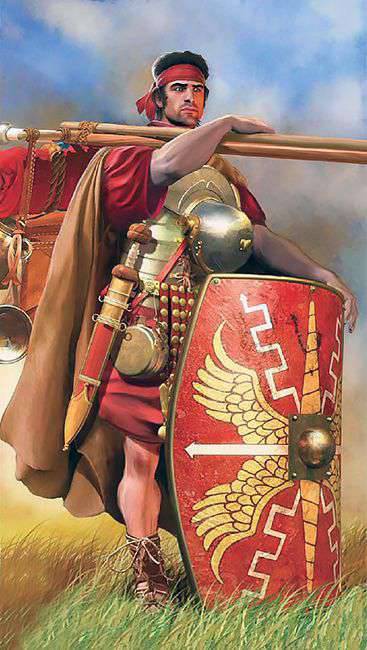 So, many people are trying to draw Roman warriors in the West, both in Italy and in England, as well as in other countries. But as always, "the devil is hiding in the details." For example, the image of a Roman legionary in the form of a “Marian Mule” by Christos Gianopolus from Greece. It seems that everything is fine, but it is clearly visible that his shield is too wide. He was so great and hard, and so Christos must have something very heavy! 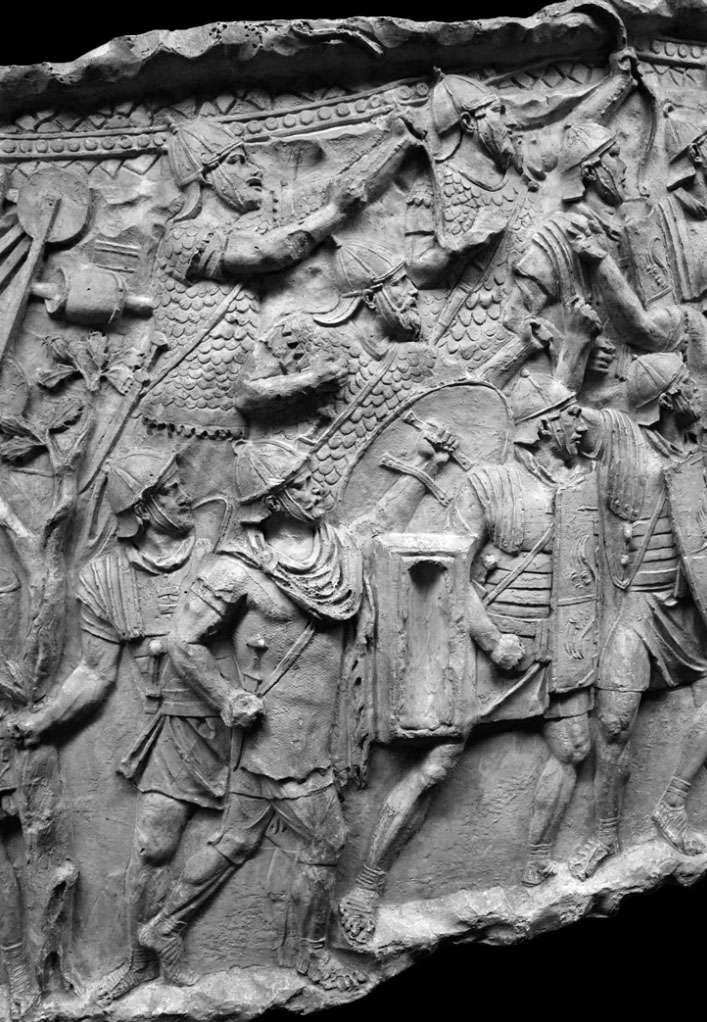 Bas-relief from the column of Trajan.

Ctrl Enter
Noticed oshЫbku Highlight text and press. Ctrl + Enter
We are
Anglo-Transvaal war in the illustrations of the magazine "Niva"Samurai and kaji
32 comments
Information
Dear reader, to leave comments on the publication, you must to register.