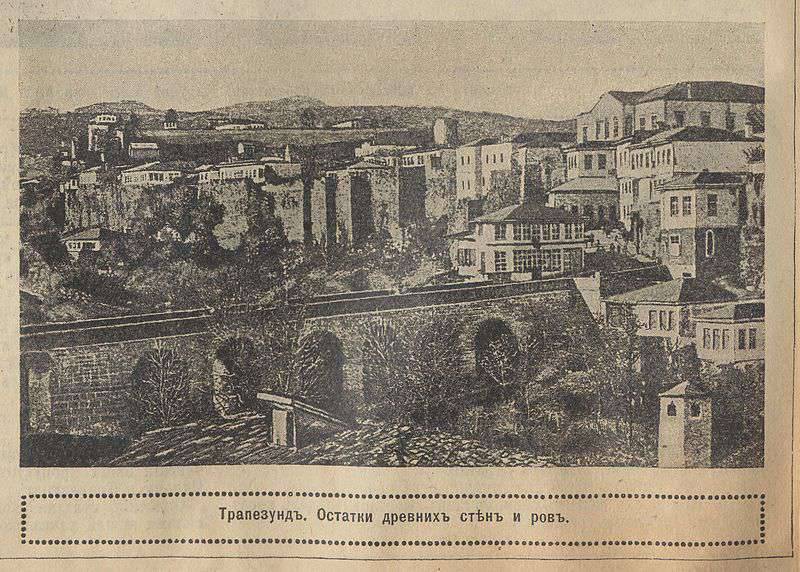 100 years ago, on February 5, 1916, the Trebizond operation began. Joint offensive operation of the Russian Caucasian Army and the Black Sea fleet against the 3rd Turkish army with the aim of mastering Trebizond. Using the success achieved in the Erzurum operation, the troops of the Primorsky detachment under the command of Lieutenant General Lyakhov launched an offensive from the turn of the river. Arhave along the coast with the support of the ships of the Batumi detachment. The meal was taken on April 5th. The city became the supply base for the troops of the Primorsky detachment. In May, 2 infantry divisions were transferred here from Mariupol by sea, after which the Primorsky detachment was reorganized into the 5th Caucasian Corps, which occupied occupied positions until the end of the war.

In early February, the 1916 in Transcaucasia, the troops of the Russian Caucasian Army under the command of N. Yudenich, successfully completed the Erzerum operation, brilliantly planned and implemented. 3 (16) February Erzerum - the key city in northeastern Turkey, was taken. The Russian army breached the Turkish front. The seizure of the Erzurum area opened the gates to the Russian troops through the city of Erzincan to the city of Sivas, that is, to Anatolia, and demanded that the Russian command seize the Black Sea coast and the city of Trabzon (Trabzon). Thus, new strategic opportunities opened up before the Russian Caucasian army. The Turkish command had to hastily restore the 3 army, and to deploy new troops. The plans of the German-Turkish command for the 1916 campaign in the Middle East were destroyed.

On the left flank of the Caucasian army, our troops also successfully advanced. 3 February Russian troops entered the city of Mush west of Lake Van, moving deeper into the Ottoman Empire more than 150 kilometers. 17 February was taken by Bitlis. The expeditionary force of Baratov was successfully operating in Persia. The scale of the convincing victory of the Russian army was already looming - the rout of the Turkish troops and the seizure of vast territories of the Ottoman Empire from the southern coast of the Black Sea to the plains of Mesopotamia. This success was all the more significant that only a few weeks earlier, Russia's western allies in the Entente suffered defeat from the Turks in the Dardanelles and in Mesopotamia. Britain and France had to evacuate troops from the Dardanelles. British troops were surrounded in Iraq.

Situation at the front

The Russian command correctly believed that after the crushing defeat of the 3 of the Turkish army, it was necessary to develop the offensive. However, there were two main problems:

1) supply the army, which strongly advanced in the roadless, devastated and deserted land. It was necessary to establish rear communications and organize supplies by sea;

2) the nomination of large reinforcements by the Turkish command, which, according to the data obtained, reached the 3-5 corps.

To improve the supply required to establish supply at sea, which forced to seize Trapezund rather. In addition, it gave a more favorable location of the troops of the Caucasian army to repel the expected counter-offensive of the Turkish troops. Therefore, the question of the capture of Trapezund was raised during the Erzerum operation, as the Caucasian army was highly desirable to help the Black Sea Fleet in the form of a landing force in the rear of Erzerum, and Trabezund was most satisfied with this goal, since the best road went from him to Pontic.

The command of the fleet recognized the task of taking Trapezund from the sea possible, but, by calculation, this required a landing force in the 1 corps. And the Stavka did not dare to allocate significant forces from the European Theater. Therefore, the idea of ​​a landing operation during the Erzerum operation stalled, Erzerum was taken by only one land army, and the Black Sea Fleet still performed its main task, disrupting the Turkish maritime communications. The Primorsky Detachment of the Caucasian Army was supported only by a specially formed Batumi detachment (1 battleship, 2 destroyer, 2 destroyer, 2 gunboats) under the command of MM Rimsky-Korsakov, captain of the 1 rank.

According to the calculations of the Russian command, the complete concentration of Turkish reinforcements and replenishment required 2-4 of the month, after which the Turkish command could organize a major offensive. Therefore, it was necessary to continue the attack until the arrival of fresh Turkish troops. In addition, it was decided to strengthen the Caucasian army 1 and 2 Kuban Plastun brigades, which were transferred from the Western Russian front to Novorossiysk.

Thus, 23 January (5 February) 1916, the Russian army continued its strategic offensive, launching a large-scale operation, the purpose of which was to seize the large city and port on the Black Sea coast - Trabzon (Trabzon). The capture of Trabzon was blocking the closest and best (by sea) communication of the 3 of the Turkish army with Constantinople. And the capture of Trapezunda by Russian troops gave the Caucasian army operational freedom for the right wing. The right flank of the Russian army, after the seizure of this port, would have hung over the center of the Turkish army in the Erzurum-Erzincan direction.

Spring thaw stopped the advance of the Russian troops in all directions, except for the maritime. On the Black Sea coast, spring comes early and the thaw is over. Therefore, here from January 23 (February 5) 1916, the Primorsky Detachment was very successful in cooperation with the fleet.

Our troops have consistently captured the strong defensive lines of the Turks along the Arhava and Vice rivers. 24 February, our troops captured the city of Rize, which was the seaside base of the 3 Turkish army, and left the town of On at the approaches to Trebizond. By March 12 Russian troops reached the line of the river. Baltachi-darasi and were just 50 km from Trebizond. Therefore, the Russian command decided to limit itself to an offensive on the coastal flank and to send reinforcements there — the Kuban Plastun brigades. And in Trabzon, they decided to create a naval base protected by naval artillery and minefields. At the same time, this port was to become an intermediate army supply base.

The seaside squad (11 battalions, 9 squads, 3 hundreds, 4 engineering companies and 38 guns) had 14 Turkish battalions against itself. With the further offensive, the Primorsky detachment was to allocate barriers to ensure its left flank and rear. The detachment moved a significant step forward in relation to the right wing of the 2 of the Turkestan Corps. It was decided to strengthen the Kuban Plastonic brigades. The seaside detachment, advancing with the support of the fleet, was to methodically, stage by stage, take frontiers on the approaches to Trapezund and, fixing on them, continue moving towards the city. The ultimate goal was to capture enough for the defense of the port bridgehead. It was possible to move only along the coastal strip, where besides the trails in the wooded foothills, there was only one road along the seashore. In this case, the seaside flank of our troops was occasionally supported by the ships of the Black Sea Fleet.

From 19 March to 1 April, our troops advanced 27 km, reaching the fortified line of the enemy on the river. Kara-Dere. The Turks went on the counter, trying to break through the Russian front and stop the movement of the Primorsky Detachment. However, no success. The further movement of our troops in order to bring down the Turks from the line r. Kara-dere and the exit to the port of Trapezund was possible only after the arrival of Kuban elas. Kuban brigade ships of the Black Sea Fleet were transferred from Novorossiysk to Rize.

Attempts by the Turkish fleet to paralyze this movement of troops were not crowned with success. The cruiser "Breslau", which 22 March, together with the German submarines went to the area of ​​Novorossiysk, was driven off by the Russian battleship. A submarine that appeared in Rize was damaged by a Russian destroyer. At dawn 25 March 1916 g. Transports with soldiers, guarded by ships of the Black Sea Fleet and 14 seaplanes, approached the Rize. The landing of the troops was completed by 17. In total, 18 thous. Cossacks-plastuses, 12 guns, up to 3 thsd. Horses, 330 tons of cargo were planted.

Strengthened to 32,5, thousands of soldiers. The Primorsky Detachment 1 of April resumed the offensive. With the support of naval artillery, our troops broke through the front on the r. Kara-dere and 5 (18) of April occupied Trabzon. Our troops captured the coastal artillery of the enemy, large trophies, since the port was a reloading base for the supply of the Turkish army. Then Dzhevizlik with the adjacent area to Kumushki-Khani was captured, on the left flank communication with the 2 Turkestan corps was established. Around Trapezund Yudenich ordered to build a fortified area.

From 7 April to 18 in May, our troops fought to expand the occupied territory to secure Trebizond, and the Platan, Il, and Maxila-Hanlari lines left. The Turkish command, concerned about the breakthrough of the Russian troops, which threatened to reach the 3 Army from the north, was concentrating on the troops and strengthening the frontiers on the ridge of the Pontic Taurus. By May 25, our troops expanded the Trabzon bridgehead even more. However, it became clear that with the available forces, the Primorsky Squad was not able to hold the occupied bridgehead with strong pressure from the enemy and could not pose a serious threat to the Turks in the Bayburth direction. Therefore, from 6 to 20 in May, Trabzon sent 123-th and 127-th third-priority infantry divisions (about 35 thousand people). The troops were transported from Mariupol.

After that, the Primorsky detachment was reformed into the 5 Caucasian Corps (46 battalions and 9 squads). The arrived divisions occupied the front from the sea to the highway from Trebizond, and parts of the former Primorsky detachment, as having experience in fighting in a wooded area, were concentrated in the center and on the left flank of the corps. The left flank was the most important, since in the case of reinforcements arriving, Turkish troops could counter-strike the northeast to cut the land communications of the 5 Caucasian Corps and its connection to the 2 Turkestan corps along the coast.

The further offensive of our troops was not developed, as the Turkish command also strengthened this direction, creating a Trabanese grouping force up to the 41 battalion. As a result, the 5 Caucasus Corps maintained its positions until the end of hostilities against Turkey. 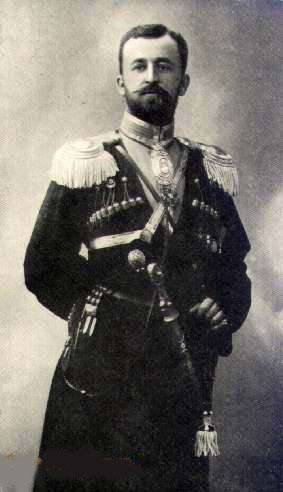