What will increase sea power 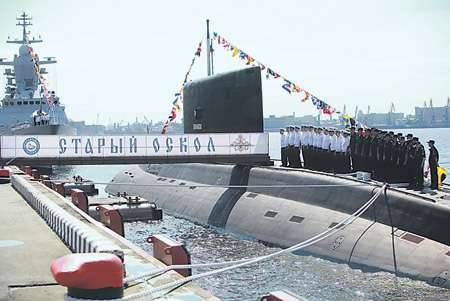 The past 2015 was for the Admiralty Shipyards, part of the United Shipbuilding Corporation (USC), one of the busiest periods in the construction of a series of Project 636 submarines for the Black Sea fleet Russia.

On the day of the 311 anniversary of the enterprise, a solemn ceremony of raising the Naval flag took place on the fourth ship of the series - the large diesel-electric submarine Krasnodar.

“Become! Equal! Attention! ”- these teams to build the crew marked the beginning of the solemn ceremony of raising the flag of St. Andrew on the submarine“ Krasnodar ”. The atmosphere of the holiday, which prevailed at the plant on this bright sunny day, was emphasized by the sounds of the naval orchestra and the guard of honor, frozen in a ceremonial formation on the outfitting quay. Honored guests, dozens of admiralties and numerous media representatives gathered here.

“It’s symbolic that the flag raising ceremony takes place on November 10, the birthday of the Admiralty shipyards, and the completion of the fourth submarine for the Russian Black Sea Fleet was a worthy working gift from the team,” Alexander Buzakov, general director of the Admiralty Shipyards, welcomed the participants. - Recent running and state tests of the order convincingly confirmed the high seaworthy and combat quality of the new ship. And the pace of construction of the submarine "Krasnodar", which surrenders almost a month earlier than planned, clearly confirms: the series took place!

Rear Admiral Viktor Kochemazov, head of the Combat Training Directorate of the Main Command of the Navy, emphasized the particular significance of this event:

- Today is a momentous day in the life of the Navy. During state tests, the ship fully justified all the hopes placed on it, and there is no doubt that the submarine will retain these high technical indicators during combat service.

The submarine "Krasnodar" became the second ship of the "Black Sea" series, which the JSC "Admiralty Shipyards" transferred to the Navy in the past year.

Four months earlier, on July 3, the rise of the flag of St. Andrew’s took place on the third boat of the Stary Oskol series. The solemn ceremony was held at the Lenexpo exhibition complex as part of the 7 International Maritime Defense Exhibition (MVMS-2015) and became one of the main events of the forum.

... Even before the official commencement of the event, the crews of the base minesweeper Alexander Obukhov, the amphibious assault ship Eugene Kocheshkov and the corvette The Stoic were built on the deck of the ships moored at the passenger berth of the Marine Station complex. Decorated with flags, the warships greeted not only representatives of the Ministry of Defense and the command of the Navy, but also their new "colleague" - the submarine "Stary Oskol", preparing to raise the flag of St. Andrew.

“This ship was built according to a modernized 636 project, which has no analogues in the world,” said Admiral Chirkov. - It is equipped with the most modern weapons, military equipment and radio-electronic means. In the near future, the submarine "Stary Oskol" will help the fleet to ensure Russia's national interests in the Black, Mediterranean and other seas. "

Gratitude to the designers and builders of the new ship, Denis Manturov expressed in his greeting, wishing the crew that the newest weapons installed on the submarine should be used only in exercises.

"The Stary Oskol submarine is very much needed by the Russian Black Sea Fleet," said Deputy Defense Minister Yury Borisov. - The ship successfully passed all types of tests and confirmed its quality and reliability. Good luck and seven feet under the keel to the crew! ” 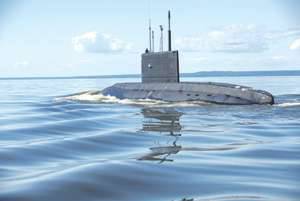 September 21 in the military harbor of the city of Novorossiysk moored a submarine of the same name, built on the JSC "Admiralty Shipyards."

The arrival of the new submarine was truly historical an event for the country's naval forces: Novorossiysk is the first submarine to be included in the Russian Black Sea Fleet since the collapse of the Soviet Union.

During the tests and the transition from the Northern to the Black Sea Fleet, the sailors performed torpedo and rocket firing, passed more than 6500 nautical miles and participated in the Black Sea Fleet maneuvers, spending a total of 40 days at sea.

As sounded in the report of the commander of the ship, the technical means and life support systems of the diesel-electric submarine Novorossiysk showed themselves from the best side during the transition.

“I am sure that Novorossiysk will become an excellent combat unit of the Black Sea Fleet,” Admiral Alexander Vitko, commander of the Black Sea Fleet, said at the solemn welcome ceremony. “Its appearance will lead to some shift of emphasis in the Black and Mediterranean seas and will make a huge contribution to the maintenance of peace.”

In December of last year, the second ship of the Rostov-on-Don series arrived at the location. While making the transition from the Northern to the Black Sea Fleet, this boat struck with Kalibr-PL cruise missiles at the targets of the Islamic State in Syria. It is highly accurate. weapon sea-based for the first time used from a submerged position. As a result of the strike, all the intended targets were hit.

This year, the submarine forces of the Black Sea Fleet will join the Stary Oskol diesel-electric submarine, which is currently undergoing a test program in the Northern Fleet. ” Until the end of 2017, all six boats of the series will take their places in the military harbor of Novorossiysk. The latest hydroacoustic systems and rocket-torpedo complexes were installed on all six boats of the Black Sea series.

The high rating of the 636 project ships from the High Command of the Navy has been repeatedly heard at ceremonial events dedicated to the launch and transfer of submarines.

“In these ships, built according to a modernized project, all the most modern designs were laid and implemented, they have increased secrecy and high combat effectiveness,” Rear Admiral Viktor Kochemazov said during a press conference for journalists at the flag raising ceremony on the submarine “Krasnodar” ". - The uniqueness of this series is that all the boats are built for exploitation on the Black Sea, are being tested in the Baltic Sea, and they are being completed in the waters of the Barents Sea! And in all climatic zones they demonstrate their reliability and confirm all the technical characteristics of the project. And today the high command of the Navy is working on the issue of building boats of this series not only for the Black Sea Fleet, but also for other fleets.

At the present time, the construction of two final series of submarines Veliky Novgorod and Kolpino is in full progress at the stockpiling shop of Admiralty Shipyards JSC. Their construction is strictly within the contractual terms. In September and November, the hulls of the ships were docked, in March and May they were scheduled to launch into the water. Transfer of ships to the customer will occur in accordance with the terms of the contract 2016 year.

“The 2015 year was a good test of professionalism for our team,” said Alexander Buzakov, General Director of Admiralty Shipyards, at a gala evening dedicated to the company's 311 anniversary. - We have successfully coped with the peak load on the transfer program, which we can now orient with and say with confidence: Admiralty shipyards can take on three submarines annually.

As the head of the shipbuilding department of the Russian Navy, captain of the 1 rank, Vladimir Tryapichnikov, said recently, the construction of a series of six submarines of the 636.3 project for the Pacific Fleet may begin in the near future.

“In the future, the Navy is making attempts and, in general, they must find their continuation in laying and building six more submarines of the 636 project, which will go to the Pacific Fleet,” said Vladimir Tryapichnikov.

According to the United Shipbuilding Corporation, at the moment it has not received official notification from the Ministry of Defense about the need to continue the 636.3 “Varshavyanka” series for the Pacific Fleet. No such plans appear yet in the state defense order for 2016. Nevertheless, the country's largest shipbuilding holding is ready to build new ships and is able to successfully implement such an order.

We are in Yandex Zen
Aggravated copy of the Ministry of Food Industry
Shipbuilding: inefficient and unprofitable
44 comments
Information
Dear reader, to leave comments on the publication, you must to register.