More than a century under the red banner 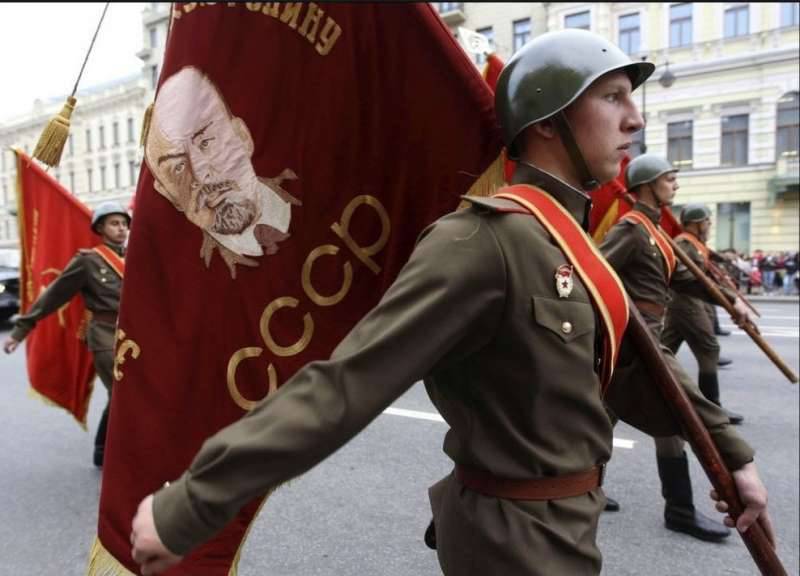 Most of the twentieth century, Russia has lived under a red flag. And the answer to the question of why it is of this color, seemed unambiguous to many. Even when Soviet children were accepted into the pioneers, they were explained: the pioneer tie is a part of the Red Banner, the color of which symbolizes the blood shed in the struggle against oppression, for the freedom and happiness of the working people.

But is it only with the blood of fighters and heroes that the origin of the paper cloth is connected?

Since ancient times, red has been a symbol of power and power. And after Julius Caesar was the first to put on a purple toga, it became a vestment for the Roman emperors (as we remember, the governor of the emperor in the province — the procurator — was content with a “white cloak with a bloody underlay”). And not by chance: red dyes were extremely expensive. It was the same in the Second Rome ”- in Byzantium. Thus, the sons of the emperor, born during his reign, had a prefix to the name Porphyrogenitus, or Porphyry, as opposed to those born before the accession of Caesar to the throne (Byzantine emperor Constantine VII Porphyrogenitus became the godfather of Princess Olga during her baptism in Constantinople in 955 year) . This tradition was maintained and later, over the centuries, red was still the prerogative of monarchs and the highest nobility. Let us recall the ceremonial portraits of royal persons: their heroes appear, if not in red robes, then necessarily on a red background.

Only red sealing wax was always used for royal seals, the use of such a seal by private individuals was strictly prohibited. In Russia, red was also considered the color of royal power, "statehood", and the sovereign's seal was placed only on red sealing wax. The Council Code 1649, the Tsar Alexei Mikhailovich for the first time introduced the concept of "state crime". And one of its first types is the use of a red print by anyone other than the king and his clerks. For this relied only one type of execution - quartering.

The Great French Revolution of the end of the XVIII century brought a revolution in all the previous orders and customs. From its first days, when crowds of urban working people gathered for stormy gatherings at the royal palace, someone thought up waving a piece of red cloth over their heads. A bold gesture was picked up with pleasure: it was a sign of rebellion, insubordination to the king. The “protesters” would say to him: “Well, here is your red color ... and what can you do with us?” In addition, commoners developed a fashion for red - “Phrygian” - caps, similar to those that were released in ancient Rome to the will of slaves. So people wanted to show: now we are free.

And the most radical group, the Jacobins, led by Robespierre, made the red flag their "trademark". They gathered under it the inhabitants of the slums of Paris, setting them against their political opponents. However, when the Jacobins themselves seized power, they abandoned a separate “ultra-revolutionary” flag and adopted the already existing blue-white-red tricolor.

It was from the time of the French Revolution that the red flag became a symbol of an unauthorized action, a struggle against the existing order ...

Incidentally, with the light hand of English writer Robert Louis Stevenson, it is considered that pirates have always committed attacks under a black flag with a skull and bones. But this is not the case - sea robbers often raised a red cloth, thereby challenging everything and everyone! Yes, and his very name "Jolly Roger" comes from the French Joyeux Rouge (bright red). And it was long before the French Revolution!

One way or another, the French themselves remembered the “rebellious” kumacha only half a century later, in 1848, when another revolution broke out in the country. The industrial bourgeoisie came to power, but the Paris "street", above all the armed workers, persistently tried to dictate their demands - to ensure the right to work, to eliminate unemployment, etc. And one more thing: change the national flag: instead of the tricolor - red. And almost everything was done. But when it came to the seemingly insignificant flag, the authorities rested. And only after a stormy debate, under the powerful pressure of the rebels, it was possible to agree: the old banner remained, but a red circle was sewn onto the blue stripe - a socket. The workers considered this to be a great victory, while the bourgeoisie was a sign of danger, an emblem of socialism, which it could not accept. The revolution was soon suppressed, and the socket was liquidated. But from now on, red has become not just a symbol of rebellion, but a social revolution. That is why in March 1871, the Paris Commune already unconditionally made the red flag its official symbol ... on the 72 of the day.

UNDER THE BANNER OF THE REVOLUTION

Two sides of the legally approved banner of the Armed Forces of the Russian Federation. Figure from the official website of the Ministry of Defense of the Russian Federation
However, the true recognition of the scarlet cloth was found in Russia, although it was accepted rather late - Russian rebels never used red flags. After all, not a single popular action was formally directed against the king - the masses of people would never have risen against the "anointed of God." Therefore, each leader declared himself either a "miraculously saved" king or prince, or a "great leader", which the sovereign sent himself to punish the oppressors of the people. And only at the beginning of the 20th century, after the czarist power was discredited as a result of Bloody Sunday 9 of January 1905, did “red riots” begin in the country.

Violent rallies and columns of demonstrators during the outbreak of the first Russian revolution turned out to be colored with red banners and banners. This was a double meaning: they symbolized the blood of innocent victims, shed by the royal punishers of January 9, but also a challenge to the official authorities from those who rose up in the struggle for social justice.

The sailors who rebelled in June 1905 of the year on the Prince Potemkin-Tavrichesky battleship (the monarchist press immediately dubbed them “pirates”) raised the red flag.

And during the December armed uprising in Moscow, which is considered the highest point of this revolution, red banners fluttered on almost all the barricades. And Presnya began to be called Red - even before the bloody defeat of the workers' squads by government forces.

From the first days of the February 1917 revolution of the year, Petrograd became “red” - banners, bows, armbands, flags ... Even the grand Duke Kirill Vladimirovich, defiantly, showed up in the State Duma with a red rosette in his buttonhole. And also a badge with a state emblem was issued, on which the two-headed eagle held red flags in its paws!

Soon the Bolsheviks entered the political arena. They immediately began to create armed detachments of the Red Guard - mainly from the workers, as well as soldiers and sailors. Their soldiers had a red armband with the inscription "Red Guard" and a red ribbon on the headgear. It was the Red Guards that made up the main strike force of the October armed uprising. Another powerful force that took an active part in the new Russian turmoil was the revolutionary sailors. They considered themselves the heirs of the "Potemkin" and most often acted under the red banner, although they were mostly anarchists.

For the Bolsheviks who came to power, led by Lenin, there was no doubt about the color of the new banner of Soviet Russia: only red is a symbol of the Revolution! From here the Red Army, the Red Star, the Order of the Red Banner ...

According to the decree of the Central Executive Committee of 8 on April 1918, the red flag of the Soviet Republic was approved as a state flag and as a battle flag of its Armed Forces. However, in size, shape, slogans on the panels, he did not have a single sample. Inscriptions were taken mainly from the appeals of the Bolshevik Party: “For the power of the Soviets!”, “Peace to the huts - war to the palaces!”, “Forward to the bright kingdom of communism!” And others.

The USSR Constitution 1924 of the year approved the national flag of the country, which was a red cloth depicting a sickle and hammer and a five-pointed star "as a symbol of the unbreakable union of workers and peasants in the struggle to build a communist society." This symbolism remained “in force” until the collapse of the USSR in 1991. At all official and unofficial events of the Land of Soviets - congresses and conferences, demonstrations and parades, and solemn gatherings - red dominated. Victory Banner was red, hoisted by Soviet soldiers over the Reichstag in 1945.

In the end, even the name of the main "ceremonial" square of the country - Red - was unwittingly reinterpreted in the same, Soviet-revolutionary, vein, and I had to specifically clarify that in this case the name is old and means "beautiful."

In the run-up to the collapse of the Soviet Union, when general mass “exposures” of everything connected with history of the Soviet period, the calls for abandoning the red flag as the personification of the communist government were increasingly repeated. Then even the “red-brown” cliche appeared, which was applied to all who opposed the “democratic renewal of the country” ...

Some radical democratic movements (not to mention monarchists) began to use the pre-revolutionary tricolor at their events since 1988, gradually it became established in the public consciousness as a symbol of the future new Russia. All “red” should have been left in the past.

August 22 1991, after the defeat of the putsch of the State Emergency Committee, the emergency session of the Supreme Soviet of the RSFSR decided to consider the “historical” white-blue-red official flag of the Russian Federation - the one that was the official flag of the Russian Empire from 1883 to 1917 (resolution 1 of November V Congress of People's Deputies). Red banners in the Armed Forces were also canceled, they were withdrawn from all parts and replaced with tricolor ones. However, not everyone in our country accepted such changes, especially in the army. The left political forces were not going to give up the red flags.

29 December 2000 of the year Russian President Vladimir Putin approved the law on the banner of the Armed Forces of the Russian Federation (in the USSR there was no such uniform banner). The main military banner of Russia bore a symbolic — unifying — meaning, including heraldic elements from different eras of Russian history: red, five-pointed stars and a two-headed eagle. At the same time, the Red Banners, famous for their glory, were returned to military units.