Syrian premiere: what the newest Su-35С is capable of 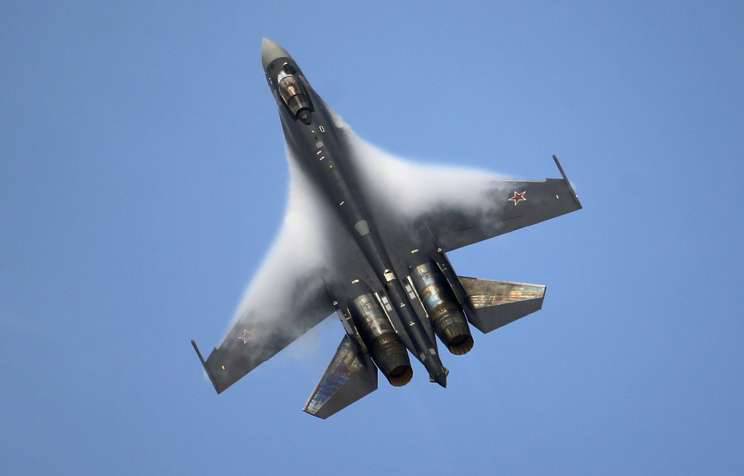 MOSCOW, 4 February. / Tass /. On the transfer to Syria of the newest Su-35C fighters it became known 1 February. According to the Ministry of Defense of the Russian Federation, the fighters began to carry out combat missions at Hmeymim airbase last week.

The appearance of the newest Su-35C fighters at the Khmeimim Russian air base in Syria has aroused the interest of both the Russian press and a number of foreign publications. About this, in particular, wrote the German magazine Stern, the American editions of The National Interest and The Washington Times.
As noted by Stern, the Russian Su-35С is considered to be the most dangerous fighter in the world today, with the exception of the American X-NUMX generation F-5.

The magazine also writes that the aircraft has high maneuverability, equipped with a new radar "Irbis" and improved engines. The publication emphasizes that, with its high performance, Su-35 is quite cheap compared with the most advanced Western models. Stern predicts Russian fighter success in the global market weapons.

TV channel "Star" / YouTube
The National Interest, in particular, quoted the words of a high-ranking Pentagon official who called these fighters "excellent and dangerous planes, especially if they were built in large numbers." The official compared the Su-35 with American aircraft and noted that the F-15 and F / A-18E when meeting with the Russian aircraft will be "busy".

As the Washington Times writes, in turn, the transfer of fighters to Syria is a signal for Turkey: Su-35 together with C-400 gives Russia the opportunity to protect their aircraft anywhere in the Middle East region with weapons that surpass NATO weapons. 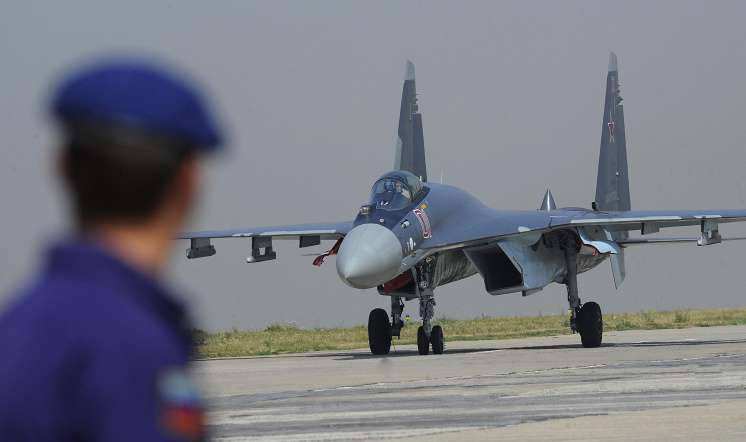 As TASS was told by the former head of the 4 th center for combat use and retraining of flight crews of the VKS in Lipetsk, Major General Alexander Kharchevsky, the newest Su-35 fighters will not only be tested in the combat conditions of Syria, but also contribute to the destruction of the ground targets of militants.

According to the general, the Su-35, as well as the previously sent to Syria, the Su-30CM, are capable of "equally efficiently solving tasks for both air and ground targets."

Su-35, using ultra-high maneuverability characteristics when conducting air combat, in which he has no equal, can equally well use means of destruction on the ground

Another goal is to transfer the latest aircraft to Syria - test them in combat conditions. They are "very important from all points of view."
This opportunity to "see and test in the case" our new aircraft could not be neglected, and it is fully used 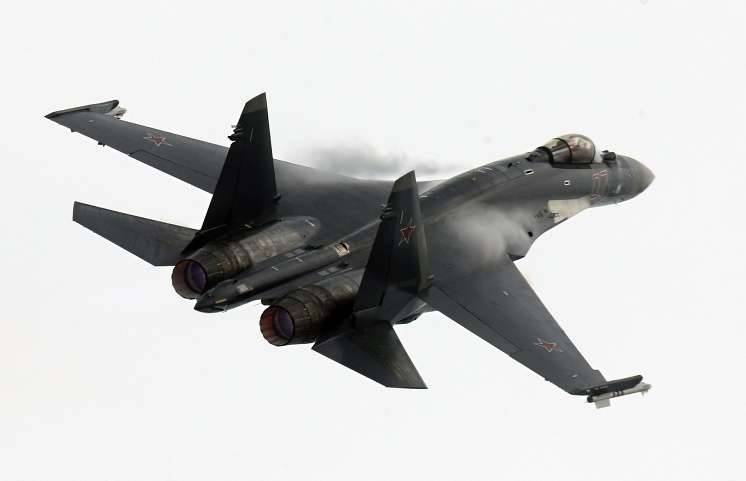 The Russian multi-purpose supersonic super-maneuverable Su-35С fighter belongs to the 4 ++ generation. It was developed in the 2000-ies experimental design bureau to them. BY. Sukhoi based on the Su-27 front-line fighter. The first flight of the Su-35 made 19 February 2008, the plane was piloted by honored test pilot of the Russian Federation Sergey Bogdan.

Since 2011, the fighter is serially produced at the Komsomolsk-on-Amur Aviation Plant named after Yu.A. Gagarin (KnAAZ).


19 November 2015, the state-owned corporation Rostec, announced the conclusion of a contract for the supply to China of 24 Su-35 fighters, and the People's Republic of China will be the first foreign buyer of these aircraft.

The aerodynamic layout of the aircraft is made in the form of a twin-engine, high-winged, three-bearing retractable landing gear with the front desk. Su-35 is equipped with turbojet engines with an afterburner and an in-plane thrust vectoring AL-41F1С developed by the Saturn Research and Production Association (Rybinsk, Yaroslavl Region).

For the super-maneuverability of the Su-35 meets the engine 117C. It was developed on the basis of its predecessors, the AL-31F, mounted on Su-27 airplanes, but differs from them in an increased ton 14,5 (against 12,5), a long resource and lower fuel consumption.

On the Su-35 - 12 external suspension nodes for mounting high-precision missiles and bombs. Two more - for the placement of EW containers.

The Su-35 armament includes a whole range of air-to-air and air-to-surface guided missiles, as well as unguided rockets and air bombs of various calibers.

According to the nomenclature of the bomber and unguided rocket armament, the Su-35 as a whole does not differ from today's Su-30MK, but in the future it will be possible to use improved and new models of bombs on it, including with laser correction. The maximum combat load weight is 8000 kg. 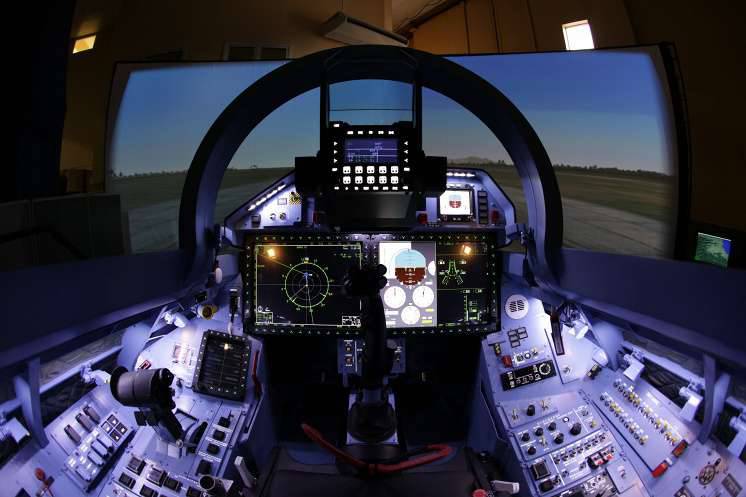 From the fifth generation aircraft to the Su-35 cockpit. Unlike the Su-27, it does not have analog devices with familiar arrows. Instead, there are two large color LCD screens. Therefore, on it, as in a conventional TV, in the "picture in picture" mode, all the information necessary to the pilot is displayed.

Also on the Su-35 for the first time is a domestic inertia-free navigation system - SINS. This is an electronic-mechanical device, without which no fighter today can not be considered modern. His task is to collect and analyze all flight information and to ensure the departure and return of the aircraft to its aerodrome.

In addition, the fighter is a promising radar complex with a phased antenna array "Irbis", which has unique characteristics to date in terms of target detection.

The name of the Su-35 was originally worn by the modernization of the Su-27 front-line fighter developed in the 1980s. and subsequently served as the basis for the experimental super-maneuverable Su-37 fighter (the project is closed, the developments are used to create the "new" Su-35 in the 2000-s.).
Su-35С - the main modification for the video conferencing of Russia. Unlike the "original" Su-35, in particular, it does not have a front horizontal tail and brake flap.

The Su-35C fighter was the final stage before the appearance of fifth-generation T-50 fighters (PAK FA) in the Russian Aerospace Force. It is planned that its mass production should begin in the 2017 year, and at the same time the plane will begin to enter into service with the combat troops of the Russian Federation Air Force.
But even with the T-50, the Su-35C fighter will be a very effective combat vehicle with great modernization potential.

Ctrl Enter
Noticed a mistake Highlight text and press. Ctrl + Enter
We are
What you didn't want to know about EnglandInterview by President Bashar Al-Assad to the Sunday Times
214 comments
Information
Dear reader, to leave comments on the publication, you must to register.