February 5 2016
21
German project tanks The E-series (from Entwicklung series, development) was an unrealized program for the creation of experienced German tanks during the Second World War. Within the framework of this series, 5 combat vehicles unified in details were to appear from the light reconnaissance tank E-10 to the super-heavy tank E-100 weighing up to 130-140 tons. It was the work on the E-100 tank that advanced the farthest. The British even managed at the end of the war to capture the hull of the tank without a tower, which was taken to the UK for comprehensive tests. Most likely, they also built, but disappeared in January 1945, in the crucible of the Soviet offensive, the 3 hulls of the experimental batch of the E-25 tank, which, in essence, was an anti-tank self-propelled gun.


Despite the fact that by the beginning of the active development of the tanks of this project, the situation on the fronts of World War II for Germany had seriously deteriorated, the country began to experience an acute shortage of raw materials and materials for industry, and the release of new tanks in such conditions became almost unrealistic, the design work in this the direction was quite intensive. In this case, the priority was more likely to create sketches and develop solutions for new nodes, mechanisms and the creation of drawings in the form of a reserve for the future. For this reason, the initial work on the projects of the E-series tanks was transferred to firms that had not previously engaged in the development and production of tanks, so as not to distract the main production facilities that had long been working only for the needs of the front, increasing the production of existing tanks, assault guns, fighters tanks and ACS.

The release of all E-series tanks was planned using standard units that would fit all series tanks. In total, this program covered 5 tanks, while opening its E-10, the combat mass of which was supposed to be about 10 tons, was to become a small reconnaissance tank, but during the development process has become a classic PT-SAU. As in the case of the rest of the designed E-series armored vehicles, the Ministry of Arms and Ammunition wanted to get the most unified combat vehicle at the output, which would have excellent operational qualities. At the same time, the production of E-10 was planned to be made as technologically advanced as possible and does not require large amounts of resources and labor costs. 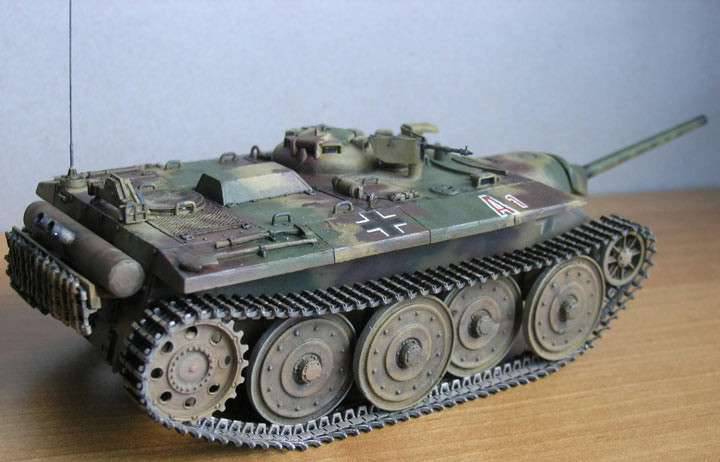 The technical task for E-10 was finalized only in 1944 year, while none of the major German tank-building firms could not submit to the military project that would satisfy them. As a result, preference was given to the company Klockner-Humboldt-Deutz (KHD). Prior to working on the E-10 project, this company had never engaged in the development of armored vehicles. Up to this point, all acquaintance of the company’s engineers with tracked vehicles was limited to serial production of RSO (Raupenschlepper Ost - Vostok tracked tractor), where the concern designers installed a gasoline engine of their own design instead of the Steyer engine.

E-10, as well as heavier anti-tank ACS E-25, may to some extent be the response of the Wehrmacht Army Armaments Office to develop the American light-armored anti-tank self-propelled gun M18 "Hellcat", which could speed up to 90 km while driving on the highway / h, while the weight of the machine was 17,7 tons. In February 1944, the Allies tested their novelty in Italy. After the start of the design work on the E-10, the Army Armaments Directorate notified the design team of Hans Hasselgruber, working on the project, about the need to maximize the speed characteristics of the combat vehicle being created. As a result of the applied technical solutions, if implemented in metal, the E-10 tank destroyer could reach speeds of up to 65-70 km / h while driving on the highway.

Specialists of the KHD concern have been able to offer a simple, but at the same time effective solution within the framework of the E-10 project, which in some way echoed the Hetzer tank destroyer, in fairly limited time. Group engineers, working on their project, have taken the following steps. First of all, to save the mass of the developed machine and reduce the number of parts used, they decided to abandon the use of the tower. Another advantage of “turretlessness” was a reduction in the overall height of the vehicle, and hence an improvement in its invisibility on the battlefield. As a result of the design work, the case of a rather simple form was obtained by a very good inclination of the upper frontal armor plate. As the main armament was planned to use 75-mm anti-tank gun PaK 39 with a barrel length 48 caliber, which has already managed to establish itself very well in combat. The same gun was installed on the Hetzer. The breech of this gun was covered by the standard mask for the Germans of the gun, which received the nickname “pig snout”. 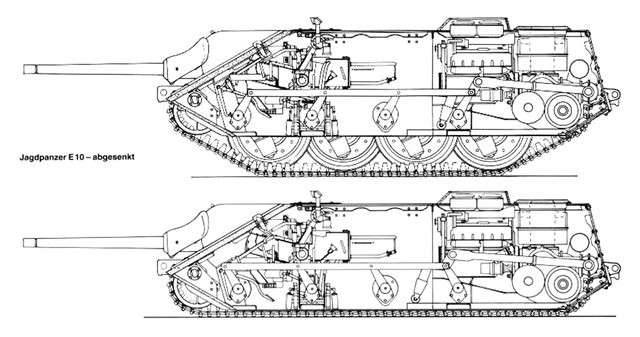 Due to the rather tight size of the car, which was quite compact and limited to the planned weight, the engineers of the KHD group abandoned the layout of the standard for German SAUs and tanks - now the hydrodynamic transmission had to be located behind the power plant, which simplified its dismantling, as well as technical service. The choice of such a transmission layout also allowed an increase in the combat compartment of the vehicle. At the same time, the engine compartment and the rear armor plates of the tank destroyer were planned to be completely removable, so that the technicians always had the opportunity to dismantle the engine and transmission as a single unit. Although the initial designation of the E-10 implied a weight of about 10 tons, the mass of the new combat vehicle in the design process grew to 16 tons. It should be noted that the mass was not maintained for almost all the designed machines of the E-series. The crew of the E-10 was to consist of three tankers: a driver, a commander and a gunner.

The small height of this anti-tank self-propelled gun and the simple form of the hull made it possible to carry out its frontal booking of only two armor plates: the top (60 mm thick, it was located at an angle 60 °) and the bottom (30 mm thick, it was also located at an 60 ° angle). Both front sheets were welded just below the cannon placement line. The use of such a design solution when building a hull made the E-10 much more technological than the most massive self-propelled Wehrmacht self-propelled machine - StuG 40 Ausf.G, which was distinguished by a much more complex geometry of frontal parts. The on-board booking of the tank destroyer was formed from armor plates 20 mm thick, located at an angle 10 °, stern armor plates also had a thickness 20 mm (angles of inclination 15 ° and 33 °, respectively), the bottom and roof of the hull were made of armor sheets with a thickness of only 10 mm.

As a power plant, the Germans considered two possible engines. The first was the Maybach HL 100 with water cooling, this engine developed maximum power - 400 hp. The second option was an Argus air-cooled engine with horsepower 350. At the same time, after installing the advanced cooling system and fuel injection, the power of the Maybach HL 100 engine was increased to 550 hp. at 3800 rpm. Both engines were planned to be placed in the back of the self-propelled gun, so that they had no effect on the shape of the hull and the placement of the other units. Interesting technical solutions included a combined system of steering and hydrodynamic transmissions developed by Voith. 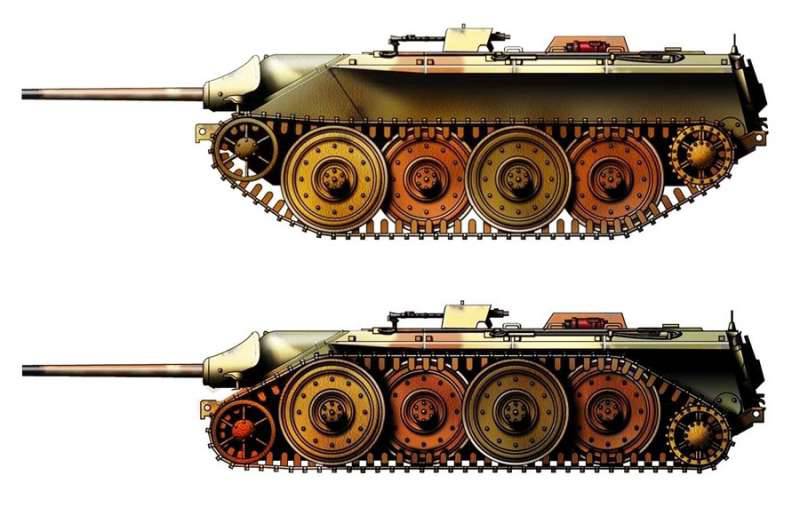 Like all designed E-series German tanks, the E-10 had a longitudinal torsion bar suspension using Belleville washers. Such a suspension system was designed by the designer of the company MAN, Doctor of Technical Sciences Lerom. The refusal of engineers from the transverse torsion bar suspension, which was previously used on all the machines, the development of which Knipkamp had to do, made it possible to achieve an increase in the internal net volume of the combat vehicle. In particular, thanks to this decision, an additional evacuation hatch for the crew members was to appear at the bottom of the E-10. The support rollers of the tank destroyer were staggered, which immediately revealed her involvement with the head of the Sixth Department of the Army Armaments Directorate - this arrangement of the rollers was Knipkamp's “calling card”.

The undercarriage of the E-10 self-propelled gun consisted of four rubberized road wheels (on each side), front guide wheels, rear leading wheels and a small track track. The diameter of the rubberized rollers was 1000 mm. The support wheels alternately overlapped each other and were mounted in pairs to the left and right of the single-row tracks of the track track. One of the main features of this combat vehicle was the ability to change the clearance, which could vary from 1400 to 1760 mm. That is, the E-10 tank destroyer could literally “sit down” on the spot and fire at the enemy from the most inconspicuous position, using high grass or a low bush as a disguise. However, such a “low landing” made the shooting itself difficult, the Soviet paratroopers would face the same problem in the future, who had to use the ASU-57 self-propelled gun, whose height was only 1,5 meters.

The KHD company’s E-10 Tank Destroyer project, in its military form, was considered worthy of attention, however, further work on this project was stopped after only a few months. The reasons for this were more than enough. Initially, the tank developed in this category was supposed to have a mass of about 10 tons, but its design weight increased to 16 tons (about the same weight as the Hetzer). In addition, the absence of the tower was both a plus (camouflage, low silhouette), and a serious drawback, making it impossible for the car to carry out a round-up attack without turning the whole hull, and the proposed suspension and transmission were not mastered by the German industry. It is also worth considering the fact that the project was considered in the second half of 1944, when the situation on the fronts began to take on a catastrophic character for Germany. At this time, the Wehrmacht needed as many tanks as possible. At the same time, the launch into production of a new tank destroyer could lead to some delays in the production of machines of this class, since the plants could take time to master the production of new equipment. Such a delay in the production of armored vehicles was extremely undesirable. 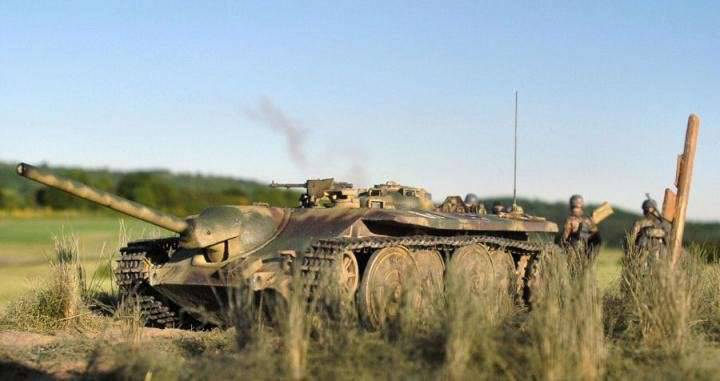 With all the visible advantages, the E-10 tank destroyer would have encountered a large number of obstacles when introduced into mass production. Taking this into account, the German military decided to opt for PzJag.38 (d), known as Hetzer. This light tank destroyer, built on the chassis of the obsolete light Czech tank PzKpfw 38 (t), fully occupied the E-10 place. At the same time, during the Second World War, not a single prototype of the E-10 was ever built. This project, like many of the engineers of the Reich of the second half of the war, remained forever only at the level of draft designs.

Ctrl Enter
Noticed oshЫbku Highlight text and press. Ctrl + Enter
We are
About towers on pedestals, and not only ...E-25: failed tank destroyer
21 comment
Information
Dear reader, to leave comments on the publication, you must to register.