Why Russia is unique 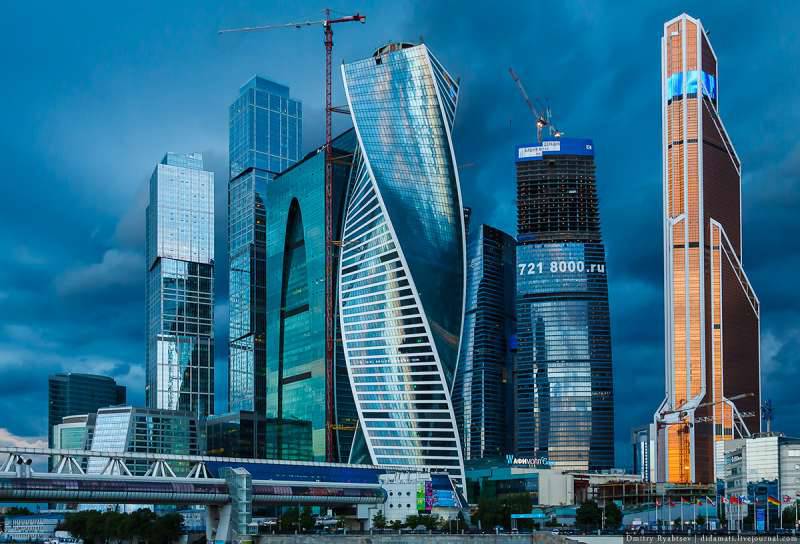 This will not remember at the economic forum in Davos. This did not notice (or try not to notice), several leading economists. The consequences are aware only investors, but even they do not try to study the problem.

Five-million metropolis of St. Petersburg is at a latitude of 60 c. north of the equator. On the reverse side of the Earth, at the same latitude, it extends only uninhabited territories of northern Canada and the rare villages with speaking names like Uranium City.

In the southern hemisphere at this latitude there is nothing. The American continent ends at 55 th degree. w. (Cape Horn) for 65-th degree meet Antarctica.

Africa and Australia are located much closer to the equator — their southernmost (i.e., coldest) edge is located in the tropics (35 ° S lat.).

New York and Chicago are the latitude of Turkey. This is the most northern US cities.

No less favorable position was taken by China. Half of its territory is located at a latitude south of the African countries of Tunisia and Morocco. 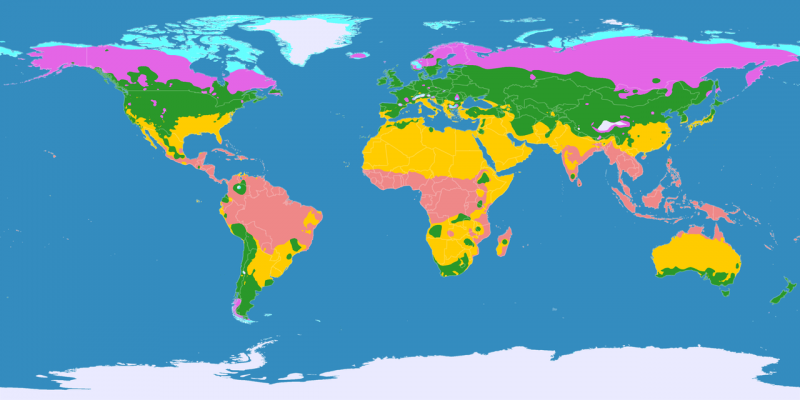 Location climates also depends on the latitude. European climate is softened by the warm ice-free ocean. Scandinavia warm Gulf Stream. Because a typical Norwegian house has a single window frames, and Finland put strawberries in the open field.

Historical the "absolute minimum" in Bergen (Norway) and Turkish Istanbul is the same (–16,1 ° С), and the inhabitants of London do not know what frost is minus 10.

The farther to the east, the angrier and longer become winter, temperature fluctuations are amplified. Sharply continental climate is exacerbated by extreme northern location areas.

Of all the countries 297 Russian climate severity unconditionally comes out on top. The coldest country in the world!

For the first time this ingenious guess was voiced by the well-known domestic journalist Andrei Parshev, retired colonel of the FPS. Comparing the obvious facts, he received a harmonious theory. The essence of which consists in the fact that the development of the domestic economy is entirely subordinated to irreducible natural-climatic anomalies in most of the country. It is precisely because for us entry into the WTO is destructive.

Any production in Russia is characterized by a monstrous level of costs.

When the temperature of the outer casing of any unit in 100 ° C, the heat loss in the Ural winter (–30) will be twice as high as that of a similar unit somewhere in the tropics (+ 30). In such conditions, try to maintain the desired temperature inside the distillation unit in height with a multi-storey building. What will be the difference in losses and costs compared to a similar plant in the United States?

Thick walls, massive foundations and heating systems of domestic factory workshops (as compared with an asphalt ground and a tin pavilion somewhere in Malaysia) eloquently indicate to investors the need for serious investments. With minus 20, everything becomes literally a problem. Heating of a tank with a chemical product or unloading of a wagon with frozen coal. The only profitable production - freeze dumplings.

Other things being equal the cost of any goods produced in Russia is higher than in any country of the world. That automatically makes it uncompetitive in the global market.

In the context of the free movement of capital, no investor, nor our or foreign, will not invest in the development of production in Russia. Much of his money invested in Russian industry, will be spent just to fight the adverse conditions, without any benefit to the final product. If you do not understand the investor understands the banker gives the investor a loan and check its business plan.
A. Parshev “Why Russia is not America”.

Russia will never be a cheap “assembly factory” like Malaysia or China. But, even more surprisingly, it is not profitable for the West, even as a “raw materials appendage.” What it is explained by two factors:

Drill a hole in the Saudi Peninsula, fit a tanker - and send a batch of oil to anywhere in the world. The climate as in the resort in Dubai, deposits on the coast, transportation by sea (the most profitable of all types of transport).

What does this look like with us? Thousand-kilometer pipelines, tundra, taiga, midge in summer, bitter cold in winter. From the vegetation only moss, all the hope of the happy inhabitants of those places on the “northern delivery”. Even more absurd mining on the Arctic shelf. Ice, icebreakers, storms, zero visibility, polar night, winter 12 months of the year.

In Europe, there is always a demand for hydrocarbons. But as far as cost-effective production of oil in the Far North? What is laid down in the draft percentage of profit? Especially when the prices of oil in the region of US $ 30. Per barrel.

Russian coal mining looks no less tough. From the depths of the Kuzbass mines - through the whole of Siberia and the Far East, under the rest of the car wheels. 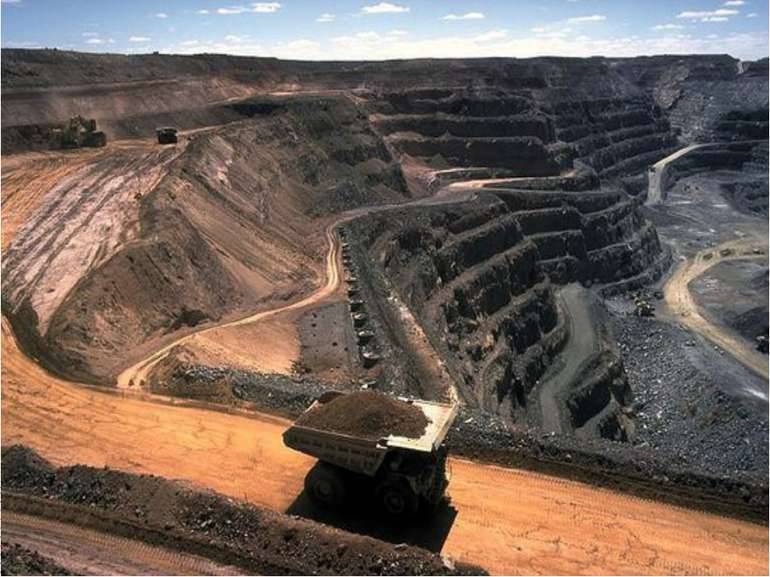 Coal mine in Australia

How should this look ideally? Extraction by open pit, coal mined on the warm Australian coast. With the subsequent transportation by sea - no problem, anywhere in the world.

Moral of the story: there is always mine in the world, whose development is easier and more profitable than the development of domestic mines in appalling conditions in Siberia and the Far North.

- Why are there two heads and three crowns on the Russian coat of arms?
- One head to the west looks, the other to the east, but its not.

With all the disagreement with some of the views of Andrei Parshev, it is necessary to recognize that his theory about the impossibility of “integrating” Russia into the world economy on general terms has the right to life. The facts cited by the author and the subsequent logical conclusions at least do not contradict the observed reality.

Russia can neither be an “assembly factory”, nor a “raw materials appendage.” We must find our recipe for survival in this world.

All of the above in varying degrees, is true for any country. Every nation tries to make the most of its geographical position. Whether it is the Anglo-Saxon naval civilization, Saudi Oil rocking loafers or transport in Singapore node at the intersection of the trade route from Asia to Europe.

About the only possible way of development of win-win for Russia mentioned more than once.

The path to success lies in the field of high technologies. In the creation of unique products with high degree of processing, when the cost of raw materials and production costs play out against the backdrop of the cost of the final product.

Bet on the fact that the Russians are the best. Space, peaceful atom, export weapons. Invest in the development of the aviation industry, shipbuilding, IT-sphere, creating unparalleled products. Out of competition.

Medicine, biotechnology, engines, production lines, machine tools. Alas, instead of efforts to create plasma etching installations for microcircuits, we preferred to swarm in black sticky dirt. Which also managed to fall three times in price over the past year. In their wretchedness, the participants in the “anti-crisis forums” are like Papuans, gathered under a dried palm and waiting for the coconut to ripen. What is more important to build - “North” or “South Stream”?

Over the previous decade, these “downshifters” have put 3,5 trillions worth of hydrocarbons for export. dollars, of which oil per trillion 800, another trillion oil products, about 800 billion amounted to exports of natural gas. And now, with the price of oil in 30 dollars, they, of course, have no money for anything.

Russia, in contrast to Malaysia and Zimbabwe, had no luck with the climate, but were lucky with the people inhabiting it. The nation opened a radio and an incandescent lamp. It paved the way mankind into space. Create a TV and a helicopter. What kind of technologies we can offer in the new century to take its rightful place in the world? ..

Book Parsheva Andrew came back in 1999 year, but unfortunately, since it was not made any conclusions.

Ctrl Enter
Noticed oshЫbku Highlight text and press. Ctrl + Enter
We are
Russian-Moroccan Relations: Past and Present20 years after the war in Bosnia 1992-1995: rare photos of the conflict
283 comments
Information
Dear reader, to leave comments on the publication, you must to register.