Tricky comments. Do not hold us for suckers, Crimea will not give up


"And there was a veche in the capital city, and good people gathered at the veche, thoughts to think ..." No, not that way.

“The real authorities gathered at the skhodnyak, to talk a little for things ...” Not the same, although closer to the topic. Well, it will have to be simple.

Although with some stretch, it is quite possible to call what the MEPs arranged, skhodnyakom. It's not about the title, but still the results. The results are peculiar.

What is it about, actually? This is a resolution of the European Commission in Strasbourg, "The situation with human rights in the Crimea, in particular the Crimean Tatars." The adoption of this was voted 472 MEP, against - 79, abstained - 33. 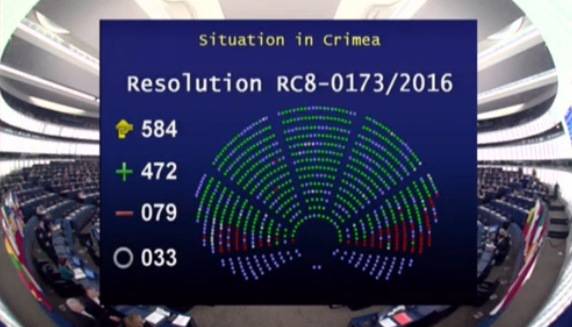 Well, not bad. In the European Parliament there are already 79 people who can really live in the future. And 33 people represent that they are from those who can do it. Not bad indeed.

The resolution, of course, is a recommendation. For not a single executive body in the European Union is obliged to fulfill what the European Parliament leaders are cooking in their boiler. And that bread, as they say.

So what is the resolution about? It is a question of sanctions in exchange for the Crimea, neither more nor less.

“Restoring Ukraine’s control over the peninsula is one of the conditions necessary for the resumption of cooperation with the Russian Federation, including the suspension of the relevant sanctions,” the text of the document says.

The key word, by the way, is "suspension." For those who did not immediately pay attention. Remove the sanctions and suspend - feel the difference, huh? That is, Russia must return the Crimea to Ukraine, and in Europe will stop the sanctions. Well, we have already seen with Iran’s example that sanctions can be lifted, and in a couple of hours we can again impose. Passed stage.

The authors of the resolution condemn the violation of the rights of the Crimean Tatars by the new authorities of the Crimea. Russia is criticized for “severe restrictions on freedom of expression, association, and peaceful assembly.”

The document also states that the majority of the Crimean Tatars "opposed the capture and boycotted the so-called referendum on March 16 of the year 2014". The European Parliament calls for the Majlis of the Crimean Tatar people to be respected as the legal representation of the Crimean Tatars community, and also recommends avoiding persecution of its members, including Mustafa Dzhemilev, Refat Chubarov and Ahtem Chiygoz.

Where is it, this is the majority ... Who saw it ... Where, the most important thing? And, probably, there, where power transmission lines tore. And trucks with food at the border stopped. We, by the way, representatives of the Crimean Tatars are very much respected. Moreover, according to the letter of the document if, then in Russia each Crimean Tatar is the legal representative of his people. It is the Crimean Tatar. Not Buryat, not Avar, not Komi. So it happened.

Another issue is that terrorists do not really like us. More precisely, favor, but not as in Europe it is customary. It is there that they are given free housing, the allowances are paid ... No, we also provide and maintain housing. In prisons. But what to do, a barbarous country. As Europe can not yet. Although we are trying. Yes, sometimes it turns out not very, they are dying in our zones. But this is exclusively from the harsh climate in Siberia.

The authors of the resolution lay on us, that is, on Russia, the responsibility for the security of the Crimeans, the observance of the rights of cultural, religious and sexual minorities of the peninsula. Indeed, as without sexual minorities today? I don’t know how many there are in Crimea, and the European Commission does not provide data, but even if there are five, then their rights are unequivocally violated in the most cruel way. Sadomasochically.

Of course, the resolution of the European Parliament does not mean the refusal of the EU to negotiate with Russia on easing the sanctions regime. Now the European parliamentarians share the whole process. On two tracks. The first is the Crimea back. The second is the complete discharge of Donbass, the withdrawal of all Russian troops from there, and so on.

“The convergence of positions and the gradual lifting of European sanctions may well occur on the second track. European politicians have repeatedly confirmed that this will happen if the Minsk talks on conflict resolution in the east of Ukraine are promoted, ”Dmitry Danilov, head of the European Security Department at the Institute of Europe, RAS, said in an interview.

And again: "it can happen" and "happen" - two big differences.

Total: something new. The plowmen in the Malyava all lucidly interpreted, and who did not understand - that is to himself a vicious zombie. Crimea and Donbass to Ukraine, gays and other LGBT people for increased nutrition, Chubarov and his chums are a complete amnesty and an order for somewhere else. And then (quite possibly) the sanctions will be lifted (for a week or two), and Russia will have complete happiness and prosperity.

Tell me, who is still a bigger fool? The one who wrote the resolution, or the one who believes?

Seriously, the fact that sanctions will ever be lifted in exchange for Russia's fulfillment of such requirements is hard to believe. Not for it imposed. And then, if you suddenly take and return the Crimea, then for the whole West of Peremoga there will still be that. And immediately all sorts of Norway will be drawn with the desire for a piece of shelf, Japan with islands, Sweden with Kemskaya volost ... Those who want are more than enough.

In Europe, they clearly do not understand that all their jumps and grimaces look ridiculous. Yes, we can laugh. In different ways and for different reasons. And today it is not always laughter to laugh, yes, it’s not very pleasant to live with sanctions. But it’s better to live like that, with the Crimea, than without it, having bought another Euro-fairy-tale. And since we have overlaid them so much, one thing is the "non-expansion of NATO to the east" which is worth.

So the divorce is not rolled, alas. At this time, just do not buy. Hang out there in Strasbourg. And to us, and in Sevastopol, it is quite an excellent.

Ctrl Enter
Noticed oshЫbku Highlight text and press. Ctrl + Enter
We are
Russia, Turkey and the "Crimean Question"Results of the week. “We won't give you the keys! We're not Pinocchio! ”
121 comment
Information
Dear reader, to leave comments on the publication, you must to register.