Are we starting a hysteria in the “Russian go” style again?

February 5 2016
66
And again, the British TV channel BBC. This time, though, the Air Force-2, but is there a difference in numbers? The main thing is the essence. And the bottom line is that the British journalists from television journalism launched an absolutely provocative broadcast and an equally stupid reality show with the big name “World War III. View from headquarters.” 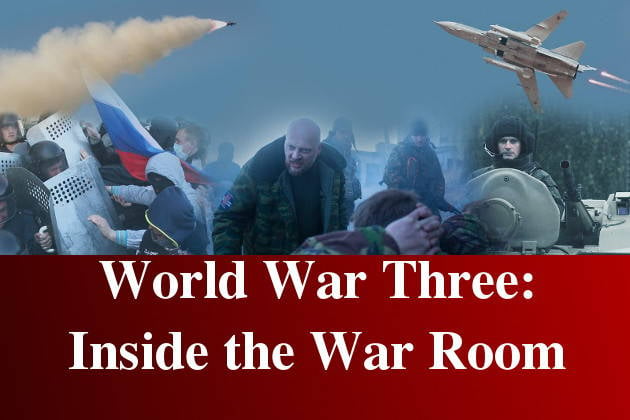 Naturally, Russia is the instigator and aggressor in the third world war. There are no options. And, in fact, the point is not even in the fact that in the frankly weak scenario that television creators from the Air Force made, Russia is unleashing a war. This will not surprise anyone today.

The very fact that a fantastic plot, invented incomprehensibly under the influence of what means, is discussed on the air by very specific people. Those who occupied, I note, earlier, very high posts. Former ambassador to Russia Tony Brenton, former ambassador to the UN Christopher Mayer, former chief of staff of the British Navy, Admiral West and other former, but no less senior officials in the past.

It is surprising some ease with which a half dozen famous people in Britain rushed to discuss the plot. And here, apparently, it's not about fees. The member of the House of Lords, Baroness Faulkner, has an exact order with money. Although, to be honest, she looks the most adequate in this company.

Let's return to the plot. Russia is organizing some unrest in the territory of Latvia and Estonia with the help of the Russian-speaking population. What for? To (attention!) To separate in their favor the territory and population of these areas. A sort of Ukraine number two.

An interesting idea of ​​our Baltic micro-neighbors. If you thoughtfully try to understand what is bungled, then it turns out that on the territory of independent states there are entire reservation areas in which there are some Russian-speaking elements who sleep and see that they will live in Russia. Nothing like?

Crimea smacks? Oh yeah! According to the full program.

Well, the main question that the participants of the show are discussing: how can Latvia help? She is a member of NATO, anyway. And the actors playing in the show the role of representatives of the same Latvia and (of course, as without them!) The USA, with might and main hurry the participants with making decisions.

And naturally, NATO is being drawn into this "conflict." You know, if only actors were participants of the show, it would not look so disgusting. But, alas, on the screen are people who most recently determined the military policy of Britain. And from their mouths, Russia is an unconditional enemy, with whom one should not stand on ceremony and in respect of which nuclear power can be applied. weapon. And not just possible, but even necessary.

The main vile "highlight" of the film show is the inclusion of real, non-fiction episodes. There are enough game episodes, but we are dealing with the most despicable thing — when documentary inclusions are included in the big lie, which make the viewer treat the fantastic brew as real-world events. Indeed, in fact, the channel of the Air Force-2 is famous for the fact that its programs discuss real events and use documentary footage.

And here is the documentary footage. From Ukraine and New Russia. What gives a frankly fictional story some claim to documentary. But agree, and how much should an ordinary British man in the street? Yes, "sniff the cork and look at the pineapple" - and the client is ready, as they say. A bit of Russian mate, real footage of fighting in the Donbas, Kalashnikov assault rifles among combatants. Yes, and a few frankly unshaven and tanned faces in the frame. Enough. And some "understatement" of the participants plus frank statements on the topic "how to save Europe from the Russians".

On the one hand, the conflict is invented from beginning to end. But at the same time, television strategists are thinking how to resist the real president of Russia. And stop Russia, seeking to seize the territory of its neighbors.

Admiral West: "Destroying control objects in Moscow with a missile volley of one submarine will not be enough. You need to send a second boat to the combat area. This will be a good warning."

How can I comment on what was said? Differently. Even considering the frankly fantastic show. But it is not said by an actor. This is said by the admiral. I do not presume to judge how seriously West took this, but it doesn’t look funny on many points.

Perhaps it would not have been so sad if it were another Hollywood blockbuster. But here, alas, there is a serious analytical channel specializing in the discussion of real world problems.

So we have the fact of forcing anti-Russian hysteria in the best traditions of the Cold War. Again creating the image of the enemy. And again in the face of Russian. And again, very, very famous people take part in creating this image.

Yes, a nuclear strike on the script was dealt. Naturally, Russia. On the ships of the NATO group. But for some reason, the “experts” in the program are discussing not a retaliatory strike against Russian ships or military installations, but against cities. And discuss violently and painfully. Good figure, is not it?

Obviously, one thought still exists in the brains of participants who are firmly stuck in the 60-70 years of the last century. The fact that Russia is an enemy, and it is necessary to destroy not only its military potential, but the entire population. What they can and congratulate. And we answered - with such, if I may say so, "partners."

Two aspects are surprising. Namely, with what ease in Britain the former high-sitting ladies and gentlemen rushed to create the image of the enemy. And the second. For some reason, no participant in the show has the idea that things can “fly in with greetings” from Russia are much more serious than those carried by three British submarines of nuclear deterrence forces. And what are these three submarines for the Russian army.

One gets the feeling that Britain is somewhere near the center of the Earth. Or on the back of the moon. And so you can safely discuss how two of the three submarines at once will sweep away all the military power of Russia. Well, under the gin and tonic, it’s quite a ride.

Yes, the tale on the Air Force-2 came up with all the heart. Both former and retired leaders joined in full. But a fairy tale is a lie, but there is a hint in it ...

Of course, it is a pity that such a well-known and respected (not without reason) channel, like the Air Force, began to slip into the maelstrom of political order. It is a pity that without having any more or less reliable justifications, from Russia they began urgently to sculpt the image of the enemy of all humanity.

But by and large, we will not have to regret it. What a bit of consolation. How can the British be comforted by the fact that soon they will have no time for Russians in the Baltic States. They have enough of their own. Similar to those from the movie. Dark, bearded, well aware of how to use AK.

So it’s not worth waiting for the Russians. You, dear British, enough of their own. British, German, French. It is clear who we are talking about.

And we definitely will not touch Latvia. In full accordance with the eternal Russian harmfulness and unpredictability.

Ctrl Enter
Noticed oshЫbku Highlight text and press. Ctrl + Enter
We are
Results of the week. “We are starting our next show“ From the Life of Ghosts ”Heroes are not our war
66 comments
Information
Dear reader, to leave comments on the publication, you must to register.