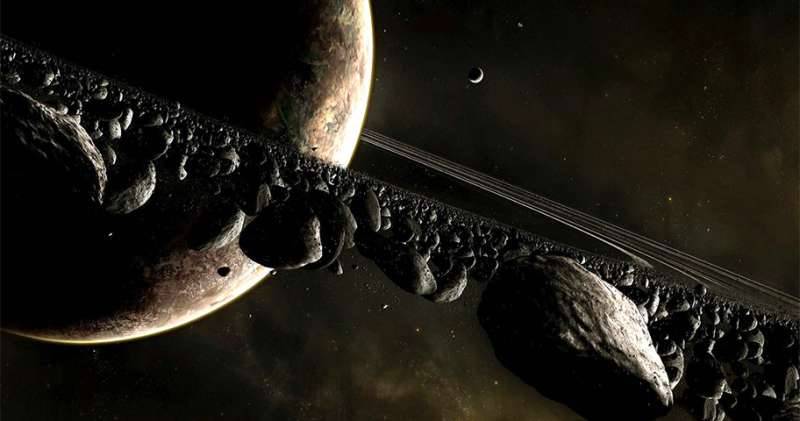 Press conferences in Luxembourg were eagerly awaited both by people professionally involved in politics, economics and finance, and ... fans of science fiction and space. But something even more strange is that it may be of interest to sociologists, those who follow the labor market, and also the world economic cycles.

The Deputy Prime Minister of the Grand Duchy of Luxembourg, Etienne Schneider, announced 3 in February at a press conference about the start of the industrial asteroid exploration program. Translated into a more understandable language, this means that the Luxembourgers intend to mine valuable and rare minerals on asteroids and other space bodies.

Luxembourg is not a newcomer to space exploration. The Duchy played a prominent role in the development of satellite communications in the nineties of the last century. One of the largest global satellite operators is the Luxembourg company SES.

It is SES that, together with partners from the United States and European countries, will master asteroids and other space bodies in order to extract from them rare metals on Earth. At a press conference in Luxembourg, attended by representatives of the American companies Deep Space Industries and Planetary Resources, who will be partners of Luxembourgers.

Jean-Jacques Dordain, who headed the European Space Agency (ESA) until June 2015, and now works as an advisor in the Space Resources program, told the Financial Times (FT): “I am convinced that Luxembourg’s initiative has high potential for both science and for the economy. "

It is for the economy, and for macroeconomics, although the former head of the ESA most likely had in mind the more modest goals of replenishing stocks of raw materials with Luxembourg, whose ability to extract it from its own depths is zero. In the acclaimed book "Does capitalism have a future?" One of the co-authors, the eminent sociologist Randall Collins, logically proves that in the foreseeable future there will be a real technological replacement of labor by machines. It was predicted by Marx, but it turned out to be delayed by 150 years due to the fact that the state and corporations found jobs for those who were driven by high-performance machines from factories. These people, that is, most of us, occupied the office work: the expanded state gave us work in the ministries, such as "labor and social security" or "culture", which in the XIX century under Marx and Engels had never heard of.

Giant corporations have overgrown with office workers who can compete with the state, instead of those modest offices, of which the former industrialists almost single-handedly had a cigar in their teeth and a gold chain on their stomachs. Innovation required many engineers who developed individual machine parts. This whole army of employees, specialists and skilled workers in semi-automated factories constituted the middle class.

But now office work is being supplanted. The computer itself has not yet generated unemployment, most likely creating new jobs in the same offices. But in developed countries, these places are becoming less and less, because modern methods of processing information still crowd out people. And the plants from the semi-become just automatic. The question arises: what to do with approximately one billion people of the world middle class, when will he remain without work?

Collins gives his answer - socialism. Not categorical, but probabilistic. Yes, it is possible. The government’s semi-coercive labor force management for employers and employees is able to temporarily silence the problem. But it is hardly possible to solve it in principle.

But just the birthplace of socialism gave another potential response to modern challenges, paving the way for mankind into space at one time. And then the answer to these challenges is: space. Its space is capable of absorbing labor resources, calculated not by a billion, which by terrestrial standards seems to be a lot of disbelief, but by infinite quantities. The mastering of asteroids in scale does not seem to be too laborious, but how is it to master Mars? Yes, and asteroids, which flies a great many, are able to attract labor in the scale of the entire modern earth's mining industry. But you still need to take into account the earth infrastructure, and the maintenance of space communications. So the popularity of "Star Wars" can be explained not only by the love of fiction, but also by the fact that mankind is gradually trying on its cosmic fate. Not to mention the popularity of Gagarin.

Is this not the answer to the direction of overcoming the current crisis, which is again acquiring the character of the world? For Russia, such an answer would be as organic as possible. Well, if Luxembourg got involved in space affairs ...

Despite the fact that the extraction of raw materials in space, writes FT, seems to be something descended from the pages of science fiction books, in general, its technology has long been developed. It is already known how to get to the asteroid, how to drill a well in it and how to deliver rock samples back to Earth.

Etienne Schneider did not provide details of the project, because the Luxembourg Parliament has not yet allocated funds for it. According to preliminary calculations, the extraction of rare minerals on asteroids is a very expensive pleasure. We are talking about tens of billions of dollars. However, experts believe that the game is worth it, because the potential volume of a still non-existent market is estimated at trillions of dollars.

Asteroids are made up of materials preserved after the creation of the solar system. They are much richer in minerals of the earth's crust, because heavy metals, the most valuable and rare, as the cooling of our planet plunged to its core.

Extraction of raw materials from asteroids can be of two types. The most valuable metals, for example, of the platinum group, can be delivered to Earth after preliminary processing in space. Other minerals, including iron, nickel and tungsten, can be recycled in space for use in spaceships and instruments for further exploration of the solar system. The resulting water from the processing can be split into hydrogen and oxygen and used in rocket fuel.

The first phase of material extraction in space, exploration, is already in full swing. Deep Space Industries and Planetary Resources are currently working on a spacecraft, with which it will be possible to search for the richest and most valuable mineral-rich asteroids.

In addition to technical and financial problems, companies intending to mine raw materials in space will have to deal with legal difficulties. According to the Treaty on Space, signed by the leading economic powers in 1967 year, minerals in space are the property of all mankind. However, there is no specific mention of the extraction of raw materials on asteroids in the contract.

Last year, the United States passed the Law on the Competitiveness of Commercial Space Launches. According to him, the rights to minerals mined on asteroids belong to American companies. Many experts believe that this law violates the Outer Space Treaty of 1967. However, experts are confident that legal problems are completely surmountable and solvable.

Ctrl Enter
Noticed oshЫbku Highlight text and press. Ctrl + Enter
We are
Nuclear weapons do not guarantee the salvation of the Earth from asteroidsSpace systems of the US military communications: analysis of the state and development
Military Reviewin Yandex News
Military Reviewin Google News
95 comments
Information
Dear reader, to leave comments on the publication, you must sign in.