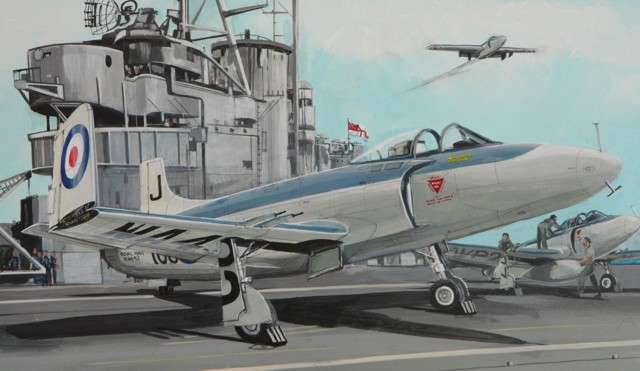 March 4, 1952 became significant not only for the English aircraft carrier Eagle, but also for the entire Royal fleet. On this unusually clear day, the first British jet-powered Supermarine Attacker aircraft appeared on the upcoming long-range cruise airfield. After lengthy tests, marine pilots finally got jet engines into operation for aircraft carriers. One could expect that the “Attaker”, which replaced the piston fighters, will have a long and glorious flight life, and he will take the place of the main combat aircraft of the British fleet. However, a couple of years later, in May 1954, the 800th squadron, armed with these vehicles, was disbanded, and the fighters themselves were decommissioned due to failure and inefficiency. It should be noted that these events caused the company “Supermarine”, known primarily for its famous “Spitfire”, not only material, but also serious damage to business reputation. Until this time, "Supermarine" was associated in the British aviation with power, speed and reliability. And the legendary Spitfire has become for the West a real symbol of victory in the war with Germany. Surprisingly, the unsuccessful “Attacker” for the most part was indebted to the illustrious “elder brother”.

History The creation of the deck aircraft Attaker originates in 1944, when the Ministry of Aviation Industry announced technical conditions (E. 10 / 44) for an airfield-based single-seat fighter, under the prospective Rolls-Royce turbojet engine with a weight of 2200 kg, the future the famous "Nin." For us, it is primarily known for being used on the MiG-15 and served as the basis for the domestic turbojet VK-1 engine.

The well-known firm "Supermarine", then already part of the large aviation concern "Vikkers-Armstrong", developed the project "Type 392", which met the requirements presented in the specification. Work began not from scratch. The chief designer of the firm D. Smith used the experience of creating high-speed wings with a laminar profile, which have already been tested on the Spytful plane, the heir to the legendary Spitfire.

After minor improvements, the wing of the "Spitful" was transferred to a new aircraft. The fuselage was created, as they say, "from scratch", rather voluminous, not very elegant, but allowing you to easily accommodate a turbojet engine with a centrifugal compressor, which had impressive dimensions. The cockpit was located close to the nose, which was to provide a good view ahead. Air for the engine entered through two side sickle-shaped air intakes. According to the “trademark” tradition, the aircraft were located in the wings - two 20-mm cannons “Ispano” in each.

Work on the machine, as they say, was arguing, and even before the work was finished, the prototype of the aircraft got its own name, Attacker. In the summer of 1946, test pilot of Supermarine firm J. Quill lifted the first Attacker into the air. The tests were carried out without any complications, and the company was confident of success. However, due to the end of the war, the need for an aircraft that met the specifications of E. 10 / 44, disappeared. According to the leadership of the Royal Air Force, the reactive Vampires and Meteors, which were already mass-produced at that time, were quite enough to ensure defense capability.

Fortunately, the work of the designers of the company was not in vain. A new specification (E.1 / 45) for a deck fighter with a turbojet engine has arrived. The ground "Vampire", adapted for flying from the deck of an aircraft carrier, was not the solution to the problem of re-equipping naval aviation with jet thrust. The company was made an order for the construction of two prototypes. The aircraft received a new designation "Type 398", but retained its sonorous name "Attacker".

In the design of the machine were made minor changes that did not significantly affect the external appearance of the machine. The aircraft received folding wings for hangar storage, a landing hook, an elongated engine nozzle, new chassis shock absorbers, spoilers appeared on the wings. 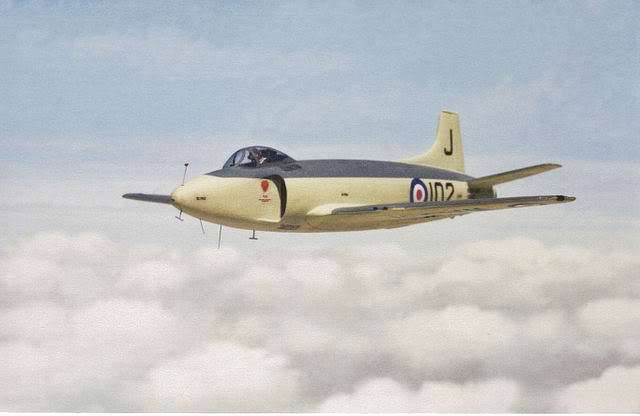 The first deck Attacker took off 17 June 1947 of the year. From September to October, intensive tests were carried out at the Wax Down Airfield, where take-off and landing on the aircraft carrier deck were repeatedly imitated. The tests revealed the low efficiency of spoilers and ailerons, which was also confirmed during the actual landings on the deck of the aircraft carrier Illastries. Aileron usual design, it was decided to replace the slot. From January 1948, test flights resumed, but in July, during landing, the plane crashed and was completely destroyed.

After the loss of the “sea copy”, it was decided to continue the tests of his “land” colleague converted to the “sea standard”.
In general, the fighter turned out to be quite good. The presence of the ventral fuel tank, tested on the first prototype, did not impair the flight characteristics, and subsequently its use became standard for most production vehicles. From the point of view of test pilots, a serious drawback of the car was a difficult piloting technique during takeoff and landing: the outdated landing gear with tail wheel used on the aircraft required very precise, “jewelery” piloting during these phases of flight. The nose of the plane did not give a good view ahead. All this exacerbated the problems caused by the low load-bearing properties of the thin laminar wing, which provided the aircraft with poor handling at low speeds. Thus, the aircraft was not suitable for basing on aircraft carriers.

In October, 1947 began the most important stage of testing for the deck machine - flights from the deck of the aircraft carrier Illastries. The first landing was made on October 15. Flights from an aircraft carrier revealed insufficient strength of some aircraft components. Several changes were quickly made to the design, including increased stiffness of the shock absorber of the tail wheel rack and changed the angle of the brake hook. The intensity and flights from the usual aerodrome did not decrease. In June, 1948, during one of the sorties, there was a catastrophe of the second prototype of the Attacker. The pilot died. It was not possible to establish the cause of the accident, but experts were inclined to think that the rudder was blocked at high speed. By this time, work on the third prototype had slowed down significantly due to a decrease in the interest of the fleet leadership to the unsuccessful, in their opinion, aircraft. At meetings, there was already talk of the need to suspend work. To continue the tests in full, it was decided to modify the first prototype into the deck version.

In addition, even earlier, in February 1948 of the year, the Attacker aircraft (prototype with the serial number of the 409 specification) set the speed record for the flight through the closed 100 km route - 908,083 km / h. Interestingly, this aircraft did not prepare specifically for the record flight. The record was set during one of the test flights, and with a full combat load. This is where the wing with a thin laminar profile and low resistance played a positive role.

Perhaps the record set and had an impact on the fleet command, who made the decision to continue work on the Attacker. However, the main reason for adopting a plane that was unsuitable for deck-based aircraft was the fact that the fleet was in great need of such jet engines, and British designers at that time could not offer any other fighter aircraft other than Attacker. In addition, Churchill had already initiated the “cold war,” in which specialists assigned one of the main roles of jet aircraft, and on the decks of British aircraft carriers there were only piston engines.

Soon, a third copy of the Attacker with a pressurized cabin, enlarged air intakes and a wing slightly shifted back was released from the factory workshop to improve the centering. In November, 1949, a series of machines was ordered, allowing to arm three squadrons. The initial series of "Attackers" modification F MK.1, consisted of 60 aircraft. Machines of this series differed from the prototypes by an increased keel to increase road stability.

The Rolls-Royce "Nin" 3R engines with 2315 kg worked unstably at high altitudes, which limited the practical ceiling of the aircraft. On the last eight machines of this series, a reinforced wing was installed, equipped with nodes for hanging a pair of bombs for 453 kg or 4's unguided missiles for 27,2 kg. So, by order of the naval aviation command, a new modification of the Attacker - the FB Mk.1 fighter-bomber appeared. 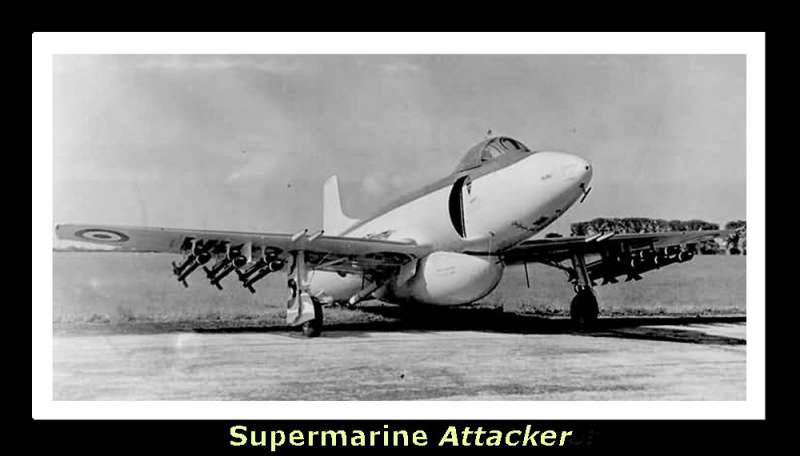 25 January The 1952 of the year began testing a series of 85 machines of an upgraded version of the FB MK.2 with the new Nin 102R engine (the same as before thrust, but with improved altitude). These aircraft were distinguished by reconstructed flaps and a new cockpit lantern. “Attackers” AV Mk.2 could take on board already 12 rockets and, in an overloaded form, launch using disposable solid-fuel accelerators placed in bundles of three pieces on each side of the fuselage under the wing.

The first combatant unit that received the Attacker was the 800 squadron, stationed in 1951 on the basis of Ford, Sussex county. She received the X MUMI 8 aircraft modification. Subsequently, rearming the fighter - the bombers FB Mk.2, the squadron was transferred to the aircraft carrier "Eagle".

In November of the same year, the 803 Squadron was formed, also armed with Attackers. Created in October 1953, another, 890-I squadron, existed incomplete 12 months, after which it was disbanded, and the first two squadrons filled up with its aircraft. 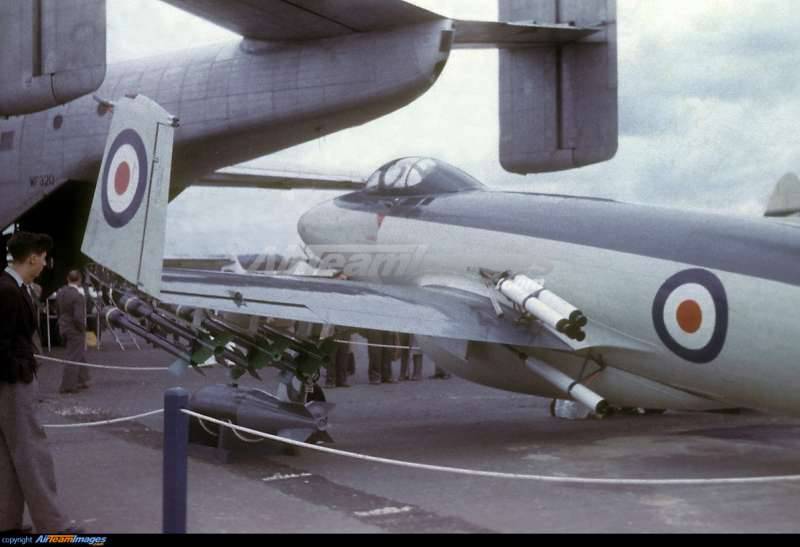 The Attackers served in the first-line units until they were replaced by more sophisticated Sea Hawk carrier-based aircraft. Leaving service in the first squadrons, the F M.I and FB Mk.2 aircraft were operated in the 736 training squadron, and since May 1955, in the reserve units, where they replaced the piston “Sea Fury”. The first backup squadron to receive Attackers was 1831-i in Streetton.

In 1947, the new state of Pakistan emerged in the family of the countries of the British Commonwealth. For the Air Force of the new state, jet fighters were needed, and Attackers, such as the most modern jet machines available to them, became such aircraft. In 1952-53, Pakistan received 36 aircraft of the F M.I version, but without a wing folding mechanism, landing hook and with a cockpit, like the FB Mk.2. These aircraft successfully served for several years, giving way to a place after the American “Seibram”.

The Attacker failed to leave a noticeable mark in the history of the development of UK jet aircraft, failing and having had time to become the main fleet-decker. The reason for that was poor handling on landing and takeoff and the unfortunate choice of chassis scheme. In addition, the speed characteristics of the aircraft very quickly ceased to meet the requirements of the military, since the development of jet aircraft in the fifties was almost "leaps and bounds."

The only surviving copy is exhibited at the Museum of British Naval Aviation. 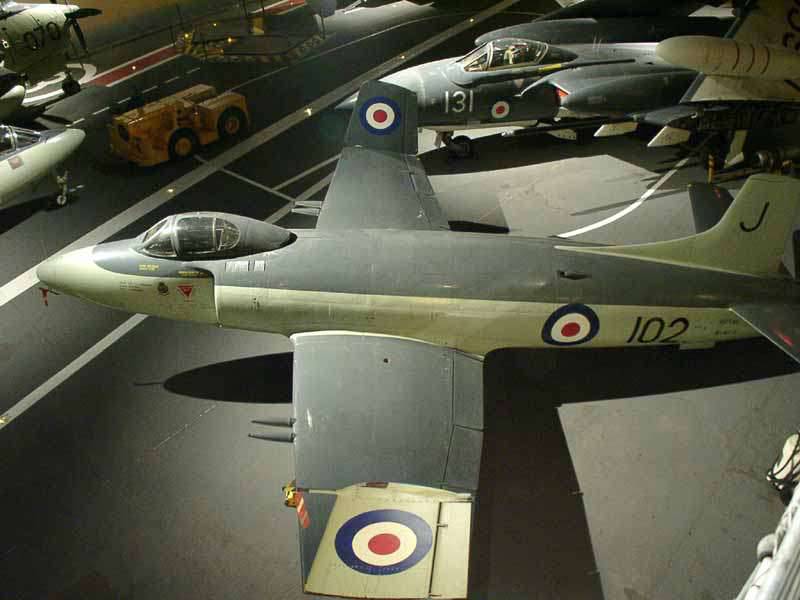 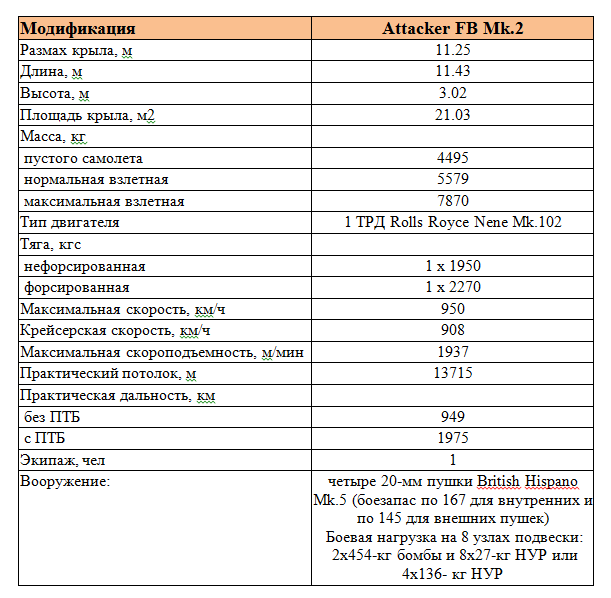 Ctrl Enter
Noticed oshЫbku Highlight text and press. Ctrl + Enter
We are
"Battle", not live up to expectationsAn-12 in Afghanistan
8 comments
Information
Dear reader, to leave comments on the publication, you must to register.