February 12 2016
8
Until the end of the tenth years of the last century, Swiss gunsmiths showed little interest in machine pistols. Only in 1919 were several samples submitted. weapons this type, which, however, are not widespread. Probably the reason for this was the use of interesting and unusual, but dubious ideas. Unlike other submachine guns of the time, the first Swiss samples of this class were equipped with automatic recoil based on the barrel with a lever lock bolt.


The creator of the first Swiss machine guns was Colonel Adolf Furrer, who ran the W + F factory (Waffenfabrik) in Bern. This company was engaged in mass production of Parabellum pistols, and in the future could learn new types of products. Using some ideas from the project of Georg Luger, A. Furrer decided to build his own submachine gun. The result of this project was the emergence of several samples of small arms. At the same time, several pistol-machine guns were first created, and in the course of time they reached the point of creating automatic weapons for a rifle cartridge.

The prototype of the machine gun M1919, left view, from the gate. Photo Forgottenweapons, com

The basis of the new project was the ideas borrowed from the design of the pistol "Parabellum". At the same time, however, A. Furrer did not simply take the finished structure, but introduced some noticeable changes in it, aimed at improving the work of the mechanisms. In addition, the composition of the new weapons planned to include a number of original parts. The project of a promising submachine gun was developed in 1919 year, with the result that received the appropriate designation. In most sources, it is referred to as W + F M1919 or Furrer M1919.

To improve the ergonomics of weapons, the designer suggested turning the base mechanism to 90 °. Thus, the supply of ammunition was not carried out from the bottom, but from the side, thus, the mechanisms of the bolt and the window for ejection of the sleeves should be located on the other side of the weapon. It was assumed that such an architecture of a submachine gun would allow maintaining acceptable dimensions with adequate characteristics.

The prototype is on the right. Photo Forgottenweapons, com

The main weapons mechanisms were located in a complex-shaped receiver. Attachments for a mobile trunk were provided in its front part, in the right wall there was a receiving window of the magazine, on the bottom surface there were details of a firing mechanism. The left part of the receiver was made in the form of a unit with several protrusions of complex shape, with which the shutter levers should interact.

The submachine gun M1919 was equipped with a rifled barrel caliber 7,65 mm long 270 mm. On the outer surface of the trunk provided for the valleys. The muzzle of the barrel was placed inside the muzzle accelerator of a cylindrical shape, and the breech entered the corresponding hole on the front wall of the receiver. During firing, the barrel had to make reciprocating movements, ensuring the operation of automation. 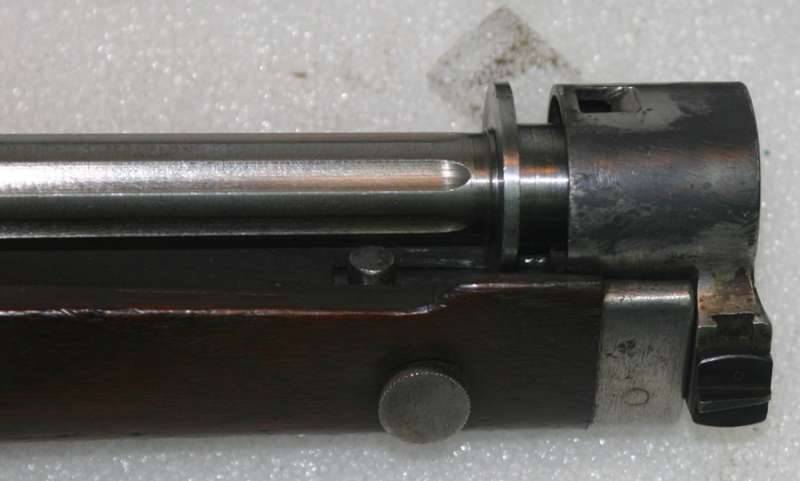 The design of automation, unusual for such weapons, led to the creation of corresponding additional fittings. Submachine gun Furrera had to be equipped with a wooden box with a lining for the barrel. Unlike other weapons, the cut-out for mounting mechanisms was located not in the upper part of the box, but in the side. Thus, in the left part of the box, a deepening of a complex shape was provided in which the receiver, barrel and other mechanisms were mounted. For safety, the arrow barrel additionally closed lining. In the right surface of the box there was an oblong hole in which the wall of the receiver with the receiving window of the store was located.

It was proposed to hold the weapon while firing by the neck of the butt with a pistol shot and the forearm, formed by the front part of the box and the lining. Some samples of submachine guns W + F M1919 also equipped with a wooden front handle. This detail was set at the level of the breech breech and was supposed to provide a more comfortable retention of weapons. Inside such a handle was installed telescopic stop-bipod. The design of the latter made it possible to change the height of the handle with an emphasis from 260 to 380 mm. It can be assumed that due to the specific layout and asymmetrical arrangement of the parts, the weapon was markedly different from other models in its behavior when shooting.

Shutter mechanisms. The shutter itself is in the rear position, the levers are folded. Photo Forgottenweapons, com

The M1919 product automation was based on the ideas of the Parabellum project, but it had some differences. The impetus for the operation of the mechanisms received from the rolling barrel, rolling away with recoil. To lock the barrel before the shot was used bolt with a drummer and a system of levers. At the same time, unlike the gun of G. Luger, A. Furrer’s weapon had not two, but three levers. When the bolt was in the extreme forward position, two longer levers, connected to the bolt and with each other, were located parallel to the barrel. The third short lever attached to the second and to the receiver was perpendicular to them. When the barrel and bolt rolled back, the short lever had to turn on the axis, thereby increasing the space available for moving the other two levers and the bolt. Such a revision made it possible to preserve a successful automation system, as well as equip it with a gate of the required mass.

For cocking weapons used a small handle connected to the bolt. She was pulled into a long slot on the bottom of the weapon, which made it necessary to turn the submachine gun to work with her. 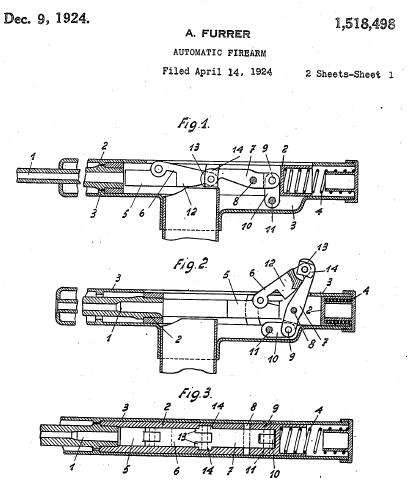 Scheme of operation of the lever mechanism, drawing from the patent. Photo Guns.allzip.org

The weapon received a fuse-translator of fire, which ensured the safe handling of weapons or the firing of both single and burst. The control of this part of the firing mechanism was carried out using the rotary flag, located on the upper surface of the weapon, in front of the whole. Among other things, it allowed to constantly monitor the operation mode of the trigger.

As a weapon it was proposed to use the pistol cartridge 7,65x21 mm Parabellum. The supply of ammunition was carried out from a detachable box-shaped store of a curved shape that contained 40 cartridges. The store was placed in the receiving window on the right side of the receiver and was fixed with a latch. The ejection of the sleeves was made through a window formed by the walls of the box and the movable gate. 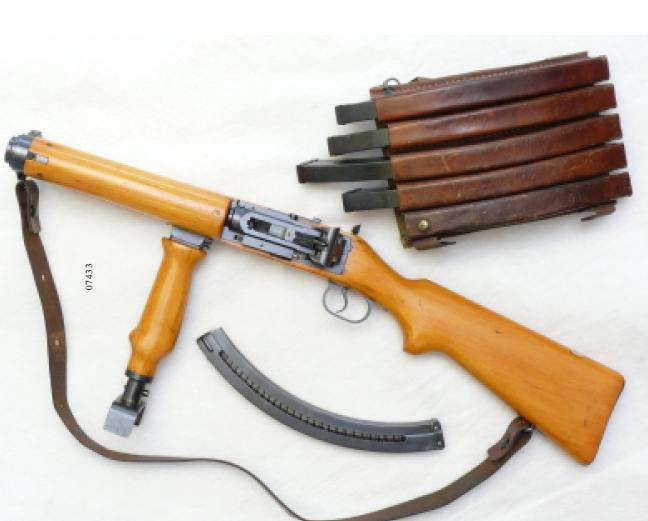 For aiming a submachine gun received the most simple sights. A small unregulated front sight was attached to the muzzle of the barrel, and a rear-sight pillar was positioned above the rear part of the receiver. The possibility of aimed shooting at a distance of up to 500 m was declared.

Despite the mass of original ideas, the submachine gun of A. Furrera did not differ much from its foreign analogues in terms of weight and dimensions. The total length of the weapon did not exceed 790 mm, and the mass without cartridges remained at the level of 4,8 kg. Thus, the handling of advanced weapons in general was not associated with any ergonomic difficulties, although in some cases the side magazine and the lower front handle could interfere with the shooter.

Used automation allowed firing single or bursts. In the latter case, the technical rate of fire reached 1200 shots per minute. The initial speed of 7,65-mm bullets reached 350 m / s. The effective range of fire, due to the use of a relatively low-power pistol cartridge, did not exceed 100-150 m.

In 1919, a promising submachine gun was offered to a potential customer in the person of the Swiss army. According to some reports, the weapon came to the test, during which the commanders were going to choose a new submachine gun for the army. The weapons of the factory W + F coped with the tests and showed fairly high performance, but did not receive the approval of the military. The submachine gun M1919 was rather complicated and expensive to manufacture. From this point of view, he was seriously inferior to the German-developed MP-18 submachine gun.

Serial M1919, view from the side of the shutter. Photo Eragun.ru

According to the results of tests for armament, German weapons were adopted. Soon a contract appeared for the supply of finished submachine guns, and later the Swiss industry mastered the assembly of weapons under license. Product W + F M1919, in turn, remained out of work. According to some reports, in the 1919-21 years, A. Furrera’s factory produced 90 submachine guns of its design, but they were not acquired by the army. The further fate of most of these weapons is unknown, but it seems that they were disposed of or used as a source of spare parts for newer weapons.

Despite this, several samples of the first Swiss submachine gun survived to this day. So, in the British National Firearms Center Museum the first M1919 prototype is stored. From the later serial products, the weapon with the serial number “1” differs in the finishing of wooden parts, the absence of the fire interpreter flag on the upper surface, etc. Probably, all these details were introduced into the design of the weapon after verification of the first prototype. Also several serial submachine guns are kept in European museums and private collections.

Due to the lack of interest from potential customers, the Furrer M1919 project was abandoned. Before 1921, several dozen units of such weapons were manufactured, which, however, were not used in practice. However, the failure of the project did not lead to a complete stop of work. By the mid-twenties, Adolf Furrer and his colleagues presented a new weapon based on their ideas and solutions, which had already been tested in a previous project.