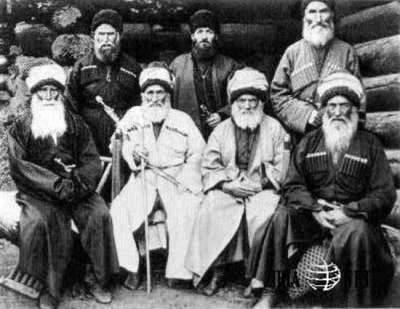 In everyday consciousness, Caucasian Islam is perceived as a kind of monolithic and cohesive structure. But in reality this is far from the case. The peoples of the Caucasus perceived this belief in various ways and at different times. If in Dagestan and parts of Chechnya it appeared as early as the 6 century, with the Arab conquests, in other regions the process of its distribution was uneven and, often, painful. The population of the central and western Caucasus in one degree or another was Christian, and the Crimean khans, encouraged by Turkey, conducted Islamization there with fire and sword. But right up to the middle of the 19 century, among the descendants of Alans and Circassians, worship of the cross was celebrated, Easter and Christmas were celebrated, Issa (Jesus) and Maryam (Mary) were especially revered. And only the Murids movement finally pushed this paradigm to the margins of social consciousness. But even now, legends, traditions and sayings about Christian antiquity have been preserved in the people's memory. This is manifested in the mentality of people in their choice of life strategies. Remains of paganism have survived to our times. Thus, the vivid mythology of the Iranian-speaking tribes exists along with the Auramistic ideas in the spiritual life of the Ossetians. Some of the customs among the Adyg peoples are preserved from the Bronze Age, and the world perception of Balkarians and Karachais is permeated with steppe polytheism. In the minds of the highlanders, the adats in some incomprehensible way coexist with the laws of Sharia.


The Caucasian knot is a place of concentration of various peoples and languages. Genetic studies have shown that representatives of the Khat, Hurrian, Indo-European, African and other haplogroups participated in their ethnogenesis. Many empires sought to seize these territories, and, consequently, had an impact on the local population. The result was a significant diversity in religions and beliefs. Most Muslims consider themselves Sunnis. Moreover, this current is far from uniform: Kabardians, Balkarians, Circassians, Karachays, Adyghes, Abazins, some of the Ingush belong to the Hanafi mazhab, and the Chechens, the Dagestan peoples - to the Shafit. It is clear that belonging to this or that school does not cause any special problems in relations between the Sunnis, but, for example, the enforcement of Sharia norms in each of them has its own characteristics. In addition, a significant proportion of Lezgins are Shiites.

Traditional Islam in the Caucasus for more than a century has developed in deep isolation. Initially, his contacts with the outside world were limited by the tsarist government, and later by the Soviet one. The priests were persecuted, the mosques were destroyed. Faith was preserved only thanks to individual devotees who mechanically read the Koran in Arabic. The lack of information from outside was compensated by folk art, new traditions and customs arose, something was adopted from even the neighbors of Christians. So one of the initiatives of the authorities of Karachay-Cherkessia to jointly celebrate the Parents' Day in mixed villages contributed to the fact that the highlanders began to more carefully care for the graves of their ancestors. And there are many examples of mutual influence. In general, this state of affairs protected Muslim communities from the main lines of development of Islam, making them defenseless against foreign influence.

The destruction of the Soviet Union led to the emergence of Salafi sects in the former republics. Wahhabis, and later, supporters of ISIS, began to exert severe pressure on local Muslims, to seize their mosques, to recruit supporters into their ranks. It should be noted that fundamentalists (those who propose to return to the origins of Islam) have always been unwelcome guests in the Caucasus. Initially, they were held back by the Ottoman Empire, later by the Russian and the USSR. And only in the period of anarchy, both in the 19 century and at the end of 20, did they leave their trail of blood in the mountains. With the weakening of state power one of the few forces opposing the Salafi expansion, Sufism remained. This deeply mystical teaching enjoyed support in Turkey during the Ottomans. But in the Atatürk national state he had no place. Muslim fundamentalists have always been extremely hostile to the Sufi movement, they considered him a heresy.

In Soviet times, Sufism, Muridism, or Tarikatism were kept underground. His communities are preserved in Dagestan and Chechnya. Unlike Wahhabism, this doctrine does not require its followers to wage war against infidels, no matter who they are or where they are. Jihad here is declared in case of aggression against supporters or the country. In the Caucasus, three of its currents were widespread: An-Nashbandiya, Al-Qadiriya, Al-Shaziliya. But the tradition was interrupted. It is believed that now there are no Shaikhs who have the right to transmit ijazu. The teachings continue to live only in the popular environment, under the tutelage of religious leaders. In Dagestan, there is an unofficial alliance between the political establishment and the elite of the Sufis. In Chechnya, the Kadirite vidry resisted the dictatorship of Dudayev. In the initial stages of the ATO, they also fought with federal troops, but later joined with them to fight the fundamentalists.

Thus, we see that Caucasian Islam is many-sided and multifaceted. And if you do not take into account the radical directions, it becomes clear that the spiritual values ​​accumulated by this religion allow peacefully to exist here for the most diverse peoples and peoples. In Russia, the followers of this denomination demonstrate the most successful models of living arrangement. This is not typical for many Western countries. The richest legacy of Muslim theosophy is the basis for fundamentally new phenomena in state-building, art and business.

Ctrl Enter
Noticed oshЫbku Highlight text and press. Ctrl + Enter
We are
Results of the week. "Whoever comes to us with a sword, he will perish by the sword"Artillery of the Korean People’s Army. Part of 3. Reactive systems
55 comments
Information
Dear reader, to leave comments on the publication, you must to register.