"Liberal Democrats" or just enemies of the people? Crimea as a lie detector

February 5 2016
80
Liberalism and democracy in theory imply respect for the freedoms of citizens, obedience to the will of the majority and unconditional priority of the will of the people ... 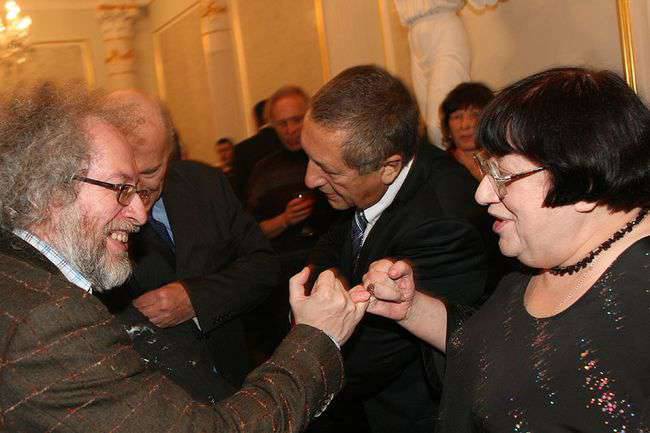 But this is only in theory. In practice, we see that under the guise of "liberals" and "democrats" in the territory of many countries (both the former USSR and the near abroad) are hidden banal grant-eaters and agents of influence of the West, for whom the concepts "people's will", "referendum", "Plebiscite" and "alternative opinion" is nothing more than an empty sound.

It is ridiculous that I, a supporter of the statism and dictatorship of the Progressors, turn out to be a greater democrat than these impostors.

You say I'm unfounded? Not at all, I have reinforced concrete evidence and examples of frank contempt from the so-called "liberals" and "democrats" for the opinion of the people.

The most vivid example is the attitude of the “liberal democrats” to the Crimea.

Almost two million people live in Crimea. The overwhelming majority of them spoke in a referendum in favor of returning to the Russian Federation. And, looking at the arbitrariness, terror and the Nazi sabbath, occurring in Ukraine, only strengthened in their choice.

And what, at least one of the so-called "liberals" said, "I respect the opinion of these people"? Even if for a moment it is assumed that the referendum was somehow “not that kind” (which no one has yet presented any clear justification for), then it would be logical to conduct another, “more honest” one. Someone proposed to hold an alternative or verification referendum, with the participation of international observers? Not!

All these characters, starting with Mikhail “2%” of Kasyanov and ending with Leonid “Who is this at all?” Gozman unanimously declare “Crimea should be given to Ukraine”. 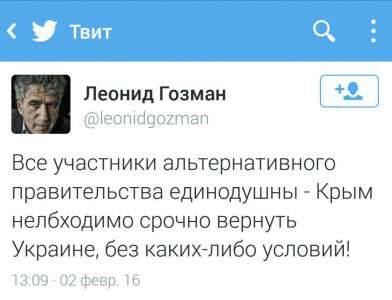 And they asked the Crimeans? Do the inhabitants of Crimea want to be “given away” as serfs in the eighteenth century? For all these "democrats" Crimeans are silent cattle, whose opinion no one is going to ask.

Crimea must be “returned” because Messrs. Kasyanov and Gozman receive grants from the US State Department, and grants need to be worked out. In this case, the fate of a couple of millions of people they do not care.

They say that Democrats should listen to the opinions of their voters, and voice their wishes. But, unequivocally, not in the case of the Russian “liberals”, who have long ago made this (initially beautiful) word abusive in Russia.

Liberals, the cumulative rating of support for all of them taken together, does not exceed 2-3%, try to dictate their will to the rest of 98%. This is called the "dictatorship of the liberals." Fortunately, they will never come to power in Russia legally, that is why they dream of their belolentochny maidan.

Western liberals in Russia are political corpses and losers who have no electoral prospects and are well aware of this. That is why their numerous statements about the "other people" who need to "replace the existing Russian."

And in general, such statements about the "wrong people", about the "wrong 85% of the population" that needs to be destroyed - even the classic Nazis didn’t think of it. Those, at least, talked about the destruction of citizens of other states (which, of course, does not justify them), and not his own.

The most "humane" of them speak of the mass deprivation of the right to vote of the "wrong" inhabitants of the country, who do not agree to unconditional surrender to the West and external control. Democrats are democrats.

Separately, I “liked” how they justified the massacre in Odessa by allegedly “patriots defending the stability of their country from those who were shaking it”. In fact, the stability was defended by the “Berkut” just from maydanovtsy, who carried out an armed coup and transferred Ukraine under external control.

Well, and in the comments they are interested: is it possible to do the same with the liberals, who are undermining the stability of Russia? Because there are a lot of volunteers, and they are interested in whether it will be sufficiently democratic? In order to get rid of the liberals, they are even ready to shout “Glory to Ukraine / Gabon / Rabinovich” once, if this is an obligatory attribute of “democracy”.

As we see, neither the voice of the people, nor the pluralism of opinions, nor the will of the majority of Russian (by the way, Ukrainian as well) liberal democrats are interested. They are ready to deprive of rights and destroy dissidents, imposing a cruel dictatorship, but they attribute it to those who do not and are not going to. As Grandfather Freud said, the projections of their own desires and complexes on others.

As well as the overwhelming hatred of others is only a projection of the thirst for self-destruction associated with a bad conscience. It is a pity that punitive psychiatry has not yet been revived - people frankly suffer and suffer.

Ctrl Enter
Noticed oshЫbku Highlight text and press. Ctrl + Enter
We are
About Stalin and KhrushchevWhat you didn't want to know about England
80 comments
Information
Dear reader, to leave comments on the publication, you must to register.