The first tank: why the army of Russia mechanized fist 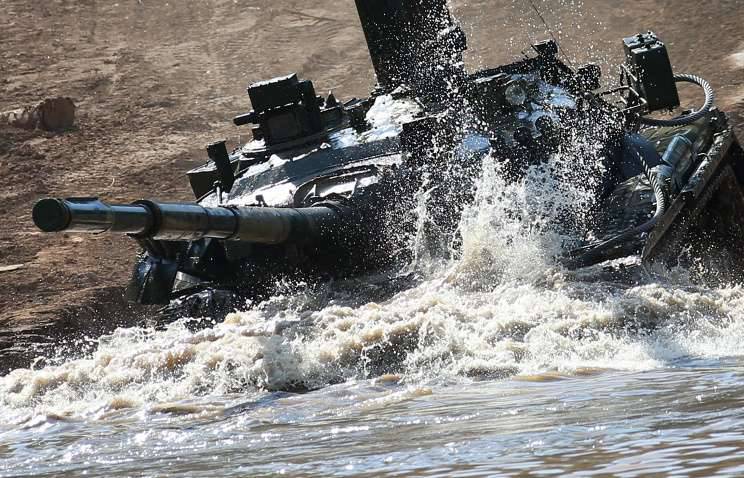 MOSCOW, February 2. / TASS /. First Guards tank The army was re-formed in the Western Military District (ZVO). This was announced on February 1 by the Russian Ministry of Defense.

Its structure included the Kantemirovskaya tank and Taman motorized rifle divisions, as well as a number of other formations and units. The headquarters of the new army will be deployed in the Moscow region.

According to the military department, the main armored tanks T-72B3, T-80, infantry fighting vehicles BMP-2, as well as over 130 types of other types of military equipment and modifications are in service.

On January 29, Major-General Alexander Chaiko was presented with the standard commander of the 1-th Guards Tank Army at the board of the Russian Defense Ministry.

It was also reported that this year military personnel of this army, under the command of Chaiko, will have to spend over 1,5 thousands of combat firing units, platoons, company and battalion tactical exercises, as well as planned combat training activities.

Russian military leaders specifically commented on this decision for TASS:

Maslov: "return to the regiments, divisions and armies"

The Commander-in-Chief of the Ground Forces of the Armed Forces of the Russian Federation in 2004-2007, Army General Alexei Maslov said that the creation of the first tank "is definitely the right decision."

He stressed that "previously these two divisions - Taman and Kantemirovskaya (they became part of the 1 tank army - TASS approx.) - were not very convenient to manage. The headquarters of the Western Military District is located in St. Petersburg, and both units are in Moscow Region. Therefore some kind of governing body should be created. "

"It is very good that such was the operational unification - the tank army," said Maslov.

Its formation will make it possible to improve the training of formations for carrying out missions for their intended purpose, improve the quality of combat training, and strengthen control over the daily activities of units and formations. And finally, this is a kind of return to our historical roots - regiments, divisions, armies. We should not chase new-fangled terms. We have something to be proud of without it. One story of the 1st Guards Tank Army is worth a lot in this regard

Shevtsov: "elimination of flaws and errors"

The commander of the 1 Guards Tank Army (1991-1993), the Chief of the Main Operations Directorate of the General Staff of the RF Armed Forces (1995), Colonel-General Leonty Shevtsov noted that “the revival of the tank army is the elimination of flaws and mistakes laid down by the former the leadership of the Ministry of Defense and the General Staff. "

Previously, the disbanding of formations and unions was accomplished to the accompaniment of statements that Russia currently has no enemies and that it now does not need to contain corps and army type formations in the Armed Forces.

Shevtsov recalled that when he was the representative of the Russian Federation at the Allied Command Headquarters in Brussels in 1995-1997, "this military unit included 16 states, today is already 28, and our western border is bare."

Therefore, he assured that, "without any doubt, the re-creation of the 1 Guards Tank Army is absolutely the right decision."

The newly formed 1-I Guards in their combat and numerical strength, according to Shevtsov, no more than a body. “At present, there are only two divisions and one brigade in the army. In former times, there were at least four to five divisions in such operational units, and sometimes their number reached ten,” he emphasized.

According to the colonel-general, at least two more full-blooded units should be included in this army.

"The Taman and Kantemirov divisions were never fully equipped units. As a rule, these divisions were contained in a two-regimental squad. Their number did not reach 12-12,5 thousand, which corresponds to a fully-equipped division. And if the compound is equipped with 70%, this means in practice, it is limited in combat readiness. For military parades, the capabilities of the Taman and Kantemirov divisions are quite enough, but for fighting, probably, not, ”Shevtsov stressed.

Also, according to the general, “the decision on the formation of the army is one thing, and quite another when the newly created association becomes a truly manageable and combat-ready military body.” "Even the deployment and bringing to combat readiness of one division took a very long time. Sometimes it was three years, sometimes even more," Shevtsov assured.

In addition, a lot of effort will require the preparation of appropriate infrastructure.

In a fully staffed division of the state about 1200 officers. For them, we need housing that meets modern standards. And still required are barracks for personnel, training centers, training grounds, capital facilities for storing weapons and military equipment, and established stocks of material resources. And now raise this bar to the army level, and it will become clear how much more effort and hard work ahead. That is, you can assemble personnel, equipment, too, but it will not be the army yet. In other words, work, work and work again

Sitnov: "We do not need to copy the American experience"

The chief of armament of the Russian Ministry of Defense in 1994-2000, Colonel-General Anatoly Sitnov said that the re-establishment of a tank army "can only be regarded as a step in an exceptionally correct direction."

Initially, divisions were recreated in the Russian Armed Forces, now it is the turn of the operational units — armies. According to Sitnov, it is the division that is the key element in the Armed Forces of Russia and “the decision taken at the time to switch to the brigade basis should be regarded as wrong for our conditions”.

Only a division, a kind of self-sufficient and effective compound with its own control system, is able to successfully solve its tasks. What is being created today (the formation of the 1 Tank Army - TASS approx.) Is a revival of structures capable of solving operational and operational-strategic tasks in certain areas. And this is good news. We do not need to copy the American experience. We have our own experience, and the richest, enough

After the re-establishment of armies, according to Sitnov, it is also necessary to revive front-line and strategic sets of units and formations. "All these organizational and staff measures should ultimately lead to a dramatic increase in the technical readiness of weapons, the revival of the weapons recovery system," he stressed.

Also, according to the general, it is necessary to revise the powers of the commanders-in-chief of the branches of the Armed Forces. "Their role in many issues and in many areas should be significantly enhanced. This is especially true of the revival of the training system, issues of combat and operational training."

Ctrl Enter
Noticed oshЫbku Highlight text and press. Ctrl + Enter
We are
Military reform as an integral part of the security concept of the Russian Federation: Systematic dynamic assessmentOpinion
173 comments
Information
Dear reader, to leave comments on the publication, you must to register.