The project of the aviation machine gun Flieger-Doppelpistole 1919 (Switzerland)

February 19 2016
4
As you know, the famous Italian submachine gun Villar-Perosa was originally created as a light-weight weapons for aircraft. However, the characteristics of this weapons deemed insufficient for use in aviationAs a result, a modification appeared for the infantry. It was in this role that Villar-Perosa was used until the end of the First World War. In 1917, the Austro-Hungarian forces began limited operation of their submachine gun Frommer Stop M.17, designed to become a direct analogue of Italian weapons, but this project failed. Foreign experience clearly spoke of the dubious prospects of the very idea of ​​a double-barreled weapon under a pistol cartridge. However, this did not stop the Swiss gunsmith who developed a similar specimen called the Flieger-Doppelpistole 1919.


The author of the unusual project was the Swiss gunsmith Adolf Furrer (also found transliteration Furrer), at that time supervising the W + F weapons factory (Waffenfabrik) in Bern. The main products of the company were Parabellum pistols, but the factory’s specialists were also involved in their own projects. So, from the end of the tenth to the beginning of the forties of the last century, W + F specialists developed several submachine guns with different characteristics. An interesting feature of all the projects was the active use of the main ideas borrowed from the Parabellum pistol. In 1919, A. Furrer and his colleagues created an "ordinary" infantry submachine gun, as well as original weapons for aviation. According to some reports, both of these samples had a high degree of unification, because of which the aircraft submachine gun could be considered a modification of the infantry.

As conceived by the designers, light military aircraft should be equipped with compact and quick-fire small arms using a pistol cartridge. To increase the rate of fire, it was decided to equip the weapon with two barrels. Whether A. Furrer knew about the failure of the Italian colleagues is unknown, but decided to repeat their path. The project of the new aviation machine gun received the designation Flieger-Doppelpistole 1919 (“Aviation double gun 1919 of the year”). Also, these weapons are often referred to as Furrer M1919, however, in this case, confusion is not excluded, since this name is also used for infantry weapons. 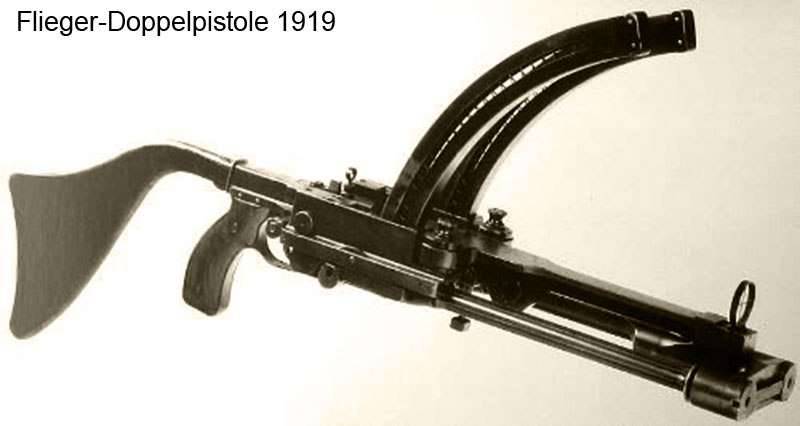 Probably, the Swiss gunsmith really liked the automatics of the Georg Luger design, which is why all his designs produced mechanisms similar to the Parapellum pistol. The “double gun” was no exception. At the same time in the new project it was decided to use two main automation units, one per barrel, and also to connect them using a synchronization mechanism. Thus, Flieger-Doppelpistole 1919 was built on the so-called. Gast scheme.

The main units of the aviation submachine gun became two automation units, housed in their own receiver boxes. In this case, the boxes of two blocks were connected to each other using a hollow jumper. From the last forward departed support device, at the end of which were located the retaining device for moving barrels and some sighting devices. Behind the trunk lintels placed a rectangular casing of the trigger with a pistol grip and trigger. In the same place the butt of a bent form fastened.

On the central beam, which passed between the trunks, a loop was provided for mounting on turrets of a suitable design. In this case, the weapon could swing in a vertical plane, and the corresponding turret parts should be responsible for the horizontal guidance.

Inside the two receiver boxes located automation mechanisms, similar to those used on the pistol "Parabellum". In this case, the supply of cartridges was made from the top, and the liner had to be thrown down, which affected the orientation of the parts. It can be said that every Flieger-Doppelpistole 1919 firing unit was an inverted G. Luger pistol. The weapon as a whole, in turn, looked like two inverted pistols with a synchronization mechanism between them. 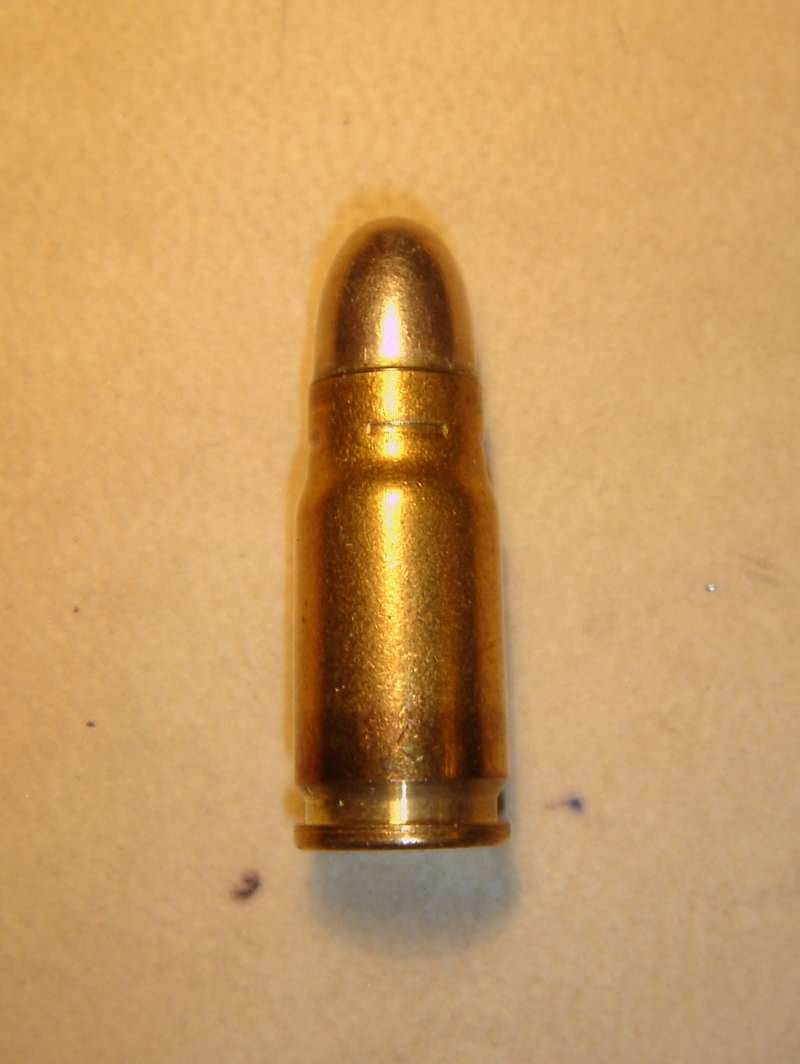 Automatic weapons based on the short course of the barrel and used the lever lock bolt. Directly with the breech of the trunk should have been in contact with the bolt drummer. Behind the gate was attached a system of two levers connected by a hinge. At the same time, the rear arm was hinged to the receiver. Due to the system of figured grooves on the receiver, the levers had to ensure the correct movement of the bolt when firing, and also reliably press it to the breech bore during the shot. The levers were increased and weighted in comparison with the base pistol, which should have affected the rate of fire.

The submachine gun received two barrels of 300 mm length in 7,65 mm caliber. The barrels were movably secured in the front restraint (it was possible that the muzzle accelerators were located in it) and the front wall of the receiver. When fired, the recoil should have thrown the barrel back, after which the recharge cycle began. An interesting feature of A. Furrer’s weapons was the use of a synchronization mechanism. In the central bridge of the submachine gun there was a movable lever with which the barrels were connected to each other. Moving back, one barrel through the lever had to act on the second and move it forward. At the next shot, such a cycle was repeated.

The new weapon borrowed not only the automation scheme, but also the cartridge. The Flieger-Doppelpistole 1919 product was supposed to use the 7,65x21 mm Parabellum pistol cartridge. It was proposed to load such ammunition into two detachable curved box-shaped magazines. The capacity of the store was 40 cartridges. Stores were proposed to be placed in the upper receiving windows of receiver boxes. Cartridges were shot through the window on the bottom of each box. 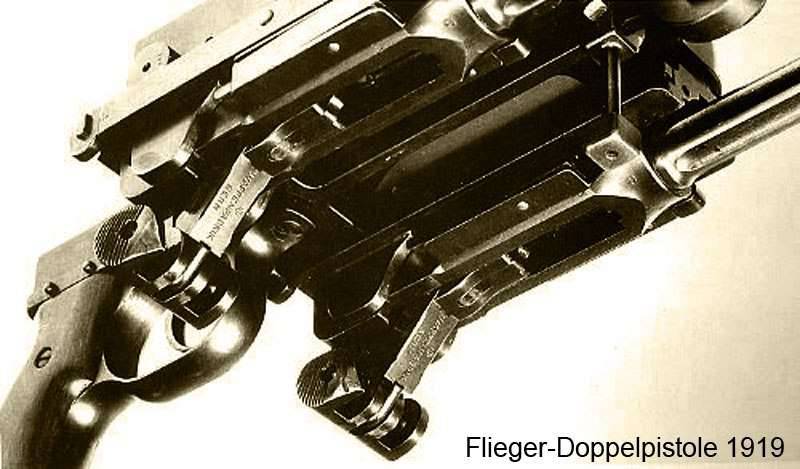 View of the weapon below. The levers of automation are folded, the valves in the rear position. Photo Vk.com/all_of_weapon

In the rear rectangular casing, above the fire control handle, a part of the parts of the firing mechanism was located. This device was equipped with a fuse with a flag on the outer surface of the case and allowed to fire in automatic mode. Due to the use of the synchronization lever of the Gusta scheme, shots were fired from two barrels alternately.

It was proposed to search for a target and direct a weapon with the help of mechanical sighting devices. Unregulated rear sight was located on the jumper between the receiver, and on the muzzle device mounted front sight in the form of angle rings. It was assumed that such sighting devices would allow the gunners to attack targets with acceptable effectiveness. Despite the apparent inconvenience of the ammunition systems, there was enough space between the shops for normal use of the sights.

The ease of use of weapons was conditioned by the use of several parts that facilitate retention and firing. Behind the trigger there was a pistol grip in the form of a metal base with wooden lining. A wooden butt of complex curved shape was also attached to the rear casing. 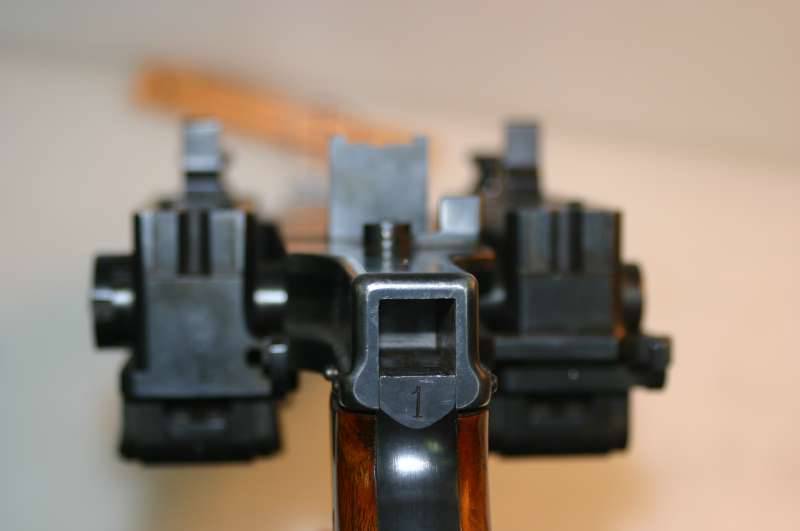 View of the weapon from behind. Photo Forgottenweapons.com

According to reports, the promising Flieger-Doppelpistole 1919 submachine gun had a total length of about 635 mm and barrels of 300 mm each. The weight of the construction without cartridges reached 8,6 kg. The weapon turned out quite heavy for its class, but the weight could be partially compensated by mounting it on a turret. Hand-shooting was not envisaged, as the submachine gun was offered exclusively as a weapon for aircraft.

The automatic equipment based on the Parabellum pistol developed by Adolf Furrer allowed to fire at a very high rate. The total rate of fire in the alternate shooting from two barrels reached 1900 shots per minute. Thus, the shooter had the opportunity to literally fill the target with bullets. However, with continuous firing of ammo ready for use in the amount of 80 cartridges, it lasted only for three seconds, after which recharging was required.

The dubious advantage in the form of the highest rate of fire was complemented by a clear drawback associated with the used cartridge. Pistol cartridge 7,62x21 mm "Parabellum" could be used in light infantry small arms, but not at all suitable for aircraft machine guns. The effective firing range using such ammunition did not exceed several tens of meters. At large distances, the energy of the bullet was reduced to unacceptable values ​​and did not allow reliably hit targets. Thus, the aviation submachine gun had insufficient characteristics for use in practice.

According to some reports, the W + F company introduced its Flieger-Doppelpistol 1919 submachine gun to the military, but they responded to it without enthusiasm. By the end of the tenth years of the last century, no one argued that the weapon for pistol cartridges was not suitable for combat aircraft. Thus, the use of waste mechanisms or a uniquely high rate of fire could not outweigh the insufficient characteristics of the used cartridge. The project was rejected, because of what he did not go out of the prototype test stage.

There are references to testing or trial operation of double-barreled submachine guns in the Swiss army. According to these data, despite the refusal of the military, several units of such weapons were made in an infantry configuration. For some time this weapon was used by individual arrows, but in the near future it was written off due to the lack of prospects.

After that, the company A. Furrer and other Swiss gunsmiths no longer raised the topic of an aviation submachine gun. Seeing in practice the futility of such an idea, they abandoned it and continued to develop other weapons suitable for practical use. For example, the staff of the company W + F later presented several other pistols of machine guns. As for the experienced 1919 Aviation Double Pistols of the Year, at least one prototype later became a museum piece. Now it is stored in the UK, in the National Firearms Center (Leeds).