February 9 2016
27
Until a certain time, China did not have developed armory industry, because of which he had to rely only on the supply of foreign weapons. Subsequently, with the help of foreign countries, it was possible to establish the production of various weapons, but even after that there was no complete rejection of imported weapons. So, some of the available samples were redone on new projects and continued to be used in the army, gradually giving way to newer weapons. One example of such an approach to the preservation of weapons was the project of remaking Japanese Arisaka rifles under a new cartridge.


In the fifties, the Chinese industry began the production of several types of small arms of Soviet development, designed to use the intermediate cartridge 7,62х39 mm. In this regard, the weapons of the People’s Liberation Army of China received copies of the Kalashnikov assault rifle, the Degtyarev light machine gun and the Simonov self-loading carbine. AK, RPD and SKS gradually became the main weapon of the army, displacing the available samples. Nevertheless, the command of the army did not decide to completely abandon obsolete weapons. Moreover, a part of this weapon had to be upgraded and continue its service.

After the end of World War II, a large number of Japanese weapons remained at the disposal of the Chinese armed forces, including the Type 38 or Arisaka rifles. Like other foreign-made weapons, Japanese rifles were actively used by Chinese soldiers over the next few years. However, over time, problems with ammunition began to appear: the occupants left a significant amount of 6,5x50 mm SR ammunition, but the reserves declined with time. The situation was similar with other weapons supplied from abroad along with ammunition.

To solve this problem, an original idea was proposed. Available samples of weapons proposed to alter under the Soviet intermediate cartridge, the production of which has already been established in China. As a result, it was possible to save existing weapons, reduce the costs of upgrading them, and also insure themselves against possible problems with ammunition in the future. The program of this modernization included several types of weapons, including the Japanese Arisaka rifles.

Japanese-made Type 38 rifles were non-self-loading weapons with a sliding bolt and magazine ammunition. No automation was provided for. Such features of rifles to some extent simplified their rework, since there was no need to reconfigure the automation for a new cartridge. In addition, it became possible to get by with just a few new parts, including ones borrowed from other weapons.

In fact, the whole modernization of the rifle was to replace a number of parts, taking into account the different dimensions of the new cartridge. Despite the smaller caliber (6,5 mm with a 6,7 mm bullet diameter), the Japanese-made rifle cartridge had a greater length - 75,7 mm against the 55,5 mm of Soviet ammunition. At the same time, the Soviet intermediate cartridge had a shorter sleeve (39 mm versus 50 mm), and the maximum diameters of the ammunition differed by about 0,6 mm. There was also a noticeable difference in the weight of the cartridges, however, as well as other parameters (powder mass, initial bullet velocity, muzzle energy, etc.), within the framework of this modernization did not matter.

Rifle "Arisaka" in the base configuration

During the development of a project to rework rifles "Type 38", it was decided not to use the existing barrels. Drilling the bore to the desired caliber was considered impractical, which is why the existing rifles had to be completed with new trunks. As a basis for the new trunk, the corresponding unit was taken from the SKS self-loading carbine, which recently began to be produced in China under a Soviet license. Such a trunk had a rifled canal and chamber, designed specifically for the Soviet intermediate cartridge. According to various sources, both the original shafts for the SCN with the length of 520 mm and their elongated versions were used.

The trunk was proposed to be fixed in the receiver and attached to a wooden box with a few screws and clamps. At the same time, the design of fasteners, in comparison with the Arisaka rifle, did not change. In view of the shorter length of the barrel, during reworking, the stock was shortened by the front part. A slot for a bayonet could also be made on a preserved part. Other elements of the wooden lodge did not change and retained the neck with the pistol protrusion, butt, etc. According to some reports, some rifles for several reasons received new wooden parts, slightly different from the original ones. This was probably due to the poor condition of the available parts and the need to preserve overall operational rifles in the ranks.

The rifle "Type 38" had a longitudinal sliding bolt with a side grip. When upgrading, it was decided to keep this node, and also not to change the principle of its operation. It was necessary to modify the extractor in connection with a different design of the liner. The comparatively simple firing mechanism was also preserved. The operation of these rifle assemblies was almost independent of the type of cartridge, which allowed them to remain without significant changes. 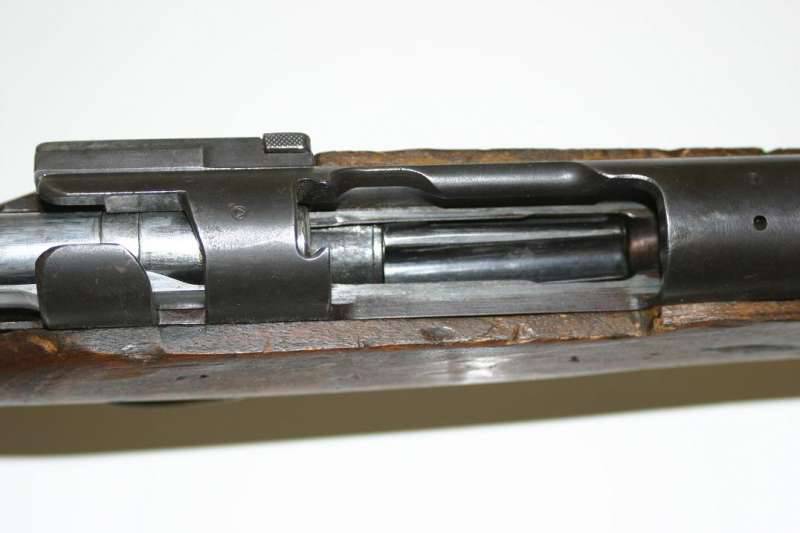 Gate and feeder of the modified rifle magazine

Significant improvements undergone shop base weapons. In the initial configuration, the Arisaka rifle had an integral box magazine on 5 cartridges 6,5x50 mm SR. It is known that rifle shops were updated in several ways, because of which the design of different types of ammunition systems could differ significantly. The main task of redesigning the store was to ensure the work of the parts when using a less long cartridge 7,62x39 mm. For this, several basic ideas were used.

Depending on the series, the store could receive a new spring, a modified feeder and / or a back stop. With the help of these parts, the “short” cartridges were pressed against the front wall of the store and remained in that position until the moment they were fed to the disilline. Samples of modified rifles with incomplete composition of new parts of the store are also mentioned. So, some rifles received a back support and a modified feeder, others were only completed with a shortened feeder, and the section of the working volume of the store remained unchanged. As before, the store consisted of only five rounds.

Despite the use of the new cartridge, the principle of the weapon remained the same. To prepare for the shot, it was necessary to turn the shutter handle to 90 ° counterclockwise and move it back. When moving back, the bolt seized the upper cartridge from the magazine and sent it to the chamber. Further, by turning the bolt clockwise, the barrel was locked before firing. To extract the spent cartridge case and send a new cartridge, you had to repeat this operation. Having shot the store, charging, according to some sources, had to be done manually and without using clips. 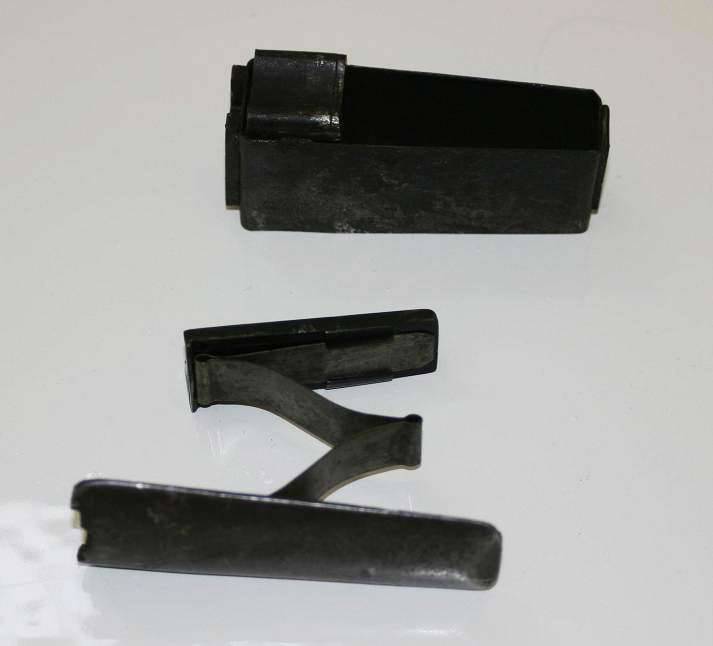 Details of the store with a shortened feeder

Improvements of the mechanisms of the rifle, first of all the store and the extractor, have been very successful. With a significant change in the dimensions of the cartridges, the performance of the systems remained at the same level. The incorrect operation of the mechanisms was extremely rare, which allowed them to confidently fire for a long time.

The updated rifles were supposed to use the new cartridge, which in its ballistics was different from the base 6,5x50 mm SR. Despite this, the authors of the modernization project decided not to equip rifles with new sights. On the trunk, the front sight was kept on a small stand, and over the breech of the trunk there was an open mechanical sight, designed for the “old” cartridge. Because of this, the new adjustment could not give the expected results, and when aiming, it was necessary to take corrections not only to the wind, etc., but also to the type of cartridge. Without such corrections, the aiming point and the point of impact significantly diverged.

Apparently, the modernization of Japanese-made rifles was carried out on several similar projects at the same time, because of which different samples of such weapons may have noticeable differences, both internal and external. For example, it is known about the existence of a significant number of “Arisaka” rifles with new bayonets. Having received the Soviet documentation on weapons, the Chinese industry also began to let out bayonets for it. Thus, SKS license carbines were completed with knife-shaped and needle-bayonets, the latter being produced in large quantities.

Part of such integral bayonets with a three-sided needle blade was mounted on upgraded rifles "Type 38". Thanks to the original hinged fastener with a latch, it was possible to literally in a couple of seconds to transfer the bayonet into a combat (forward) or traveling (laid under the barrel) position. It should be noted that similar modifications of the AK machine gun, produced in China, were also completed with similar needle-bayonets.

Before the start of a full-scale small arms modernization program, rifles, carbines, machine guns, etc. were used in the PLA. several different models for different cartridges. By the mid-fifties, this problem was partially solved: several new models were adopted for use under a single intermediate cartridge. One of the ways to modernize weapons has been the modification of Arisaka rifles, which were available in large quantities in warehouses. As production and supply of new rifles and rifles were in place, the rifles retained their place in the army, but were gradually decommissioned, sent to storage or disposal. Over time, the old rifles were completely replaced by new machine guns. To date, Japanese-made Type 38 rifles, converted by the Chinese industry under the Soviet cartridge, are considered a real rarity.

Ctrl Enter
Noticed a mistake Highlight text and press. Ctrl + Enter
We are
"Arisaka" - a rifle aimed at the futureThe weapon of victory. "Degtyaryov Infantry" - machine gun DP 85 years
27 comments
Information
Dear reader, to leave comments on the publication, you must to register.