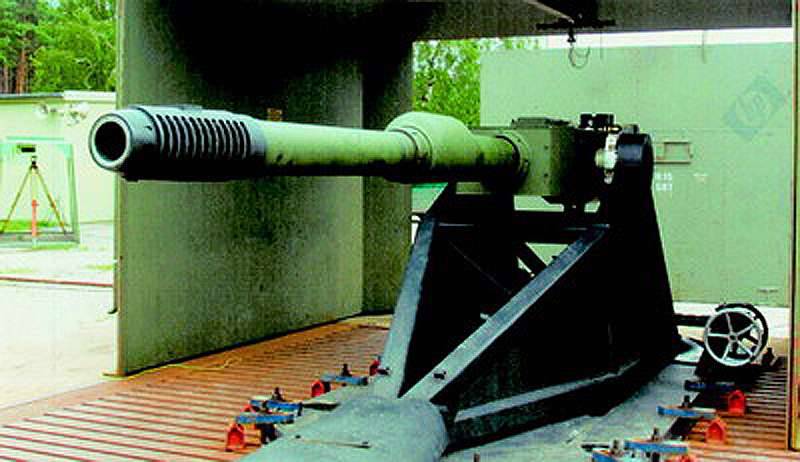 
Rheinmetall Defense smoothbore guns L / 44 and L / 55 and a wide range of ammunition besides Russian and Chinese platforms became the de facto preferred 120-mm weapon for most operators tanks.

However, since Russia continues to present more and more effective weapons and shells to the public, a moment will soon come when even the L / 55 cannon and its ammunition will need to be replaced.

In order to correct this situation, Rheinmetall began research in this direction. It is assumed that the new gun will have a caliber of 130 mm, and the projectile will be fed by an automatic loader; This will increase the rate of fire and will reduce the crew of the main battle tank (MBT) to the commander, gunner and driver.

Some sources suggest that this new weapon can be installed in a completely new machine, which may replace the German tank Leopard 2 and the French tank Leclerc, developed by the recently united companies Krauss-Maffei Wegmann and Nexter Systems.

Meanwhile, Rheinmetall Weapon and Munition is working on new projects to further develop the current set of 120-mm ammunition for existing L / 44 and L / 55 cannons, mainly at their own expense.

Werner Kramer, President of Rheinmetall Waffe Munition, said: “While we receive some government funding for research and development, we have always made significant investments with our own funds and therefore we can meet the future requirements of local and foreign customers.”

For example, the low effectiveness of the original DM12 HEAT-MP-T multi-Purpose (TR-Multi-Explosive Anti-Tank) universal anti-tank projectiles against targets prevailing in counterinsurgency operations led to the development of DM2011 ammunition in 11.

Ammunition DM11 has an insensitive high-explosive fragmentation warhead containing a mixture of steel fragments and fragments of a heavier metal (no information). It can be programmed in modes - air blast, shock or delayed - which allows you to fight enemy groups with anti-tank weapons and dismounted infantry at extended ranges, and also allows you to pierce concrete walls with double reinforcement. 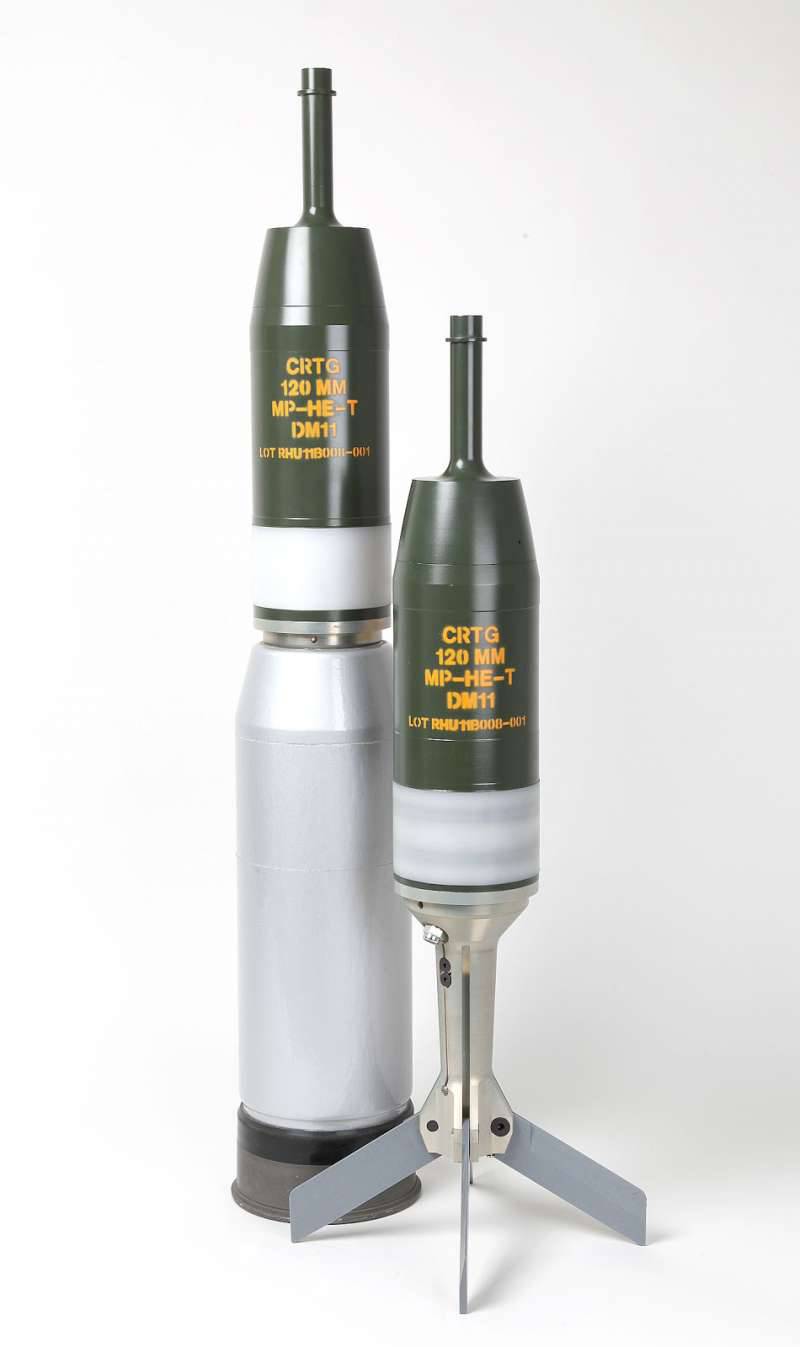 According to the company, programming the projectile in the charging chamber is a unique feature. For standard guns, the mode is usually set manually, but the breech can also be modified to enable automatic programming using the fire control system created by Rheinmetall Defense Electronics.

The DM11 feathered projectile has a maximum range of up to 5000 meters and is currently being mass-produced. The US Marine Corps was the launch customer, ordering ammunition for its MBN M1A1 Abrams, and then began to receive orders from the operators of the MBT Leopard 2. 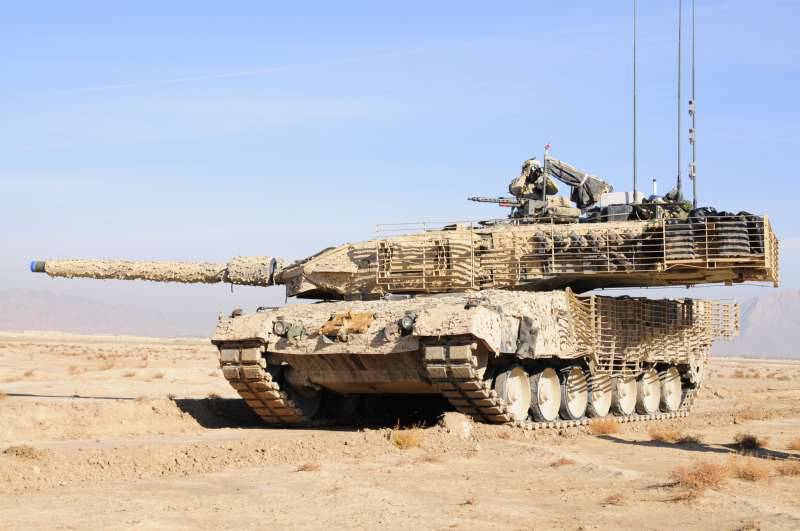 The newest version of the Leopard 2A7 + is armed with a smooth bore L / 55 cannon, which can shoot a variety of ammunition. Russia declares that the armor of the new Armata tank can protect against the majority of modern projectiles and therefore the company Rheinmetall is looking for further ways to improve armor penetration.

The US Army, meanwhile, is holding its own competition for the 120-mm Advanced Advanced Multipurpose Universal Projectile (AMP) XM1147, seeking to replace the four existing 120-mm projectiles with a single system. This projectile will fire a M256 smooth-bore gun on the M1A1 / M1A2 Abrams tank, which is a variant of the Rheinmetall L / 120 44-gun, manufactured under license from Watervliet Arsenal.

Since only local manufacturers can apply for XM1147, Rheinmetall has teamed up with General Dynamics Ordnance and Tactical Systems (GDOTS), and its AMP projectile will be based on the current DM11 serial ammunition, optimized for the needs of the US Army.

Rheinmetall has worked closely with GDOTS for many years in the export of 120-mm armor-piercing sub-caliber ammunition with APFSDS-T (Armour-Piercing Fin-Stabilized Discarding Sabot -Tracer) separating pallet.

The M120 829-mm armor-piercing shells have a depleted uranium core and are not currently being exported, so export cores of traditional material will be supplied by Rheinmetall. 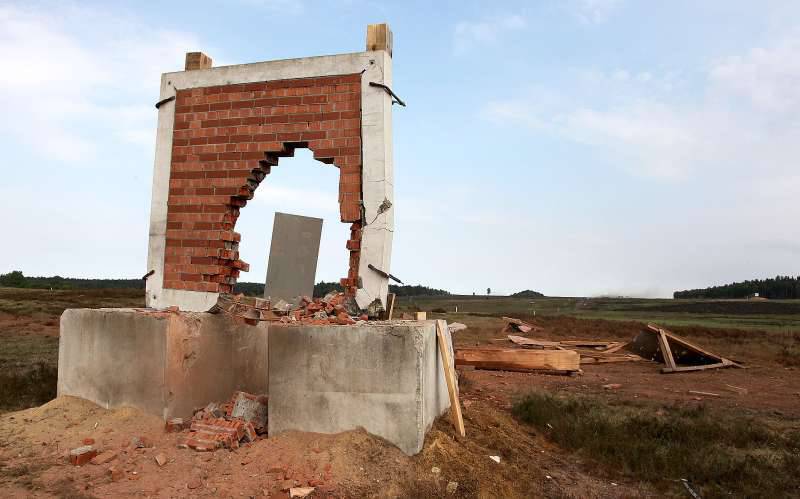 DM11 has been optimized for counterinsurgency operations; its programmable fuse allows you to fight a variety of purposes 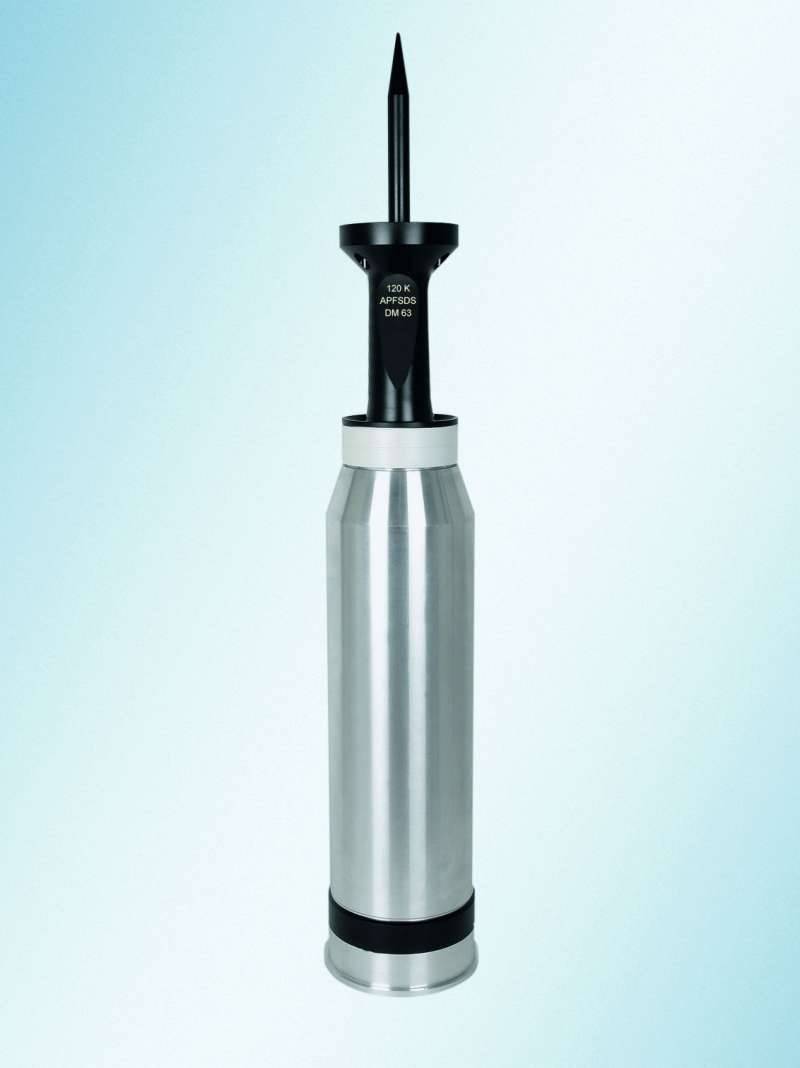 In July 2015, two contractors, GDOTS and Orbital ATK, received a contract for 18 months worth 16 million dollars for the first phase of development and production (EMD 1), followed by the selection of one contractor for the second phase EMD Phase 2.

It, in turn, will be followed by annual contracts for primary and mass production; thus, the total duration of the program will be seven years (subject to continuous funding).

Rheinmetall has so far developed six generations of APFSDS-T type ammunition. The first generation DM13 was followed by the DM23, DM33, DM43, DM53 and DM63 variants. These options have better armor piercing characteristics as a result of a larger ratio of length to diameter and the use of more modern materials. The existing DM53 projectiles were upgraded to match the DM63 specifications to be DM53A1.

DM63 is a latest generation armor-piercing piercing projectile. It has an initial speed of 1650 m / s when shooting from an L / 44 cannon of a Leopard 2A4 and 1720 m / s when shooting from a longer L / 55 cannon mounted on Leopard 2A6 and 2A7. The main feature of DM63 is that they can be fired in the temperature range from -46 ° C to + 71 ° C (climatic zones from C2 to A1) without any deterioration of the ballistic characteristics on the final trajectory, unlike previous projectiles, whose characteristics deteriorated at high ambient temperatures.

A temperature-independent propellant TIPS (temperature-independent propellant system) also (reportedly) significantly reduces barrel wear, especially when shooting at high temperatures. Rheinmetall is currently doing work that could eventually lead to a new APFSDS-T projectile with increased armor-piercing characteristics. The exact details of these improvements have not yet been disclosed. Since this projectile is developed by the company on its own initiative and has not yet been classified by type by the German Ministry of Defense, it does not have the DM prefix, but when using the internal codification of the company, it can be designated RH73.

Rheinmetall confirmed that although no contract has yet been obtained, it is still working on its smooth bore tank gun for lighter tracked and wheeled armored vehicles.

A source in the company said that the armament known as the Rheinmetall RH 120 LLR (Light Low Recoil - lightweight lightly recoiled) L / 47 cannon is currently at the 5 technological readiness level, which is equivalent to a technological demonstration of typical weapons in specified environmental conditions .

Work on the new weapons began in 2003, adding fire power to platforms such as the CV90-120T from BAE Systems Hagglunds and the Polish concept of the PL-01 tank, which was first shown at the end of the 2013 year. These two cars showed the flexibility of the cannon design, since in the CV90 it will be manual loading, and in the PL-01 the loading will come from two six-row turret-type stores. 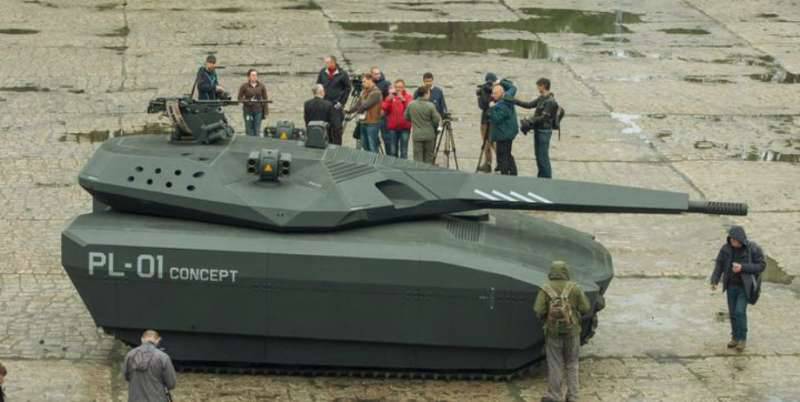 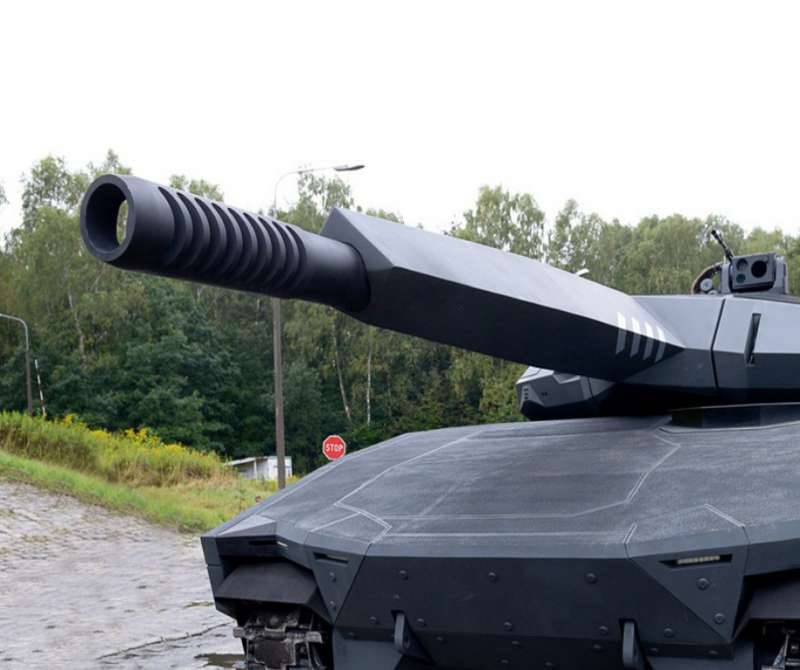 The barrel and the bolt mechanism RH 120 LLR L / 47 are made of steel, which has a greater yield strength and high fatigue strength compared to the steel of the current gun L / 55; they were originally developed for ammunition prospective MBT FMTA (Future Main Tank Armament).

The gun also features a new rollback system, which has an 635 mm stroke compared to the 340 mm stroke of the original L / 44 gun, and a slit muzzle brake, which partially absorbs the shot energy when fired, which allows it to be installed on smaller platforms.

Other features include a system for accounting for the thermal bending of the gun barrel and a lighter electric shutter mechanism.

Design, development and production of tank guns and related ammunition is a very complex process, especially for armor-piercing sub-caliber (APFSDS). However, the evolution of katana homogeneous armor, which itself gave rise to more complex solutions in the field of passive and dynamic protection, gives impetus to the development of new ammunition designed to defeat it.

Although the development of the new 130-mm cannon and the new RH73 ammunition from Rheinmetall has been going on for some time, information on them soon after the appearance of the Russian tanks Armat T-14, whose armor can withstand some DM53 and DM63 ammunition, is hardly possible be considered a coincidence.