In St. Petersburg, is the collection of the commanding staff of all the fleets of the Russian Federation

February 3 2016
21
The official representative of the Russian Navy, Captain 1st Rank Igor Dygalo told the media that a gathering of senior management of the Navy is being held in St. Petersburg fleet Of Russia. Igor Dygalo says that the purpose of such a gathering is to test the level of practical skills and exchange experience between individual headquarters. 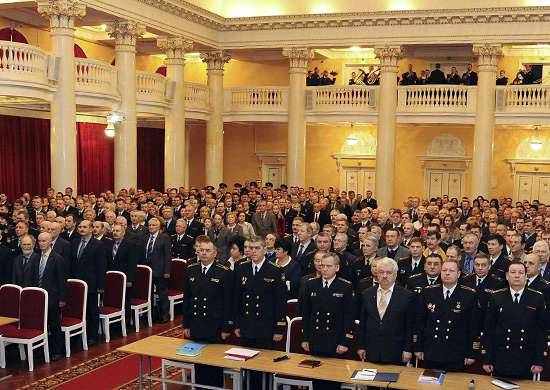 The event is attended by admirals and officers of all fleets of Russia. In addition, the collection touched the commanding staff of the Caspian Flotilla, whose ships had recently been involved in the counter-terrorist operation — from their side, they were hit with Caliber cruise missiles at militant positions in Syria. The gathering began on February 1 and is being held at the Naval Academy "VUNTs Naval Academy". The event will end at the end of this week.

RIA News cites a fragment of the statement of the official representative of the country's Navy
The third day of the gathering is entirely devoted to the verification of the professional and job training of admirals and officers, as well as the verification of the professionalism of the military administration of the fleets upon receipt of introductory information from the leadership of the gathering. In particular, the work of the military administration bodies and the commanders of all degrees in developing the plan and determining the algorithm of actions in obtaining various tasks is checked.

Igor Dygalo reports that fleet commanders must work out a plan of action in the designated area, based on personal command experience and the level of staff training.
Ctrl Enter
Noticed oshЫbku Highlight text and press. Ctrl + Enter
We are
Rocket complex "Caliber". Syria, characteristics and policiesShips of the Caspian Flotilla in Volgograd
21 comment
Information
Dear reader, to leave comments on the publication, you must to register.