Democratic coalition goes to power again with figs in your pocket

February 4 2016
49
Last Friday, the press service of the Popular Freedom Party (PARNAS), on behalf of the democratic coalition, published a statement “On political alliance with the Yabloko party”. With this act, the opposition has demonstrated that it has launched a campaign for elections to the State Duma of Russia. The statement indicates that PARNAS does not consider Yabloko as a competitor and offers it a political union. 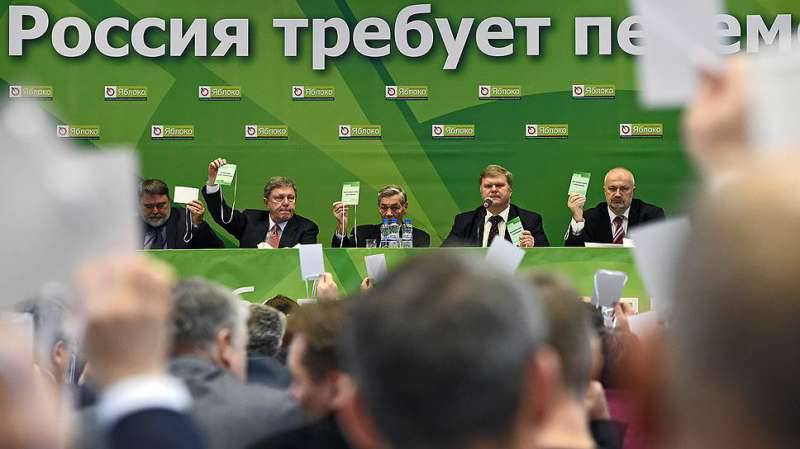 Pre-election fraternization of the opposition

There are not so many differences between the games. But the common goals - like the twin brothers. Here, the founder of the Yabloko party, Grigory Yavlinsky, with stubbornness worthy of a better use, does not tire of repeating that Crimea should be returned to Ukraine. For this, according to Yavlinsky, it is necessary to hold a new referendum under international control and under Ukrainian laws. Then everything will fall into place. “I must say: yes, Crimea is not ours,” insists Yavlinsky, and he can be understood. After all, it was the Galician countrymen of the longstanding leader Yabloko who staged a pseudo-revolutionary orgy in Ukraine and declared themselves to be the national winners. Millions of citizens were faced with a choice: either to give in and surrender to radical marginals, or to defend their identity - national, cultural, linguistic and even confessional.

Crimea made such a choice. Yavlinsky does not like it, and not only him. Last week, the leader of PARNAS Mikhail Kasyanov appeared in Strasbourg, where the regular session of the Parliamentary Assembly of the Council of Europe (PACE) opened. He was called by the Lithuanian politician Emanuelis Zingeris, known for his anti-Russian views and public statements. Zingeris gave Kasyanov an office meeting with journalists, loudly presented as a "press conference of the PARNAS leader in the PACE" and brought him together with Mustafa Dzhemilev who appeared in Strasbourg. The photo of this commemorative meeting is accompanied by a signature, in which Dzhemilev is presented as the representative of the President of Ukraine on the issues of the Crimean Tatar people.

The press conference of Mikhail Kasyanov did not receive any decent coverage. Mustafa Dzhemilev filled this gap on his Facebook page. He cited the statement of the leader PARNAS at their joint meeting. “We are confident that the Crimea will ultimately be released and returned to Ukraine,” he said to Dzhemilev and promised to help with this. Dzhemilev reminds: Kasyanov spoke earlier about the illegality of the referendum held in 2014 in Crimea and even emphasized that “according to the UN Charter, only the Crimean Tatars have the right to raise the issue of self-determination of the peninsula”.

About fraternization Kasyanov and Dzhemilev became known movement "Antimaydan." It asked the Investigation Committee of Russia to give a legal assessment of the statements made by the leader of PARNAS. The lawyers of Antimaydan saw in them signs of a crime under article 275 of the Criminal Code of the Russian Federation (“High treason”).

Like it or not, here are the frank anti-Russian actions of opposition leaders are no secret to anyone. It would seem that in the year of big elections such a position is tantamount to political suicide. However, the rhetoric of Kasyanov and Yavlinsky is becoming louder and more insistent. Probably, they have their own reasons and calculations for that.

How to divide the protest electorate?

In October last year, Levada Center, close to the opposition, conducted a study on the attitude of Russians towards the return of Crimea to Ukraine. 83% of respondents reacted negatively to this idea. “Entirely positively” responded 8% of respondents, “rather positively” - 7%. The last two digits fascinated the opposition, which saw its electoral electorate in this audience.

The results of the research of the Levada Center should be treated with caution. Often he suffers from notorious bias. For example, the last election of the Moscow mayor showed that the Levada Center lowered Sergei Sobyanin’s rating by fifteen percent, while Opposition candidate Alexei Navalny overestimated as much by 35 percent.

However, the opposition has no other guideline, and the October poll inspired optimism. After all, the protest electorate designated by the “Levada Center” theoretically allows the so-called democratic coalition to get into power, at least in a belligerent manner.

Then came the boring arithmetic. She did not bring great joy: even with a friendly vote of supporters of the return of Crimea to Ukraine for Yabloko or PARNAS, the votes of these voters, scattered among the opposition parties, shrank to very miserable percentages. Then the carriers of the idea of ​​a single democratic list came on the scene.

This technique has already been used in elections to the Legislative Assembly of the Novosibirsk Region. There, candidates for RPR-PARNAS had problems with verifying signatures. Without waiting for a positive result, some PARNAS activists wisely moved to the list of the Yabloko party and so took part in the elections. Without much, by the way, success.

Now decided to repeat it at the federal level. PARNAS published its statement on January 29, and the very next day Yabloko responded. His new leader, Emilia Slabunova, agreed to a political union, but stipulated it with conditions. In particular, the associates of Mikhail Kasyanov should support Grigory Yavlinsky in the presidential elections in Russia. PARNAS quickly agreed. This was done by one of the party leaders, Ilya Yashin. It seemed that while Yavlinsky and Kasyanov were busy returning Crimea to Ukraine, their younger partners had successfully created a political union. But no.

A quick glance at the Russian legislation showed that the law “On the election of deputies to the State Duma” does not allow including in the federal list of candidates who are members of other political parties. Having understood this norm, Emilia Slabunova rejected the idea of ​​her opposition colleagues and explained (I quote from RIA News) that the party “Yabloko” is thus obtained; you need to withdraw your candidates - “it’s the same as the party’s self-liquidation, this is some kind of provocative statement, it’s one-sided impression - to attract attention to yourself all the time and to talked about creating informational occasions. ”

A new sharp assessment of the PARNAS initiative by Emilia Slabunova should not be misleading. The leader of Yabloko was not going to quarrel with colleagues at all. Turning to a full turn, Slabunova, on Monday, was again face to face with PARNAS and immediately offered her asset to negotiations on cooperation, using "other forms of interaction - county breeding, information policy, and much more."

How else? The electorate is general, political positions are close to phraseology, and there were no new ideas, which the Russians interested in prosperity of the country would follow together. One thing remains - to divide the territory following the example of the unforgettable "children of Lieutenant Schmidt" in the hope of supporting the undemanding public.

Election campaigns in Russia are usually rich in surprises. One thing is unchanged in them - every time voters come across parties going to the Russian parliament with a fig in their pockets. When behind democratic rhetoric lies essentially anti-Russian goals. This is not even shy. They publicly promise that the transfer of the Kurils to the Japanese, then the return of the Crimea to Ukraine and seriously expect to become part of the political power of the country. We need to firmly grasp: such power can only divide Russia, but I would like to preserve and multiply it ...

Ctrl Enter
Noticed oshЫbku Highlight text and press. Ctrl + Enter
We are
Candidate Yavlinsky: from “normalizing relations with the West” to “convening a Constituent Assembly”Yavlinsky is dreaming of victory over Putin, or Yabloko on a slice
49 comments
Information
Dear reader, to leave comments on the publication, you must to register.