During the All-Ukrainian tribulation, VRU recognized the date of the murder of Petliura

February 3 2016
74
Ukrainian parliamentarians today discussed the formation of a calendar of memorable dates for the 2016 year. As a result, a calendar in which among other memorable dates there are such as “90 years from the day of the murder of Simon Petlura” and “2 anniversary of the rally of the Crimean Tatars for the integrity of Ukraine” was adopted by a majority of people's deputies. Their votes "for" gave 244 deputy of the Verkhovna Rada of Ukraine.


In addition, the deputies of the VRU announced that the dismantled monuments of the Soviet era will eventually be replaced by monuments to the “people's heroes of the Ukrainian state”. Announced that Simon Petlyura - one of these heroes.

For reference: S.Petlyura is a native of Poltava region, at the beginning of 1900's participated in active revolutionary activities. In 1914, Petliura, who was engaged in publishing and journalistic work, publishes material in which he speaks of the need to preserve Ukraine as part of the Russian Empire. According to the then Simon Petlyura, Ukrainians will not succumb to anti-Russian provocations.

And already in 1917, Petlyura declared himself "the general secretary for military affairs of the Ukrainian People's Republic". At the height of the civil war - in February 1919, Petlyura took over as chairman of the UNR Directorate. In April, 1920 Petlyura concludes an agreement with Poland on joint military operations against Russia. 25 May 1926, Petliura was killed in exile - in Paris by the anarchist Schwarzbard (Schwarzburd).

In Ukraine today there are already monuments and memorial plaques in honor of Petliura. One of the monuments is located in Poltava. 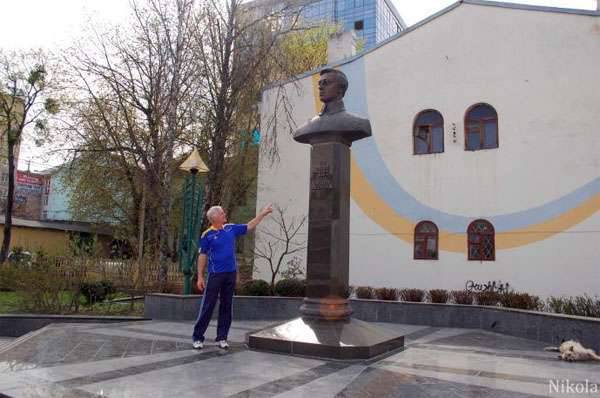 Ctrl Enter
Noticed oshЫbku Highlight text and press. Ctrl + Enter
We are
Syrian girls were photographed for the calendar, which will be presented to the Russian militaryAlpha Calendar for 2013 Year
74 comments
Information
Dear reader, to leave comments on the publication, you must to register.