"Masks of the Revolution": after the final credits

February 4 2016
50
1 February, the documentary of Paul Moreira’s “The Mask of the Revolution” was shown on the French TV channel Canal +. The next day, the Chief Military Prosecutor of Ukraine Anatoly Matios declared the Right Sector illegal armed group with the following wording: “According to all legal constructions, features and according to the Ukrainian constitution, the Right Sector (banned in the Russian Federation) organization is, if dry, legal language illegal armed formation on the territory of the state ". So here! It is difficult to say whether it was a coordinated attack, or the Kiev authorities are trying in this way to disown frank Nazis shown in the film, but the fact remains.. 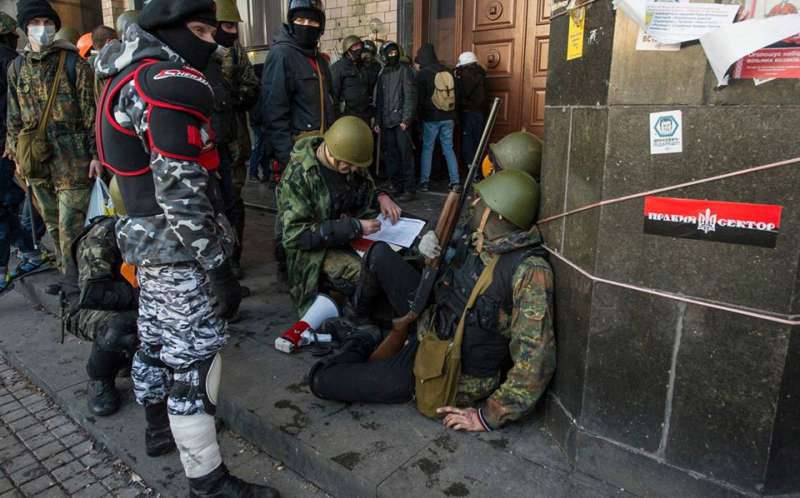 By and large, the regime should have done this a long time ago. The Right Sector has always been on the slippery boundary between ideological fighters and a purely criminal group. Both that, and another represents for management a threat, and till now "to merge" fighters was hindered, apparently, by the CIA, which, according to evidence, supervises extremists on the territory of Ukraine.

By the way, the same 2 of February "Right Sector" accepted the challenge and proclaimed that it was not going to legalize itself under the current government.

“We expressly declare that Poroshenko’s power is a regime of internal occupation. And trying to somehow be legalized in the internal occupation mode is absolutely not what interests us, ”said a spokesman for the group, Artem Skoropadsky.

How this confrontation will end is difficult to say. The official authorities have the levers to defeat the Right Sector, but the radicals are able to deliver a lot of problems, even to the real attempt to seize power. Especially if they manage to enlist the support of influential circles in Washington, as opposed to the forces that now support Poroshenko.

With all the visible disturbance, what is happening is quite beneficial to the current government. They needed the militants during the period of seizure of control over the country: first on the Maidan, and then on the fronts of the east. Moreover, on the Maidan, the “Right Sector” did not at all overthrow Yanukovych, but merely provided an aggressive crowd on the streets, which served as a cover for the coup. In the southeastern regions and in the parts of the Ukrainian Armed Forces that were demoralized at that time, the militants performed exclusively punitive functions, slowly rushing into real clashes.

In general, the film about the "revolution" and the participation of extremists in it came out quite toothless. For obvious reasons, only a small part of all the crimes of the latter-day heroes is mentioned in it. To count now that the French suddenly opened their eyes, and they suddenly became allies of Russia, because in the present realities France remains an absolutely Russophobic country, absolutely naive. Like Germany, by the way.

Most likely, this television stuffing is intended to solve a number of purely tactical tasks within Ukraine. The regime is hinted that he should get rid of the most odious figures of the “revolution” as soon as possible, who occasionally and now appear in a public field, spoiling the image of the young “democracy” with a frankly Nazi flavor.

The moment is selected very well. In Kiev, the antics of the “Right Sector” and similar organizations have long stood across the throat. The benefits of unruly militants are less and less, and the problems - more and more. The claims of the radicals to their own part of the economy and, more importantly, the authorities, are becoming more and more brazen. At one point, they may even seize all power under the slogan that the oligarchs not only led the country to economic collapse, but also sabotage the war with Donbas and Russia. True, the official authorities may not have enough forces to eliminate extremists. Two years of civil war allowed many detachments to arm and strengthen.

For Russia and the besieged Donbass, the situation does not change fundamentally: the two forces that are now participating in the battle for Kiev are equally hostile for us, no matter what they say about the “partnership” from the stands of various kinds of figures. This fact must simply be taken as an axiom and be built on the basis of it all subsequent strategies. And the fate of the Right Sector itself does not play any role here.

Ctrl Enter
Noticed oshЫbku Highlight text and press. Ctrl + Enter
We are
Results of the week. “But is it not enough in Pedro in Brazil ?! And do not count! "Criminalization of Russia. What is the essence of the influence of criminal counterculture on society
50 comments
Information
Dear reader, to leave comments on the publication, you must to register.