Masks of the Ukrainian revolution. Will Europe hear the lonely voice of a man? 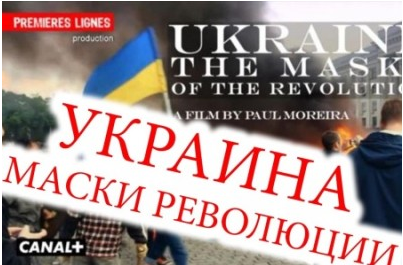 In vain you so sincerely rejoice in the insight of a French journalist and part of Western society regarding the Ukrainian coup. In vain, you also have fun when you see on the social networks an irritated and mournful report of a pottery that he, for example, was not given a visa to the EU or was kept on the border with Poland 8 hours under the contemptuous giggling of Polish customs officers. In vain you hope that the Ukrainian society en masse is showing signs of recovery and, reading payment orders and price tags, shy away from bukhi good fellows in camouflage who are peeking over passers-by, suddenly announces that we believed in false idols and participated in the destruction of our country, and now we are ashamed.


No insights do not smell. All of the above is recognized by the temporary difficulties, the machinations of the Kremlin and the vile intrigues of the god of Ukrainians Putin, the problems of the transition period and the lack of optimism and patience. The people still believe that if it were not for the Russians, Ukraine would have long ago entered the united family of European nations and would have taken such an honorable place there that they would even press the arrogant Lyakhov. Why? Because she wants to.

Myths of modern Ukraine knowingly lined up 25 for years on a monolithic foundation of hatred, envy and silly dreams. They can’t be shaken even by the obvious facts that a little Ukrainian faces every day, having recently removed a colander or a greasy saucepan from his head.

Psychologists know that attempts to loosen negative attitudes with the help of facts, arguments of reason and seemingly inconceivable arguments of logic lead only to concreting of these attitudes - this is how self-defense works, which does not allow attacking rooted, interwoven with thousands of connections, emotionally colored and therefore convenient schemes, which if they were cretins, they seemed to us.

With Europeans, everything is exactly the same. For many years, Europe has adored the freedom-loving Ukraine, for which everything was forgiven — corruption scandals, unscrupulous extortion of privileges and privileges, credits and handouts, nakedly promoted Nazi ideas. Ukraine, which was persistently moved as a democratic alternative to totalitarian Russia. After all, it’s only smart and critical people who understand that Ukraine was loved and cherished precisely because of why they don’t like Russia. Ukrainians not only abandoned their subjectivity and their interests, they willingly gave their birthright to their own right for a bowl of lentil soup, into which anyone just scornfully spits. The Ukrainian political nation has been doing all the years of the Omish ’fetish ал Square’ that it solved the ever-pressing question: who would be more expensive to sell the right of the first night. And the second and third, and all the rest ...

How many I remember the Independent Motherland, so many of our presidents and political, sorry for the expression, the elite was looking for options to move away under the wing of the West, but not to become a subject, a player, and, pushing the elbows of others, as is customary in today's cruel world, to look for their a place under the sun. No, solely for the purpose of finding a suzerain and showing him the soft belly of omega. Under this case all poses of political Kama Sutra were polished and polished to a mirror shine, and Europe, of course, loved this Ukraine.

I remember the delight of Western media in 2004. Flooded with orange news European and American TV channels, the mass of Maidan, swaying in psychedelic trance, the voices of reporters and broadcasters ringing with admiration. In 2013, ecstasy reached degrees of orgasm and remained in this status until recently.

Nothing bothered European intellectuals - neither torch marches, nor burning Berkutovtsy, nor pouring water over the governor in the cold, nor torture, no signs, no obvious Nazi chants, no outright or extremely aggressive xenophobia. Liberals, by definition, obliged to worry about the observance of human rights, looked with complete indifference at the murdered children of Donbass, the burnt down Odessans, imprisoned by critics of the regime. The left, you think, the left otmazyvat the entire Nazi carrion, refusing to point out the monstrous crimes of right-wing radicals.

And so the French showed the film. Wonderful, honest, candid document made by a person decent, accurate and fearless. His personal pain screams from every frame. The Ukrainian Nazis, by virtue of their extreme limitation and Ragulian village arrogance, which still allows them to confidently assume that the whole world is concerned exclusively with their problems, did everything to maximize the premiere. Screams, snot, spreading hatred on the Internet, calls to boycott, curses to the "cursed frogs", flash mobs - all this made the film a completely unprecedented PR. And yes, many people looked at him and were soberly horrified. Among them are European intellectuals, human rights activists, leftists, rightists, everyone.

So what? Pro-Putin propaganda, Kremlin order, anti-Ukrainian propaganda. People, and you also documentary footage shows the comments of the participants in the bloody sabbath, who even today proudly declare that they have burnt the Odessa citizens for the cause and wish that there is little. Bullshit - answer. I don’t cite here the comments of the Ukrainian fashni only because it lies in sight, read and heard by everyone. It amazes only prohibitive, incredible and even touching in its Selyukovsky amateur cynicism dullness. So, one of Svidomo commentators scares the French with the fact that they will be broken again by Russian stars who have driven Napoleon out, and now, apparently, will take revenge for the Ukrainian Nazis.

About them, as they say, and the chickens are not clucking. Much more interesting is the reaction of the most highly moral handshake of the European community, which, according to the author, should realize what kind of demon Western people supported and fed with cookies and compliments.

And this reaction is quite congruent to the moods of their Ukrainian favorites. Western liberals repeat the same arguments as the Ukrainians. Particularly trying to the left, still supplant any information about the true meaning of the Nazi coup in Ukraine. Separate voices of reason and conscience are drowning in a groan - “Putin bought.”

So woke up late, Panov creative and honest Europeans. The French call such belated revelations thoughts on the stairs. Brutal Russians - reasoning in a dog's voice. This film will not add or change anything. Not for this, they built this hut out of shit and straw for years, so that they could suddenly be torn down.

For it would have to admit that at least the last two years the color and pride of the European intellectual elite, its best minds supported an abscess in the center of Europe, encouraged the performers, praised the producers, arrogantly sneered at the critics, that is, exhibited themselves with complete idiots, clearly spitting on the obvious and indisputable, that one could see live, in real time, come and witness in person. The world is in the palm of everyone, come, see, report, who bothers you? At least just believe your eyes and ears, seeing and hearing the documentary evidence of the one who came, saw, heard.

But then you have to realize that you did something worse than a crime, you made a mistake and persist in it further.

What, Putin paid Mark Gordienko, so that he said that they had burned the inhabitants of Odessa correctly, but not enough, that today's pensioners who are dissatisfied with poverty ought to be burned? Or did Putin hire all these hordes of raiders, marauders, camouflage bosotas, psychopaths in balaclava, sadists in embroidered shirts?

It is ridiculous, but it was these European people who for years taught us, journalists, that truth is above all, and the document should be published, in spite of absolutely nothing. And we looked at them with holy trembling, learning freedom and envying courage ...

The situation with the release of a film about Ukraine on TV screens of France, on which too many naive hopes are placed, recalls in general the attempt of historians to turn to the mind of society and cool the passions of professional Russophobes, explaining that not all the repressed were behind politics, that the camps were also collaborators, traitors, punishers, gangsters. That the numbers of the repressed are overestimated many times, and no documents confirm them. What you need to include the mind and soberly calculate, analyze, make ends meet.

Late. Public myths do not overcome, do not adjust. They are long and hard to build, and the point of no return, sure, passed. The Nobel Prize was received by Narvennaya, mean and deceptive Aleksiyevich, and there is no opposition to scrap.

Exactly the same as with the Ukrainian coup. While the Frenchman was making his film, while he was preparing to raise the lonely voice of a man, the Ukrainian artisans skalampotskali hundreds of pretentious handicrafts, arrogant falshaks, tearful melodramas, frail imitations. One of them won an Oscar claim, and I would not be surprised if I receive it.

So it was for nothing that the Klimkina-Chugunkin klohtali, in vain myriad bots were crying out, in vain they jumped out of the trousers - this film is not dangerous for them, alas. Whatever the artistic revelation, the human document, the cry of pain he was - he was late. No matter how much they write about the fact that he supposedly had the effect of a bomb exploded - alas. This explosion will sink in a viscous swamp, the calendar will close this sheet, and the construction of the Ukrainian myth will be continued with the full assistance of the European elite - political, intellectual, and human rights.

Thank you, of course, to the brave Monsieur Paul Moreira, and God forbid him to endure the attacks of a steel will, but Europe, alas, failed the exam.

Vaughn, what a Poroshenko happy from Berlin is back ...

Ctrl Enter
Noticed oshЫbku Highlight text and press. Ctrl + Enter
We are
What you didn't want to know about EnglandDo not chop off the roots of Russian culture
49 comments
Information
Dear reader, to leave comments on the publication, you must to register.