To protect the "democratic space"

February 4 2016
63
The Americans took aim and started shooting already. True, they can't get there yet. The first targets were Russia Today and LifeNews. Both are accused of "propaganda", and therefore the verdict: "Execute, you can not pardon." “Democracy” is designed to stop the information invasion of “authoritarian regimes”. This was announced by Vice President of the Foundation for Democracy Support Christopher Walker. 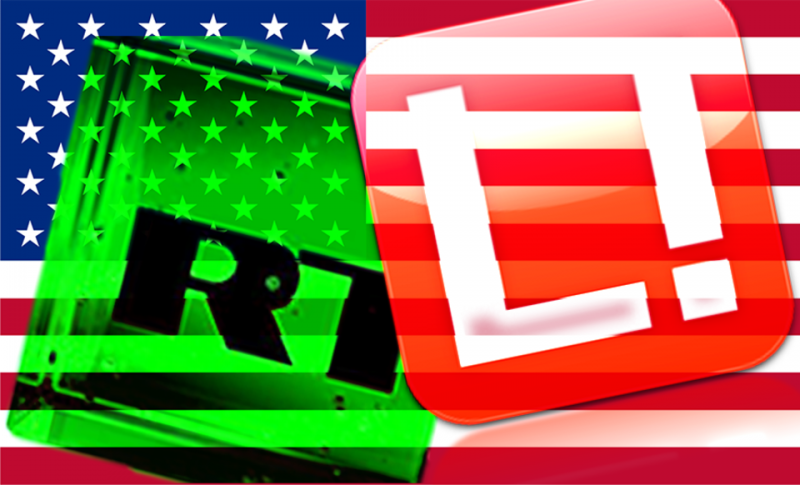 Christopher Walker, who holds the position of vice president of the National Endowment for Democracy (National Endowment for Democracy, NED), called on the United States and the European Union to modernize media resources and revitalize. Western media should successfully compete with the media in Russia, China and Iran - in short, from “authoritarian states”. About this the other day the newspaper wrote "News"referring to a report in the Journal of Democracy, published by the NED.

In a report entitled “Hijacking“ soft power, ”Mr. Walker shared his own thoughts with the public. According to him, if you do not win the information war against the competitors, then the West is threatened with “a dark prospect of an even greater erosion of the democratic space in the coming years.”

According to Walker, the main threats to US influence in the world are Russia, China and Iran. There is also specifics: the Chinese CCTV channel and the Russian Russia Today and LifeNews were announced as the focus of information evil.

Russian media use a set of tools that mirrors the “soft power” of democracy. Here is a list of these “tools”: “nongovernmental organizations organized by the state, zombie monitoring of the elections, foreign aid and investment, and, of course, traditional and new media”. We are talking about the impact on the global audience. And there is nothing to confuse Chinese state television or the Russian TV channel Russia Today with the British BBC or the German Deutsche Welle: after all, the latter work in accordance with a different value system. Editorials of the media in authoritarian countries are accountable to political leaders. Russia Today, for example, consistently follows the Kremlin line, says Walker.

According to him, for a long time, the West did not worry about international media, but now it became clear that the above-mentioned media can influence the audience.

“Although it is more comfortable to think that people in a democracy have natural resistance to propaganda, this is not the case. One has only to pay attention to how the distorted and false arguments about the Russian invasion of Ukraine have provided heated debates in the United States and Europe. ” The author calls on democracies to “renew and renew loyalty to democratic institutions and take steps to stop authoritarian regimes from influencing important regional and global strategic organizations”.

As Margherita Simonyan, the editor-in-chief of RT said in an interview with Izvestia, the popularity of the TV channel abroad is mainly related to the coverage of events that are not fully disclosed by Western media (protest action in Baltimore or the Occupy Wall Street movement). ).

On the Internet, the answer appeared on the LifeNews TV channel to the Democracy Support Fund. Online "RSN" An interview was taken by Anna Mitnovitskaya, host of the TV show “High Voltage,” from Anatoly Suleimanov, First Deputy Director of LifeNews and NewsMedia.

A. Suleymanov said a few words about the “threat” that allegedly represents “propaganda” for the Western democracies. Quote from the interview:

You do not have propaganda, this negative word is for you, it's all clear, but do you influence people? Yes, they say. The note or story you release will be as follows: you will say that LifeNews is pro-Kremlin propaganda. I know that you will do so, you will not write that LifeNews is an independent television channel that is trying to defend some point of view, whether you like it or not. But why do you immediately write to the Kremlin propagandists? We have our own point of view, we defend it. It will be so? Let it be so. Well, you are biased. After all, I know that you will submit this interview, a note, a plot in this way. And how are you then different from the good old word of propagandists? ”

Suleimanov said that television broadcasts on the Internet after Russia are popular in Ukraine and in the United States (“in third or fourth place”).

Nevertheless, the site of the channel is Russian-language, and Suleymanov says that “it is the internal audience that is more interesting to us”. “That's why I said,” he noted, “that it was a pleasant surprise, because we never really counted on the US audience, although there are a lot of Russians there, and they are watching us.”

As for the western impact on the audience, he considers his Suleymanov “powerful”.

“... They act on the law of the strong. Powerful enough money, powerful media, powerful influence. And when you have the opportunity to push your point of view all the time, then you stop reckoning with lines, faces, points of view. Maybe you pretend to listen, but you always have an opinion. A man with his own opinion is the most important propagandist in the world; it’s just the USA. ”

Do the United States and the West in general have the capacity to resist Russia in the information war, that is, to defend their “point of view”? Some Russian experts believe that yes, there is. And to their opinion should heed.

Political analyst Sergei Markov told the newspaper "News"that the West will be able to increase its presence in the post-Soviet space.

“Western countries are able to increase their presence in the countries of the post-Soviet space. They already possess enormous resources. I believe that Kommersant, Vedomosti, Profil and a number of others are under their influence, the analyst listed. - They have enormous resources. Formally, they belong to other persons, but in fact are under the control of the West. In addition, there are the resources of the Russian Service “BBC”, “Voice of America”, etc., etc. They are most interested in the middle class of millionaire cities and young people, as well as elite groups. In addition, if we take Channel One, Russia and NTV, then these channels have pro-state policy, but there are people in editorial offices who read Vedomosti, Kommersant and Internet-critical Internet resources. basis, and their views are close to the opposition. A vivid example is Vladimir Pozner, a man who says that he does not like Russia, that he only earns money here. He occupies a leading position on the channel. And believe me, there are quite a lot of people on these TV channels ready to support the opposition, and on other channels it is enough. At a critical moment, when the management system of the administration is not so serious, they will go over. Our American colleagues are preparing for this moment. ”

To summarize Christopher Walker exposed the "propaganda" activities of the Russians and the Chinese, which creates "threats" to the US global influence. And once such a thing, Washington, and at the same time Brussels accountable to it, should modernize media resources, defending its point of view and competing with the media from “authoritarian states”.

If the West does not win the informational war, it is threatened by the “gloomy prospect of an even greater erosion of the democratic space”.

We think that the “dark perspective” threatens the Western media because of their own stupidity. Films such as the recent BBC biography about Putin’s “riches” are slapped by such amateurs and contain such “evidence” that you wonder. Truly, the BBC must urgently be "modernized." However, this broadcast company ridiculed even Evelyn Waugh. With the modernization is clearly late ...

Observed and commented on Oleg Chuvakin
- especially for topwar.ru
Ctrl Enter
Noticed oshЫbku Highlight text and press. Ctrl + Enter
We are
Results of the week. “But is it not enough in Pedro in Brazil ?! And do not count! "Regime change in the Russian Federation? Why Washington wants to end Vladimir Putin (“Global Research”, Canada)
63 comments
Information
Dear reader, to leave comments on the publication, you must to register.