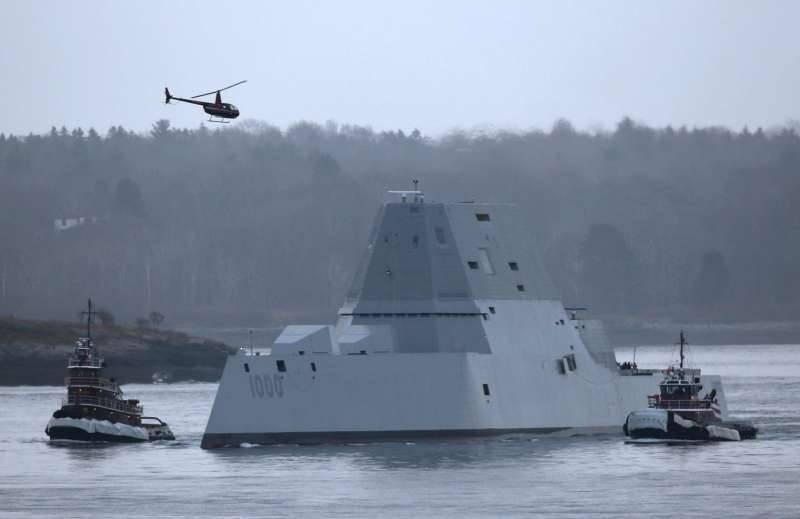 Comments to the articles on the purchase of military equipment usually contain references to the "cutting of funds." But, you see, it is difficult to "cut" millions, if after three years you have to hand over the finished destroyer.

As a result, last year the American fleet received the following list of samples of naval equipment:

Landing helicopter carriers “Mistral” proved to be excessively expensive for service in peacetime. In order to reduce costs, the Pentagon proposed the concept of a military floating base based on a large-capacity civilian vessel. Alaska tanker with cut out tanks; on the lower deck there is a hangar with equipment, on the upper deck there is a helipad. 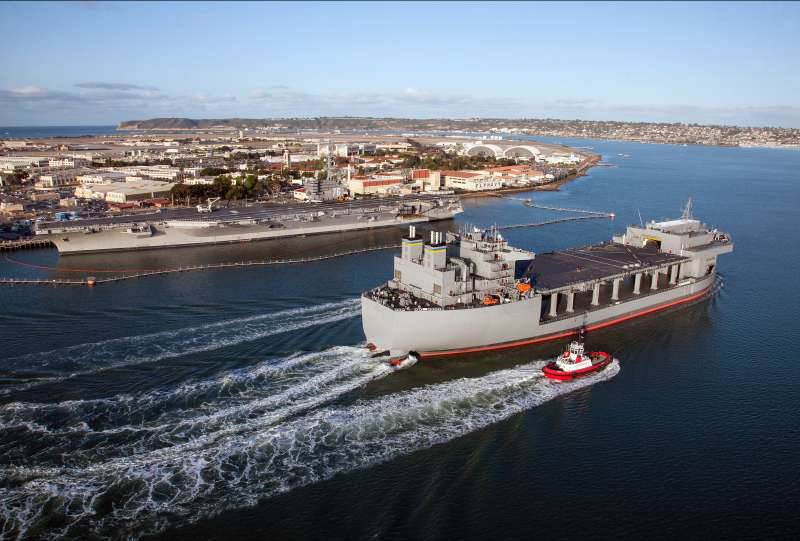 230-meter USNS Lewis B. Puller (T-ESB-3) the size of an aircraft carrier and the cost of 5% of the cost of the destroyer.

The standing crew consists of 34 civilians.

If necessary, the number of crews can be increased to 300 people: flight crew, sailors and special forces. Basic aviation armament includes four heavy combat support helicopters CH-53E (or its mine-sweeping variant MH-53E). On board there is a hangar, a store of aviation ammunition and equipment for refueling with aviation fuel. The power supply system is made according to military standards - with full electric movement and the ability to quickly redirect energy to specifically selected consumers.

The mother ship does not carry heavy weapons, the tasks of ensuring its safety are assigned to ships of other classes. 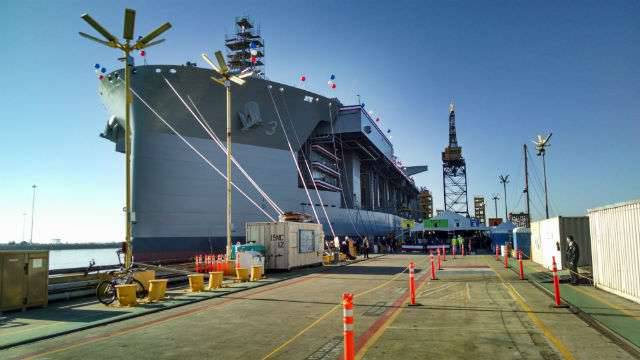 According to the command, the use of such “hybrids” will allow to save the resource of expensive warships and redirect them to solving more adequate tasks.

Last year, the US Navy wrote off their last frigate Simpson, one of the 50 ships of the Oliver H. Perry type, built during the 1977-1989 period. By the time of the write-off, the Simpson was the only existing ship that managed to sink the enemy ship (Iranian frigate Johan). 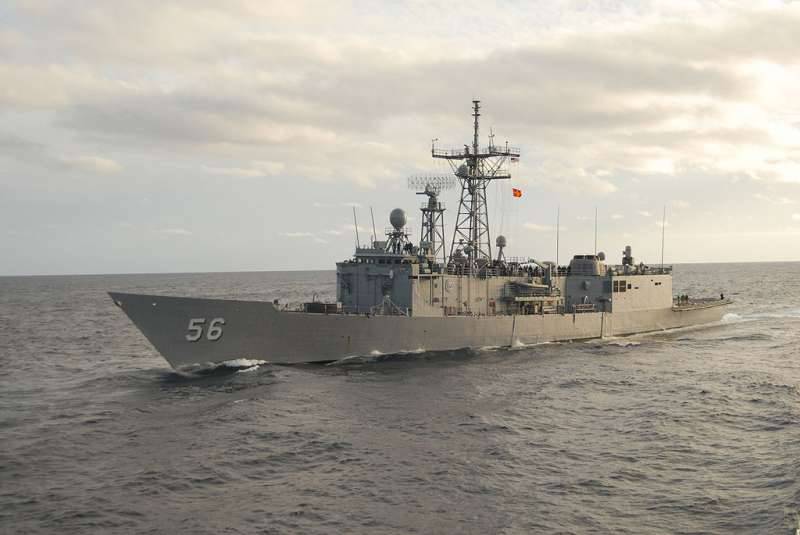 The retirement does not promise peace 30-year veteran - in the world lined up a long string of people willing to buy American trash. Ukraine can become one of the potential buyers.

The old frigates were replaced by LCS - high-speed (up to 45 knots) ships of the coastal zone, combining the functions of frigates, minesweepers, patrol cutters, anti-submarine and small rocket ships. The first 24 LCS (0 sub-series) will be equipped with only the simplest defensive armament and a set of aircraft. Starting in 2019. another half dozen LCS with reinforced weapons should be built (the installation of the “budget” version of the Aegis system) and equipped with additional anti-shatter armor are considered. 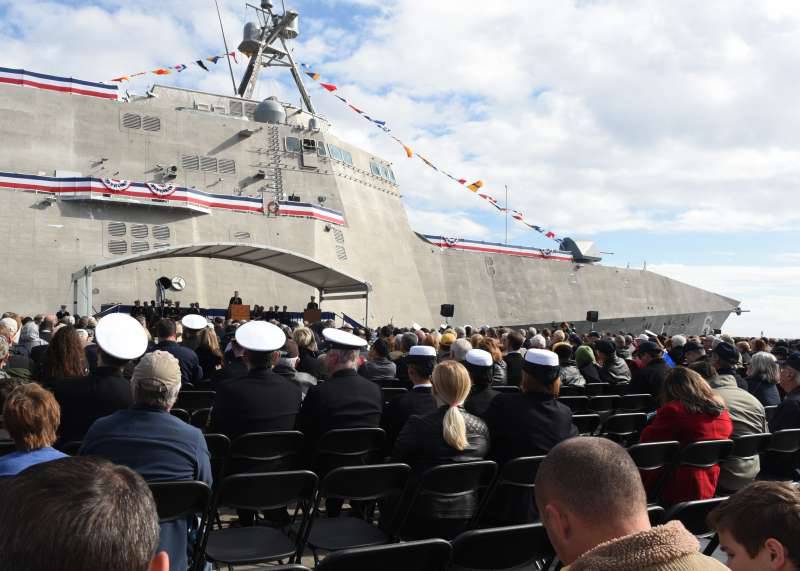 In the past year, the Navy handed over two warships of the coastal zone, the Jackson and Milwaukee, and three more were launched (Little Rock, Omaha, and Gabriel Gifford).

In August, the 2015 was commissioned by the twelfth multi-purpose “Virginia” type submarine, named “John Warner”.

USS John Warner (SSN-785) refers to the so-called. “The third subseries”, created for conducting combat operations in shallow water. Compared with its predecessors, it has a rebuilt nose with a “horseshoe” antenna GUS, most suitable for work at shallow depths. There, in the bow, are two six-shot launch glasses with “Tomahawks” or another target load. 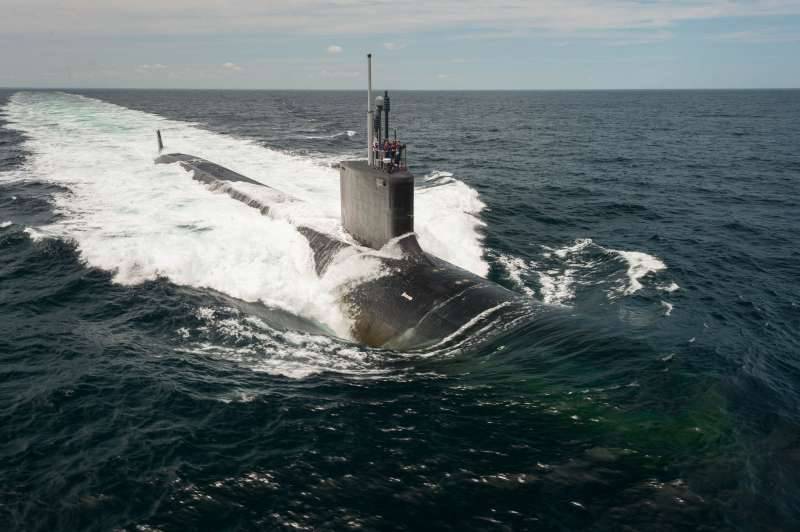 Construction of the submarine was conducted with 2013 year. Noteworthy tactic number “Warner”: 785-I account for the submarine stories American Navy.

Additions to the Aegis family

Last year, John Finn (DDG-113) was launched and Raphael Peralta (DDG-115) was baptized - the sixty-third and sixty-fifth Arl Burk destroyers. The first is named in honor of the hero of the Second World War, the second - in honor of the Mexican marines who died in Iraq and received posthumous citizenship. 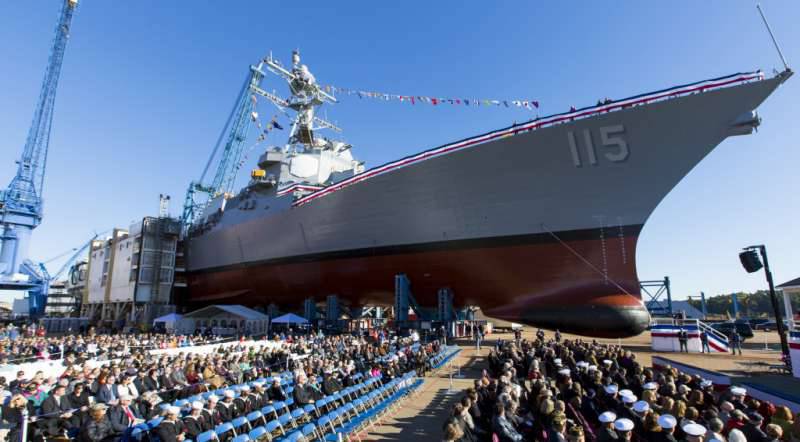 Both destroyers belong to the Restart sub-series IIA. The changes affected the modification of the Idzhis BIUS with increased capabilities for solving missile defense tasks, a new aviation complex with MH-60R helicopters and a set of unmanned underwater vehicles for search and destruction of mines.

The armament of the destroyer is based on 96 rocket launchers and a multifunctional radar with a peak 6 megawatt output power. The Aegis CMS is capable of automatically accompanying hundreds of targets under water, in the air and in space, distributing them depending on the threat they pose and consistently activating the destroyer defense lines.

The cost of these superboats exceeds 1,8 billion dollars. The average construction rate is about three years.

Simultaneously with the launching of Finn and Peralta, last year the next 69 th destroyer Delbert Black was laid down, belonging to the IIA subsection “Technology Implementation”. In the design of this ship will be combined some technical solutions of the destroyers of the future.

In December last year, Zamvolt was put to sea at the test.

Experimental destroyer, built for eight years and promised to make a revolution in the naval business. According to the concept of application, “Zamvolt” corresponds to the class “cruiser” - a large, well-armed ship for single raids to the coast of the enemy.

Being recreated in metal, “Zamvolt” looks different from what its creators represented. Budget constraints did not allow the creation of a new analogue of Ajis, as a result, instead of a multifunctional destroyer, a highly specialized strike ship was built. A bold experiment that embodies the best achievements of engineering.

The unusual shape of the contours - to increase the seaworthiness and reduce the visibility of the destroyer. Turbo-electric transmission with the possibility of flexible redistribution of energy flows (useful in the future, with the appearance of the “railguns”). Perspective radar with active PAR. Combined rocket-gun armament. Integrated automation, which allowed to reduce operating costs and not to put at risk extra crew members. 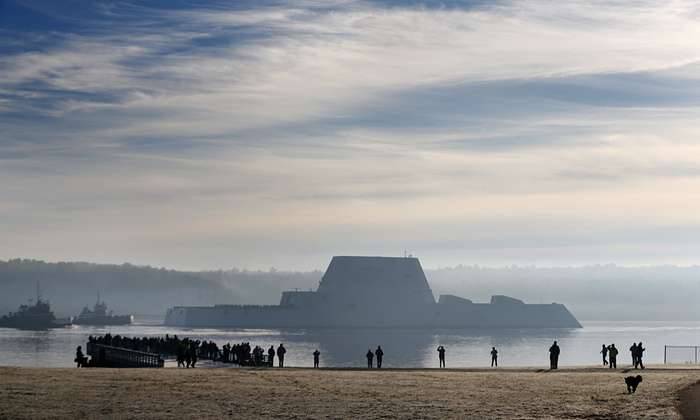 In the coming 2016, the US Navy expects an even more impressive replenishment. Next in line is the Gerald Ford-class lead carrier, the Illinois nuclear submarine, and final adoption fleet two new destroyers - mentioned “J. Finn ”and“ Zamvolta ”. It is also expected to adopt the MQ-4C Triton marine patrol drone, capable of inspecting 30 million square meters in one 4-hour flight. kilometers of ocean surface.

Ctrl Enter
Noticed oshЫbku Highlight text and press. Ctrl + Enter
We are
The state and prospects of development of the naval forces of Ukraine (2013)Amphibious amphibious groups of the US Navy. A bluff or a real threat?
111 comments
Information
Dear reader, to leave comments on the publication, you must to register.