Analysis of events in the world over the past 25 years suggests that information wars are inevitable. Moreover, the escalation of this kind of confrontation is observed and predicted.

In World War I, 25 participated in countries with a population of opposing states 1 billion 474 million. All of humanity in 1914 had 1 billion 700 millions. Over four years, 21,5 killed a million people - 1,46 percent of the warring countries or 1,3 percent of the world's population. In World War II, 55 countries with a population of 1 billion 892 million participated. A total of 2 billion 200 millions lived on Earth. In six years, 71 killed a million people - 3,71 percent of the population of warring countries or 3,2 percent of humanity. That is, the loss of population has more than doubled. In our time, this factor is even more important. The first reason for information wars is the need to continue the fight for world leadership without mass use of conventional means of destruction while minimizing the likelihood that the enemy will resort to WMD.

Since the XV century, the enrichment of the West occurred at the expense of the colonies. Internal contradictions were smoothed out by cheap raw materials and free labor that came from there. Today, the West is faced with a choice: to solve the problem of a shortage of hydrocarbons, forests, drinking water, etc., at the expense of other states or for its own, limiting itself. This breeds aggressiveness and unpredictability. The world community is being imposed the view that natural resources are divided unfairly. But as it is well understood in the West, to redistribute or, more precisely, “squeezing” these riches will have to be achieved through peaceful means in order not to cause damage to them, not to destroy them.

“In the near future, controlled chaos may encompass Kyrgyzstan, Uzbekistan and Tajikistan under certain conditions.”
Increasing competition puts transnational corporations in front of the need to oust opponents from the countries where the greatest investments have been made in order to reset these investments, but without major damage to the infrastructure. Particularly interested in the elimination of competitors and the seizure of new markets oligarchic business, owned by about one percent of the world's population. As you know, 80 families control more than half of the world's wealth.

Information wars are necessary to cover the uncontrolled printing of money and, above all, the US currency in the right amount in order to maintain the exchange rate (“weight”) in order to ensure the possibility of buying up enterprises in any state without the use of violence. The cost of producing a hundred dollar bill is 12 cents. Thus, a seignorage with the release of one such banknote is 99 dollars 88 cents. It is appropriate to recall the ordinary American aphorism: "The dollar is our currency and your problems."

The constant creation of hotbeds of instability in various parts of the world is necessary for the West to meet the needs of the military-industrial complex. Sale weapons carried out at low prices, and then there is a dependence on the supply of ammunition, spare parts, repair, maintenance and disposal of personnel. States and populations in areas of instability are excluded from international politics and cooperation. Over the past two decades, regions of instability (controlled chaos) have been created, in which about 500 millions of people live. This is the majority of the CIS countries, North Africa, Central Europe, the Middle East. The zone of instability has become Ukraine. In the near future, controlled chaos under certain conditions may encompass Kyrgyzstan, Uzbekistan and Tajikistan.

Mitigation of crises, ensuring exit from them with the least losses, and sometimes with great profit, especially for the United States and other NATO countries, has always occurred at the expense of wars, including informational ones. Over the years of the First Worldwide, US export value has more than tripled — from 2,4 a billion dollars in 1914 to 7,9 billion in 1919. The total net profit of American monopolies for this period amounted to more than 34 billion. World War II helped the United States cope with the Great Depression and seize economic leadership. At a time when Europe and Asia were ravaged by war, the United States, on the contrary, had economic growth — GDP more than doubled. The number of industrial enterprises built during this period was over 12 600, the share of the United States in the global manufacturing industry increased 4,3 times. For six years, profits of overseas corporations reached 116,8 billion dollars. Therefore, American historians of the First and Second World Wars in Europe are considered good for the United States. The third world and the collapse of the socialist system as a result provided the United States with an inflow of over a trillion dollars, hundreds of thousands of highly qualified specialists, more than 500 tons of highly enriched uranium, and other valuable materials and technologies. 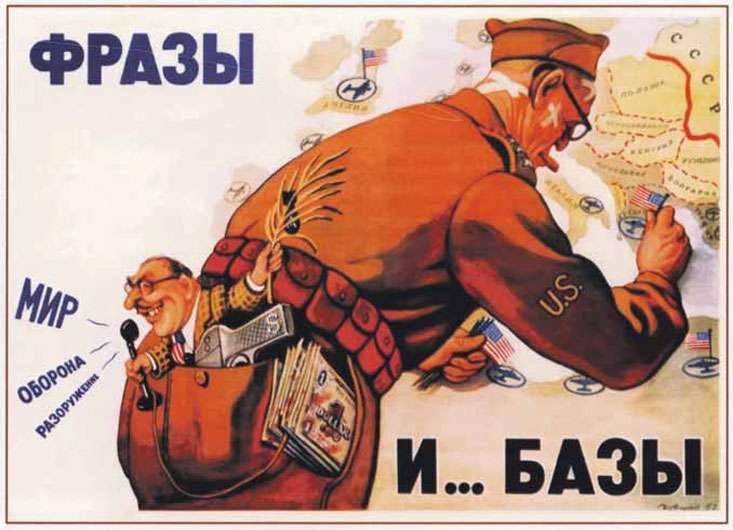 The consistent US movement toward sole global domination requires the constant creation of controlled chaos (a revolutionary situation) throughout the world. The foundations of the hegemony of the United States are laid in the doctrine proclaimed by the fifth US President, James Monroe, December 2, 1823, in an annual message to Congress. Based on this, US interests are global and therefore they will intervene in the events taking place everywhere, by any means.

Building a global liberal society, subordinate to the interests of the United States and the West, denies the existence of sovereignties. The task is to divide large states into smaller ones by means of “soft (velvet, colored) revolutions”, since it is much easier and simpler to manage limitrofi in their own interests. As a result of the collapse of the USSR, 15 of new states was formed, as a result of the collapse of Yugoslavia - six. On the territory of Libya, they may appear three or four, similarly - in Syria and Ukraine.

Without traditional wars with the use of conventional means of destruction, there can be a takeover of huge sums of money and other means taken out by the leaders of a number of states abroad. So, after the overthrow of Muammar Gaddafi in all Western countries on a signal from Barack Obama, a wave of robberies of Libya's bank assets swept. The total amount of assets arrested in March 2011 was close to 170 billions of dollars. Although Gaddafi owned less than 20 percent of these funds, the rest was owned by various Libyan organizations. A similar decision was made by the United States in April 2014 of the year against Viktor Yanukovych. To search for and seize the assets of the fourth president of Ukraine, the US government allocated a million dollars.

Zbigniew Brzezinski, a former national security adviser in the administration of US President James Carter, said: “I don’t see a single situation in which Russia takes advantage of its nuclear potential. She can have as many nuclear suitcases. But since 500 of billions of dollars of the Russian elite lies in our banks, then you have to figure it out: is it your elite or is it already ours? ” According to expert estimates, for the post-Soviet period, about two trillion dollars earned in Russia have been accumulated under foreign jurisdictions. Creating the conditions for the outflow of capital from the zones of controlled chaos to the “safe haven” is one of the goals of the information war. It is clear that only the USA can be a “safe haven”. The American economy is created in such a way as to collect tribute from all countries of the world.

Progress in the service of the aggressor

Today we are witnessing a rapid increase in the number of means of influence on the consciousness and subconsciousness of a person in order to control his behavior. Since the advent of the first such tool - the book has passed more than 560 years. During this period, the corresponding arsenal expanded considerably. Before World War I, there were slightly more than 10. The main ones were the leaflets and the telegraph. During the Second World War, radio and sound were added to them. During the operation of the multinational force against Iraq to liberate Kuwait in January-February of 1991, 25 tools and technologies of information and psychological influences on the enemy’s army and the population of the country were already used. This allowed to solve the task with minimal losses - less than a thousand people (of which 148 Americans). For one dead representative of the multinational force, there were a hundred Iraqis killed. In 2003, coalition losses in the same theater of operations amounted to 172 man, in the war against Yugoslavia in 1999 there were practically none. The current psychological attitudes that exist in the United States and Europe exclude great sacrifices in the conduct of hostilities. 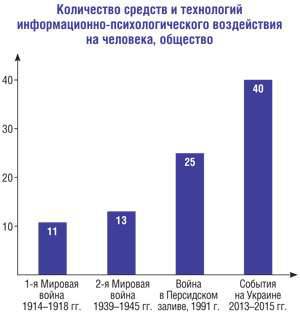 Western hegemony in the field of nano-, bio-, information and telecommunication technologies, science in general creates even more favorable conditions for waging information wars. Any state is vulnerable to them. It does not matter whether it is economically strong or not very large in territory or small, with a democratic or dictatorial structure, has nuclear weapons or not. In the “victim” state, you can quickly create a revolutionary situation through the integrated use of a variety of information tools and impact technologies.

The reluctance of most US and NATO servicemen to die for anyone’s interests, as the results of wars go to completely different people, most often big business, and the growth of anti-militarist sentiment in the United States, Europe, Japan leads, as they say, to lack of boots. the infantry. Therefore, the West is trying to form international coalitions. A striking example is the actions of the United States in Afghanistan from March 2002 to the present. Americans and their allies seek to avoid casualties. Therefore, they did not carry out offensive operations, did not block the Pakistani border, through which supplies of the Taliban went, and in fact did not protect the territory of Afghanistan from them. Who will go on the attack - the most important issue in the US and NATO in modern conditions. Not surprisingly, the United States "threw" Georgia in 2008. This can be done with Ukraine. And for the long term, this will be one of the characteristic features of American politics.

At present, the level of development of intelligence, information technology and information technology tools and technologies of influence, methods and forms of their use makes it possible to wage wars without mass destruction of the population, infrastructure facilities of the state, and death of US and Western servicemen to achieve their goals - political, economic, territorial, military.

That is, initially there was a speaker (agitator, preacher), then a book, leaflet, newspaper, magazine, telegraph, telephone, sound broadcasting, cinema, then radio, television, now the Internet, satellite and cellular communications, computer games, electronic money and It has become possible to fully manipulate the consciousness and subconscious of both man and society as a whole in real time, anywhere in the Earth. The result - millions of zombies with whom you do what you want. Cast his behavior as a dough, on this basis, drive society in the right direction, and consequently, the state or even the whole world.

Ctrl Enter
Noticed a mistake Highlight text and press. Ctrl + Enter
We are
Information War of the First World War. 1914 – 1918Declaration of War. 2 August 1914
10 comments
Information
Dear reader, to leave comments on the publication, you must to register.