The Minister of Defense made a working trip to the Far Eastern Federal District. He visited several military units and defense enterprises. I met with the heads of the regions. What caused this trip head of the military department, what will be the consequences?

The Far Eastern region has a special role in the defense and security of Russia. And not only because the bases of our strategic submarines are located there, the ice-free straits with access to the World Ocean, the stations of the missile attack warning system ...

Beginning with the notorious US Secretary of State Madeleine Albright, Western heralds like to speculate that the Lord God gave Russia too much territory and innumerable natural resources: say, isn’t it time to share with the world community, which is primarily meant by the United States itself. From their own submission, Japan does not leave its claims to the Kuril Islands. Therefore, the region has been and remains in the sphere of special attention of the top military-political leadership of Russia.

“The complex in Vilyuchinsk is equipped with a station for the calibration of radiation monitoring instruments”
Sergei Shoigu began an inspection from Vilyuchinsk, where he checked the construction of piers for the base of new submarine cruisers of the 955 "Borey" project. The head of the military department paid great attention to the commissioned power substation and the completion of the construction of the control and measuring complex, equipped with the only station in the Armed Forces to calibrate radiation monitoring instruments.

Such piers are essentially high-tech industrial complexes. They enable the full life support of submarine cruisers, which significantly increases their energy resource. But if we take into account that the fleet is constantly replenished with new ships, in the future the power of coastal power complexes may not be enough. Therefore, one of the goals of Sergey Shoigu’s trip was to accelerate the construction of such facilities. This year it must be completed. And this will require serious efforts by the industry, the construction complex, the power engineers.

The Minister listened to the reports of the command of the Eastern Military District and the leadership of Spetsstroy, drawing the attention of subordinates to the tight deadlines for completing the tasks. He emphasized that together with naval the complexes should also have ready facilities for social infrastructure, all conditions should be created for military personnel and members of their families, including housing, places in kindergartens and schools. 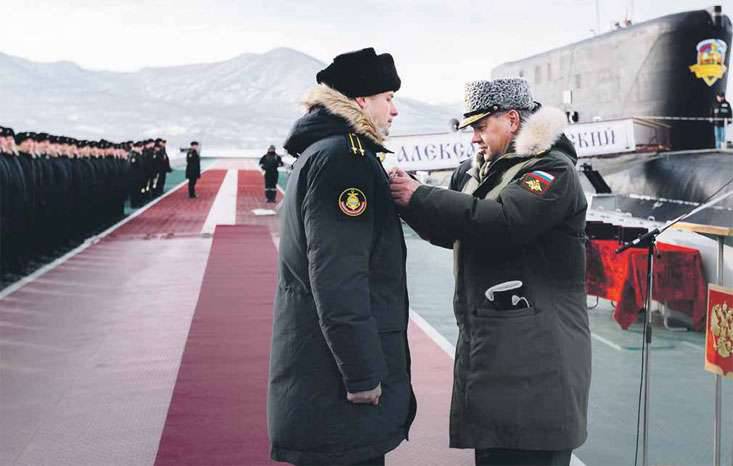 This directive of the Minister, we note particularly. What to hide, in Soviet times and even in the early years of the new Russia, the main attention was paid to equipment and weapons, while the personnel ensuring their use remained in the background. I happened to visit many military camps, which are very far from the capitals, and, alas, from civilization. It was a sad sight. In winter, it was necessary to fight with frozen pipes of heating, sometimes with cables that closed underground, to divert personnel to work in coal-fired boiler houses. Rest after combat duty was simply nowhere. It was believed that people in uniform must endure all the hardships and deprivation. Suppose it relates to the service, but what does the family members, wives and children, civilian personnel. And why should an officer or contract sergeant deal with difficulties around the clock, including at home? Nobody really thought about it. It is not surprising that even the word “social” itself acquired a negative meaning.

The situation has changed. The leadership of the country and the Ministry of Defense came to the conclusion that the servants should be provided with decent conditions. This also applies to combat watch and life.

In Vilyuchinsk, the head of the military department checked the progress of the settlement of residential buildings, which were commissioned in 2015 year. Taking into account the peculiarities of the region, the buildings are built using seismic protection technologies.

The minister visited a family of new settlers, whose head is a submariner serving on a nuclear-powered missile cruiser. I heard the command of the Pacific Fleet about the construction of housing for the crews of new submarines, cultural and leisure facilities. Inspected the renovated gyms, swimming pool, water park of the sports and recreation complex "Ocean".

Sergei Shoigu presented state and departmental awards to the personnel of the nuclear submarine cruiser. In particular, the captain of the 2 rank Sergei Bogachev was awarded the Order for Marine Merit, and the captain of the rank 3 Alexander Moskalenko was awarded the II Degree of Merit to the Fatherland. Another six divers received medals of Ushakov and "For military prowess" I degree. Of course, the Navy Commander-in-Chief could have done all this. But in doing so, Sergei Shoigu emphasized how important for the state and national security are the tasks performed by submariners in long-distance hikes. Every officer and sailor for life will remember the very fact of awarding awards to the Minister of Defense.

The head of the military department recalled: six months ago stories The submarine forces of the Pacific Fleet occurred a significant event. For the first time in the last 17 years, a new-generation submarine, the Alexander Nevsky nuclear-powered missile carrier, entered its structure, and another Vladimir Monomakh will soon take over the military watch. “Technique of this class will become the basis of the marine component of our nuclear triad. During its creation, the latest achievements of military technical thought were applied, therefore it is important that such a formidable weapon were in good hands, ”the minister noted. He wished the sailors good health and successful service for the benefit of the Fatherland.

Naturally, the minister could not help being in the troops of the Eastern Military District. He inspected the construction of combat and social infrastructure facilities for military units deployed on the Kamchatka Peninsula. He listened to reports of the district command on the organization of combat training, the construction of military infrastructure and the maintenance of the technical potential of weapons and military equipment.

Sergei Shoigu set the task of remaking the construction schedules for ammunition and missile stores, in particular, at the Danube arsenal. The Minister analyzed the implementation of a set of works to create a promising system for storing stocks of missiles, ammunition and explosives of the district until 2020. Technical and administrative territory will be equipped with the latest means of protection. And all the ammunition should be contained in the new closure with the maintenance of the established temperature and humidity conditions. This will significantly extend the shelf life, significantly reduce costs. According to preliminary calculations, the expected savings will be tens of billions of rubles.

At the final stage of the trip, Sergei Shoigu checked the organization of the combat duty of the new-generation Voronezh-M radar station, created using high factory readiness technology (VZG) in the area of ​​Usolye-Sibirsky in the Irkutsk region. In the same place, with General of the Army Dmitry Bulgakov, Yury Borisov, Nikolai Pankov and Alexey Dumin, he took part in the scheduled weekly conference call of the Russian Ministry of Defense.

With representatives of the main command of the Aerospace Forces, Spetsstroy of Russia, scientific research organizations and industry, Sergey Shoigu discussed the development of an end-to-end schedule of coordinated actions to commission VZG stations for a promising missile attack warning system (SPRN). He visited the workshops of the NGO Irkut, held a meeting with the leadership of the UAC, and checked the progress of the state defense order. The Minister drew attention to the need for strict compliance and strict control of not only the schedule of deliveries to the troops aviation equipment of various types, but also product quality for the Armed Forces of the Russian Federation.

In conclusion, Sergei Shoigu inspected the Belaya air regiment in the Irkutsk Region, heard the commander of long-range aviation, Lieutenant-General Anatoly Zhikharev, on the progress of combat training and the technical condition of the aircraft. He set the task to complete this year all the activities of the aerodrome infrastructure development plan.

This minister’s trip to the Far East was far from the first, but in its constructive consequences it stands out in particular. The decisions made will have a multiplicative effect and, over time, will have a positive effect on both the increased combat readiness of the troops and the strengthening of the country's defense on the Far Eastern borders.

Ctrl Enter
Noticed a mistake Highlight text and press. Ctrl + Enter
We are
A great interview with Sergey Lavrov: about Ukraine, Obama and IranMilitary reform as an integral part of the security concept of the Russian Federation: Systematic dynamic assessment
18 comments
Information
Dear reader, to leave comments on the publication, you must to register.