Erdogan is not Tamerlan


With the current demand for futurological research, the enormous spiritual, mystical experience of people who had the gift to look into the future remains unclaimed. From time immemorial, princes and tsars going to the army listened to them.

Clairvoyants did not disdain even later, the most famous examples were Hitler and Stalin. There is evidence that current politicians also use the services of custodians of secret knowledge.

Fasting on the aggressor 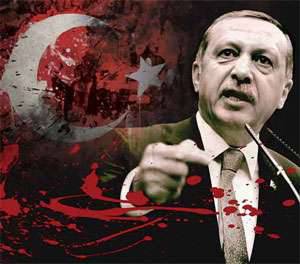 In ancient times, no self-respecting commander dared to take a step before the soothsayers, fortunetellers or magicians around him promised the favor of heaven. The clearest example of our stories - Tamerlan’s campaign against Russia. Having conquered all the nearest countries, passing Central Asia, the countries of the Middle East, the Caucasus, Egypt, India, in 1395, the Iron Chromean moved to Russia with fire and sword. In Moscow, then the son of Dmitry Donskoy ruled - the young Prince Vasily Dmitrievich, who had neither the strength nor the ability to resist the conquerors. To count on someone's help, except for God, was not necessary. And then, on the advice of Metropolitan Cyprian in Russia, a nationwide strict fast was declared, and the famous icon of the Mother of God was transferred from Vladimir to Moscow by a procession.

Tamerlane, who was in the Yelets area at that time, had a dream in which a formidable woman in red appeared, commanding him to turn back immediately. Someone from the environment of the half-world conqueror interpreted the image as follows: this is the Mother of the Russian God, it is better not to get involved with her. Quarreling with the gods was not included in the plans of Tamerlane, and he turned his hordes to the south. This is the story of the amazing salvation of Russia, not only domestic, but also foreign, in particular, Eastern chronicles.

From Abel to Seraphim

Among the most frequently mentioned domestic prophets is Abel. Born in 1757, near Tula, he became a monk, and soon after suffering an illness, he discovered the gift of divination. In particular, Catherine II predicted how much she would be on the throne and when she would die. Infuriated by the insolence of the cherk, the empress ordered that Abel be imprisoned in a fortress. But the date of death he had promised came true. The next object of the monk's prophecies was the emperor Pavel Petrovich. After meeting with the holy elder, he made a mysterious testament, which was to be opened 100 years after the death of the monarch, whom Abel did not fail to remind him. And again was accurate. Emperor Alexander Pavlovich uncompromising soothsayer predicted Moscow surrendered to the enemy, which extended the sentence. Abel died imprisoned in 1831, and Paul’s testament was revealed in the Romanovs ’1901 year. What was said there is not known exactly, but eyewitnesses claim that the august family that day was in a gloomy mood.

The most famous devotees of the spirit, who possessed the gift of perspicacity and revered by the Orthodox Church, should include Seraphim Sarovsky, who, while in the Mordovian forests, knew what was happening in the capital and other places, predicting, for example, an uprising on Senate Square. Having died in 1833, he predicted an unsuccessful Crimean War, a revolution, the death of a dynasty. Seeing further events, even the collapse of the USSR, the holy old man kept a firm faith in the Fatherland. At the end of his conversations he certainly recalled: "The Lord will have mercy on Russia and lead it through suffering to great glory."

"A lot of blood will be shed"

We will not focus on the holy elders, who foresaw what has now become a reality, but turn to predictions that relate to the future that has not yet come. Among them are the prophecies of the famous elder, confessor of the Odessa Holy Dormition Monastery Iona Ignatenko, who died in 2012 year. He, in particular, said that after his death serious unrest will begin in Ukraine and the first after them will be bloody Easter, the second - hungry, and the third - victorious. The elder warned about the war between Russia and America, which will start because of a third country. A lot of blood will be shed, but our Fatherland will win.

Many revered elders, our contemporaries: Seraphim Tyapochkin and Christopher of Tula, blessed Nikolai Trubin, spoke about the restoration of a strong Russia in alliance with the fraternal Slavic peoples led by the single king. And, of course, Jerome Sanaksarsky and Nikolai Guryanov.

The prophecies about Russian-Turkish relations, which six months ago seemed cloudless, include the words of two Greek monks from Athos: Cosmas of Aetolia and Paisius Svyatogorets. Saint Cosmas, who lived in the XNUMXth century, spoke, for example, about iron birds, now peacefully flying through the sky, then spewing fire, - about the present Aviation. He foretold a telephone connection: “The whole world will be surrounded by one string, people will talk from one distant locality to another, for example from Constantinople with Russia.” And this: “Thieves and robbers will no longer hunt in the mountains. They will live in cities, dress like ordinary people, and come in broad daylight to rob you. ”

As for the still unrealized, Cosma predicted the defeat of the Turks, the liberation of Constantinople (Istanbul): “The Turks will reach the six-mile (sea) zone. Of these, one third will perish, one third will believe in Christ, and one third will go to Kokkini Milla ”(place in present-day Iraq).

"The Turks will be destroyed"

Cosme was echoed by Paisius, especially revered in Russia, who died in 1994 year and canonized by the Hellas (Greek) Orthodox Church: “The city (Constantinople) will be given to the Greeks as a result of the war between Russia and Turkey. The Turks will be destroyed and erased from the map forever. It will be divided into three or four parts. ” Once, an old man was asked about events in the former Yugoslavia, and he replied: “Today, for the Turks, Europeans create independent states with a Muslim population (Bosnia, Herzegovina). However, I see that in the future they will delicately divide Turkey itself: the Kurds will rise and the Armenians and Europeans will demand recognition of independence and the right of these peoples to self-determination. Then they will tell Turkey: “We have once done you a favor, now the Kurds and Armenians should gain independence in this way.”

The course of the war can be judged by his statements: “When the Russians descend into the straits (Bosphorus and Dardanelles), then other European states will say: should we not go there? The West will demand that Russia withdraw its troops. She will refuse, and then forces will begin to gather against her. A world war will begin, and the Russians will have losses. We will observe massacres, cities will become slums. ” “Russians will want to enter the Mediterranean. It will be a “spring”. But this is not entirely true. The truth is that God will call them as his warriors. Going down, they will destroy the Turk within one week. And when the friends of Turkey, NATO, come down to save it, then there will be a big clash. ”

“The world,” the elder stressed, “is always governed by the Word of God, neither Americans nor Europeans govern it. They can dominate not for long. God allows them to punish themselves. There will be events that will shake the nations. It will not be the Second Coming yet, but people will return to faith ... ”

Paisius at one time foresaw the collapse of the USSR and the disintegration of Yugoslavia: “The fire that broke out in the Balkans would flare up. The Orthodox peoples of the Balkans will face NATO forces in Turkey, which will disappear from the world map. Cyprus will get a big slap from the Turks, but it will be temporary. Byzantium will be reborn from our roots. ”

Ctrl Enter
Noticed oshЫbku Highlight text and press. Ctrl + Enter
We are
Ticket to TsargradAbout Stalin and Khrushchev
148 comments
Information
Dear reader, to leave comments on the publication, you must to register.