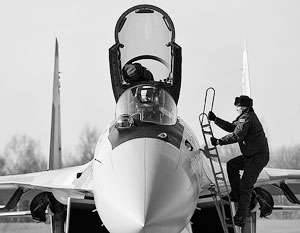 Russia sent to Syria its most advanced fighter aircraft currently in service: the super-maneuverable Su-35С, belonging to the 4 ++ generation. The Russian air group is still seriously inferior in number to the nearby Turkish forces, but its composition allows it to successfully act against both provocations and more serious clashes.


The representative of the Defense Ministry, Major General Igor Konashenkov, confirmed on Monday that the super-maneuverable Su-35C fighters had begun to perform combat missions in Syria.

“Since last week, super-maneuverable Su-35С fighters have begun to perform combat missions at the Khmeimim airbase,” said Konashenkov.
He recalled that, recently, all Russian aircraft perform tasks in the Syrian sky with mandatory cover for Russian and Syrian fighters, as well as modern air defense systems, including the C-400 complex.

Previously, it was unofficially reported that four Su-35S were sent to Syria. They initially became part of the 23rd Fighter Aviation Regiment of the 303rd Guards Mixed aviation divisions of the 11th Army of the Air Force and Air Defense of the Eastern Military District (Dzemgi airfield), and then were transferred to Astrakhan (Volga airfield). However, a few days ago, the Su-35C flew from Astrakhan and through the Caspian Sea, as well as the airspace of Iran and Iraq, reached Syrian Latakia.

Su-35 (according to the NATO codification of the Flanker-T +) - the Russian jet ultra-maneuverable multipurpose fighter of the 4 ++ generation, developed by the Sukhoi Design Bureau, is a deep modernization of the T-10C platform.
The 4 ++ generation, to which the Su-35 belongs, is conditional and only indicates that, due to the combination of characteristics, the Su-35 comes close to the fifth-generation fighter, since, with the exception of stealth technology and AFAR, it satisfies most of the requirements for fifth generation aircraft.

According to experts, Su-35С has no equal in maneuverability among all other modern fighters in the world.

“This machine is able to maneuver at the so-called supercritical angles of attack. The aircraft has a lot of technical “bells and whistles”: a new avionics complex, a new radar station with a phased antenna array, as well as thrust vector-controlled engines, said military observer Viktor Baranets to RIA “News". - Su-35С can perform in the sky what no other machine in the world can do anymore: in the horizontal plane, without reducing speed, perform the “pancake” figure, which dramatically increases combat abilities. This machine surpasses all airplanes of the same class in flight speed - 2400 kilometers per hour. ”

Now the composition of the mixed air group VKS of Russia at Hmeimim airbase exceeds 70 airplanes and helicopters. It includes Su-27CM, Su-30СМ, Su-34, Su-24СМ and Su-25СМ airplanes, as well as Mi-8 and Mi-24 helicopters. By the time the Turks shot down the Russian Su-24, and the militants under their control shot the ejected Russian officer Oleg Anatolyevich Peshkov, Russia had only four Su-27CM fighters in Syria - the command did not assume that the assault and bombing aircraft would have to be covered. Since then, the number of fighters began to increase (the exact number of the military is not called), in addition, air defense systems were deployed on warships.

Turkey has around a hundred fighter jets in the border areas with Syria, mostly F-16. After hitting the Russian 18 aircraft, the Turkish F-16 fighters conducted a major operation to patrol the Turkish-Syrian border. Turkey has over 200 fighters of various modifications. On the one hand, it is more than the forces that Russia possesses in the region, but Turkey is not in a state of war with Moscow, so there is no reason to talk about large-scale clashes. “I don’t think that the Turks will engage in direct air clashes with ours,” said Vladimir Anokhin, Vice-President of the Academy of Geopolitical Problems, told VZGLYAD newspaper.
According to him, the fighters, which are now in Syria, are enough to protect the attack aircraft and bombers from provocations: “I think that the Turks, for all their dastardly inclinations, will not accept this. They have already suffered multibillion-dollar losses from our sanctions. ”

“A group of fighters covers entire areas. Do not necessarily go to the wing of the bomber. Fighter can be in the waiting area and control a huge space and at the slightest danger to advance. We have created a multi-layer air defense, ”said the expert.

He noted that the Turkish F-16 during combat contact has no chance against the Su-35C "neither in range, nor in speed, nor in armament, nor in training pilots."

Ctrl Enter
Noticed oshЫbku Highlight text and press. Ctrl + Enter
We are
What you didn't want to know about EnglandInterview by President Bashar Al-Assad to the Sunday Times
149 comments
Information
Dear reader, to leave comments on the publication, you must to register.