February 11 2016
18
Bayonet knives for Kalashnikovs are an indispensable attribute of any collection of modern cold weapons. A large number of issued blades contributed to the wide distribution of such samples among collectors. However, novice collectors of collections often face legal problems. Bayonet knives are cold weapons, because of which their acquisition and storage is associated with some difficulties. Several years ago, the manufacturer went to meet collectors and facilitated the process of acquiring new "artifacts".


A large number of various types of bayonets have accumulated in the army’s warehouses, which are unlikely to return to exploitation, but are of interest to civilians, primarily to collectors. Sometimes army blades in one way or another, and not always legally, get into private collections, but there was no legal way to obtain such samples until a certain time. The solution to this problem was the release of two types of souvenir bayonet knives. Several years ago, the Izhmash plant, now the head enterprise of the Kalashnikov concern, proposed to all who wished new versions of serial bayonets that were no longer cold weapons.

According to the existing legislation, the blade refers to cold weapons, if it has a number of signs, including certain length and strength of the blade, the presence of hand protection elements, etc. Thus, if several parameters do not correspond to a certain standard, the bayonet can be recognized as a household item. This is the way the authors of the project of souvenir bayonets went in preparation for their release. 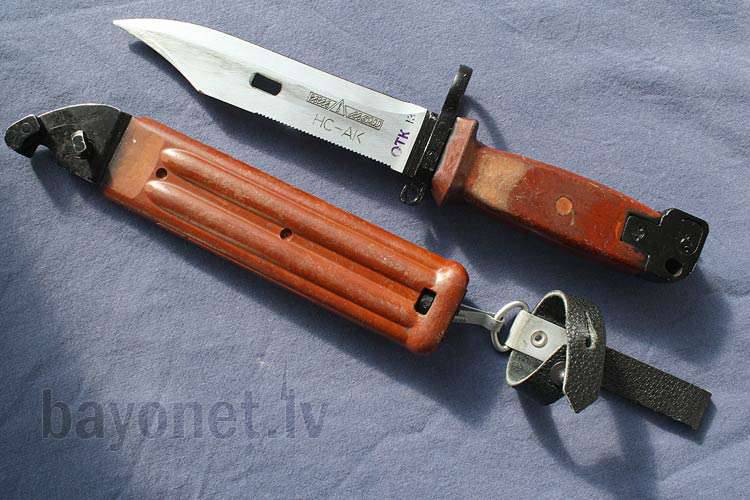 For some time, "Izhmash" produced two variants of souvenir bayonet knives, based on the serial cold weapons. For its production, the bayonets were removed from storage, received a new marking, and were also subjected to a procedure that reduces the strength of the blade and allows them to be transferred to the household category. Thus, collectors and other interested people were able to get a real bayonet for the Kalashnikov, including those released a few decades ago, but to do this without a ton of additional procedures related to special permits, etc.

Souvenir bayonets were produced under the general name “NS-AK”, which could be interpreted as “Souvenir knife - Kalashnikov assault rifle”. In the course of alteration, a characteristic marking was applied to the blades of the bayonets, which makes it possible at first glance to distinguish the souvenir sample from the battle one. On the side surface of the blades there was an engraving in the form of the emblem of the plant (stylized inscription "Izhmash" with an arrow in a triangle) and a large inscription "NS-AK". Such marking was oriented “combat-oriented”: the inscriptions were read correctly when turning the bayonet with fasteners up, as when mounted on a weapon. Souvenir bayonets of the two models had the same engraving with the emblem of the plant and the name. Other indications of the type of souvenir were not provided.

After completing all the necessary procedures, NS-AK underwent technical control and received the appropriate stamp. The mark of quality control was put in ink on the heel of the blade. A new marking for the scabbard was not envisaged, the existing marks were preserved on them. After the alteration, the bayonet retained various marks and marks that were applied during production in the past. Thus, a considerable number of souvenirs at the same time had the stigma of two enterprises, for example, the Tula Arms Factory, which made the blade, and Izhmash, which remade it for free sale.

The main way to change the legal status of the blade was to change its strength characteristics. This made it possible to reclassify cold weapons into a household item, and also not to subject it to drastic modifications, including those that distort the appearance and thereby sharply reduce the collection value. All such alterations consisted in making a cut that weakened the blade. On one of the surfaces of the heel of the blade was made cut to a depth of about two-thirds of the thickness of the metal. The resulting groove seriously reduced the strength of the blade and thus allowed him to meet the requirements for "hozbyt."

Alterations to enter the civilian market were two types of bayonet knives. Samples of type 6X4 were taken from storage. In addition, the bayonets of the model 6X5 were altered (or were produced from scratch on the basis of ready-made components, but with the corresponding nuances). Both variants of souvenir bayonets were called as “NS-AK”. In addition, a souvenir based on 6X4 is sometimes denoted by the additional index “Sat-01”. The refined 6X5 is most often referred to as “HC-AK 6X5”. With respect to 6X4, similar designation is also often used.

Souvenir bayonet knives were made of real mass-produced melee weapons, which gave them several characteristic features. With the exception of markings and weakening the cut, they were, from the point of view of design, a complete copy of combat samples. The shape and dimensions of the blade, the design of the handle, as well as the means of attachment to the machine and the sheath, were preserved. 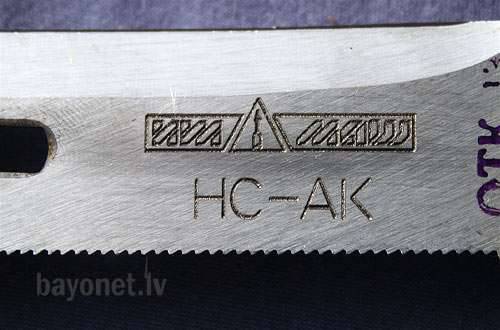 The engraving on the blade, indicating the name of the product. Photo Bayonet.lv

The product "NS-AK Sb-01", being a slightly modified version of the bayonet 6X4, had a blade of a recognizable shape with a butt bevel and two-sided sharpening of the combat end. One edge of the blade kept sharpening, on the second there was a notch-serritor. In its place remained a hole for fastening on the sheath when using a bayonet as nippers. The only change to the blade was the cut, which reduced its strength and did not allow the use of cold weapons.

On the handle of the souvenir knife, the crosspiece with the ring for mounting on the barrel of the weapon and the hook for fastening the strap remained. In its place remained plastic lining handles with corrugated for easy holding. The head of the handle was still equipped with a spring-loaded latch, controlled by a button on the right side (when positioned “in combat”). On the opposite side of the head there was a loop for the strap.

Improvements to the blade did not lead to any noticeable changes in the size and weight of the structure. The total length corresponded to the base 6X4 and was 270 mm with the 150-mm blade 30 mm wide. The weight of the bayonet in the souvenir configuration was slightly less than 250. The difference in weight was only due to the removal of a small amount of metal from the heel of the blade.

Despite the weakening and marking of the blade, the souvenir 6X4 retained the existing sheath, made of an elongated metal part and a plastic lining. The block with fastenings and a cutting edge for using a bayonet with a scabbard as nippers was also saved. On one side of the plastic lining, there were still mounts for a belt system for suspension.

The second variant of the “Souvenir knife - Kalashnikov assault rifle” was made on the basis of the bayonet of the model 6X5. Such a bayonet had a different blade shape with a symmetrical combat end of double sharpening. The main sharpening and a gear file were provided on the cutting edges of the blade. In addition, there was a hole for attaching to the sheath. The handle consisted of a main plastic lining and crosses and latches inserted into it. For attachment to the weapon it was proposed to use a ring on the crosspiece and a spring-loaded latch in the head of the handle. The handle has an ergonomic shape with knurling and several transverse ribs.

Souvenir based on the bayonet 6X5. Photo Forum.guns.ru

The sheath of the bayonet 6X5 was a slightly modified unit from the previous 6X4. The main metal part for storing the blade was closed with a plastic lining and equipped with a unit for use as nippers. For hanging on the strap and fixing the bayonet, there was a loop and a strap with a buckle. The most noticeable difference in the sheath for 6X5 from the older product was color. In the case of 6X4 bayonets, the sheath overlay was made from brown-colored plastic, while black or dark polyamide was used on 6X5.

All improvements of the serial bayonet knives consisted only in weakening the blade design and did not affect the rest of the details. Thus, the products of the NS-AK series were full-fledged mass-dimensional layouts of cold weapons. The possibility of cutting various objects and materials also remained. However, the manufacturer warned of the need for blade care and the undesirability of using a souvenir as a cutting tool. The preservation of fastenings made it possible to install souvenir bayonets on automatic rifles or small arms models of compatible models.

Souvenir bayonet knives were made for several years and were sold without special permits required for the purchase of cold weapons. According to some information, a few years ago the production of such products ceased, because of which, to date, the shops have completed the sale of residual shipments purchased earlier. Information about the possible continuation of the production of souvenirs, of great interest to a wide range of collectors and the public interested, is not available.