February 10 2016
13
In 1989, the bayonet 6X5, designed for AK-74, was adopted. It's cold weapon significantly different from previous models of its class and had a new blade. Nevertheless, some elements of the appearance of the bayonet were borrowed from previous samples. Mounts for installation on the machine, the design of the sheath, etc. it was proposed to borrow almost unchanged from existing weapons. However, another variant of the bayonet could be adopted, having more differences from the finished 6X5.


Unfortunately, the information about this bayonet is extremely scarce and sometimes contradictory. Accurate information about the development time, the main objectives of the project and the production of finished products are not available, and the available data are far from complete and also not always consistent with each other. This situation is further complicated by the fact that some collectors who own such bayonets, express a variety of versions of the "origin" of the weapon. Nevertheless, the available scattered data can be reduced to a plausible version, which will allow at least presumably to present history interesting development.

Among collectors, the considered bayonet is most often referred to as “experimental” or “experimental for AK-74”. The official designation of the sample is unknown. Judging by the time of the appearance of this weapon, it really could have been created to replace the old bayonet 6X4 or the newer 6X5, and also be used on AK-74 assault rifles. Nevertheless, some data on the time of the appearance of such a bayonet suggests that he was not a competitor to 6X5, but became his predecessor. 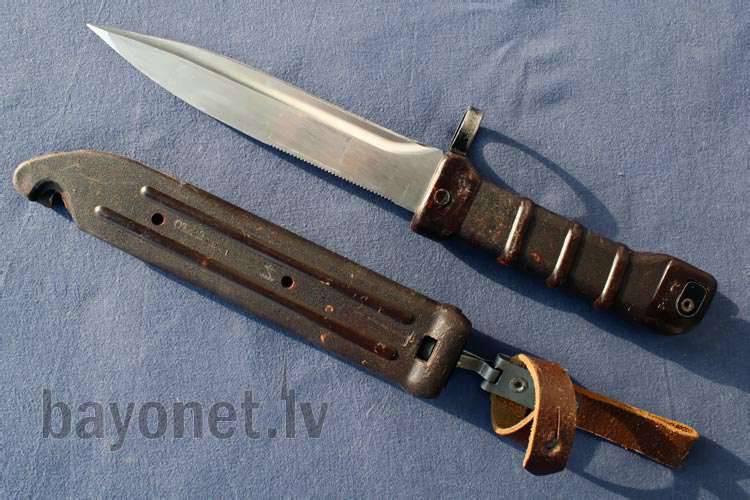 Accurate data on the start time of the development of a promising bayonet is not available. Some sources mention the beginning of the nineties, while others claim that such blades appeared in the troops already in 1987 year. Probably, the "experimental" bayonet really was created in the mid-eighties and could become a replacement for the existing 6X4. However, according to the results of tests and trial operation in the troops, it was decided to change the design of the weapon, applying the available developments, which resulted in the appearance of the 6X5 bayonet in a familiar form. “Experimental” blades, in their turn, became useless to no one, and because of this they went to warehouses and also went to private collections.

Some sources mention another version explaining the emergence of new bayonets. In this embodiment, the bayonet was a simplified version of the product 6X5 and was created in the early nineties. At the same time a number of blades were made. This version has the right to life, but is inconsistent with the mention of the use of bayonets in the army in the late eighties. This allows you to consider it wrong and not true.

Mention of the supply of bayonets to the troops in 1987 year suggests that the "experimental" bayonet was designed to work out some new ideas that were supposed to distinguish it from existing weapons. The main innovations were the shape of the blade and the design of wire cutters for cutting. The new project proposed to abandon the characteristic features of the construction of the 6XXNNXX bayonet, thereby updating the design.

"Experimental" bayonet received a blade with a symmetrical fighting end of a lance-like shape and two-sided grinding. One of the edges of the blade had to be sharpened, on the other, serrated teeth. An interesting feature of the blade was a relatively large thickness, which is why in the area of ​​the cutting edge there was a pronounced bevel, which led to the thinning of the blade. There was a similar bevel on the other edge, on the side of the teeth. Subsequently, a similar blade was used on the 6X5 serial bayonet. In view of the appearance of a new pliers design, it was decided to abandon the hole in the blade. Unlike all its predecessors, the "experimental" bayonet was made solid.

In comparison with the previous samples, the handle has undergone cardinal alterations. It was decided to do it in the form of a large plastic lining, inside which it was necessary to fasten a crosspiece and latch mechanisms for fastening on small arms. Such a lining was a tubular piece of glass-filled polyamide, inside of which there was a channel for mounting on the blade shank and a cavity for fasteners. Outside, thickening in the front and rear parts was envisaged, and the middle one got ribs and ribs, which contributed to a more reliable grip.

In the front thickening of the lining, it was proposed to place a metal crosspiece with a ring for installation on the barrel of the machine gun. The ring had a standard inside diameter of 17,7 mm. To fix the bayonet on the weapon in the lower (on the blade side) side of the head there was a T-shaped slot, under which there was a spring-loaded latch. The latch control was carried out using a button on the right side of the handle (in the firing position).

The total length of the "experimental" bayonet was 290 mm. Blade length - 162 mm. The blade width was 28 mm. The dimensions of the handle were selected in accordance with the ease of use and the design of the universal mountings of small arms used on Kalashnikov assault rifles.

The method of installing the bayonet on the weapon remained the same. The ring of the crosspiece was worn on the muzzle of the barrel or the brake compensator (in the case of the AK-74), and the handle's groove slid toward the influx under the barrel. When the bayonet moved backwards, the handle latch fixed the influx and did not allow the bayonet to move. In the combat position of the bayonet, the double-edged combat end allowed to make piercing blows, and the sharpened edge located above left a limited opportunity to cut. To remove the bayonet, you had to press a button and move it forward.

On the "experimental" bayonet there were universal mounts, developed even for the AKM machine gun. Thus, it was possible to install cold weapons on a number of domestic automata and rifles, as well as on compatible foreign samples. Perspective bayonet could be used with AKM, AK-74, and subsequently with AK-74М or AN-94. In addition, the SVD rifle was equipped with similar mounts, but such a use of the bayonet was considered doubtful a few years before the creation of a new model.

The bayonet knives of types 6X3 and 6X4 were equipped with original sheaths, which expanded their ability to cut various objects. By connecting the bayonet with the scabbard, it was possible to cut the wire, including under tension. To do this, on the lower sheath assembly there was an axis for mounting the bayonet, and a hole was provided in the blade. The blade of the "experimental" bayonet, in turn, did not receive any holes and remained intact. Turning the bayonet and the sheath into nippers was suggested in a different way, for which it was necessary to use the sheath of a new design.

The sheath for the promising bayonet was made of metal and equipped with a large plastic lining. According to others, the sheath was plastic and had several small metal inserts. As before, on the side surface of the sheath there were stiffeners, which also simplified their retention. Above there was a small axis for the suspension system. The latter had a loop for hanging on a belt and a small strap with a buckle for fixing the bayonet in the stowed position.

The new design of the pliers gave the “experimental” bayonet some advantages over the previous models. In particular, the absence of a hole made the blade a little stronger, and the production of the scabbard was simplified by using a minimum of connections between the parts. At the same time, the new bayonet retained all the basic functions of the existing weapon. He could be used in bayonet combat, as well as serve as a knife, saw or nippers.

Not later than 1987 of the year (according to other data, this was already in the early nineties), the Soviet defense industry released a number of “experimental” bayonets. After the factory tests, the products were sent to the army, where it was supposed to conduct a military trial operation. A number of new bayonets hit the units involved in the war in Afghanistan. There, probably, the first cases of the combat use of such weapons took place.

The use of new bayonets in the army allowed to identify all their strengths and weaknesses. After the development of such weapons by separate units of the army, a new stage in the development of a promising bayonet for the AK-74 submachine gun was launched. Judging by further events, the military arranged a new design of the blade and handle. In this case, however, did not receive approval of the new sheath. The military preferred to receive blades with holes and sheaths with tested and tested open mechanisms equipped with a protruding shaft for the bayonet. "Built-in" version of the pliers for some reason did not receive further development. Probably, the low degree of unification of the old and the new samples affected.

In the very near future, Soviet gunsmiths continued to develop the existing structure, resulting in the appearance of a new bayonet. In the updated project, the design of the blade and handle was slightly modified. In addition, sheaths were developed, now based on the corresponding 6XXNNXX bayonet aggregate. In 4, the development of a new bayonet, which received the designation 1989X6, was completed. This product was a reasonable compromise between new and proven ideas, as well as combining the main features of the "experimental" and serial bayonets. 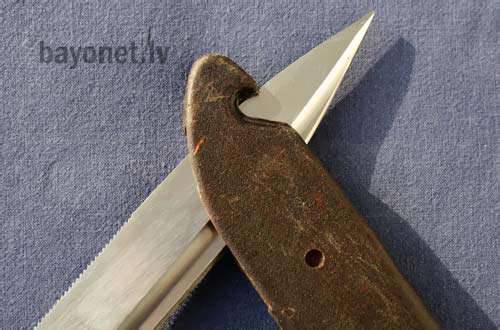 The bayonet 6X5 was put into service in 1989 year, after which its mass production started. Since that time, all AK-74 or AK-74М assault rifles were equipped with only new bayonets. However, newer bayonets 6X5 are still used in parallel with the relatively old 6X4. At the moment, 6X5 is the latest bayonet designed and adopted in our country.

The fate of the "experimental" bayonets was different. After the completion of trial military operation, this weapon was sent to storage, but for various reasons, not all blades reached the warehouses. A considerable number of bayonets of the experimental batches became original souvenirs and “went from hand to hand”. Currently, a number of "experimental" bayonets are exhibits of private collections, but in terms of their number, such samples are significantly inferior to other domestic blades. Due to the relatively small production volumes, “experimental” bayonets are rightly considered to be a collection rarity.

According to some reports, the "experimental" bayonet (or later serial 6X5) became the basis for several models of civilian knives. Such products received a similar blade, but were not equipped with a crosspiece and a latch, instead of which a solid handle was used without additional devices. In addition, they were completed with a simplified scabbard without tools for cutting wire. According to some sources, in the production of civilian knives, blanks from the reserve were used for the mass production of “experimental” bayonets.

As follows from the available data, in the second half of the eighties, the Soviet industry was developing a promising bayonet for equipping AK-74 machines and replacing existing samples of such weapons. The first version of the bayonet reached mass production, but was released in relatively small quantities. The verification of this sample in the troops allowed to establish the positive and negative features of the development, after which the development of the project continued. The result was the emergence of a full-fledged serial bayonet, which not only coped with the tests, but also reached full-fledged supplies to the troops.