Bavarian visit to Vladimir Putin, or how to put Merkel out of the brackets?

February 3 2016
106
While Angela Merkel spoke with Vladimir Putin by telephone, “demanding strict compliance with the Minsk agreements,” Horst Seehofer, head of the government of Bavaria (federal state in the Federal Republic of Germany), was preparing for a personal meeting with the Russian president. It would seem, well prepared and prepared - is it worth the reader's attention to information about the plans of some regional German politician? But the thing is that Horst Seehofer is by no means “some kind of regional politician”, but more than an impressive figure in German politics. 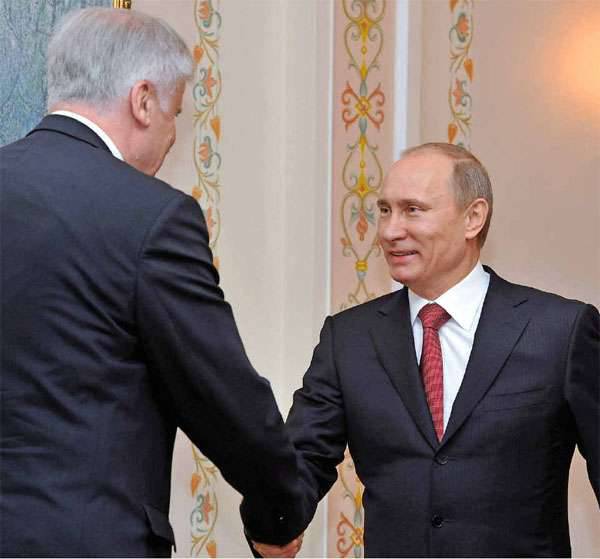 First, a few words of background information about the figure of the Bavarian Prime Minister. Horst Seehofer is a 66-year-old politician who heads the Christian Social Union (CSU). In turn, the CSU is one of two segments of the CDU / CSU faction, which represents the main parliamentary support for the current German Chancellor Angela Merkel. At the same time, lately in the “slender” ranks of the faction, outright disunity has begun to manifest itself, and this discrepancy is associated primarily with the position of the head of the Christian Social Union, namely Horst Seehofer.

If the main non-party opponents of Angela Merkel are the German “Left” (the so-called faction in the Bundestag) represented by Sarah Wagenknecht, recognizable in Russia, then for some time Frau Merkel also has a clear intrafactional opposition in the face of Seeehofer.
What is the essence of his claims to Ms. Chancellor is?

First, Seehofer literally everywhere criticizes Merkel’s position on refugees. And it is possible to understand Seehofer if only because it is through Bavaria, of which he is prime minister, that hundreds of thousands of refugees enter Germany (enter, enter or crawl under the fences). Moreover, up to 24% of refugees arriving in the territory of the Federal Republic of Germany, in principle, they are not going to go further to Bavaria, since in this region of Germany everything suits them completely. In other words, the resettlement of refugees, even within Germany itself, is uneven, and Bavaria is under serious pressure to meet the needs of a large number of immigrants. Earlier, the Bavarian authorities even initiated a lawsuit against Angela Merkel for her “open door” position against refugees from countries in Africa and the Middle East.

Secondly, Horst Seehofer adheres to the point of view according to which not a single major European crisis can be solved without cooperation with Russia. According to Seeekhofer, Russia must be a full-fledged participant in the process of resolving European crises for the simple reason that Europe does not end in Germany, it does not end in Poland, and is not limited to the European Union alone. Seehofer is confident that attempts to isolate Russia from Europe are one of the instruments of influence on Europe itself, which by definition cannot lead to anything positive with respect to Germany.

This position is not just alarming Merkel, it causes a quiet shock. After all, if Seehofer and his CSU will look for a way out of the faction, then, firstly, the days of Merkel as the Federal Chancellor will be numbered, and secondly, this will serve as a serious change in the political landscape of Germany. And before Merkel, her main overseas “friend” sets entirely different tasks.

And against such a political background, Horst Seehofer announced that he intended to visit Moscow and, if accepted in the Kremlin, meet with Russian President Vladimir Putin. The horror in the ranks of the Merkelev CDU has grown from the quiet into the real one - loud. So, Merkel loyal media literally pounced on Seehofer. Some demand that the Bavarian prime minister, whose rating in Germany is already higher than Merkel's rating, immediately abandon his trip to Russia, others threatened Seehofer with informational information, if one may say so, if he meets with Putin. In general, freedom of speech and democracy in action ...

Before his visit to Moscow, Seehofer told his critics through other German media that he "reported on his visit to Russia to Angela Merkel and German Foreign Minister Steinmeier." Like, yes, I warned the "allies" of the "coalition", warned - calm down already ... But supporters of the old woman Angels from the calm in connection with Seehofer's visit to the Russian capital are clearly far away.

Newspaper Kommersant With reference to the press secretary of the Bavarian Prime Minister Rainer Hutku, he says that Horst Seehofer would like to meet in Moscow not only with the President of Russia, but also with the Minister of Industry and Trade of the Russian Federation Denis Manturov, the Minister of Economic Development Alexei Ulyukayev, and the Mayor of Moscow Sergey Sobyanin and Moscow Region Governor Andrei Vorobyov.
The alarm in the camp of those German elites who used to live and work exclusively on orders from overseas, was beaten with a new force. Having seen the names of the persons with whom the Prime Minister of Bavaria plans to talk, in Berlin they said: Guard! Seehofer was going to bypass anti-Russian sanctions and enlist the support of Russia!

The reason for such statements is that the authorities of the federal state of Bavaria had previously stated that they kind of respect the EU’s decision to impose anti-Russian economic sanctions, but at the same time remind that Germany is not only Berlin ... Germany is a federation, and each of its subjects has its own set of laws and its own economic interests. Reducing trade with Russia offered to stop through interregional trade. One of the formulas: trade is not in the “Germany-Russia” line, but, for example, in the “Munich-Moscow” line, because sanctions against Moscow as such have not been imposed. This bold trolling by the Bavarians forced opponents to fidget nervously in their chairs and think about whether they would have to receive directives from Washington on the imposition of sanctions now on each of the Russian cities, especially since the “Seehofer formula”, without advertising it, used in other federal lands of Germany ...

And when Seehofer announced that he was going to Moscow, in the political circles of Germany, he was reminded of the statements in the style “Germany is not only Berlin”. In these very circles, which include, for example, the Free Democratic Party of Germany (SPD), they said that Seehofer "crosses the boundaries of what is permitted," because "it is Berlin, not Munich, that determines the foreign policy of Germany."

German edition The World (link ИноСМИ) writes that Seehofer will be adopted in the Kremlin. Wherein The World writes this: Seehofer will discuss in Moscow the facts of "Russia's intervention in the internal politics of Germany." That is, the “di-Veltovists” are seriously confident that it is about some ridiculous Merkelev-Steinmeier nonsense “Russian interference in the affairs of Germany” ... Although, what else can I write to this “democratic” media? .. Well, don’t they will write in the major German press that Seehofer is going to really lead Germany along the path of pragmatic rapprochement with Russia, which will be an expression of the interests of an adequate part of Europe and, most importantly for Germany, its own interests. They will not write it simply because for such German media the phrase “German interests” acquires the correct meaning only at the moment when the word “Germany” changes to the abbreviation “USA”.

Ctrl Enter
Noticed oshЫbku Highlight text and press. Ctrl + Enter
We are
Results of the week. “But is it not enough in Pedro in Brazil ?! And do not count! "Project "ZZ". The case of Angela Merkel lives and wins
106 comments
Information
Dear reader, to leave comments on the publication, you must to register.