Ukrainian curators are again smoking a cunning plan. Dump off and us, strategists! 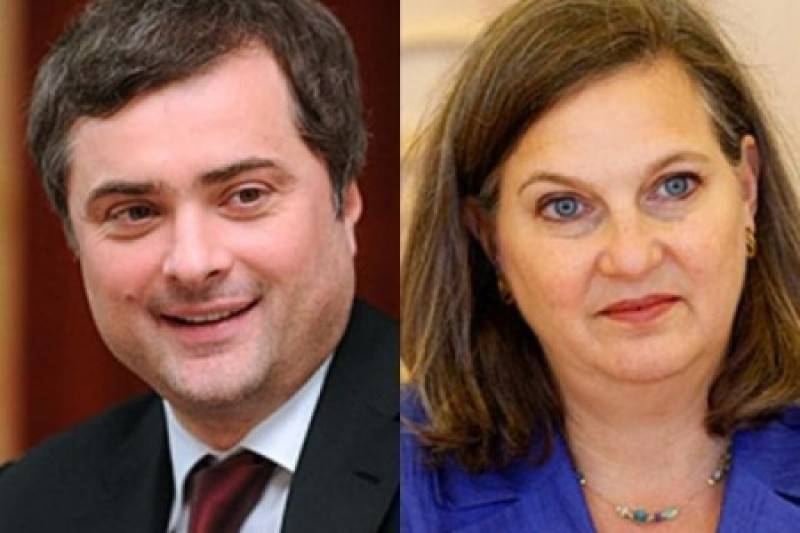 Once the mice came to a wise owl to find out how to keep their livestock during the hunt for them of larger animals that Nemer bred. The owl thought and said - look at the hedgehogs, thanks to their prickles, they are well protected from encroachment and perfectly survive.

My advice is to overgrow with spines. Mice were delighted, ran to perform, but soon saw that the council was not working, despite the enhanced auto-training. Then they screamed - but how, how to do it? The owl thought again and in a brutal form, with the use of dirty obscene vocabulary, answered wearily - go out, mice, I am not a tactician, I am a strategist.

This cute joke is invariably remembered when it comes to various tricky plans to pacify / return / settle / autonomize and even fucking donbass.

The powerful of the world discuss the topic personally, send their emissaries to secret negotiations and brainstorming in neutral territory; couriers chase back and forth with mail and directives; personally Surkov, ayay, what a good man, goes to Lugansk to bend and break local managers on the spot, but the residents of Donbass, apparently, all the blondes, cannot understand the tactics of the process. Either they will be invited to a foreign feast, or they may be allowed to smell from afar, or they will be put on dishes themselves.

Moreover, they cannot understand the meaning of all these consonants of beautiful movements when global players discuss the features of holding elections in each village of Donbass, lists of candidates for mandates and changes to the constitution of Ukraine, which the Verkhovna Rada will accept if, of course, radicals allow it and punitive.

We receive signals about certain agreements, which, allegedly, are already satisfied with everyone (they don’t ask the locals, not before them), but on the day of conciliarity our unique president speaks and again announces that sobornost is unitarity.

And we kind of heard something about the federation, and even about the confederation, not to mention the autonomy of the Donbass, Petro?

Although, let's be honest. None of these respected government devices will solve problems. Well, if only because foreign policy — that in a federation, that even in a confederation — is the prerogative of the central government, and here it is, in front of us, if you do not hesitate. Or, here’s another - give a special status to certain areas of the Donbass, is Galicia and Volyn meekly swallowed this fact?

However, suppose that the process of returning the Donbass to the large family of the Ukrainian people has begun. I remind the locals they don’t ask, it’s not their business, yes.

Strategists describe the stages of the long journey, mark milestones, and the locals who do not ask them, still quietly grumble in their social networks and other public, not to mention kitchens, markets and offices. They really want to know about tactics, they just scream - they say, let's get the details.

Meanwhile, it’s not forbidden to see what happens when the Ukrainian army and punitive battalions enter the cities and towns of Donbass. The testimonies of the magnificent fraternization of the inhabitants of these settlements with the radical patriots who joined them in the Network are full of people who have missed the whole of Ukraine.

The general opinion of the liberators comes down to the fact that local people need and should be treated like garbage, long-humanized biomaterial, which should and should be punished and nightmare always when the winners fall for it. Those who wish can google themselves - looting, humiliation, threats, vandalism, mockery historical memory and values, quick reprisals against insufficiently loyal.

The official line is to rehabilitate with fire and sword, even if virtual, but quite clearly felt by the heightened perception of the locals. Vyshivanki, hymns, loyalist activities in children's and budgetary institutions, hysterical after the celebration of the celebration of Ukrainian socialists of the times of the UPA, heart-rending sobs on the heavy share of the Ukrainian people with an exact indication of the guilty foe. The children from head to toe in ethnography, praise Bandera, mourn the Soviet occupation of Ukraine, expose the Muscovites - under the watchful eye of specially set people. Teachers hide their eyes and howl quietly at home, if they are sure that no one will inform.

The formulas “to promise, and then hang up,” “first the gallows - then the schools” are not being introduced yet, but everyone remembers about them, because the authors, Ukrainian Stranek-Myttsi of the Ragul bottling, distributed them without any doubt throughout the publics, on TV channels, on laps of Ukrainian newspapers, on websites, rallies - further everywhere. Have you heard about the official disavowal of this strategy, and - I understand, got carried away - punishing cannibals, who openly incite hostility and harass the entire psychopathic inter-society public to move in this direction?

I have not heard. The silence of the official authorities so loudly cries that it is impossible to make a mistake - it is this paradigm that will underlie the return of Donbas to the fold to the horror of Nenka who loves him, from whose tight embraces his eyes cling to his forehead. Even with the thought that they are coming. Reeducation, possibly by forced labor under supervision, with interruptions of five minutes of hatred and singing of the hymn. Punish disloyal and tight control over the content of training and education of children. And who will stop them? Who is who?

For example, the topic of elections. Parties, they say, will be sifted. And bad, evil, unkind from the elections pushed. And only good, kind and kind will participate. Immediately the question - and you can see everything? Well, so that none of the members spoke in a boorish way and threateningly addressed Donbass, promised to execute him the Egyptian. I just ask for help from the hall, I can’t think about it myself, I can't find it.

Well, let's say, found. Candidates came to the site to campaign. Can you imagine that they should promise voters such that they are fascinated and believe? To understand - these people do not save their assets and calculate the profits, but in reality they are ill for their homeland. And then here I look at them, such paws - the secret regional Shufrich with a stationary job Brodsky was hidden, it’s one business, they say, they move a couple, and they don’t interfere with them anything ...

Well, let's say, chosen. Let's say worthy. And how will they function in a total hostile environment from royal vodka, protecting the rights of the residents of Donbass in the capital of Ukraine? Do they have at least one chance to be heard? At least stay alive?

But we will leave the sky to the birds, and ourselves closer to the earth. Is it possible to believe that by removing barriers, conditional boundaries, the inhabitants of this region will be able to live peacefully, and not wait for hangers afterwards, saboteurs with grenades, arsonists and other humanist patriots, two years publicly sharing plans to scour, burn and clean?

I again, like those mice, call for a return to the affairs of our sinful, simple and concrete. Step by step, that is, to clarify how this process will look.

Although I can tell a couple of steps - these special Donetsk and Luhansk crawls will instantly come out of the crap, for years they have been pouring shit on the countrymen and calling for them to deprive them of food, water and light, to kill everyone, including babies, in the name of the great Ukrainian unitarity. They will be placed on government bureaucratic positions, so that they can put their ideas into practice, relying on the full power of the security forces ...

And still we will return to the big geopolitical game, to the great brainstorming of the curators. How is it possible that in a unitary, federal or even confederative country, parts of which ferociously hate each other, as written in megatons of evidence, could suddenly begin to coexist quietly - provided that the supreme power of this state did not give any assessment , not a cannibal roundabout and cattle, nightmares Donbass?

Have you heard of the high-profile trials of marauders and rapists? Is one of them sitting? Maybe you had to meet at least some disavowal of fierce diarrhea, for example, Biryukov, did not marginal any, but quite a presidential adviser? Maybe a tactical suggestion was made to Kiev Shaneikhers like portnikov, Kazan, Ivanov, fasteners - clean, Lord, my keyboard after typing these names?

So what? Our curators from all sides, who painted a bullet upon presentation of the layout, as if the real inhabitants were sixes drawn on the maps, built, they say, a new artful plan, the bits of which reach us in retelling, rehashing, leaks, hints, drains and faults. But the details and tactics of implementing the plan still remain a mystery.

Donbass residents wrote in blood on the sand, on the mine rock dump, on dry steppe land, on the concrete slabs of the airport, their disposition in the matter of their own geopolitical positioning, but the powerful people of the world showed them - they are the same object of external influences as Ukraine. Ordered to return.

And so they united. On what ideological basis? What common paradigms do they rule? What will be written in the history books? Or will everyone be different? But then, let's say, go to Kiev to study? To forget everything that was taught at home, and to bandage? In other words - in the name of what to understand and forgive?

And how to share the money? Again, under the howls about the donation and the worthlessness of Donbass, ruin your lives in the chemical industry and in the mines to replenish the state budget of the state that hates you?

I do not know. They say, and it is true that sooner or later everyone puts up. Forget insults, forgive our debtors and offenders, and even murderers. But reconciliation involves some kind of platform, soliciting forgiveness, repentance, admission of guilt. Something, at least a little bit like you catch in the air? Do you read on these fucking flats? See on social networks?

Maybe officials changed the rhetoric? Maybe our president, allegedly, every now and then with his civilized curators is cognizable, even for a moment he regained consciousness and called for public dialogue?

Mira, we all desperately want peace. It is only necessary to understand what it will be, and what we are ready to bring to its altar ...

In the meantime, Surkov, Nuland and the Minsk-Norman comrades who joined them move figures on the chessboard or just play chapayev, mice are desperately trying to spike them - under the evil owl hoot ...

Ctrl Enter
Noticed oshЫbku Highlight text and press. Ctrl + Enter
We are
About Stalin and KhrushchevWhat you didn't want to know about England
69 comments
Information
Dear reader, to leave comments on the publication, you must to register.