165 years ago, 1 February 1851, the first German submarine Brandtaucher ("fire diver"), designed by the inventor Wilhelm Bauer, sank in the port of Kiel during the fourth test dive. The boat, according to its creator, was intended to destroy enemy ships with subversive charges that were attached to their bottoms by hand, with the help of diving gloves sticking out on the sides of the forward turret.

After the Brandtaucher came close to the target, his captain had to push his hands into rubberized sleeves with gloves, unhook a charge of 50 kg weighing outside the boat and somehow (perhaps with the help of a gimlet) attach it to the enemy vessel. After that, the boat sailed back to a safe distance, and the bomb was undermined by a wire electric igniter. But the matter did not come to the test of this original system, since, as already mentioned, the submarine could not ascend shortly after the test began.

The cause of the accident is not entirely clear. Whether a leak was formed in the hull, or a pump that was pumping out ballast water was out of order, or the boat, which had sunk to the bottom, sucked to the ground. Fortunately, it happened at a shallow depth, and the three testers, among whom was Bauer himself, managed to open the access hatch and emerge to the surface. They did not lift the submarine, as Bauer immediately began to develop a new, more sophisticated submarine vessel.

In 1856, this new submarine, called the "Zeetoyfel" ("monkfish"), was built and successfully tested, but not in Germany, but in Russia. However, this is different история. But the Brandtaucher was nevertheless removed from under the water, but this only happened in 1887, when carrying out work to deepen the Kiel harbor. Firstborn German underwater fleet restored and exhibited at the Berlin Navy Museum, and then - moved to the Dresden Military History Museum, where it still stands.
On the screensaver is a sketch drawing of Wilhelm Bauer, from which the Brandtaucher project developed. 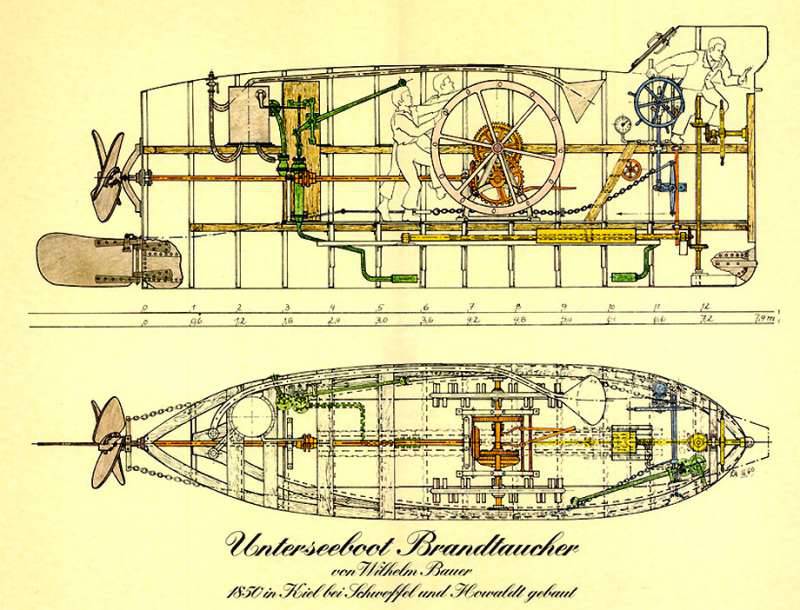 Drawings "Brandtauhera", which is clearly visible his entire structure. The boat with a crew of three was set in motion with the help of two hand-winches that transmitted rotation to the propeller through a gear reducer. This system made it possible to reach speeds of up to three knots, but not for long, since the "motors" were quickly tired at the maximum operating mode.

The wooden frame of the vessel is highlighted in brown on the diagram (the casing was made of riveted iron sheets 6 mm thick), yellow is the 500-kilogram balancing weight transfer system with which the trim was varied, blue is the steering control system, and pumping and pumping water ballast. It is interesting that there were no ballast tanks on the boat, and the water was poured directly into the hull, under the wooden deck. Behind the tank is visible tank for compressed air. 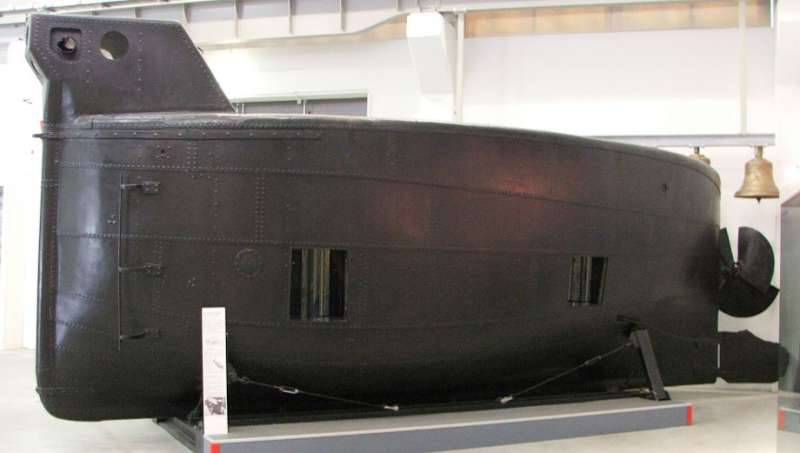 "Brandtauher" in the Dresden Military Museum. Diving gloves and glass side windows are missing.

Ctrl Enter
Noticed oshЫbku Highlight text and press. Ctrl + Enter
We are
Russo-Japanese War 1904-1905's. State of the Russian fleet. Bad luck and missed opportunitiesIcy embrace of the North. Soviet submariners is dedicated
10 comments
Information
Dear reader, to leave comments on the publication, you must to register.