Gogol, Sholokhov and a dog on the fence ... 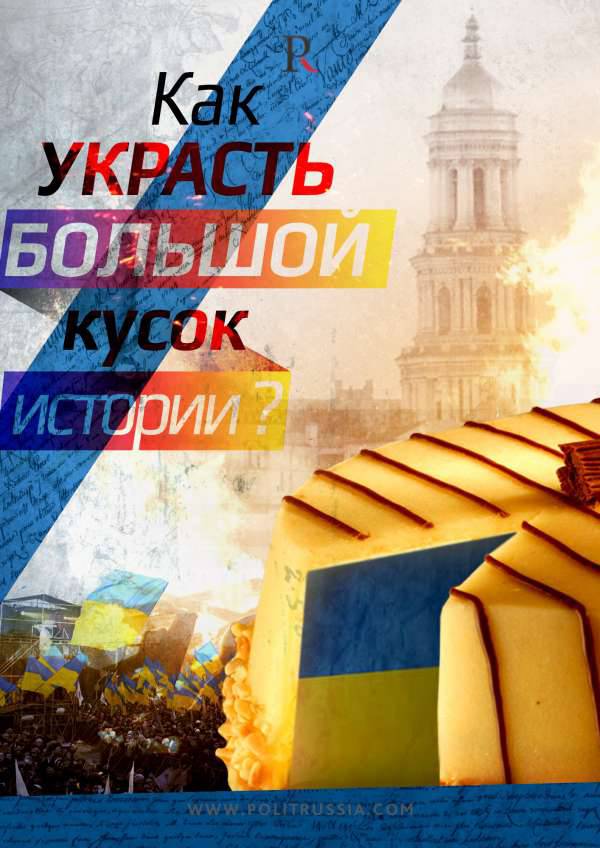 How to steal a big piece stories.

To steal something unnoticed - it is best to do it in front of everyone.

This has been the case for quite a long time and successfully that Russia has been stealing a huge layer of its history, which is now also trying to use it with might and main.

One of the most famous symbols of Euromaidan was the "Cossack Gavrilyuk" - a native of the Chernivtsi province, famous for amateur video, in which stripped Gavrilyuk stands next to several fighters of the internal troops on Grushevsky, one of which gives him a smack, after which the "activist" goes to the car. This video caused a storm of indignation, both among maydanovtsev and in the West. What happened to Gavrilyuk, who was quickly released, was called terrible torture. He was taken away to the SIZO, and then received, though conditional, but a term by a contract soldier of the internal troops, who gave him a cuff who has a small child and a pregnant wife. No one wanted to hear the voices of the security officials, who told that Gavrilyuk's clothes were soaked with the Molotov cocktail mix, and he himself fell into the hands of veveshnikov after he had set fire and wounded an ice pick with several policemen. Nobody cares. Gavrilyuk is now the national hero of Maidan and seems to be even the commander of a new punitive battalion operating in the Southeast. Gavrilyuk's personality is a topic for a separate conversation.

I was interested in another. Namely - its Cossack status. Gavrilyuk was born and spent his whole life in Bukovina - the region, which was for the first time part of Ukraine thanks to the efforts of Joseph Stalin in 1940. At the same time, its residents learned that they, it turns out, the Ukrainians ... After the weakening of this region’s ties with the Old Russian state, Bukovyna was part of the Golden Horde, Hungary, Moldova, Austria and Romania. There were never any Cossacks in these lands, and there could not be any! But in recent decades, the myth of the organic connection between "Ukrainians" and "Cossacks" has firmly taken root in the public consciousness. And so strong that even Ukrainians in the first or second generation (as I said, the grandparents of Bukovina Gavrilyuk probably didn’t even realize that they were Ukrainians) claim the right to be Cossacks. These Cossacks are at least shocking ...

Cossacks in general turned into a saving wand for Ukrainian nationalists and national fascists. Almost the only way to find independent sources of the "Ukrainian nation" and the "Ukrainian state" until the twentieth century. Cossacks, as a phenomenon, are generally given for the stage of the formation of "Ukrainian statehood" in the history books of Ukraine. But, if you look at this issue seriously, then we come across impudent lies and banal theft.

Let's try to list known in the history of the Cossacks. Well, Zaporizhia. Well, let's say, briefly existed Bug. So what is next? Don. Kuban. Terek. Ural. Amur. Ussuri. Volzhskoe. Siberian. There was a Yakut town Cossack unit and a Kamchast Cossack horse team! The list can be continued. But we already got a general idea of ​​the geographical aspect of the Cossack phenomenon. As part of the territories in which the Cossacks lived and acted, the lands of modern Ukraine did not occupy even five percent! The vast majority of the Cossacks are just Russian phenomena!

But why, then, such a symbolic link to Ukraine? Did the Zaporizhzhya Cossacks have any fundamental importance when a Cossack phenomenon appeared? And what relation did it have to Ukraine?

Let's understand the history of the issue. Historians can not make a clear conclusion about the origin of the Cossacks, as such. But practically all researchers agree that this phenomenon is rooted either in the times of the Old Russian state, or even more ancient. Some see them as descendants of the Khazars, mingling with the Russians, and settled in the North Caucasus and the Don after the defeat of the Khazars. Others are the heirs of the black hoods. The third are the descendants of "Slavicized" Iranian-speaking nomads - the Scythians and Sarmatians (this is also indicated by the linguistic data). The fourth see them as "grandchildren" of ancient Russian guardsmen who remained to live in the southern border even after the collapse of the state ...

And what do reliable sources tell us? In the annals of the Kiev period there are no direct references to the Cossacks, although there are many indirect ones.

In 1303, the word "Cossack" in the meaning of "guardian" appears in the dictionary of the Polovtsian language.

1308 is the year from the text from Sugdei (Crimea): "The servant of God Almalchu, the son of Samak, alas, a young man, slain by Cossacks, died the same day."

In the Pskov chronicles of 1406, nicknames and surnames are mentioned - derived from the word "Cossack".

Since the first half of the 15th century, the Cossacks are already regularly mentioned in various chronicles. There are references to the "Ryazan Cossacks" who helped the Ryazan and Muscovites against the Tatars.

With all the desire - there is no binding either to Ukraine, which was not even in the project, nor even to the territory that is today part of it ...

Zaporizhia Cossacks, according to the most courageous estimates, began to form at the end of the 15th and beginning of the 16th centuries.

The beginning of the active work of the Zaporozhian Cossacks dates back to the middle of the XVI century.

And from the end of the 17th century, they began to take an active part in the national liberation (and, rather, the religious liberation) war of the Orthodox Slavic population of the Dnieper region against the Catholic Polish-Lithuanian Commonwealth.

And here the most curious begins - and the most inconvenient for modern Ukrainophiles-European integrators. In the XVI century, as a result of the Brest and Lublin Unions, most of the territory of modern Ukraine was declared Polish, and the Orthodox Church on this territory was reassigned to the Pope of Rome, becoming "Uniate" - part of the Catholic Church. The common people - "buckwheat" - lived with the "European integrators" hard times. From torture, executions, and violent Catholicization, it fled to the Cossacks, who considered themselves fundamentally different from the class, but accepted the fugitives. Thanks to common faith. And also - due to the fact that they were considered ... the same Russian (Ruska) as they themselves!

For 70 - 80 years, the Poles got the local Orthodox so that a global uprising began under the leadership of Bogdan Khmelnitsky on the Sich and Podneprovye.

After a year of successful fights, at the beginning of 1649 of the year Khmelnitsky declared the Poles literally the following
"I am a small, inconspicuous person, but given to me by God, and from now on I am the co-owner autocrat Russian ... I will free all Polish people from Polish bondage, if I fought earlier for myself, then I fight Orthodox today for our faith ... ... Freely to dispose of me there my Kiev, I am the owner and governor of Kiev, God gave me this ... with the help of my sword. "

So here! Nothing more! Getman Khmelnitsky - considered himself Russian! However, as, apparently, and all the other Cossacks. And he also called the lands of modern Ukraine Russian ... In the history books of Ukraine, this is not remembered today ...

Moreover, even from 1648, Khmelnitsky, on behalf of the Zaporozhian people, wrote letters to the Russian Tsar Alexei Mikhailovich with a request to take them "under his arm." In 1653, a “positive response” was given on these requests. And in 1654, the Zaporozhian Army (together with the “land of the Ruska”) according to the results of the Pereyaslav Rada went under the arm of the Russian tsar.

One of the most ingenious works about the struggle of the Cossacks against the Polish oppression is Nikolai Vasilyevich Gogol’s “Taras Bulba”, a brilliant Russian writer born in the Poltava province - and originating from the old Cossack family of Hetman Ostap Gogol.

I don’t need to remind the plot of the story. So here. It never (!) Mentions the word "Ukrainian", as, indeed, "Ukraine". Used to write - "Ukraine" (eloquent difference). But the territory of modern Ukraine, the Cossacks in it are often called it the "Russian land". There is generally a wonderful phrase:

" ... as they did with the hetman and the best Russian knights in Ukraine."
And yet:

“Do you think there is anything in the world that the Kozak would have feared? Wait, the time will come, there will be time, you will know what the Orthodox Russian faith is! Even now distant and close people can sense it: the tsar is rising from the Russian land, and there will be no power in the world that would not submit to it! "

But no one stubbornly wants to see and notice ...

Today, under the pretext of "Ukrainians" of the Cossacks, hotheads from the "Right Sector" and other similar organizations make claims to the Don and the Kuban. Like, once the Cossacks - that means the Ukrainians.

But how would the local Cossacks themselves react to such claims? Open now Sholokhov

"He sat on a horse with an awkward landing inherent in non-trials, rattled his elbows in a trot, and, accompanied by the annoying cries of the Cossacks playing in the alley, rode with a trot.

“Male on the fence! ..” the children shouted after him. "

What is unity ??? Immediately felt the Ukrainian spirit ...

"That is why we went to the station severally together and then, meeting in the steppe, weren't afraid to enter into an altercation.

- Hey, crest! Let's go on the road! You live on a Cossack land, a bastard, but do not want to give way to the road?

The Ukrainians, who brought wheat to the Don on the Paramonovsky dumping, also had a hard time. Here the fights began without any reason, simply because the "crest"; and the time "crest" - it is necessary to beat. "

The difference, of course, rather, is not national - but the estate. They treated this way to "non-Cossacks", peasants who came from the West, but the fact itself is very characteristic.

The Cossacks, the great Cossacks, including the Zaporizhzhya Cossacks — whether someone likes it or not — is a Russian phenomenon. And the Euro-Ukrainianism that is being preached now in Kiev and Lvov has nothing to do with it. And putting on the Cossacks maydanovtsu Gavrilyuk from Bukovina is the same as putting on pirates or cowboys. The latter, by the way, in view of the values ​​being preached and the origin of sponsorship, would be much more appropriate.

Our story is a part of us. And - hardly the most important. Allowing to steal it - we put the enemy in the hands weapon against yourself. And, speaking the truth, we win.
View all:

Ctrl Enter
Noticed oshЫbku Highlight text and press. Ctrl + Enter
We are
About Stalin and KhrushchevWhat you didn't want to know about England
42 comments
Information
Dear reader, to leave comments on the publication, you must to register.