The Golden Age of the Russian Medal

February 6 2016
4
The epoch of Catherine, brilliant in many respects, can rightfully be called the "golden age" of the Russian medal - so numerous and varied are the works of medal art that have come down to us of that time. Let's start with the coronation and historical medals. 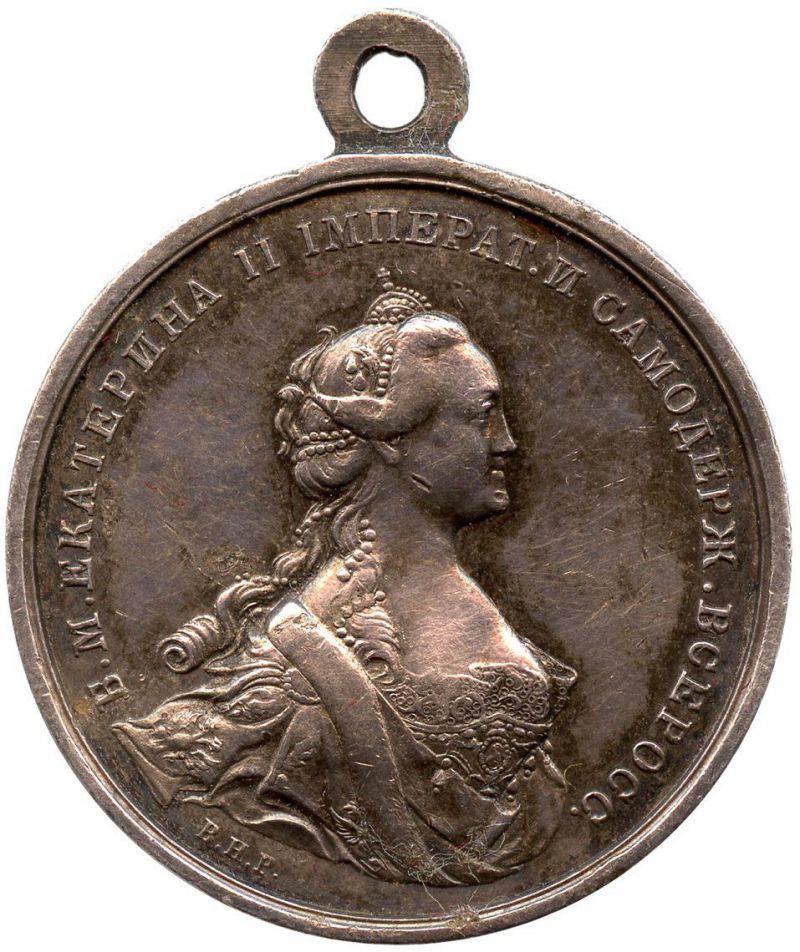 Coronation Medal on the occasion of the ascension to the throne of Catherine II
Two months after the June revolution (the new style is 9 July, but let us, as in the case of the October Revolution, adhere to the historical naming), which put an end to the 186 day rule of Peter III, his resolute spouse, by that time, by an amazing coincidence, widowed , arrived in Moscow for coronation celebrations.

A special commission led by Prince Nikita Trubetskoy, President of the Military Collegium, worked in the First Throne for glory: as soon as the procession through the city was erected, as many as four triumphal arches, patched pavements were laid, the facades of houses were prepared, large-scale was prepared, as they would say now, pyrotechnic show.

The festival, which ended on September 22 old style in the Kremlin, was placed on the head of Catherine of the imperial crown, decorated with 58 with large and 4878 with small diamonds, described in the literature in detail, we are also interested in the message that the guests were handed out coronation medals at the Lucula feast in the Faceted Chamber. Although made them in a hurry, but the performance was at first glance quite satisfactory. On the obverse - a portrait of Catherine in a crown and mantle with the state emblem.

The author of the obverse is master Timofey Ivanov, as follows from the signature below: “TIF”.

The multi-figure reverse quite deserved this magnificent description in Sergey Solovyov’s History of Russia from Ancient Times:

"Orthodoxy and the Russian Fatherland, saved by the heroic spirit of its Majesty from threatening disasters, joyfully erect a shield decorated with oak leaves with the name of Her Majesty, on which God's providence imposes the imperial crown, in front of it stands a smoking altar with an image of spiritual, military and civil rank signs, to which the Russian Fatherland pours incense into the expression of nationwide prayers and zealous desires for the long life and prosperous statehood of the most monarchy and savior. ”

The inscription above: “FOR THE SALVATION OF FAITH AND FATHERLAND”, under the edge at the bottom - the date according to the old style. The reverse of the work of “S.Yu.” - master Samoyly Yudin.
Especially noteworthy, of course, is the upper inscription, which mentions the salvation of faith. With the salvation of the Fatherland, everything seems to be clear: Catherine overthrew her own husband, the Prussian puppet, whom King Frederick ruled from Berlin through his envoy to Russia Heinrich Leopold von Holtz. True, this very puppet shortly before the notorious death from “hemorrhoidal colic” managed to sweep two most interesting decrees - our historian Nikolai Karamzin called them nothing other than “glorious and immortal”. Those were manifestos about the liberty of the nobility and the destruction of the Secret Investigation Affairs of the Office.

However, this is what version of the appearance of the first manifestos from the words of the former secretary of the emperor Dmitry Volkov was recorded by the historian Prince Mikhail Shcherbatov in his note “On the damage of morals in Russia”:

“Peter the Third, in order to hide from the Countess Elizaveta Romanovna (Vorontsova, favorite of Peter. - M.L.), that he would have fun with the import (Elena Stepanovna Choglokova, later Princess Kurakina), told Volkov in her presence that he had this very night to forward in the performance of an important case known to them in the reasoning of the beautification of the State. The night came, the Sovereign went to have fun with Princess Kurakina, telling Volkov to have some noble legalization to write to him tomorrow, and was locked up in an empty room with a Danish dog. Volkov, not knowing neither the reasons nor the intentions of the State, did not know what to write, but to write. But as he was a quick-witted man, he recalled the frequent eruptions of the Sovereign from Count Vorontsov about the freedom of the nobility, Sedshi wrote a manifesto about this In the morning, he was released from detention, and the manifesto was tested and publicized by the Sovereign. ” 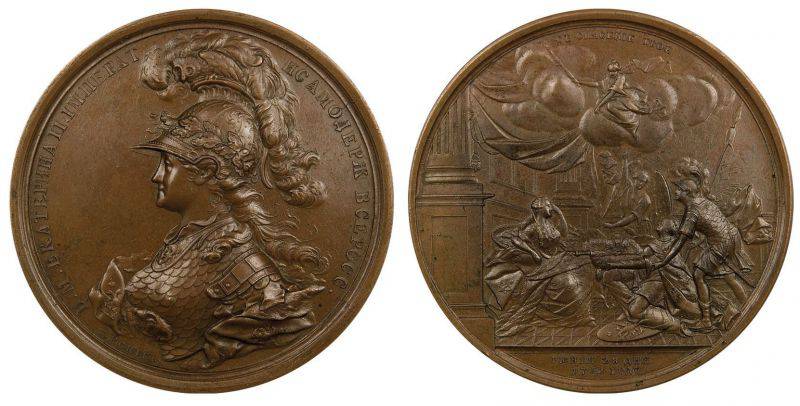 Medal "In commemoration of the accession of Empress Catherine to the throne"
In the manifesto of Catherine on the occasion of her accession to the throne, of course, her men’s merit before the nobility did not say a word, but the ousted emperor was accused that “our Greek church was already extremely exposed to the last danger of ancient Orthodoxy in Russia and acceptance of a different law. " What is the Lutheran Karl Peter Ulrich, crossed, like his treacherous wife, to Orthodoxy, quite openly, however, neglecting church rituals, but at the same time immediately after the accession, he stopped the persecution of the Old Believers when Tsar Alexei Mikhailovich was seriously “ Greek Church ", except for the secularization of monastic lands? Moreover, his cheerful widow calmly continued the secularization and successfully completed it.

Is this not a question that explains the emergence in five years of a new medal, in the creation of which the monarch has already taken a direct part, “In memory of Empress Catherine's accession to the throne” Medalist John Georg Wahter depicted Catherine on the obverse in the guise of Minerva, wearing a helmet and cuirass. The owl on the helmet, symbolizing wisdom, was supposed to demonstrate the advent of the era of enlightened absolutism.
A familiar inscription appeared in a circle:

But on the back side, where the moment of the presentation of the crown to Catherine II by Russia in the image supported by Saint George (easily recognizable by the unchanging spear) of a kneeling woman, there are no absurd words about the salvation of the faith. The replica comes from the figure of Providence soaring in the clouds. Pointing to Catherine sitting, Providence turns to Russia:
"CE RESCUE YOURSELF."

Medal released in large quantities. Some copies inserted into elegant snuff boxes were presented as a gift to the main participants in the 1762 coup, for a long time others were still used as a gift to foreigners. The value of the medal, which is not a seemingly so great rarity, is such that the amount paid for it by collectors at British auctions now ranges from 40 to 50 thousand pounds sterling.

Since the creation of the commemorative coronation medal, that is, from the 1767 year, we can talk about the empress's serious infatuation with small plastic. Certainly, the first thing that comes to mind is the unique collection of glyptic, acquired by Catherine from the heirs of the Duke of Orleans and being the most precious pearl of our already rich Hermitage masterpieces.

Somewhat less well known is another large enterprise of the empress, in which only local forces are involved. By her decree, Medal Committees were formed in 1772, initially to create a “medal history from the time of the Emperor Peter the Great.” The idea was borrowed from the Academie des inscriptions, established under Louis XIV to invent medals for the events of his reign, but far surpassed the French in terms of historical retrospection and the quality of performance - Russian medals from that time began to be valued as works of art far beyond Russia. 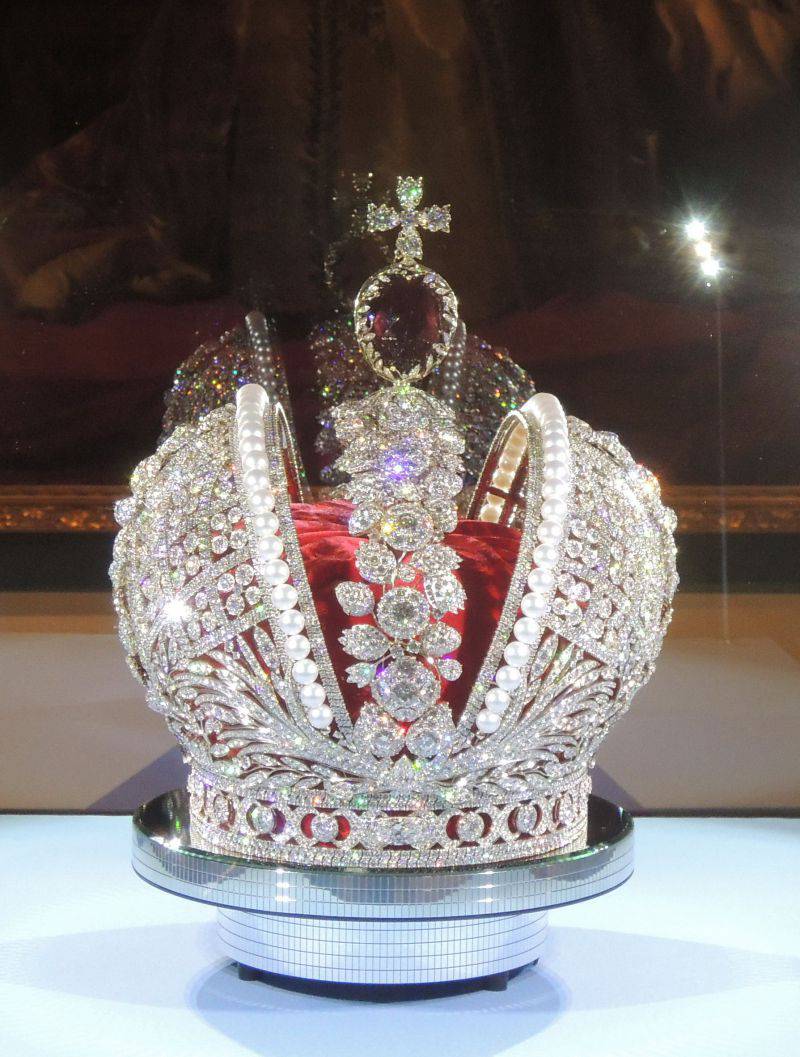 The Great Imperial Crown
The committees are a real public institution whose task was to prepare for the publication of an album with drawings of old and newly designed medals with historical commentaries to them, as well as chasing new products at the Mint. Leadership included Prince Mikhail Shcherbatov, mentioned above, a man of many-sided talent, Andrei Nartov, historian and translator, Mikhail Kheraskov, the largest Russian poet of his time (at least judging the literary scale by the huge volume of his poem Rossiad), Jacob Shtelin , an engraver and a medalist, as well as a fireworks specialist at that time, and some other remarkable faces.

The album containing 128 medal drawings (of which 82 of the original project) was prepared two years later, but it remained unpublished (the medals were not made either), since all the creative forces were eventually transferred to other historical series, including on the projects of the empress herself. 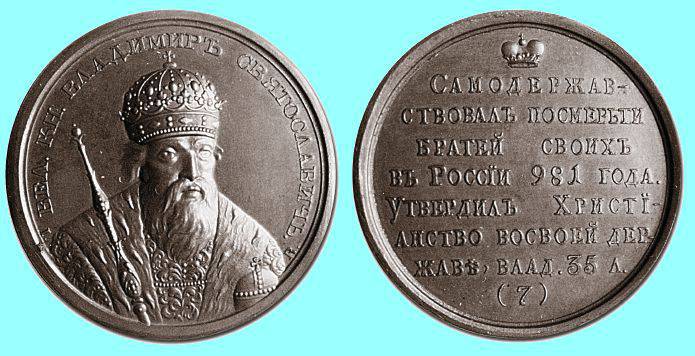 Medal "Vladimir Monomakh"
One of them, to work on which attracted all the best Russian carvers of the time, and among them the above-mentioned Yudin and Ivanov, was a miniature portrait gallery of Russian princes, starting with the legendary Gostomysl, and kings. The basis for it was the "Short Russian chronicler" by Mikhail Lomonosov and a series of portraits in jasper, carved by the Nuremberg master Johann Christoph Dorsch. Each medal has a typical design: on the obverse there is a portrait of a prince or a king, his name and title. The legend on the reverse - an indication from the “Chronicler” about how the grand ducal or royal throne is inherited, the main events of the government are immediately listed. Here is a common example - the medal "Vladimir Monomakh".

“IN GENERAL ALL REQUEST FOR VILLAGES IN THE GREAT. THE DECISION OF KIEV 1114 G. VENCHAN TSARAM AND SELF. (OBSERVER) ALL-RUSSIAN OWNER 11 YEARS. LIVED 72 OF THE YEAR.

These medal textbooks on Russian history, vividly demonstrating the Lomonosov’s official idea of ​​the benefits for Russia of autocratic rule, in which our great scientist saw a pledge of bliss and prosperity of the motherland, continued to go out during the reign of Catherine until her death in 1796 year. But even later, after the death of each of the monarchs up to Nicholas I, the series was supplemented with their nominal medals. It was completed by the production already in our days of the three missing medals - "Alexander II", "Alexander III" and "Nicholas II".
The St. Petersburg Mint managed to mint more and 94 medals dedicated to individual events of the times of Rurik, Oleg, Svyatoslav and Yaropolk (and, in general, written by Ekaterina, “Notes on Russian history” contain projects of two hundred and more medals). It was not without historical curiosities associated with the free interpretation of Russian history by Catherine.

Thus, on the reverse of the medal “To the victory of Svyatoslav and Olga in the edge of the Drevlyane”, not flaming Iskorosten, set on fire by the cunning and vengeful Olga with the help of innocent sparrows, as told to us by The Tale of Bygone Years, but, on the contrary, is given the picture is completely peaceful: the princess and her son quietly survey the fields and drevlyan dwellings beyond the river.

Summarizing the preliminary results, one can say that the Russian medal art of the Catherine epoch reached the European level and partly surpassed it. It is no coincidence that it is then that the first collectors of Russian medals appear, among them the outstanding sculptor Etienne Falcone, whose name itself is an indicator of a high artistic level.

Twice, in 1767 and 1790, the richest and most diverse collections of silver and bronze medals, now stored in the Bargello Museum in Florence, were sent from St. Petersburg to Vienna as a gift to the Austrian imperial house. And in the library of the University of Edinburgh, and still are 178 Russian medals, donated by the closest associate of Catherine II, Princess Ekaterina Dashkova.