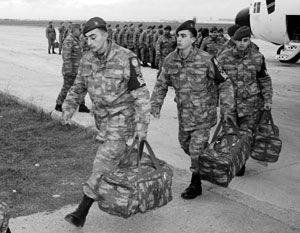 Azerbaijan has to drastically reduce its military budget by almost 40%. This is happening against the background of growing social tensions, protests that have to be tamed with the help of internal troops, and regular skirmishes on the confrontation line with Nagorno-Karabakh. How will the sequestration affect the republic’s army, the dream of a military revenge over Armenia?


The Ministry of Finance of Azerbaijan published information according to which total defense expenditure in 2016 decreased by 39,7%. The main expenses even formally increased by 3,3% (in the budget execution forecast by as much as 4,4%), but so-called suffered. “Special projects and activities”. Since 2011, this budget line has been an integral part of the total defense expenditures of Azerbaijan and has always fluctuated around 40% of the total military budget. Now it's just not there.

“The enemy suffered significant losses during the year. The enemy is in a panic, he retreats, looking for a place to hide. Our soldiers are confronted with the only combat mission - to chase the enemy everywhere. ”

The military expenditures of the republic have steadily increased in recent years, both in absolute figures and as a percentage of GDP. 2011 was the peak year when, against the background of a favorable energy situation, Baku spent 6,2% of GDP on the army and “special projects”. At the same time, the army itself was constantly reformed and modernized. Baku sought to create a more effective system of ground forces than the one that was inherited from the Karabakh war. For this purpose, ground forces were reduced to 66 950 people (from 85 thousands to 2005), divided into 5 army corps (one in Nakhichevan) of different staff and the National Guard as an independent reserve unit. At the same time, purchases of modern weapons began, mainly from Russia, although part of the armored vehicles was obtained from Slovakia, Ukraine and Belarus.
The Azerbaijani Air Force modernized less actively than the ground forces, and the Russian Federation practically did not participate in this. Modern park aviation It consists mainly of aircraft purchased in Ukraine at a time when Kiev sold everything that lay bad (16 MiG-29 and 12 Mi-24 helicopters), in Kazakhstan (8 MiG-25), Belarus (6 Su-25 ) and Georgia (13 Su-25). Finally, starting in 2010, an independent production of Su-25 from Georgian components began at the assembly plant in Sumgait.

Most likely, the reduction of budget financing will affect precisely arms purchases and plans for a gradual transition to its own production facilities in the military-industrial complex. In particular, it may “hang up” an ambitious contract with Israel for the supply of two divisions (8 installations) of the Iron Dome PTL system, signed back in 2013 year. Over the past five years, Israel has become the largest military-industrial partner of Azerbaijan. It was with Israeli firms that agreements were reached on the construction of modern military-industrial complex plants in the republic and the production of military equipment. I earned while one, producing drones according to the Israeli license. But negotiations on the production of a new BTR "Namer" are also likely to be postponed until better times.

On its own, Azerbaijan is now able to produce a 107-mm caliber RZSO and missiles for them, battalion mortars (jointly with South Africa), a local analogue of the Kalashnikov assault rifle (Izhmash supplies components), the Istiglal sniper rifle, suspiciously similar to Turkish, lightly armored vehicles and a trifle - silencers, anti-mine devices, night sights, artillery shells. There were reports that Azerbaijan was invited by Turkey to participate in work on a tank Altai But the new Turkish tank has already been demonstrated, and Azerbaijan was not there. It was also planned to begin (with the help of the same Israel and Turkey) the modernization of the old T-55 tanks taken out of service in order to turn them into a variety of tracked vehicles (Israel is a great specialist in such alteration of captured equipment). But all this in the coming year, apparently, will not grow together.
The only training and rearmament program that will not be sequestered is cooperation with NATO. First, NATO itself pays, and, secondly, the scope of this program is surprisingly small. For example, the contingent of Azerbaijani soldiers, sent before the New Year in Afghanistan, amounted to the entire 42 man. Another thing is the training of military and students in foreign educational institutions. At the same time, Russian, Ukrainian, and Georgian were excluded from the list of universities whose education provides a deferment from military service or a military department.

The constant decline in oil production against the backdrop of a global fall in energy prices has seriously undermined the economic opportunities of Azerbaijan as a whole, and not only in the military sphere. In the last month, against the background of the crisis, unrest began in the frontal zone and among the Talysh, a national minority living in the south of the republic. Some localities even had to send in internal troops and use tear gas and batons against local residents.

In parallel, rumors of future cuts and layoffs began to spread among officers and soldiers of the Armed Forces. For example, it was reported that in 2016, military salaries would be reduced. The Ministry of Defense had to officially deny these rumors and argue that the opposite is true: the monetary allowance has even been increased since the beginning of the year. This was achieved due to “changes made to the staff structure of the central office and headquarters”. “Optimization has been achieved (as in the text - approx. LOOK), due to which the salaries of servicemen increased, the social security base for the personnel and their families was strengthened.” In common people, “changes in the staff structure” and “optimization”, due to which salaries have increased, are usually referred to as staff reductions, in which part of the salaries reduced are distributed among the rest.

As for the strategic plans, the Minister of Defense Zakir Hasanov, speaking on 29 last December to the graduates of the Training Center of the Armed Forces of Azerbaijan, called the “liberation of the occupied territories” a “key task”. For this, the army, according to him, today has all the means, including the most modern weapon. “The initiative at the front is on our side. As a result of the combat readiness, the strength of the weapon, the exact strike of the Azerbaijani soldier, the enemy suffered significant losses during the year. The enemy is in a panic, he retreats, looking for a place to hide. Our soldiers are confronted with the only combat mission - to chase the enemy everywhere, find him and destroy him. Real military power of Azerbaijan allows it, ”he said.

At the same time, even official reports weekly report losses on the contact line. Only this January, the Azerbaijani army put into operation three new military units in the front-line zone, and it looks like no reduction in military spending is affecting this. Both sides regularly refute each other, underestimate their losses and inflate others, but on the whole, the situation on the Karabakh front remains clinically dangerous. For example, over the New Year week, Azerbaijani propagandists counted 15 killed Armenian soldiers and only two Azerbaijani. A "Armenian drone" was shot down with about a squadron.

Baku’s military spending should be estimated not simply in numbers or percentages of GDP. This would be an ordinary political calculation, which is applicable, for example, to European countries with their budgeted parameters for military spending. In Azerbaijan, all such calculations should be compared with similar figures in Armenia, since the armed forces of Azerbaijan are a one-way structure. For many years they have been formed exclusively for revenge, their deployment, armament, training and, in the end, financial content are sharpened only for the confrontation with Armenia. They have no other tasks, including social ones, and therefore there is no point in applying customary, understandable and transparent views to assessing financial security.

It is also important to emphasize that the military budget of Azerbaijan has always been extremely opaque, which constantly gave reason for Western observers to indicate its high corruption. Military expenditures in the republic, which staked on the modernization of the remaining Soviet capacities, are often used as a political tool, which really increases its corruption at all levels.
In any case, even the official figures of Baku’s sequestered military budget are 10 times higher than all the military expenses of Armenia. Approximately this ratio in all quantitative indicators of the armed forces. The current reduction in military spending will not entail radical changes in strategic indicators, it can only slow down for a couple of years the pace of modernization of the armed forces. Armenia is on the path of tactical rearmament on the basis of the Russian systems (by the way, also producing its own Krunk drones, translated as “Crane”) and by increasing the professionalism of the officer corps.

As a result, the only direct consequence of the reduction of Baku’s military spending directly on the front line will be the chronic shortage of armored vehicles - the main military factor that has been restraining revanchist sentiments in the Azerbaijani armed forces all these years.

Ctrl Enter
Noticed oshЫbku Highlight text and press. Ctrl + Enter
We are
How can Russia survive and win in the 21st century?Errors of Armenia and the success of Azerbaijan ("Journal of Turkish Weekly" Turkey)
50 comments
Information
Dear reader, to leave comments on the publication, you must to register.