Erdogan. Is it possible to "calculate" a cat who imagines himself a lion?

February 2 2016
132
Today, only lazy people do not discuss the aggravation of Russian-Turkish relations. Military experts, analysts, political scientists. And indeed, the topic worries everyone. And the reason is clear. Russia and a member of NATO. Russia and Europe. Will politicians be able to avoid a real war, can common sense win over ambitions? 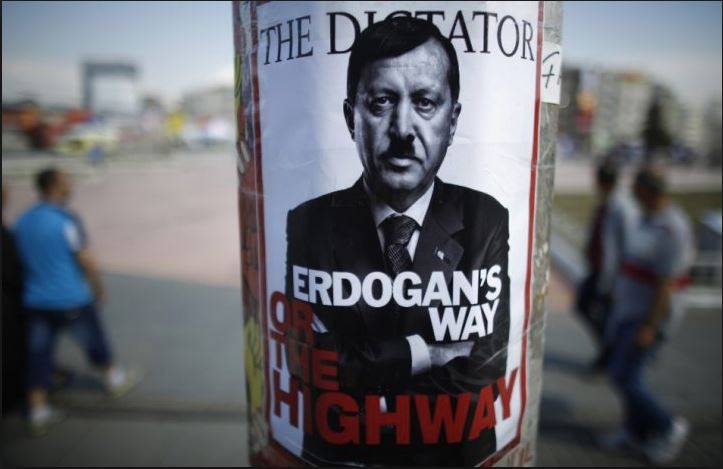 I will not describe the background to the conflict; practically anyone who is interested in international affairs is up to date. But it is necessary to mention the deep essence. And the essence is simple. Erdogan almost from the very beginning of his presidency, the main goal of his activity was the re-establishment of the great Turkish empire. Turkey, in his understanding, should become the leading state in the region. A state that dictates to the rest not only politics, but also a way of thinking.

In principle, nothing new. Full copyright of what the US is doing today. And who is the last for Turkey, it also makes no sense to deploy.

The Eastern mentality helped the Turkish president bypass sharp corners in relations with neighbors. Turks got along well with the EU and Russia. The country increased economically. Ros and international authority of Erdogan.

The plan was carried out exactly until the moment when Russia decided to really help the Syrian people in the fight against the DAISH gangsters. No, Russian diplomacy worked. And she worked with dignity. Language will not turn blame the department Lavrov in poor performance.

The actions of the Russian Aerospace Forces completely contradicted Erdogan’s goals. Today, there is no reason to even dream of a violent overthrow of the Syrian president and a coup d'état. The cries of "Assad must go" to put it mildly, quieted to a whisper. Moreover, in the Arab world, the authority of Assad is growing. And the growth of the prestige of the president automatically enhances the prestige of the country.

The same can be said about the situation with Iran. Perennial mockery of the Iranian people and the state ends. Ends because Iran has learned to live in a blockade.

For Turkey, this means a return to the "total stall". Leadership with such powerful neighbors can be forgotten. Let the term “powerful state” be applicable to Syria only in the future, but for some reason there is certainty about the Syrian future. Syria and Iran perfectly remember the treachery of the Turks. East is a dark matter. But not for oriental people.

An attempt to start a conflict between Russia and NATO did not bring dividends to Erdogan either. Western partners in the bloc, to put it mildly, sent the Turks to solve their problems on their own. And Russia has dealt a serious economic blow to the entire economy of Turkey. The power of Russia is subject to much less shock than the Turkish economy. Yes, and neighbors gladly occupy vacant seats in the Russian market.

But the main thing was that the decline in the economy led to increased discontent with Erdogan himself. Moreover, this dissatisfaction was very quickly used by nationalist forces inside Turkey itself. The Kurdish partisans took heart. In some of the Black Sea provinces, they talked about the autonomy of other nations. The "crackling" inside the state is already clearly felt by all. The country is bursting at the seams. Let it is not yet explicit, but information about this appears in open sources.

Erdogan now resembles a cat, which the dogs have cornered. No exit. And the main thought in the cat head is no longer about freedom. There, the thought of how to live on. Attack angry dogs and die heroically from fangs? Or maybe admit defeat and hope for the mercy of the winners? Then at least ghostly hope is preserved.

These are the thoughts that should be analyzed in more detail.

Attack and ... win. In principle, Erdogan does not set himself such a task. He understands that the forces are not equal. Even with the backstage support of his policies by some NATO countries, the majority will not fit into the conflict with Russia. And the majority is just the strongest and really capable of somehow resisting the Russian army. But fools in Europe every day less and less.

So, you need to put Russia in a position in which any of its actions would play into the hands of the Turks. First of all, it is necessary to isolate Russia's possible allies from the talks on Syria. And who is the most likely ally? First of all, the Kurds.

This is what we see today at the Geneva talks. Kurds withdrawn from these negotiations at the insistence of Turkey. Withdrawn, although any sensible politician understands that to solve the problem without the Kurds will not work. Without solving the Kurdish problem to solve the Syrian impossible. Then what is the point in all Geneva demarches and loud statements, if the script is familiar to us again? This, forgive, is another Minsk.

What will the next step be? It is from Erdogan?

Somehow, experts did not particularly notice the announcement of the "orange" level for the Air Force. And in vain. The fact is that this level simply did not exist in Turkey before this incident. A completely new reality for the Turkish Air Force. And it means that now for the start of hostilities, the solution of a particular pilot is sufficient. The pilot decides that he is in danger - he will start shooting. Not a president or prime minister, but a simple pilot.

And the majority of the land forces are trying to ignore the concentration of ground troops in the border areas. The country has the right to move in its territory as it pleases.

The weak link of the Syrian border is precisely those 98 km with Turkey. It is there that the operation to humiliate Russia will be carried out. Possible scenario looks like this.

Turkish regular troops enter the territory of Syria. They occupy the border area and quickly create camps for refugees. This is a matter of one day. Especially when you consider that the border is controlled by ISIS for the time being.

And in what position is Russia? Bomb? It is impossible. "Peaceful refugees" Turkomans are becoming a human shield for the Turkish army. Do not bomb? Then you have to give a damn about arrangements with Assad. Or introduce land units to conduct ground operations. That is, in any case, Russia is violating the promises made previously by the president.

The implementation of such a plan will allow Erdogan to strengthen his position. There is, however, one nuance. The opportunity to get on the nose still remains. Get even the forces that today Russia has in Syria. The lightning speed of such a strike was demonstrated by the operation to rescue the pilots of a wounded bomber.

And in order to rule out this possibility, the Turks urgently need to restore personal contacts between the presidents or, at least, between the foreign ministers. Guilty pilot will be punished, if that. And the head of state will prevent a global war.

The second option of action "driven cat", as we remember, is the option of captivity and favors from dogs. Consider it.

What do we see today in Syria? And we see two interesting points. The first is the success of the Russian Aerospace Forces and the Syrian army. And the second - the forced inclusion of the United States and the coalition in the fight against LIH. Americans can not today be engaged in the war, which was engaged before. We need real success. Real blows.

Moreover, the USA more and more realize that it is no longer possible to solve the Syrian problems without Russia. That is why we see frequent meetings of Lavrov and Kerry. Everyone understands everything, but for some reason they are embarrassed to call things by their names. And these meetings are nothing but spitting primarily in the Turks.

The United States and Russia today speak without intermediaries. More precisely, without ballast. And the results of these conversations are brought to the attention of the parties. Including Turkey. Thus, we see who is who on the political map of the world. Who decides, and who is sitting next to with a smart look.

In the end, ISIS in any case will be extruded from the territory of Syria. Where - the second question. The main thing - Syria will be liberated. And Turkey?

Turkey in this case for quite a long time will completely fall out of the political process in the region. What can you negotiate with this country? There are stronger, more authoritative, richer. Not only with ambitions, but also with oil and gas.

But this is not as important as the billions promised by the Turks from the EU. Billions of refugees. And so they may not come. And the president of Turkey will receive increased unrest in the country. And the threat of a coup. Real threat.

Even the search for contacts with Putin fits into the scheme almost perfectly. There will be contacts - there is an opportunity to somehow participate in the “liberation” of Syria. Together with the Russians.

So, what conclusion can be made in the situation created by Erdogan?

Turkey today is cornered. Attempts to scare Russia NATO failed. Erdogan lost the remnants of political weight in regional affairs. Inside Turkey ripen forces capable of breaking the country. Nationalists raise their heads. ISIL militants today pose a real danger to the stability of the country. And the president cannot drive them out of his territory. Too stuck in the oil trade.

Syria is practically isolated from Turkish politicians and diplomats. Iran is building up muscles. Americans and Europeans are accusing Erdogan of louder and louder support for the militants. Relations with Russia are extremely strained.

It is impossible to predict the future course of events on 100%. "Cat" in the corner. What he chooses, no one knows. Even the cat itself. Our task is to think over his next steps and be ready for active counteraction.

Ctrl Enter
Noticed oshЫbku Highlight text and press. Ctrl + Enter
We are
Turkey and Greece. Cold War airspaceThe attack on the Russian aircraft and the political situation in Turkey
132 comments
Information
Dear reader, to leave comments on the publication, you must to register.