So here you are, "moderate Syrian opposition" ...

February 2 2016
55
The more time passes since the start of the antiterrorist operation of the Russian Aerospace Forces in Syria, the more the names of the representatives of the so-called Syrian “moderate opposition” float to the surface. Not so long ago, neither in the USA nor in Syria itself could they have called a single name of a “moderate oppositionist,” but now the situation has radically changed. The label “moderate” strives to fasten all those who try not only to protect themselves from the retaliation of the Syrian army and the Russian VKS, who support this army, but also to try their luck in terms of possible entry into high positions in Syria.


I remember how quite recently a certain Riad Hijab, who stated that he was the head of the Coordination Council of the Syrian opposition, criticized US President Barack Obama for the fact that he “succumbed to the pressure of Russia and removed from the agenda the demand for the resignation of al-Assad.” Then another riad appeared, but now Naasan Aga, who identified himself as an official member of a certain representative office of the Coordination Council on international contacts. And this Aga himself announced “demands” to official Damascus, the fulfillment of which would lead to the fact that the “moderates” with the representatives of the Syrian authorities in Geneva would deign to sit at the negotiating table. The new day is a new “representative” of the moderate Syrian opposition ...

This time, a certain Salem al-Maslat voiced. And Mr. Maslat, barely appearing in the lenses of the media, decided to outdo both the Hijab and Naasan Aga.

This very Maslat, posing as the official representative, as much as the highest negotiating committee (how many of these committees do they have? ..), announced a kind of ultimatum regarding the Russian Federation. According to al-Maslat, for now, you see, he does not believe that Russia in Syria is fighting against terrorism. And, you understand, Russia must by all means prove to the representative of the “highest council of the most extreme opposition” that the Russian Aerospace Forces are bombing exactly the “right” (from the point of view of Maslat) objects.

Information Agency TASS quotes the representative of the opposition committee:
If we see that Russia is seriously fighting terrorism, then we will fight terrorism with it in Syria. We will fight together with the IG. The Russian people are a close friend of the Syrian people. And we want it to remain so. We want to have a strong relationship with the Russian people. The government (of Russia) must stop the attacks on the Syrians. We have come a long way not to sit and waste time. We want this process to be a success. 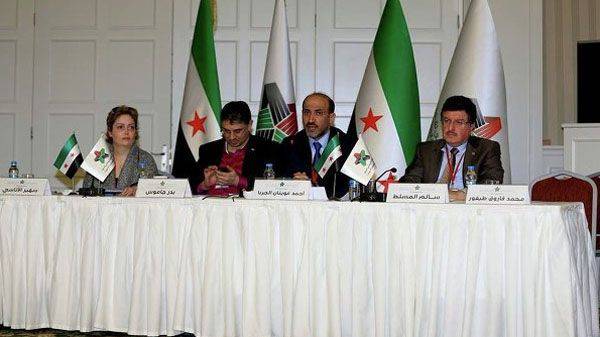 This was followed by a verbose "blah blah show", which completely does not make practical sense, because the entire message of al-Maslat fits in fact with one requirement for Russia: nizzhzya bomb - we will also fight with the IG.

As they say in the elite casino "What? Where? When? ”: Attention! - The question! And what prevented Mr. Al-Maslat together with his comrades earlier in the fight against ISIS terrorists - before the Russian bombers got down to business with all the anti-terrorism thoroughness? In what er-Riyadov or Washington desk was this “friend of the Russian people” sitting, and why did he not give ultimatums to the same “Islamic state”? ..

Once Russian aviation bombs and cruise missiles allowed the Syrian government army to take their strategic initiative into their own hands and effectively reduce to zero all the costs that the main sponsors of Syrian chaos invested in “maslats” and other “hijabs”, and a “moderate opposition” squeaked. Obviously, the voice erupted on the team of the same name ...

It was noteworthy that the Salem al-Maslat, which was repeatedly mentioned in the article after the “ultimatum” of Russia, repeatedly presented surprising information. According to him, one of the leaders of the group "Jaish al-Islam" will head the delegation of the Syrian "moderate opposition" (attention!). We are talking about a man named Mohammed Allush. If suddenly someone forgot or simply did not have time to get acquainted with the activities of “Jaish al-Islam”, then a short background.

"Jaish al-Islam" - a group that for several years holds positions in one of the suburbs of Damascus - Guta. It was from here at the time the quarters of the Syrian capital were fired from mortars and from launchers of unguided missiles. As a result of one of these attacks, several people died during a rally in support of the Russian counter-terrorist operation in Syria. One of the missiles fell on the territory of the Russian embassy in Damascus.

In 2012, the militants of the group, recognized by the Russian court as a terrorist, carried out an explosive blast. As a result of the attack, Syrian Defense Minister Daoud Rajih and his first deputy Asef Shaukat were killed. The explosion affected several civilians.
Jaish al-Islam did not join the so-called Syrian Free Army at the time, saying that it was going to form an "Islamic front of resistance." The “Jash al-Islam” militants “resisted” at the expense of the Saudi monarchy, as the British press reported at the time.

As soon as Syrian government troops began to crowd militants in the province of Damascus with the support of the Russian Aerospace Forces, Jaish al-Islam declared that they were “against terrorism”, condemned the Paris attacks and called themselves “irreconcilable fighters against ISIL”. Oh how! ..

At the end of December 2015, Islamist leader Zahran Alloush and a group of his closest accomplices were liquidated around Damascus. Now Riyadh pushes a relative of another Allush into the delegation of “oppositionists”, apparently, so that the money will not disappear ...

In Russia, they listened for a long time to the demands of Mr. Al-Maslat about the need to “stop the bombing of Syria,” and then diplomatically asked: “Is it something? ..”

And at this time, the next flight was made by Russian VKS airplanes from the air base in Latakia, placing bombs evenly on the terrorist groups in Syria and in parallel on the ultimatums of talking heads represented by Maslat and others like him.

Ctrl Enter
Noticed oshЫbku Highlight text and press. Ctrl + Enter
We are
ARMY-2016. Cluster VCS. Part of 2. Space is space!Syria: Americans scare themselves, and Asma Asad buys chairs
55 comments
Information
Dear reader, to leave comments on the publication, you must to register.