The dollar barrier between Russia and Belarus, or What to lubricate the skis of the union state?

February 2 2016
130
The other day an informal meeting of the Prime Minister of Russia Dmitry Medvedev with the President of the Republic of Belarus Alexander Lukashenko was held in Sochi. Despite the fact that more often the policies of the union state appeared in front of cameras and camera lenses on the ski slopes of Krasnaya Polyana, in fact, the meeting cannot be called frankly "tusovochnaya." During the conversation, Alexander Lukashenko and Dmitry Medvedev discussed issues related to the difficulties of an economic nature faced by both Russia and Belarus. 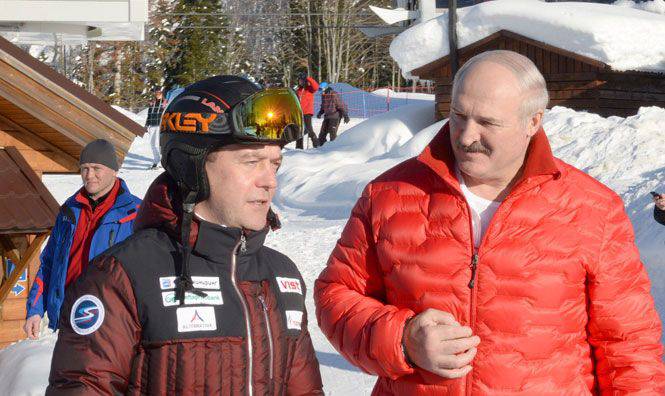 And this Sochi discussion was a kind of continuation of the Russian-Belarusian contacts, which were already held by the heads of government - Dmitry Medvedev and his Belarusian counterpart Andrei Kobyakov (in St. Petersburg).

All these contacts are intended to shape the agenda, which will be discussed in the format of the Supreme State Council of the Union State of Russia and Belarus. The plans of Moscow and Minsk include the holding of a meeting of the Supreme State Council (VGS SG) in Minsk in the last decade of February.
What issues can now be called one of the priority ones - for discussion in the framework of the GHS SG? For obvious reasons, the economy occupies a leading position. One of the issues for discussion is the dynamics of trade turnover between the constituent parts of the Union State, in addition to being members of the Eurasian Economic Union.

Frankly speaking, it is somewhat strange against the background of constant statements by politicians of the highest level about the need to abandon mutual settlements in dollars, to hear statements by representatives of the same top leadership of both Russia and Belarus about “reducing trade turnover” in dollar terms. The Chairman of the Belarusian Council of Ministers who visited St. Petersburg said that with Peter alone, the trade turnover of Belarus fell by half a billion dollars: from $ 2 billion in 2014 to $ 1,5 billion in 2015.

Andrei Kobyakov:
We have to get to the indicators that were in 2014 year, for us to become mundane and surpassed.

The question arises: to go to exactly what indicators? Indeed, in 2014, the Russian and Belarusian national currencies against the US were significantly stronger than in 2015. And if you measure the level of trade in a currency that, at least, geographically has nothing to do with the two countries, the statistics of trade will indeed look depressing. But after all, the Russian and Belarusian companies, I hope, pay off with each other not gray-green American candy wrappers when selling manufactured products ...

If, however, we measure commodity turnover in rubles (albeit in Russian), then in 2015, its indicators showed growth in a number of industries. And this is a much more objective figure, unlike the dollar equivalent, which in the trade relations of the Russian Federation and the Republic of Belarus looks completely inappropriate.

However, returning to the phrase “I would like to hope” (about mutual settlements in national currencies), it turns out that everything is not so simple. If you believe the Minister of Economic Development of the Russian Federation, Mr. Ulyukayev, the "dollarization of trade is great." In September last year, Ulyukaev declared (quote Interfax):

If we measure the volume of trade not in US dollars, but take physical volumes, we will see that trade has not fallen. In physical terms, it is the same as a year ago. And if we measure it in national currencies, we will even see growth. This once again shows that the high degree of dollarization of our trade, and it is now less than it was before, but still is still quite large, and our investment and trade relations are highly dependent on the exchange rate ratios that are outside our jurisdictions and bring more negative in the turnover. Of course, it is necessary to develop relations formed in national currencies.

It turns out that the hopes for payment by national currencies of the ordered products by the majority of Russian and Belarusian companies turned out to be unjustified ... From the words of the same Ulyukayev, it becomes clear that with all the loud statements about the need for import substitution (by the way, Medvedev and Kobyakov again spoke about import substitution) Petersburg, the same Medvedev with Lukashenko in Sochi), the main thing is not happening - the refusal to pay for contracts in foreign currency (US dollars). For two countries, each of which is to some extent under American sanctions, it is strange to continue to use the American currency to service the goods turnover, to put it mildly ...

By the way, it is worth recalling how the process began. As soon as the Russian ruble in 2014 came out of the so-called currency corridor and the decision of the Central Bank became a currency with a floating exchange rate, this same rate rushed down (in relation to the main currencies of world trade - the dollar and the euro). For obvious reasons, this tendency of the Russian ruble influenced the economy of Belarus. The level of republican revenues from trade with the Russian Federation began to fall along with the depreciation of the Russian national currency. At this moment, the President of Belarus Alexander Lukashenko started up. He appealed to the Council of Ministers of the Republic of Belarus with the requirement to make the transition to mutual settlements with Russia in US dollars or euros. The Belarusian leader considered the argument that the Republic of Belarus is paying the Russian Federation for energy resources in dollars. At the same time, the leader of the Republic of Belarus, apparently, was not particularly embarrassed by the fact that energy resources from Russia to Belarus were actually sold at Russian prices.

Alexander Lukashenko (December 2014):
The task was to trade not for rubles, but for dollars, since we pay for energy resources not in rubles, but in dollars. This, by the way, is a lack of government work. It was necessary to work with Russia for a long time and require from them so that they pay us in hard currency - in dollars or euros.
The Council of Ministers took the visor, and the role of the dollar in the commodity-money relations of the two countries grew substantially. Washington only had to applaud from such decisions of the "Eastern partners" ... It’s still applauding that the share of the US dollar does not intend to decline at an active pace in the trade interaction of the Russian Federation and the Republic of Belarus. How much on a double exchange alone our countries spend in the process of such trade - we can only guess ... Is it profitable for Russian companies? Not. Is it beneficial for Belarusian companies? Also no. Washington is again shaken by stormy, unceasing applause ...

I would like to hope that at the negotiating table in Minsk in the format of the Supreme State Council of the Union State, the representatives of Russia and Belarus will still find the formula that will allow them not to serve the American economy, but work to improve their own economy and to reduce the degree of mutual complaints and grievances that are far not only from economic pragmatics, but also from the very principle of the two countries in a real Union State.

Ctrl Enter
Noticed oshЫbku Highlight text and press. Ctrl + Enter
We are
Union of Russia and Belarus - to be. The Day of Unity of Russia and BelarusHoney and tar Dmitry Medvedev
130 comments
Information
Dear reader, to leave comments on the publication, you must to register.