February 1 2016
107
The press service of the shipbuilding enterprise “Yantar” (Kaliningrad region) distributed a message about the start of state tests of the second “Admiral Essen” patrol (project 11356). The decision on the beginning of the state tests was made by the chairman of the state commission for the acceptance of a warship built at the plant. 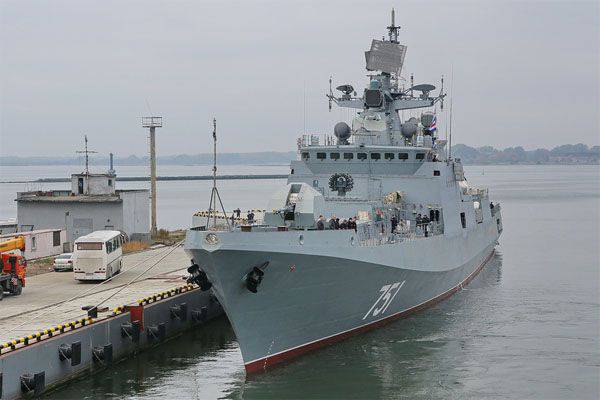 From the message press service Baltic Shipyard "Yantar":
At present, the commissioning team of the plant and the crew of the ship are preparing for the first launch at sea this week. State tests will last about a month, they will be held at the Baltic landfills fleet. The transfer of the patrol ship of the Russian Navy is scheduled for April 2016.

The Admiral Essen TFR was laid on the Yantar PSNZ 8 on July 2011 of the year, launched on the 7 in November on 2014 of the year, factory running tests began on 28 in October of 2015. Under two contracts signed with the Ministry of Defense of the Russian Federation, the Yantar plant builds a series of the six patrol ships of 11356 Ave., developed by JSC Severnoye Design Bureau.

Ctrl Enter
Noticed oshЫbku Highlight text and press. Ctrl + Enter
We are
The action “Military service under the contract is your choice!” In Rostov-on-Don: future contract servicemen, exhibitions and “Russian Knights”At PSZ "Yantar in October, the fourth frigate for the Black Sea Fleet will be laid
Military Reviewin Yandex News
Military Reviewin Google News
107 comments
Information
Dear reader, to leave comments on the publication, you must sign in.