The main sponsor of DAISH is seeking help in Moscow 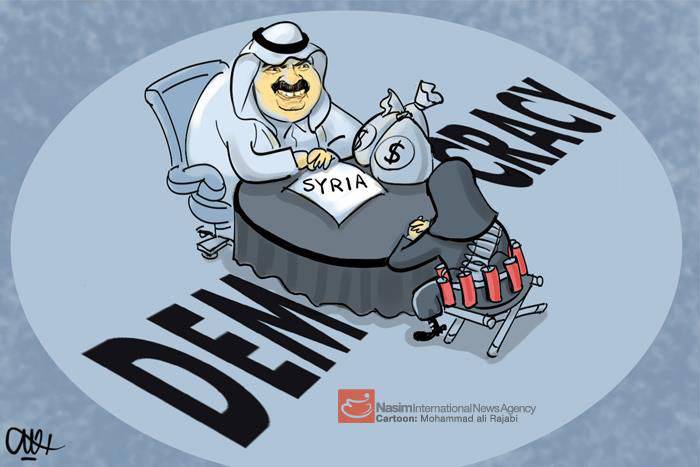 The Russian expert-analytical community does not cease to amaze with its ridiculous friendliness towards our most non-hands-on "partners." So, last week Qatari emir Tamim bin Hamad Al-Thani visited Moscow.

Following the meeting of the Qatari emir with Vladimir Putin, several formal and meaningless statements were made that allowed some Russian political analysts to characterize the past negotiations as “exceptionally successful”. They say there has been a warming in Russian-Qatari relations and the prospects for cooperation between Moscow and Doha instill "healthy optimism."

Such assessments are genuinely surprising, since Russia and Qatar today have only two points of contact: the global gas market and the problem of global terrorism. In both cases, Moscow and Doha act as each other’s natural antagonists.

Speaking about the prospects of economic cooperation, it should be noted that it is a priori unpromising. First, the trade turnover between the two countries is a modest 50 million dollars. For comparison, Qatar and India the year before last traded at 6,5 billion dollars. Secondly, they simply do not wait for us there: any attempts by Russian companies to enter the Qatari market are immediately blocked by Doha, as Eldar Kasayev has repeatedly written about.

But the fact that Doha is one of the main sponsors of modern international terrorism is the main obstacle to the development of partnership between Russia and Qatar. We have repeatedly noted that the “Islamic State” is a man-made project of Qatar, and not of the United States or Saudi Arabia, which domestic political scientists constantly ring out.

Qatar, in contrast to the United States, Saudi Arabia and Turkey, has in its assets quite competent military-political leadership, which, indeed, understands something in strategic planning and Middle Eastern realities. That is what enabled Doha in 2012 to catch three major trends in the Syrian crisis.

The first is the rapid radicalization of the Syrian opposition, which was simply clicked on in Washington. The second is the presence of intractable contradictions in Iraq with a tendency to the final split of the country into three parts: Sunni, Shiite and Kurdish. The third is the futility of betting on the Muslim Brotherhood, which by that time was the main foreign policy instrument of Doha. Realizing that the Egyptian scenario was impossible in Syria, Qatar stepped up on the traditional Saudi platform, that is, began to buy Salafi factions in batches, which by that time already constituted the overwhelming part of the armed opposition.

Understanding the three trends listed pushed the Qatari leadership to take decisive action. So, the veterans of the Libyan war and the Kistinian Chechens were transferred to Syria, who provided the future DAISH with the raw material base in the east of Syria. Remarkably, initially ISIS avoided clashes with the Syrian army and was mainly busy squeezing Saudi and Turkish groups from areas with oil spawning and an extensive communications system. In parallel with this, Qatar bought up entire clans and tribes in the Sunni provinces of Iraq, which were previously loyal to Saudi Arabia. Each of the tribes had at their disposal combat-trained brigades prepared by the Americans (the former Al-Sahwa). As a result, both Qatari branches simply merged, with the result that the Caliphate was proclaimed.

And if earlier the fact of the active participation of Qatar in the Syrian crisis could be ignored, based on the fact that this is the notorious “hybrid war” and each player has his own methods and tools, then after the appearance of the Russian military in Syria, the distance between Doha and Moscow was significantly reduced . Since 30 last September, any “unfriendly” action of “caliphates” against Russian interests in Syria began to be regarded as aggression against Moscow, and not Damascus.

Understanding that the Russian military operation in Syria has very specific goals and objectives, and, despite the "Arabian" propaganda, has nothing to do with the militarist PR action, came to the Qatari military-political leadership around November-December last year. It was at the designated time interval that the tonality of the statements of Doha’s official representatives changed significantly. 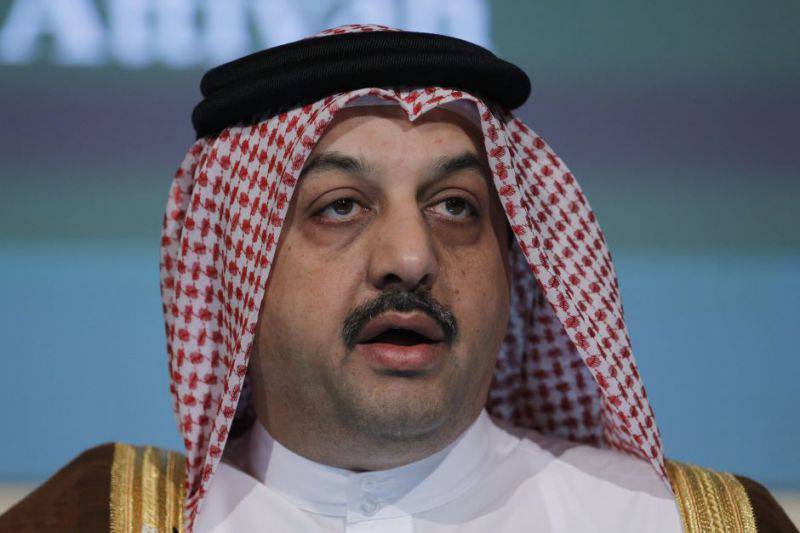 Qatar Foreign Minister - Khaled bin Mohammed Al-Attiyah, September 2015:
“No one can refuse the call of Putin to unite in the fight against terrorism, but we need to solve the main reason. We are confident that the Syrian regime, namely Bashar Asad, is the real reason. ”

Qatar Foreign Minister - Khaled bin Mohammed Al-Attiyah, December 2015:
“We have a common approach with the Russian side on many issues and one of the main ones is the commitment to the territorial integrity of Syria and support of the will of the Syrian people. We realize that the delay in resolving this crisis is harmful to all parties and, above all, to the Syrian people. ”

Qatar Foreign Minister - Khaled bin Mohammed Al-Attiyah, January 2016:
“We are convinced that it is Russia thanks to its historical relations with Arab countries can find a way to resolve the Syrian crisis. We have no doubt that Russia stands for a united, Arab, secular Syria. We agree with these principles. ”

“The leaders of the two countries agreed on the need to find a political solution in Syria. Therefore, the leaders agreed to intensify efforts to put an end to hostilities, killings and hunger among the civilian population. It was also agreed to ensure that the Syrian people could exercise their will, and this requires the support of Arab countries, as well as international players. ”
It is noteworthy that the tonality of the Qatari "gray cardinal" has a direct dependence on News from the front line, where the Syrian army is supported by the Russian aviation continued to move forward. And if in October-November a ballad was heard from every “flood” iron about “Assad’s marching in place”, then in December-January it was already impossible to hide the successes of official Damascus.

The most insightful military and political observers back in October suggested that the intervention of the Russian armed forces in the Syrian conflict would not only save official Damascus from inevitable defeat, but also contribute to the elimination of all terrorist groups in Syria. The international expert-analytical community did not share such assessments and called either the inevitable fall of Damascus or the preservation of the power of Bashar al-Assad in the Mediterranean coastal area - the so-called “Alavistan”.

However, in November-December, it became obvious that the Syrian army would continue to increase the pace of the offensive, and the level of combat capability of government forces will increase every month. As the experience of military conflict in the south-east of Ukraine has shown, the process of forming a modern army with the support of "polite instructors" takes from 6 to 9 months. In the case of Syria, the process of retraining and forming a new army can take from 12 to 16 months. The first results of the "northern rebranding" can be observed today. 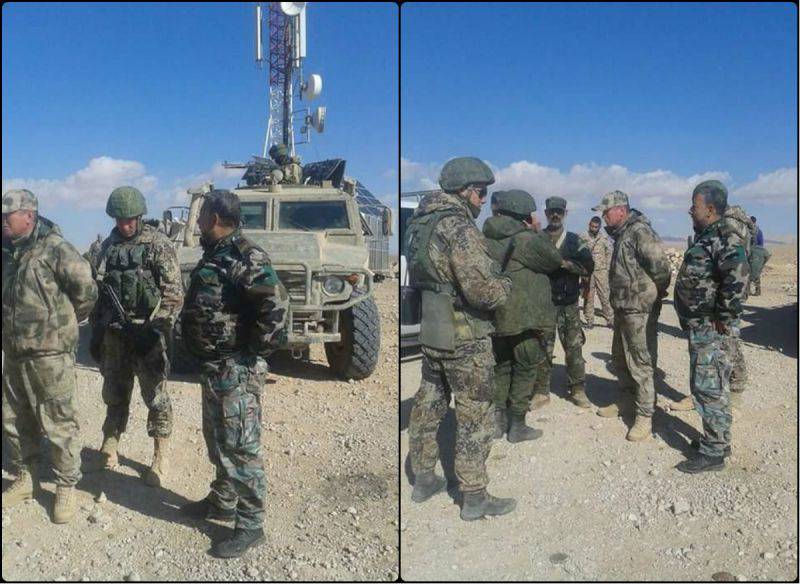 "Polite Advisors" in the Palmyra area

In many ways, it was precisely the successes of the Syrian army’s offensive operations, with the active support of Russian aviation, that provoked the “international community” to take more decisive measures in the fight against the ISISH. Thus, the United States increased the number of its contingent in Iraq, sent a new batch of military advisers to Erbil, and advertised a joint offensive with the Syrian Kurds. The French began to deliver air strikes on the infrastructure of the "caliphate". The Germans sent their military contingent to Iraq and began to carry out reconnaissance flights in Syria. The remaining members of NATO also indicated their presence. The future of the Qatari project DAISH was predetermined.

However, the Qatari emir went on a visit not to Washington or Berlin, but followed in the footsteps of the head of his Ministry of Foreign Affairs, who had already visited Moscow in December. Apparently, according to the Qatari military-political leadership, the work of the American coalition does not represent a significant threat to the latter-day Caliphate.

Statements by the Russian president and the Qatari emir at the official press conference are unlikely to have anything to do with the conversation behind the closed doors. Coordination of efforts in the global gas market and the arena of the fight against international terrorism a priori cannot be a topic for dialogue between the leaders of Russia and Qatar. Only Syria and the Middle East region remain.

The positions of Moscow and Doha regarding the Syrian crisis are well known. However, Tamim bin Hamad Al-Thani, not Vladimir Putin, turned out to be in the capital of the enemy, which already says a lot.

Some observers suggested that the Qatari emir used the “Saudi attack” practice during the negotiations, that is, he made the Russian leader an advantageous offer (investment or procurement of weapons, for example), and in exchange demanded that Moscow's position regarding Syria be revised. However, this is absolutely not a Qatari style, and the current situation is completely different.

It seems obvious that the Qatari emir flew to Moscow for the sake of discussing the postwar world order of Syria. We have repeatedly noted that the Syrian conflict is likely to be resolved during negotiations between official Damascus and the so-called opposition. The success of the government forces will be the “Damascus argument” at these negotiations.

However, the incorporation of overtly Islamist forces (behind which Doha, Riyadh and Ankara stand) into the power structures of Syria is excluded, and therefore Qatar can be left out because two years ago it made an exceptional bet on the Salafi element. The Muslim Brotherhood Brigades, which are patronized by Doha, today are few and unauthorized, that is, there is no place for them in future Syria.

However, Qatari partners in the terrorist coalition in the person of Turkey and Saudi Arabia have in their assets a number of groups that, under certain circumstances, can be moderate. That is, Ankara and Riyadh, unlike Doha, have certain chances for the post-war incorporation of their Basmachis.

Thus, the main sponsor of the most efficient and effective terrorist group in Syria may simply not fit into the process of "peaceful settlement of the Syrian conflict." It seems clear that this circumstance explains the Moscow visit of the Qatari emir. Simply put, Doha is trying to find its place in the postwar world order of Syria, which is already under the Moscow wing.

Ctrl Enter
Noticed oshЫbku Highlight text and press. Ctrl + Enter
We are
The main thing - do not play too much ("Polosa", Israel)Coup in Qatar: Did Ikhvan Abdelazizovich with Ihvan Khalifovich quarrel?
46 comments
Information
Dear reader, to leave comments on the publication, you must to register.