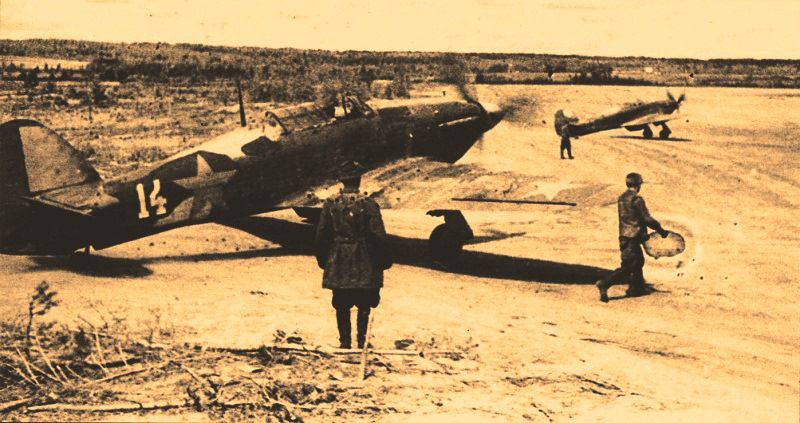 The dream of flying captured Vladimir Pokrovsky in his school years. When he was a twelve-year-old boy, he first saw the Pravda agitation plane. Then it was eager to become a pilot. The young man graduated from the nine-year-old, completed his studies at the Leningrad Maritime College, was preparing for long voyages, but his soul was eager for heaven. The dream came true in the summer of 1937, when Pokrovsky entered the Yeisk Naval District with a ticket to the Komsomol Regional Committee aviation school. He mastered the U-2 and R-5 aircraft and mastered the new then-I-16 fighter. Things were going fine. The instructor noted that Pokrovsky was distinguished by high professional qualities: good coordination of movements, a large amount of attention, the ability to analyze errors, and quickly correct them. The innate abilities, the enviable persistence with which he comprehended the theory and practice of flights, helped him to be the first in the group and link to fly onto the I-16 independently.

Having perfectly graduated from college in the fall of 1940, the second lieutenant Pokrovsky was assigned to the 72nd mixed air regiment (later the 2nd Guards) of the Northern Air Force fleet. He was in the squadron of senior lieutenant Boris Safonov, whose slave was from the first days of the war. Wing to wing went into battle with him, took over experience, studied Safonov workshops, swift attacks, German planes appeared in large groups at that time, and our pilots usually flew in a couple or three: there were not enough planes.

The episode is widely known when Safonov, Pokrovsky and junior lieutenant Maksimovich rose to meet the 18 Ju-88, covered by the "Messerschmitts". The link did not allow the bombers to bomb precisely. The squadron commander hit the lead car, the line fell apart. On the ground, he firmly embraced and kissed Vladimir, who had become a reliable cover for him.

Soon Pokrovsky himself won the first victory. While on duty paired with pilot S. Surzhenko, he was alerted. The fascists were approaching the airfield at low altitude. Pokrovsky took off, but the slave could not - his fighter fell under the fragments of a bomb. Four Bf.109 pounced on a single plane. In a fierce battle, skillfully maneuvering, Vladimir destroyed the "Messer." But he himself was wounded in the face. The plane was damaged, almost ceased to listen to the rudders and went into a tailspin. One could use a parachute, however, each AND-16 was at that time worth its weight in gold. And the pilot decided to save him. With the help of the motor, it was possible to stop the disastrous rotation of the machine, to go into a horizontal flight near the ground. Poured in blood, Pokrovsky managed to reach the base. After treatment at the hospital, he returned to his unit. 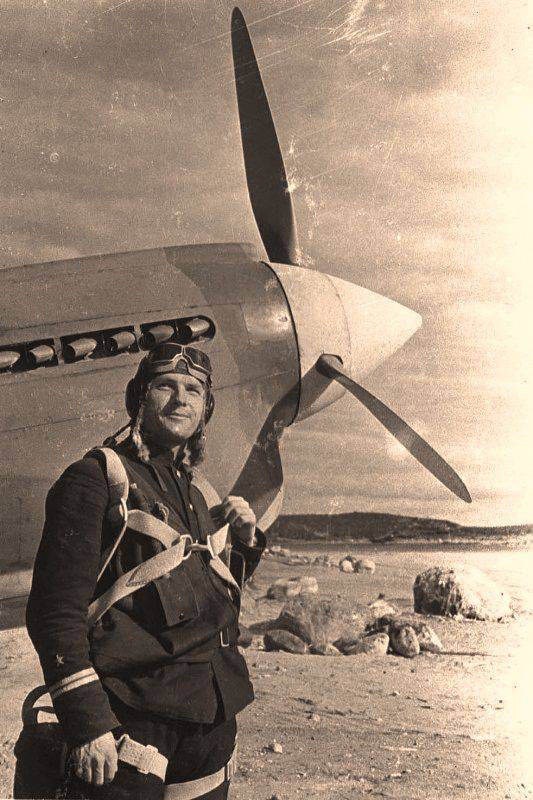 Particularly memorable in his front-line biography, Pokrovsky himself considered the day when Safonov twice drove aviators to cover the troops, which reflected the fierce onslaught of the Germans against Murmansk. And both times I had to fight with the enemy forces, exceeding the North Sea 7-8 times.

Vladimir Pavlovich recalled that on that morning five of our fighters attacked more than 20 bombers flying, accompanied by approximately 20 "Messerschmitt". At a signal leading safonovtsy went to them from the sun. The commander on the move struck the head "Junkers", Pokrovsky also managed to set fire to one. In the second attack, Safonov and Maksimovich shot down two more cars. Story broken. Fleeing, the Nazis began to throw bombs in the area of ​​their positions. The pair A. Kovalenko, covering the strike group, also destroyed Bf.109. As a result, the enemy lost five aircraft. 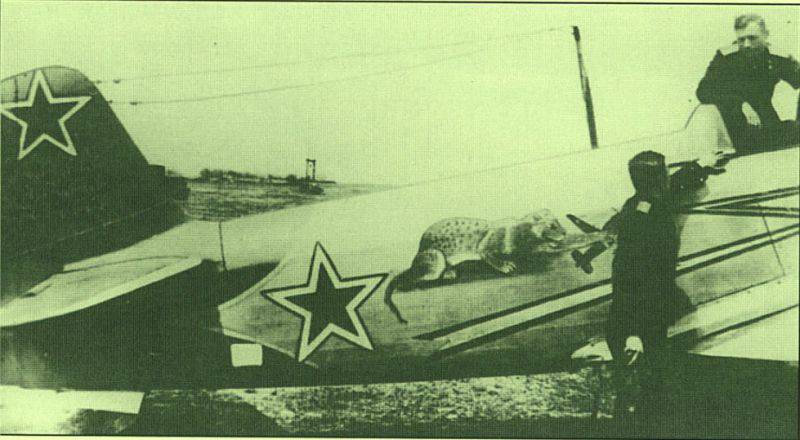 A few hours later, Safonov again raised the squadron pilots. This time they intercepted 30 Ju-87, shot down the 5 of them. One - on account of Pokrovsky. The panic began. Some of the fascist pilots could not stand it, radioed in clear: "Save yourself, we are surrounded!" Soon the enemy fighters arrived to the aid of the "Junkers". The number of German cars increased to 52. But the North Seamen did not retreat, entered the battle and won it. When returning met reconnaissance aircraft. Leading caught up with him and destroyed. This victory ended two sorties North Sea 15 September 1941 g.

The next day, Safonov was awarded the title Hero of the Soviet Union, and the regiment in which he served became the Red Banner, and Pokrovsky was awarded the Order of the Red Banner. The high awards obliged the pilots to fight even more actively, and in January 1942, six enemy aircraft were listed on Vladimir’s battle account.

But Pokrovsky not only selflessly fought with the Nazis in the sky. He, the Komsomol Squadron, had enough work on the ground. We need to talk with the newcomers to help them enter the system more quickly, prepare and hold a bureau meeting, Komsomol meeting ... Relying on the asset, Vladimir managed to do a lot, managed to mobilize young aviators for the excellent implementation of each task. Soon he was handed a party ticket.

In his memoirs, Pokrovsky often emphasized good, friendly relations between pilots and engineers, technicians, and mechanics of the mechanics of the regiment. “We highly appreciated the selfless work of loyal comrades,” wrote Vladimir Pavlovich. - When I took off and went to intercept the enemy, I always knew that the plane and weapon, prepared by Kiryanov, Prosuzhih, Popov, will not let you down. I do not remember the case of failure of the engine or machine gun through the fault of ground specialists. No wonder the commander called them our bodyguards. " No matter how many holes a plane received, it was quickly put into operation. Technicians and engineers worked wonders not only in the recovery of vehicles, but also in carrying out tasks to enhance the firepower of fighters, received through lend-lease. So, at the suggestion of Safonov, approved by the command of the Air Force of the fleet, the armament of the Hurricanes was improved. They installed 2 guns and 2 machine guns of domestic production, guides for rockets. The work was carried out with the active participation of the engineer regiment B. Sobolevsky and aircraft workshop specialists. The pilots noted that the effectiveness of attacks increased. 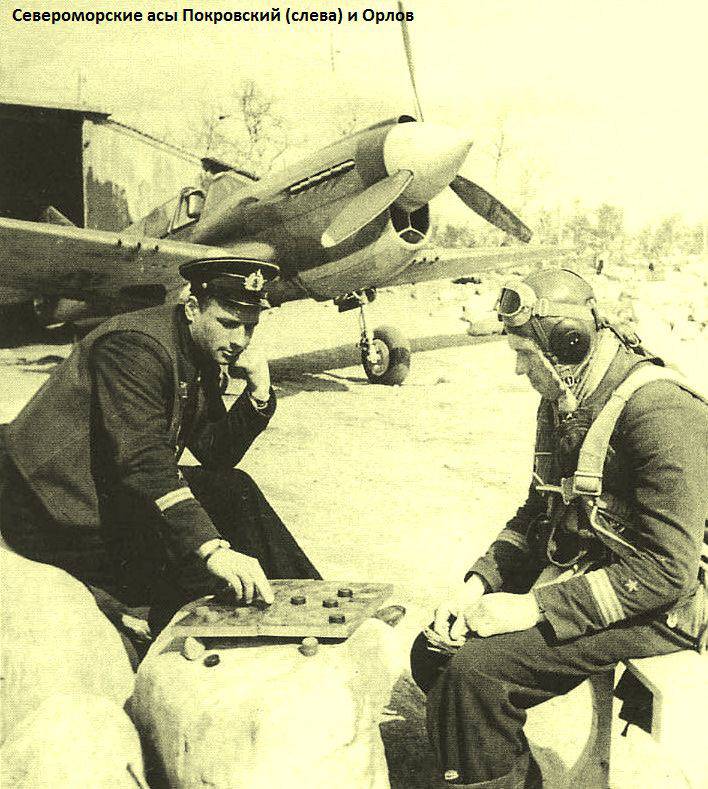 Boris Feoktistovich was not only a top-class air fighter, but, in the opinion of his colleagues, a good commander, methodologist and educator. He believed: only a fight and a careful analysis of each departure can become a real school of skill. Noticing the best qualities of his subordinates, he sought to develop them, to make of a novice a skillful, courageous, self-confident, cold-blooded warrior. He took the young officers to be led, so that they could visually see and learn how to go on the attack, evade enemy lines, strike. So it was, for example, with D. Reutov, who initially opened fire from a long distance, allowing the fascists to go unpunished. Having climbed up with him in a pair, the commander skillfully got close to the Junkers to 50 meters, destroyed the shooter. The subject lesson worked on Reutov better than any explanation. Subsequently, he repeatedly achieved success.

The fellow soldiers well remembered the incident that occurred with the lieutenant 3. Sorokin. On the first sortie, he shot down a fascist fighter, but made some mistakes. After chasing the Messer, he threw the presenter, started shooting from afar, spent the whole ammunition. After landing, Safonov told Sorokin: “They don’t fight like that ... You left the commander without cover. How it could end, no need to explain. " Departure thoroughly analyzed. The commander recalled that mutual assistance and clear engagement are a mandatory and unshakable rule. “In battle, you are calm only then,” he said, “when you believe in a partner ... In turn, the leaders must protect the followers and help them in a timely manner.”

Safonov flew very often, and almost every time Pokrovsky was next to him. He also had the opportunity to participate in the last battle for Boris Feoktistovich - 30 in May 1942, when our three fighters covered the Allied convoy. On that day, Safonov destroyed three Junkers. His pilots, Pokrovsky and Orlov, were shot down by car. Having lost five planes and dropped bombs anywhere, the Nazis left the battlefield. Ships and transports arrived in Murmansk unscathed. But the commander did not return to the airfield.

Vladimir Pavlovich said that that morning the four of the recently assembled and just flown tomahauks, headed by Safonov, headed for the sea. Soon, due to interruptions in the operation of the motor, the slave commander A. Kukharenko returned to the airfield. A further flight continued by three cars. Meanwhile, a convoy and approaching bombers approached it. Our pilots immediately attacked the leading group of "Junkers". A fierce battle ensued, the link broke up. Neither Pokrovsky nor Eagles had a direct connection with the commander. Returning home slave, we learned that Safonov told the KP about the "Junkers" he had shot down and almost immediately about what was going on the forced. From one of the ships, the escort watched as the fighter, losing altitude, walked towards the convoy and disappeared into the waves of the raging sea. The cause of the death of the commander remained a mystery. Until his last days Pokrovsky believed that Safonov had been driven by a motor that had failed at the height of the battle.

You can understand the feelings of fellow soldiers Safonov, who learned about the death of a beloved commander and teacher. But the war continued, and there was no time to surrender to grief. Pokrovsky sought new hard victories. Once, covering the convoy, the pilots led by him intercepted a group of fascist aircraft. Severomortsy crashed into battle and forced the bombers to drop bombs into the sea. Acting in the zone of anti-aircraft fire of escort ships, Vladimir fought a fighter before everyone’s eyes. Astonished gunners saw a bold "hawk" throw through the deadly barrier and reduced the power of fire. But a crazy projectile landed in the fuselage of the Pokrovsky machine, and set it on fire. The aviator jumped with a parachute, landed in an ice font and was picked up by boats. 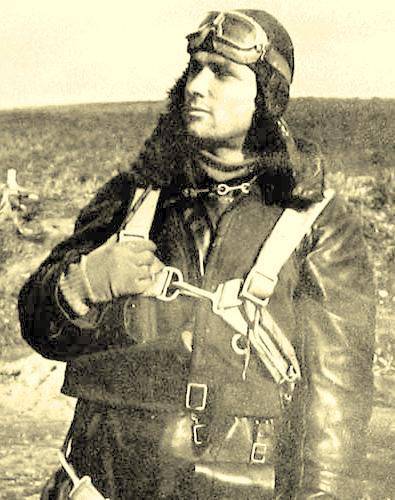 In the submission of Pokrovsky to the title of Hero of the Soviet Union (he became in July 1943), it was noted: “A genuine Safonovets, an excellent comrade of Lieutenant Colonel B. F. Safonov, he is the personification of his teacher by military deeds. The courage of the attacks, the accuracy of the fire, the exceptional swiftness of the battle, and the unlimited hatred of the enemy created a huge deserved authority for Pokrovsky not only among the personnel of the regiment, but also far beyond its borders. ”

After the war, Vladimir Pavlovich continued his service in the Soviet Army. In 1954, he graduated from the Air Force Academy. In 1956, the rank of guard Colonel Pokrovsky was dismissed. V.P. died. Pokrovsky 22 March 1998, and was buried at the Seraphim cemetery of St. Petersburg. 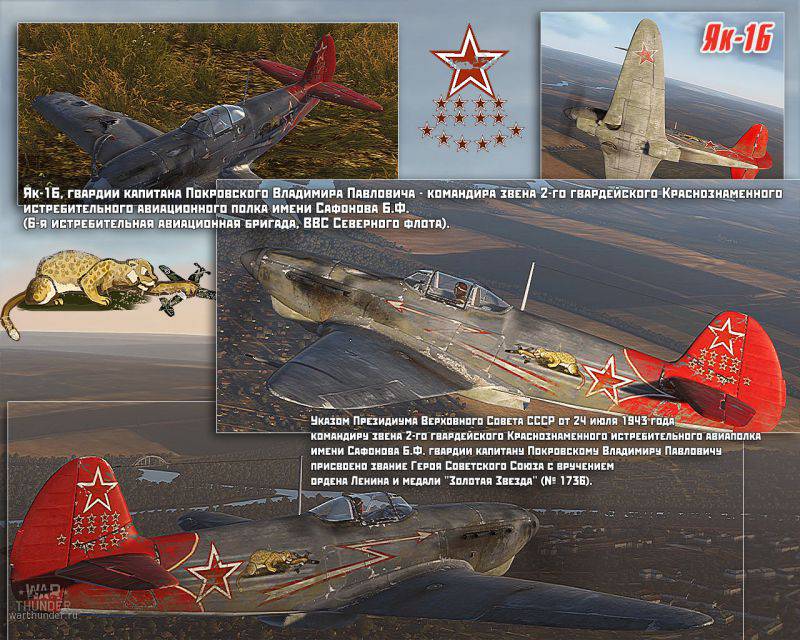 Ctrl Enter
Noticed oshЫbku Highlight text and press. Ctrl + Enter
We are
The first twice hero of the Soviet Union“Not by number, but by skill!”, Or Raven’s rebuff
14 comments
Information
Dear reader, to leave comments on the publication, you must to register.