February 1 2016
182
The Russian company Rosnano, whose chairman of the board remains the permanent Anatoly Chubais, with his deputies Yakov Urinson and Andrei Rappoport, publishes fresh news about his stormy research and production activities. The publications are of particular interest, especially if one considers the presence of the sensational statement by Anatoliy Borisovich mentioned above at the New Year party corporate event that “we (that is, they) have a lot of money ... a lot of money”.


So, from the January news company:
Rosnano portfolio company RST-Invent has developed a special label for marking fur coats and other fur products.

The TwinTag tag can be manufactured with different models of UHF chips, which not only allows for the uninterrupted production and supply of tags to customers, but also significantly expands the range of possible TwinTag applications. The TwinTag design allows you to use a label in solutions that require stable registration of objects in different planes (3D format). In addition, the registration distance of TwinTag reaches 11 meters, which greatly exceeds the existing ones on the market.

This is an unconditional breakthrough of nanotechnology, because the employees of Rosnano and spouses (as well as other body ladies) of Rosnano employees clearly experienced particular discomfort when traveling around Moscow in unmarked mink coats ... Now, with the registration of a fur coat in 3D format with 11 distance meters - is another matter ... the problem is solved nanotechnology. It is a pity the report does not say how much budget funds were spent in Rosnano to support the portfolio company, which decided to mark the coats with “registration in different planes”.

Other news:
"Rosnano" withdrew from the investment project to create drugs.

The company is especially proud to report that the sale of the share of the Nanotechnology Center of the Republic of Tatarstan in an international pharmaceutical project led to the receipt of 152 million rubles. The share of the company from Tatarstan was sold to the “daughter” of Izvarino Pharma AB, which is under Swedish jurisdiction. Who exactly (the Swedish “partner”?) Will eventually develop and be responsible for the quality of the development of previously declared medicines aimed at treating cancer is an open question. To what extent the receipt of 152 million rubles from the sale of the share of the CNT of the Republic of Tatarstan in terms of the number of investments made in the pharmaceutical project is also a question, and also open.

The news is dominated by reports on the speeches of Anatoly Chubais, Chairman of the Board of Rosnano. In one of his speeches, Anatoly Borisovich tells grateful listeners about how nanotubes being developed in the company help to combat global warming, in another - at the Gaidar Forum - talks about the economic situation in Russia, in the third - already at the so-called Sberbank business breakfast in Davos - about the technosphere, the technological revolution, as well as about metal, cement and plastic ...

In the meantime, Anatoly Borisovich otkushivaet at business breakfasts, comes the information that one of the ambitious projects Rosnano is bankrupt and, apparently, in a short time finally cease to exist. This is a plant for the production of lithium-ion batteries of the company "Energy Solutions" (previously - "Lithium-ion technology" - "Liotech"). 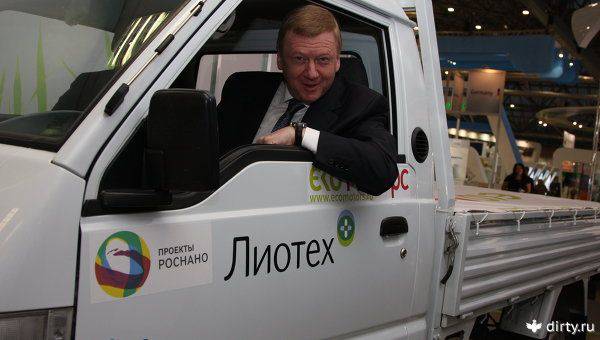 The Arbitration Court of the city of Novosibirsk recognized the company as a hopeless debtor and ordered the bankruptcy proceedings to begin. This news agency reported TASS. In the press service of "Rosnano" TASS correspondent was told that, say, the sphere of creating lithium-ion batteries, they are very worried that "all measures" were taken, but the crisis ...

From the statement of the representative of the press service "Rosnano":
We expect that during the monitoring procedure, the development of new, more demanded by the market solutions will be completed in such promising segments of the use of electric energy storage devices, such as healthcare, energy, housing and utilities and the defense industry, which will allow the company to overcome the crisis.

That is, for the entire existence of the company (since 2011), no solutions sought for in the market have been found? And at the time of the bankruptcy procedure, such solutions are planning to find? Famously...

It would seem, well, what, in fact, the problem is ... - indeed, the crisis ... the company should think about the intensity and relevance of the developments. And the problem is that the total investment in the Liotech created in 2011 amounted (attention!) To almost 15 billion rubles. And where are these investments now? According to the line of the Ministry of Economic Development of the Novosibirsk Region alone, the company received almost half a billion budget funds, which is not a wasteful amount for the region. In the year mentioned by 2011, the Chinese from the Thunder Sky Group decided to invest in Liotech, but two years later they decided that there were obvious problems with these lithium-ion batteries of the Rosnano project and they understood that it was time to go. After the withdrawal from the project of the Chinese company, the case did go in the wrong direction to which it was originally announced. Debts were growing, and there was still no demand for products on the market, although the request for it was a priori more than substantial. As a result, the Novosibirsk authorities, through court, demanded that Liotech reimburse the half-billion investments previously allocated, but Liotech said: there is no money, because the products are still under development ...

New lawsuits against the company led to new demands to recover funds from Liotech. This amount is 8,6 million rubles. And if “Rosnano” is not ready to help the company to repay this debt, at the same time stating that it hopes to finish the development of “marketable products”, then for what purpose was Liotech created? And who in general is responsible and responsible for financing the development of plans for rapid work in the billions of rubles? Mackerel? Or accountant Berlaga? ..

Ctrl Enter
Noticed oshЫbku Highlight text and press. Ctrl + Enter
We are
Bankrupt man. The loudest projects of Anatoly ChubaisResults of the week. “But is it not enough in Pedro in Brazil ?! And do not count! "
182 comments
Information
Dear reader, to leave comments on the publication, you must to register.