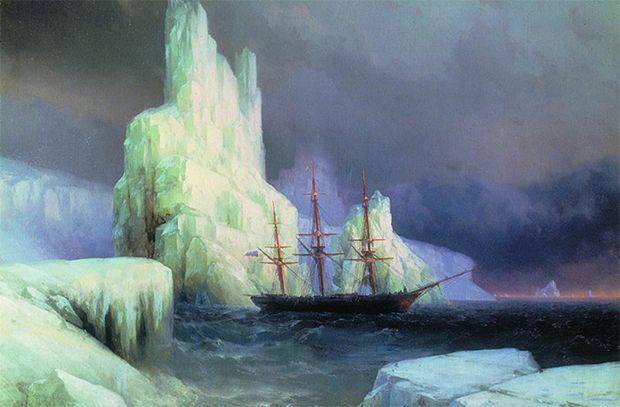 After circumnavigation of the famous English explorer James Cook, the question of the existence of an “unknown Southern mainland” - Terra Australia incognita - was considered not just closed, but indecent. Cook, who embarked on his journey as an ardent supporter of the existence of the continent south of the 50 parallel, returned from him an equally ardent opponent of this idea. And on the basis of his research and conclusions, both British and French scientists decided that there are no continents in the South Pole region and there can not be.

However, many phenomena quite clearly indicated the opposite. Moreover, no matter how high Cook's authority was, at the beginning of the XNUMXth century he was already subjected to serious criticism. And there is nothing surprising in the fact that Russian sailors, for whom this period became a time of access to the expanses of the oceans, also swung to explore the southern polar seas. Russian asset fleet already were the first in his stories the round-the-world expedition of Ivan Kruzenshtern and Yuri Lisyansky, undertaken in 1803-1806, and the round-the-world journey of Vasily Golovnin on the sloop Diana in 1807-1809, and the round-the-world Otto Kotzebue in the Rurik brigade, stretched out with XUMNUM, XUMNUMX-1815. And all the results of these trips suggested that the southern polar continent should exist.

To prove this assumption, a separate expedition was required, the task of which would be extremely narrow and reduced to the search for the southern continent. This is precisely how the idea was expressed by the commander of the first Russian round-the-world expedition, Ivan Kruzenshtern, who sent 31 March 1819 to the Russian maritime minister Marquis Ivan de Traversay for the need to study polar waters. Krusenstern offered to organize two expeditions at once - to the North Pole and the South Pole, and in each include two vessels. Accordingly, these pairs were named "Southern Division" and "Northern Division." The commander of the “Southern Division”, at the suggestion of Kruzenshtern, was Captain Second Rank Faddey Bellingshausen, whom the mastermind of the expedition knew well as a subordinate on his first round-the-world trip. Under the direct command of Bellingshausen, the Vostok sloop of British construction was handed over, and the commander of the second ship, the Mirny sloop, designed by Russian engineers Kolodkin and Kurepanov, was Lieutenant Mikhail Lazarev. It is noteworthy that his younger brother, Aleksey Lazarev, also soon went on a polar campaign: a lieutenant on the sloop "The Well-intentioned" as part of the "Northern Division".

The sloops of the “Southern Division”, whose crews were fully staffed with volunteers - and it should be noted that there was no shortage of volunteers, quite the contrary! - went into their historic voyage from Kronstadt 16 July 1819 of the year. In the documents of the expedition, its purpose was formulated briefly and rather vaguely: the discoveries “in the possible proximity of the Antarctic Pole”. There was a meaning in this vagueness: no scientist of that time would undertake to predict the results of the research, and under the “possible proximity” hid all the southern waters of both the Pacific and Atlantic and Indian oceans — waters that interested the Russian fleet as an area of ​​possible expansion.

The first stop on the long journey of the “Southern Division” was English Portsmouth, where the ships were delayed for a month, getting the necessary equipment and equipment. From the coast of Britain, "Vostok" and "Mirny" moved towards Brazil, making a short stop on the island of Tenerife, and then reaching Rio de Janeiro. This way was already familiar to the Russian sailors from their previous round-the-world voyages. But after Brazil, as the sloops went farther south, areas of completely new areas began.

January 27 (new style) Russian sloops 1820, for the first time in the history of the Russian fleet, crossed the Southern Arctic Circle. And the next day, "Vostok" and "Peace" approached close to the ice barrier of the Antarctic continent. In his expedition diary, the Commander of the Southern Division described the event as follows: “Continuing south, at noon at latitude 9 ° 21'28" and longitude 2 ° 14'50 "we encountered ice, which seemed to us through the snowing as white clouds. And the commander of the sloop “Mirny”, Lieutenant Mikhail Lazarev, later in a letter to his friend and classmate on the Marine Corps, Alexey Shestakov, found more emotional words: “On January 16 we reached the latitude of 69 ° 23 'S, where we met experienced ice of extreme height, and on that beautiful evening looking at the saling, it stretched as far as it could only reach sight ... From here we continued our way to the island, trying at every opportunity to the south, but always met the icy continent, not reaching 70 ° ... Finally, that mother in the south land to oruyu've been looking for and the existence of means Filozof sitting in the offices of his thought necessary for the balance of the world. "

But Russian sailors were not limited to just one first acquaintance with the new continent. Continuing to move to the east and not leaving attempts again and again to move further south, they each time came across “hard ice”, making sure that they were dealing with the mainland coast, and not the islands. In the end, in early February, the ships turned north and soon arrived in Sydney, Australia. Having replenished stocks and having corrected the spars and rigging, the sloops set out for three months in the tropical waters of the Pacific Ocean, and then, returning briefly to Sydney, 31 of October again moved towards the newly discovered land. Without leaving any attempts to move as far south as possible, Vostok and Mirny eventually went around Antarctica, finally proving not only the existence of a new continent, but also the fact that, contrary to the ideas of some geographers, it does not connect with South America. During the second phase of Antarctic navigation, the island of Peter I (22 January 1821 of the year) and the Land of Alexander I (29 January 1821 of the year), the largest island of Antarctica, were discovered.

Home to the Baltic, the discoverers of Antarctica returned 5 August 1821 of the year. On that day, the sloops Vostok and Mirny entered the Kronstadt raid and soon anchored in the same places that 751 took off from a day ago. Astern, they had 49 720 nautical miles — two and a quarter of the equator, or nearly 100 000 kilometers! In addition to Antarctica, during the expedition of the "Southern Division" 29 islands and one coral reef were discovered, many of which received the names of Russian sailors - participants in a unique voyage. But still, in the history of both the Russian fleet and world science, everyone who was aboard the sloops Vostok and Mirny will forever remain as people who made the largest geographical discovery after the beginning of the 19th century — the opening of the sixth continent, “the unknown Southern Land , The discovery of Antarctica.

Ctrl Enter
Noticed oshЫbku Highlight text and press. Ctrl + Enter
We are
How Russian sailors discovered Antarctica
3 comments
Information
Dear reader, to leave comments on the publication, you must to register.