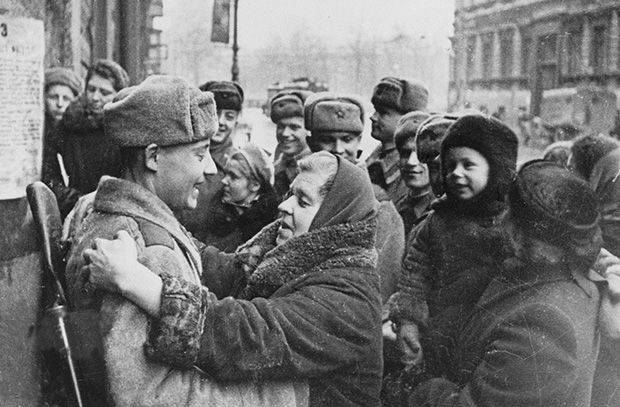 The terrible blockade of Leningrad, which took over 950 thousands of lives of ordinary citizens and fallen soldiers in battles, lasted 872 day. Almost two and a half years - from September 1941-th to January 1944, the Nazi troops surrounded the city on the Neva River, daily killing it with hunger, bombing and artillery shelling.

The Soviet troops managed to break through the blockade only in January 1943, but the blockade was completely lifted only a year later. Then, during the January Thunder offensive, by 27 January, 1944, our troops had driven the occupiers far from Leningrad. Now, this date is celebrated as the Day of the complete liberation of Leningrad from the fascist blockade, and January 27 is one of the Days of Russia's military glory.

The final lifting of the blockade from the second most important city of the USSR was a very difficult task. For more than two years, the Germans had prepared here several powerful lines of fortifications; in the direction of the main attack, the defense was holding parts of the SS 3 tank corps. Near Leningrad, the Germans concentrated most of the heavy artillery of the Third Reich, including all captured weapons collected in the captured countries of Europe.

The heavy artillery that had been liberated after the Germans captured Sevastopol was transferred here. In total, 256 of the most powerful artoriums, including 210-mm and 305-mm Škoda Czechoslovak mortars, 400-mm railway French howitzers and 420-mm German Mortars "Fat Berta", were located near Leningrad. This artillery group not only bombarded Leningrad daily, but also ensured the special strength of the German defense lines.

Directly near Leningrad, the Soviet command was able to create superiority over the enemy - 400 thousand fighters against 170 thousand from the Germans, 600 of ours tanks and self-propelled guns against 200 German, about 600 aircraft against 370 German. However, near Leningrad, for the siege and shelling of the city, the Germans concentrated a serious artillery group - 4500 guns and mortars. The Soviet artillery group here totaled about 6000 cannons, mortars and rocket launchers. Thus, the battles for the final liberation of Leningrad from the blockade turned into the most powerful confrontation of artillery fists in the entire Second World War. 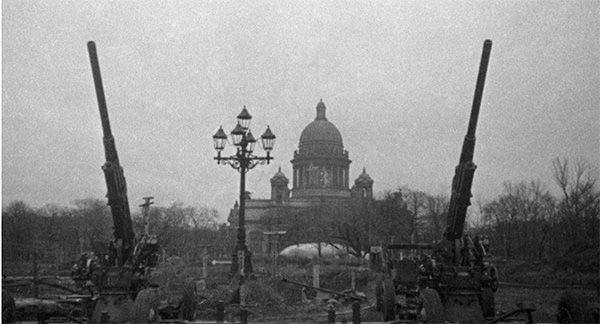 Military equipment near St. Isaac's Cathedral. Photo: Anatoly Egorov / RIA News
The operation, being developed at the Supreme Command Headquarters, was codenamed “January Thunder”. In preparation for the 1-3 operation in January 1944, its details were discussed and agreed upon by Stalin himself and his closest associate Andrei Zhdanov, who had flown in from Leningrad, who had been carrying out top state leadership in the surrounding city during the blockade years.

Returning from the Headquarters, at the last meeting of the headquarters of the Leningrad Front, on the eve of the offensive, Zhdanov said the following words: “They praise us and thank us for defending the city of Russian glory and were able to protect it. Now it is necessary that we also be praised by the Soviet people for their heroism and skill in offensive battles ... ”

For more than two years of blockade, the troops of the Leningrad Front proved their heroism in defense, but now they had to attack and penetrate the well-trained positions of the enemy. In developing the operation “The January Thunder”, the Soviet command provided for a simultaneous strike from Leningrad and from the territory of the Oranienbaum bridgehead, a small patch on the southern shore of the Gulf of Finland, which the Soviet troops held all the blockade from 1941 onwards.

Our offensive began on 14 on January 1944 of the year on 10: 40 of the morning after a powerful 65-minute artillery preparation. During the first day the Soviet troops advanced 4 km, taking up with stubborn battles the entire first line of enemy defense. The next day, the offensive continued after the 110-minute artillery preparation. For three days, our troops literally “gnawed” the German defense lines — the enemy in well-trained positions fought back desperately, constantly switching to counterattacks. The German defense was effectively supported by powerful artillery, a mass of fortifications and numerous minefields.

By January 17, the Soviet troops managed to break through the enemy’s long-term defense and introduce the 152 Tank Brigade, which had been formed in the besieged Leningrad in the 1942 year, to break through. Her T-34 tanks broke through to Ropsha, the German forces between Leningrad and the Oranienbaum bridgehead were threatened. The Hitler command had to begin the retreat of their troops near Volkhov in order to free up part of the reserves for parrying the Soviet offensive near Leningrad.

However, the enemy did not succeed in stopping the “January Thunder” - in the morning of 20 on January 1944, the Soviet troops advancing from the Oranienbaum springboard and from Leningrad, meeting south of the village of Ropasha, surrounding and then destroying part of the enemy grouping. In just six days of uninterrupted combat, the troops of the Leningrad Front completely destroyed two German divisions, inflicting significant damage to five more enemy divisions. In addition, north of Krasnoe Selo, the German artillery group, created specifically for the shelling of Leningrad, was destroyed. 265 guns were captured, including 85 heavy mortars and howitzers. The shelling of the city on the Neva, which lasted two years, was stopped forever.

For the next week, the Soviet troops continued their offensive, throwing the enemy further from Leningrad. On January 24, the city of Pushkin (Tsarskoye Selo) was liberated, with its famous palaces plundered by the German occupiers.

The result of the January Thunder offensive operation was the complete lifting of the blockade of Leningrad, our troops broke through the well-prepared enemy defenses and dropped it 60-100 km from the city. In late January, the attacking troops of the Leningrad Front reached the border of Estonia.

27 January 1944, in agreement with Stalin, the command of the Leningrad Front officially announced the final lifting of the blockade. In the city on the Neva, a victory salute was first given - 24 volley from 324 guns.

On that day, the command to the troops and the inhabitants of the city said: “Citizens of Leningrad! Courageous and resistant Leningrad! Together with the troops of the Leningrad Front, you defended our hometown. With your heroic work and steel restraint, overcoming all the difficulties and torments of the blockade, you forged weapon victories over the enemy, giving all their strength to the cause of victory. On behalf of the troops of the Leningrad Front, we congratulate you on the significant day of the great victory near Leningrad. ”

Ctrl Enter
Noticed oshЫbku Highlight text and press. Ctrl + Enter
We are
Day of Military Glory of Russia - Day of the complete liberation of the city of Leningrad from the blockade (1944 year)Diplomats of the People's Commissariat of Defense: on the eve and during the war
7 comments
Information
Dear reader, to leave comments on the publication, you must to register.