February 5 2016
31
From 1959, the Soviet army began to use the Kalashnikov assault rifle, a modernized AKM, which replaced the basic AK. Together with the new gunshot weapons the fighters also received a new bayonet - the 6X3 product was created specifically for AKM. In the design of the bayonet and its scabbard several original ideas were used, which greatly expanded the range of tasks performed. Due to several innovations, the 6X3 bayonet could be used not only in hand-to-hand combat or as a regular knife.


The bayonet for AKM was developed not from scratch. The basis for it was taken so-called. the knife of sea scout divers, created by lieutenant colonel of the naval service RM Todorov. In the mid-fifties, this knife was proposed to the command of the Soviet Navy and even found limited use in the army. The main feature of the knife Todorov was the design of the blade. He had a double-edged fighting end with a concave upper blade. A serreitor was provided on the butt, and there was a rectangular hole in the middle part of the blade. Included with the knife was an additional blade in the form of a curved plate with a mount and a hook blade. The mount should be inserted into the hole of the blade of the knife, after which the resulting design could perform the functions of the pliers. 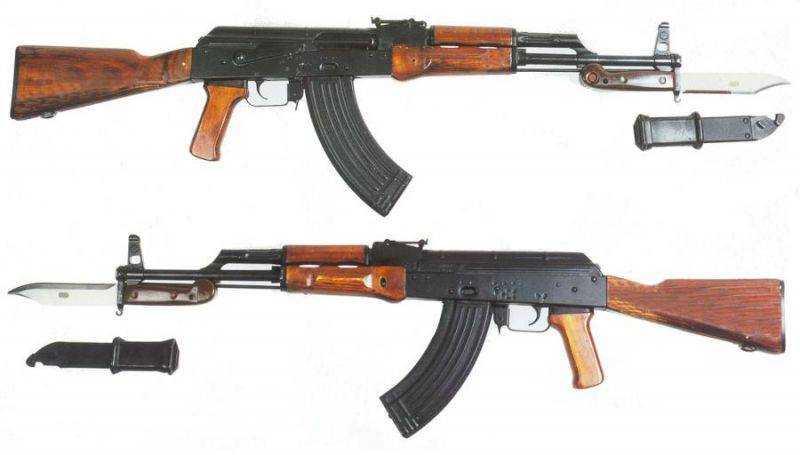 Gunsmiths from the team of M.T. Kalashnikov had the opportunity to get acquainted with the "sea" knife and became interested in him. The result of this interest was the widespread borrowing of ideas and solutions from the project of R.M. Todorov. The perspective bayonet knife 6X3 for the AKM submachine gun was developed on the basis of the naval reconnaissance knife. The resulting design turned out to be so successful that all subsequent domestic (and also some foreign) bayone-knives for automatic machines had a characteristic shape and special sheaths expanding the range of tasks to be solved.

By the mid-fifties, it became clear that the bayonet will now be used not only in fencing with weapons, but also for other purposes. It was assumed that such weapons will also be used as a knife. In the project 6X3, it was proposed to further expand the possibilities of the bayonet by borrowing and processing the original ideas of Todorov. In particular, it was proposed to create a completely new sheath, which is not just a device for storing a blade, but a full-fledged element of a multifunctional complex designed for cutting various materials and objects.

The main part of the bayonet 6X3 was a blade of length 150 mm and a maximum width of 30 mm, created on the basis of the "sea" knife of Lieutenant Colonel Todorov. The blade received a combat finish with a bevel and double-edged sharpening. At the bottom edge of the blade along the entire length there was also a sharpening. Such a blade design allowed stabbing and cutting blows. To solve additional problems in the middle part of the blade provided a rectangular hole designed to connect with the sheath. On a butt there was a gear notch. 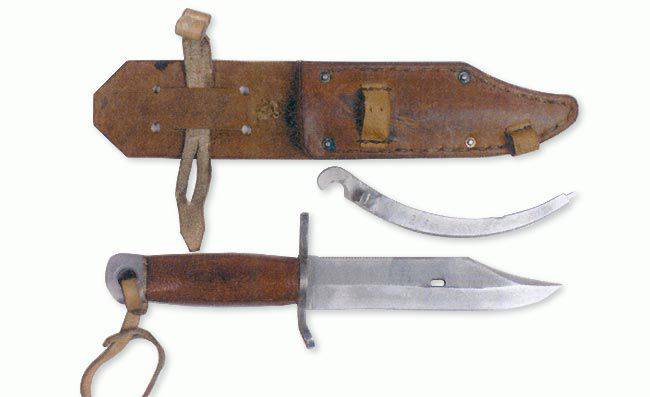 On the shank of the blade was attached to the cross with a ring on the side of the main blade with a diameter of 17,7 mm. On the side, the metal parts of the handle were covered with two plastic cheeks-plates with a characteristic round head. In the convex part of the head there was a groove in the form of an inverted "T" for mounting on the machine, as well as a spring-loaded latch. Latch control was performed using the button on the right side of the handle (when installing the bayonet on the machine). For additional ease of use on the handle and the cross was attached for the strap.

For mounting on the machine, it was necessary to put the cross-piece ring on the muzzle of the barrel, and also to place the T-shaped protrusion on the trunk tide in the groove of the handle head. When the bayonet was moved back, the ring sat on the barrel, and the protrusion entered the groove and was fixed with a latch. In this position, the bayonet could be used in hand-to-hand combat. In the combat position of the bayonet blade was at the top, and the butt with sharpening bevel - at the bottom. It was possible to apply piercing and cutting blows.

The bayonet 6X3 had a total length of 280 mm with the 150-mm blade, which was noticeably different from previous types of cold arms for rifle systems. In fact, it was the shortest bayonet in several decades or even several centuries, if we take into account the earliest domestic needle bayonets. Nevertheless, despite the relatively small size, this product fully complied with the requirements and could be used in the troops to solve various combat and auxiliary tasks. 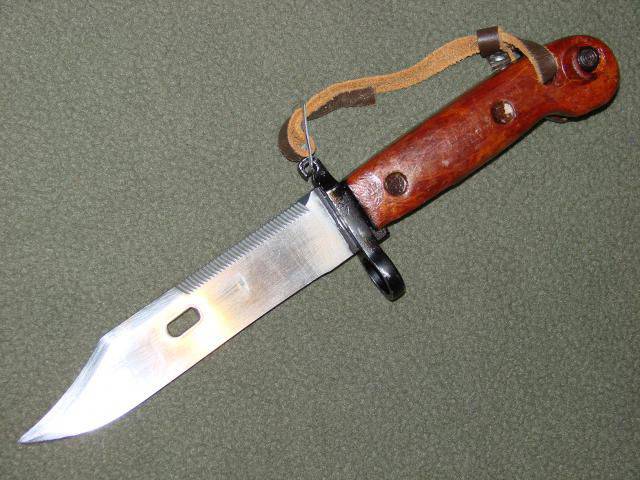 Thanks to a special device of a curved shape, the knife of R.M. Todorov could be used as pliers. The authors of the project 6X3 decided not to use individual parts and connect such a device with a scabbard, simplifying both the design of the weapon itself and its application. The main part of the scabbard was a metal tube of rectangular cross section, intended for storage of the blade. On the top of this part was a wide rubber pad, which served as a handle. A leather loop for carrying on a belt was fastened to the scabbard and carbine to the scabbard. To the bottom of the scabbard on the rivets fastened detail, performing the functions of an additional blade and equipped with an axis for the knife.

Having a specific design and an unusual sheath, the bayonet 6X3 was a versatile cutting tool. The main cutting edge made it possible to cut various materials, down to the metal. For cutting some objects it was proposed to use a serreytor on the butt. Wire fences, including those under the current, should be cut with a sheath. For this purpose, it was proposed to fasten the bayonet with its hole on the T-shaped support of the sheath, after which the blade and the notch in the lower part of the sheath could perform the functions of the pliers. Safety cutting wires under the current provided a plastic bayonet handle and a rubber sheath lining.

The production of bayonet knives 6X3 started in the late fifties, simultaneously with the start of assembly of AKM machines. The main sites for the production of these weapons were the Izhevsk and Tula arms factories. The Kalashnikovs, which had been modernized from the very beginning, were delivered to the troops along with new bayonets. For this reason, in particular, there were no problems with retrofitting weapons, as was the case with the AK machine gun and 6X2 bayonets. In addition, there were no compatibility issues, since the design of the fasteners of the machine and the bayonet were developed simultaneously. The number of machines and bayonets issued by the Soviet industry was approximately equal. 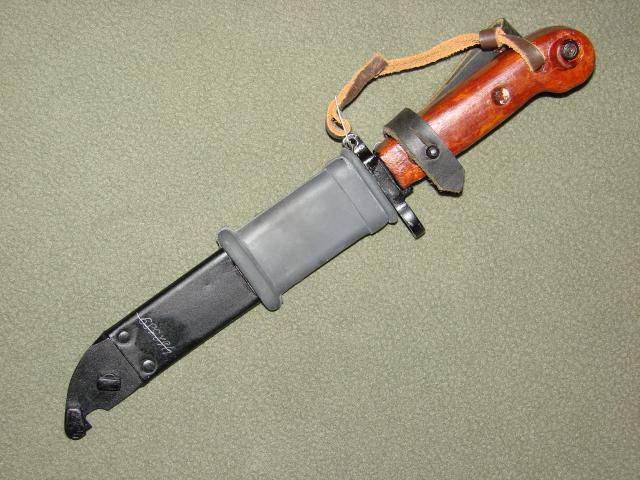 The bayonet in the sheath, clearly visible rubber pad and a device for cutting the wire on the sheath. Photo Rusknife.com

Some time after the start of operation of the AKM in the Soviet army, the industry of the USSR handed over documentation for the production of these weapons to several friendly countries. Thus, automatic machines and bayonets like 6X3 were made not only in our country, but also abroad. Taking into account foreign weapons, the total number of 6X3 bayone knives reaches several million units.

The bayonet 6X3 was originally designed for the AKM, but later began its use with other weapons. In 1963, the SVD Dragunov sniper rifle was put into service, which was also proposed to be equipped with a bayonet. The design of the muzzle part and the sagging of the barrel of this weapon was developed taking into account the use of the bayonet 6X3. For its attachment, the muzzle of the barrel of the required diameter was used and the influx on the lower part of the barrel. For obvious reasons, the sniper rifle was almost never used with a bayonet, because of which the latter served as a knife and supplemented the sniper's equipment.

With the adoption of the 6X3 bayonete in service, the army for the first time in Russian practice received not just a weapon for bayonet fighting, but a full-fledged multifunctional cutting tool for solving various tasks. Depending on the situation and the need, the 6X3 product could be used in hand-to-hand combat, in everyday life or in various auxiliary works, such as preparing passages in enemy barriers. The bayonets of previous models differed from the new 6X3 in less versatility. They could be used in hand-to-hand combat or, in some cases, as knives, but the scope of possible applications was noticeably smaller due to the lack of a notched notch and scabbard with special equipment. 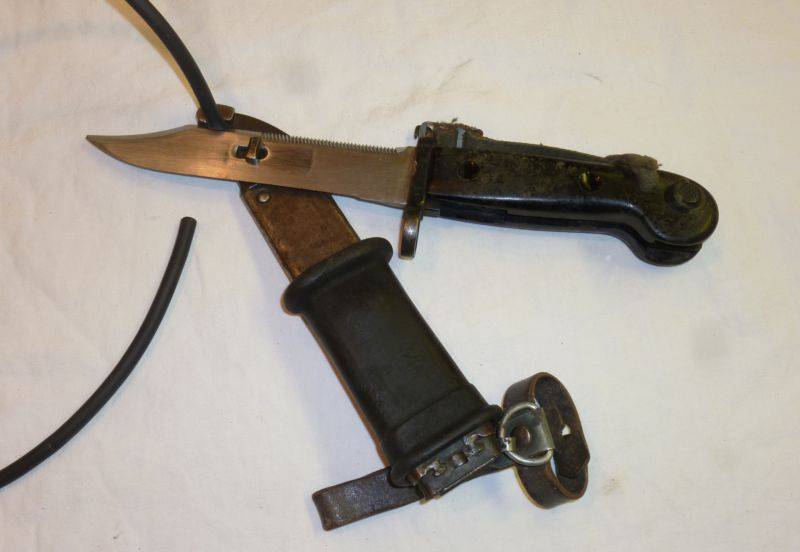 Demonstration of the use of 6X3 bayonet with sheaths as nippers. Photo of Wikimedia Commons

The use of a revised and improved knife design of Lieutenant Colonel Todorov allowed engineers from the team of M.T. Kalashnikov not only create a bayonet for the new machine, but also lay the foundations of a whole family of cold arms. In the future, based on the bayonet 6X3, several new models of similar weapons were developed for additional equipment of the machine guns. They received the handles of new designs, updated sheaths, etc., but the design of the blade and the main ideas of the projects remained unchanged. Thus, the currently used bayonets are a direct development of additional weapons for the AKM. In addition, the original 6X3 is still used in a number of armies in the world.

Considering the number of 6X3 products manufactured, as well as new designs based on them, it can be argued that this was one of the most successful and numerous bayonet knives in the world. "Sea" knife designs R.M. Todorova was not widely used, but the bayonet created at his base for the AKM machine gun was produced in large batches and used by many armies. All this speaks of the perfection of the two models and the correctness of the chosen approach to the development of a new weapon, which has fully justified itself.