February 4 2016
88
In the late forties, the Soviet army began to develop a new line of small weapons under the intermediate cartridge 7,62х39 mm. The full-scale production of the Kalashnikov assault rifle, the Simonov self-loading carbine and the Degtyarev light machine gun began. The widespread use of new ideas has led to the fact that the samples created on the basis of these weapons are still used in the Russian armed forces and armies of other countries. Despite a lot of innovations, the new weapon had to be equipped with “traditional” bayonets. It was necessary to provide for the possibility of installing blades on the automatic machine of the design of M.T. Kalashnikov and carbine systems S.G. Simonov.


It should be noted that the Kalashnikov assault rifle did not immediately receive a bayonet. AK of the first modification was made until the end of the fifties and existed in three main versions. So, the first version, known under the unofficial designation "Type 1", was produced from the late forties to 51. Later, production of the “Type 2” modification began, which differed from the basic one by some differences of a technical and technological nature. In 1955, the “3 Type” series was launched, which was produced before the start of AKM production. Automatic AK "Type 1" was not completed with a bayonet. Similar additional equipment was proposed only in the modernized project “Type 2”. In the future, all modifications of Kalashnikov assault rifles were completed with bayonet knives of various models.

According to reports, the ready-made bayonet for the automatic machine of the new model did not appear immediately. In 1951, the bayonet model 6X1 was developed, which, however, did not go into series. The design of this weapon had a number of characteristic features that did not ensure full compatibility with the machine guns of the first modification. To use such a bayonet, it was necessary to release new machines with the appropriate fasteners, or redo existing weapons. Naturally, such a design of the bayonet could not be approved for mass production and use. 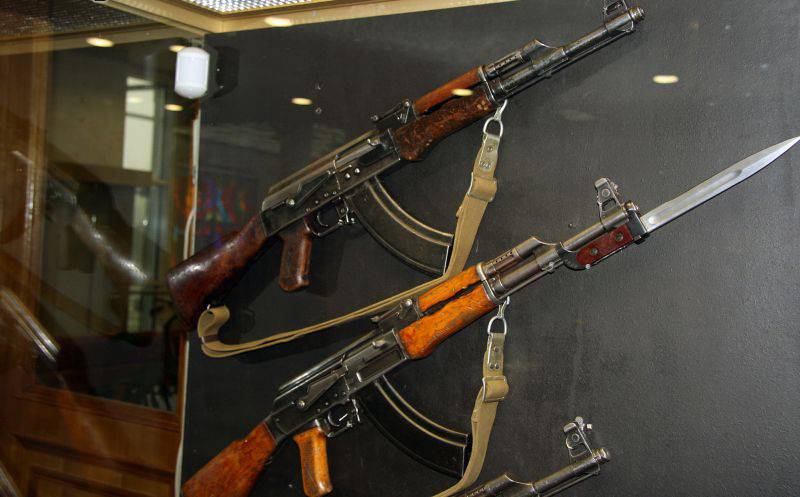 Kalashnikov assault rifles of the first versions. From above so-called. "Type 1", bottom "Type 2" with a bayonet. Photo of Wikimedia Commons

In the development of the first bayonet for AK, it was decided to use the developments in previous similar developments. The prototype of the bayonet 6X1 was a melee weapon for the Tokarev SVT-38 self-loading rifle. The blade of the base bayonet has undergone some minor changes, and the handle has been completely redone with the design of the new weapon. The result of this was the emergence of designs that could be considered almost completely new.

The total length of the 6X1 product was 310 mm, of which 200 mm was accounted for a blade 22 mm wide. The latter had a double-edged, symmetrical combat end. Also provided for sharpening on the upper edge (from the mount on the handle). On the side of the blade were oblong valleys. Behind the heel of the blade was a metal crosspiece with attachments for mounting on the weapon. Behind the cross there were two cheeks, fastened with screws. The head of the handle was made of metal and had a slot for mounting on the machine, as well as a latch with a button.

For installation on the machine bayonet 6X1 had a pair of mounts. On the upper part of the cross, there were two L-shaped brackets turned towards each other. A similar design, but in the form of a large part with a groove in the form of an inverted "T" was in the back of the handle. When mounted on an automatic machine, the L-shaped brackets should cling to the muzzle of the barrel, and the T-shaped groove included the teeth on the lower inlet of the gas chamber. The fixation on the weapon was provided with a spring-loaded latch. By pressing its button, it was possible to free the bayonet and remove it from the machine.

For carrying the bayonet, the standard for that time metal sheath of an oblong shape was proposed. On top of them with a metal ring was attached leather loop for carrying on a belt. It was assumed that most of the time the bayonet will be in the sheath, and its installation on the machine will be made only before the start of the battle with the melee.

The bayonet for the Kalashnikov assault rifle 6X1 met the basic requirements, but still did not suit the military. The design of the fasteners on the head of the handle could only be used with the influx on the lower part of the barrel. The machines of the early series did not have such equipment, because of which they could not be equipped with new bayonets. The army planned to continue the operation of AK Type 1 until the development of a resource, which is why the manufacture of bayonets with specific fastenings was considered inexpedient.

On the basis of the bayonet 6X1, it was decided to develop a new version of additional melee weapons for machine gunners. The new project, which received the designation 6X2, should have been based on the existing design, but use universal fasteners so that the bayonet could be used with AK guns of different series, regardless of the specific design of the trunk and the nodes installed on it.

When creating a new bayonet, a blade borrowed from the base 6X1 was used. This part of the weapon has not undergone any noticeable changes. Only the handle was refined, the design of which was to include new assemblies for mounting on the machine. One of the main results of this alteration was the change in the dimensions of the bayonet. Its length has increased to 315 mm, and the length of the blade - to 215 mm. The overall layout of the parts, with the exception of some nuances, remained the same.

In order to provide the possibility of mounting on automatic machines of various types, not equipped with special fastenings, the bayonet 6X2 received universal mounting systems. A ring with an inner diameter of 17,7 mm, designed to be mounted on the barrel, was placed on the spider of the bayonet. At the same time, the bayonet received a new latch mounted inside the cross and the front of the handle. The control button was brought to the opposite side of the grip handle. On the handle head, in turn, a cut ring appeared, which was proposed to be worn on the trunk. Between the cross and the metal head were plastic cheeks, connected by screws.

When installing the bayonet on the machine, it was necessary to put the rear grip of the handle on the barrel in front of the venting unit, and then slide the cross ring on the barrel. When this happened, the fixation of the bayonet with the latch. After pressing the button, it was possible to remove the bayonet and put it in the sheath or use it for other purposes.

The sheath for the bayonet 6X2 as a whole repeated the unit for the blade of the previous model. The differences consisted only in their dimensions: a slightly longer blade demanded an appropriate means of storage. As before, most of the time the bayonet was supposed to be in the sheath. Attach it to the machine should only be necessary, if possible, start hand-to-hand combat.

The bayonet type 6X2 for the AK Type 2 assault rifle went into series in the early fifties. These weapons were equipped with new-made serial automata. In addition, the mass release allowed to equip the blades and weapons of the old series. Thus, over time, all or almost all of the AKs in the army were equipped with bayonets. In addition to the 6X2 designation in the armed forces, the GAU index 56-X-212 was also used, based on the index of the machine gun itself - 56-А-212. Often there is an erroneous index 26-X-212, but it is not true, since the GAU indexer arr. 1938 was simply missing the “26” section, and all designations began with a five. 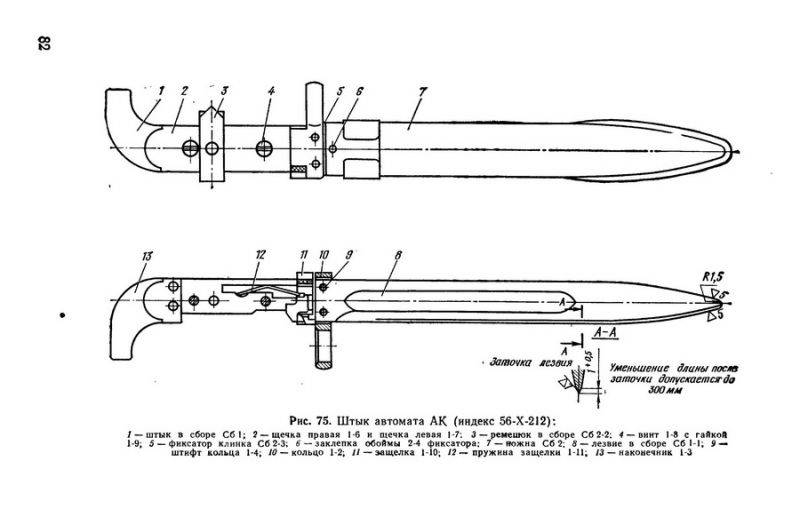 The structure of the bayonet 6X2. Figure Rusknife.com

Initially, the bayonets 6X2 were made only in the Soviet Union. Over time, licenses for the manufacture of Kalashnikov assault rifles and bayonets for them were transferred to several foreign countries. It is noteworthy that AKM-type automata were mainly produced abroad, but this weapon was often equipped with exactly 6X2 bayonets. Similar products were manufactured and used in Bulgaria, GDR, China and other countries.

At the end of the fifties, a modernized version of the Kalashnikov assault rifle, AKM, was adopted. In the technical assignment, in accordance with which this weapon was developed, it was originally required to create a bayonet-knife of a new design. Due to this, all AKM from the very beginning went off the conveyor with blades. For several years, industry and the army have replaced the old AK machine guns with new AKMs. Together with them were replaced and bayonets.

The active exploitation of the 6XX2 / 56-X-212 bayonets continued until the end of the very first modification of the Kalashnikovs. In the future, these blades were sent to storage or for remelting. Part of the bayonet knives later sold out to museums and private collections. The army, in turn, switched to new bayonets with new features and capabilities.