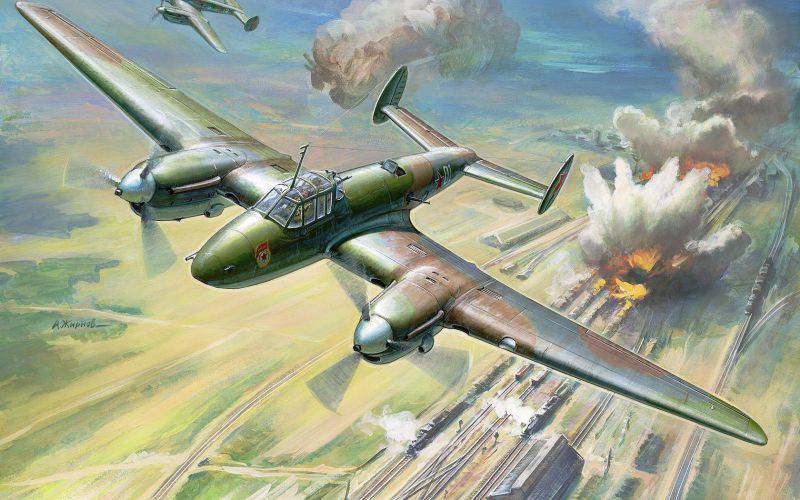 Transport is an essential element of the country's military-economic potential. Industry and agriculture will not fulfill their task of providing the army with weapons and food if the communication between the front and rear is broken. The mobilization, concentration and deployment of troops in theaters of military operations cannot be carried out without a developed and specially prepared transport system.

Of particular importance in meeting the needs of war were the railways. In the years of the Great Patriotic War, their share accounted for over 90% of military cargo transportation and over 97% of personnel transport on the continent. Therefore, during the war, the railways were one of the main targets of warfare. When planning operations for the seizure of railway junctions and stations, traffic disruption on railway communications has always been given great importance. The air force, partisan and sabotage detachments conducted special operations to disrupt railway communications.

The experience of the Great Patriotic War showed that the scale and methods of struggle on railway communications primarily depend on the military-political goals of the war, the available means of struggle and the current operational-strategic situation.

In the first period of the war, Soviet aircraft attacked railways due to a shortage of bombing aviation and attracting it mainly to ensure the combat operations of the ground forces, carried out by small forces with significant interruptions, which allowed the enemy to quickly restore the destroyed. Therefore, the actions of aviation by railways could not have a significant impact on the operational and supply traffic of the enemy.

In the second and third periods of the war, our aircraft seized dominance in the air and began to inflict massive strikes on rear transport facilities. The main tasks of aviation in its action on railway facilities were: delaying the advancement and concentration of the enemy’s operational reserves, disrupting its planned withdrawal and supply, prohibiting the export of our people and economic resources to Germany.

The most active Soviet aircraft operated on railway facilities at the time of preparation for the decisive battles of the summer 1943. These days, the Supreme High Command ordered to intensify the fight against transportation in the enemy's rear, in order to disorganize the concentration and deployment of its troops. To combat the enemy's communications, aviation of the Western, Bryansk, Central, Voronezh, South-Western and Southern fronts was engaged. The strikes were carried out on all major roads in a wide band, to a depth of 250 km beyond the front line — by front aviation, 250 km and more — by long-range aviation. 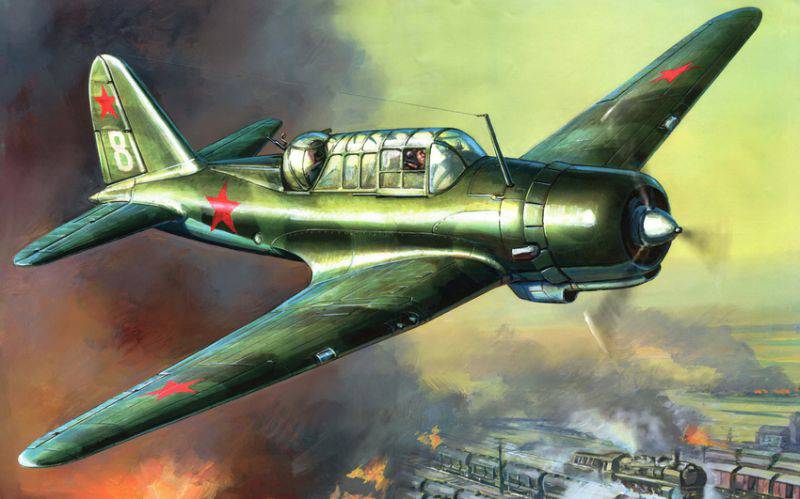 Usually, in the air army, to ensure these actions, one assault and fighter regiment was assigned. Each railway direction was assigned a permanent group of two to four hunter aircraft. This made it possible for pilots in a short time to study the order of movement of enemy echelons, terrain, air defense on all sections of the road and, successfully, to combat German transports. Long-range aviation (ADD) struck mostly at railway junctions and bridges. In April-June 1943 alone, it performed more than 7,5 thousand fly-by-year flights.

The experience of the war showed that in order to achieve major operational results, it is necessary to use massed aviation simultaneously on several main railway objects, which is vividly confirmed by the following example. In the Battle of Kursk, 2, 5, 3 and 17-I air armies were involved in disrupting transportation and destroying German reserves. They conducted massive bombing of the enemy at the stations of Slavyansk, Barvenkovo, Makeevka, Pavlograd, Kharkov, Lyubotin, Merefa. From 6 to 17 in August, 2300 sorties were flown, causing the concentration of enemy reserves to be delayed. 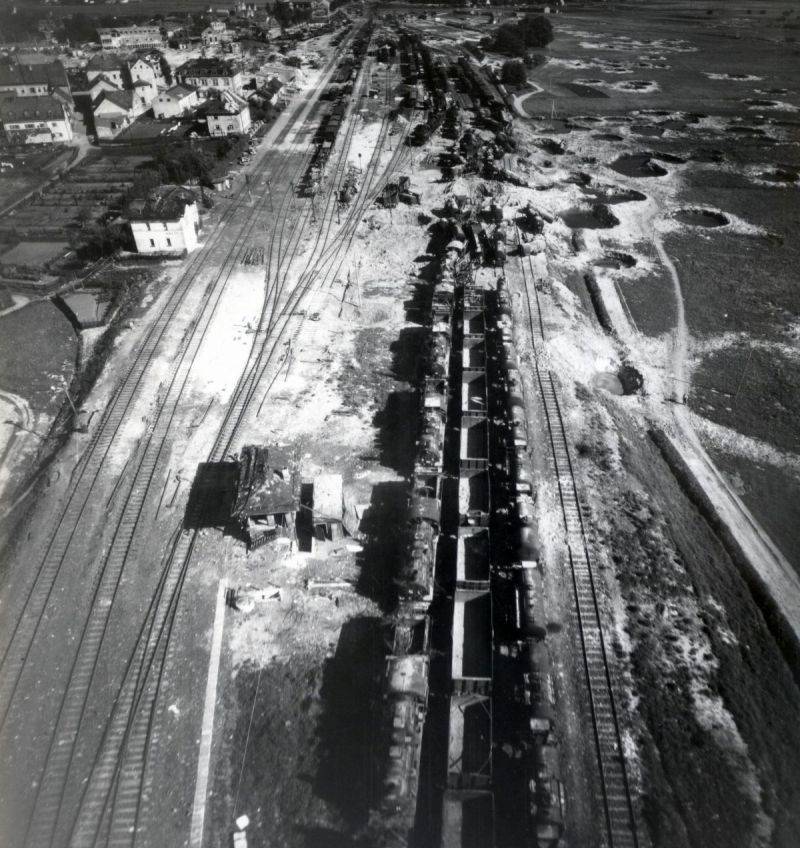 In order to prevent the enemy from restoring the destroyed one and resuming the railroad message on the sector subjected to a strike, our aircraft subsequently delivered continuous strikes day and night.

During the war, it was noted that the most effective strikes were carried out on railway stations where large fuel and lubricants depots, ammunition or trains with the same cargo were located. In such cases, even small groups of aircraft inflicted serious damage to the Nazis.

In hostilities for the liberation of Donbass, a group of 18 IL-2 305 th assault aviation division made a 25 August attack on ammunition depots at the railway station Barvenkovo. Bombs and missiles caused many fires. After the raid, the warehouses continued to burn and explode for more than two days. For almost a week, the station Barvenkovo ​​was blocked, and no train could pass through it.

In Proskurovo-Chernivtsi operation 8 IL-2, Klemashivka station was stormed to the station, where military troopers accumulated. In the first attack, the attack aircraft blew up the train leaving the station and blocked the train for a long time. With subsequent attacks, they destroyed standing trains and equipment in the vicinity of the station. Fire raged around. The trains burned, the cars with ammunition and gasoline exploded. This stopped the movement for a long time. 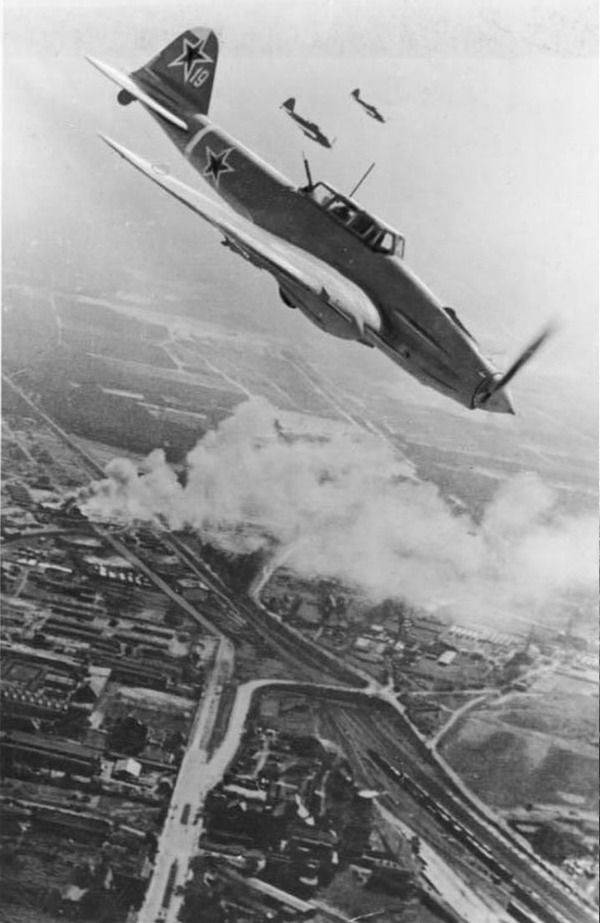 In order to prevent the enemy from reconstructing the tracks and resume railway communication, continuous attacks were carried out day and night, not only on transport facilities, but also on repair facilities. During the Second World War, one of the main targets for aviation operations was railway bridges. Their destruction made it possible to suspend movement for several days. Moreover, the greatest results were achieved in those cases when several large railway bridges were destroyed at the same time. This interrupted rail transportation for a long time on many highways, and contributed to the isolation of active sections of the front from enemy rear areas. So, during the Vistula-Oder operation, the main efforts of Soviet aviation during the offensive of the 5th strike and the 2nd guard tank armies were sent to disorganize the planned withdrawal of German troops and to combat suitable reserves in order to prevent them from reaching Warsaw. To do this, the railway bridge and the crossing over the Vistula at Vysehrud, the river crossing the Ohna at Kutno, the Warta at Serdau and the Lodz railway junction were destroyed. The destruction of these facilities contributed to our troops in the destruction of enemy troops in parts.

Important railway junctions and bridges were usually reliably defended by the Nazis, and for their destruction from the air required a lot of strength. In this case, as well as with a lack of forces and means, the destruction of the rails and the interruption of lines of communications in several vulnerable points on the hauls often brought more effect than slight damage to the railway junction and bridge, and did not lead to large losses of our aircraft.

The greatest effect in the destruction of rail sections was achieved in the event that there was a small number of through lines, and a section of the railway passed through inaccessible terrain.

Rolling stock was also a profitable target for aviation operations. This is because after destruction it was difficult to restore. In the event of the outage on the lines, even of a small part of the locomotives and cars, the movement was sharply reduced.

So, for example, our aviation, carrying out strikes on railway trains on hauls, frustrated the Germans' attempts to withdraw their military units from Orsha by rail to Minsk. By completing the 138 airplanes, the 1 Guards assault aviation division destroyed 10 locomotives and 15 echelons. The traffic on the Orsha - Tolochin section was paralyzed for a long time. 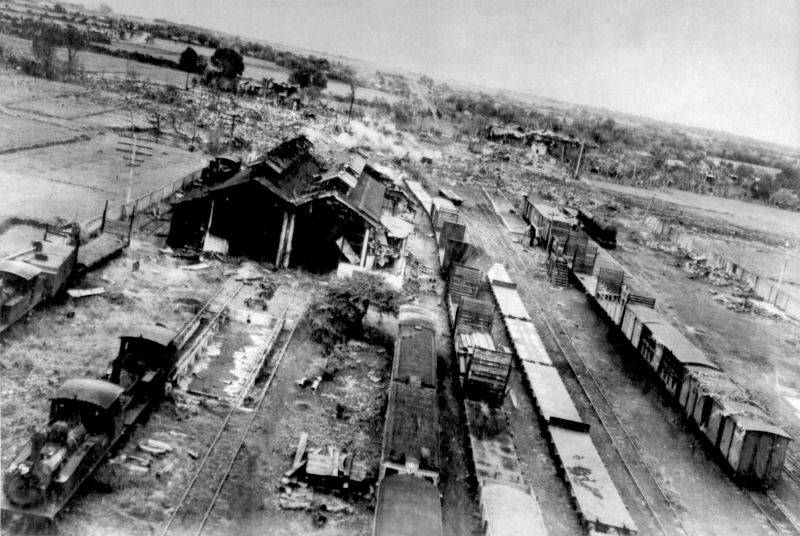 The experience of the war showed that the use of rolling stock largely depended on the supply of fuel, water and electricity. In this regard, the station devices associated with the supply of locomotives were also objects for aviation operations. However, simultaneous strikes on all the most important railway facilities and on several railway lines brought the greatest effect. In this case, the connection of the front with the rear in the band of entire operational directions was interrupted.

Characteristic in this regard are the actions of Soviet aircraft on rail lines in the Far East during the defeat of the Kwantung Army. At this point, the Soviet Army had a significant air superiority over Japanese aircraft, which made it possible to assign the bomber aircraft of the 12 Air Army with the task of paralyzing the work of all the most important transport communications and preventing the enemy’s operational reserves from the battle area. Continuous strikes of Soviet aviation against railway facilities have once again confirmed their effectiveness. Almost all the main communications of the Japanese were put out of action, and the maneuver in reserves was constrained, which made it impossible for the enemy to transfer fresh forces to the battle areas. The Japanese command in the conditions of impassable roads and thaws failed to tighten the operational reserves in time and occupy the prepared defensive lines.

However, in general, during the war, the communications of the enemy’s communications to our aviation were carried out by small forces. The Soviet Air Force focused on the direct support of ground forces and the conquest of air superiority. The effectiveness of air strikes on railway communications depended mainly on the presence of bomber aircraft and the correct choice of transport facilities. 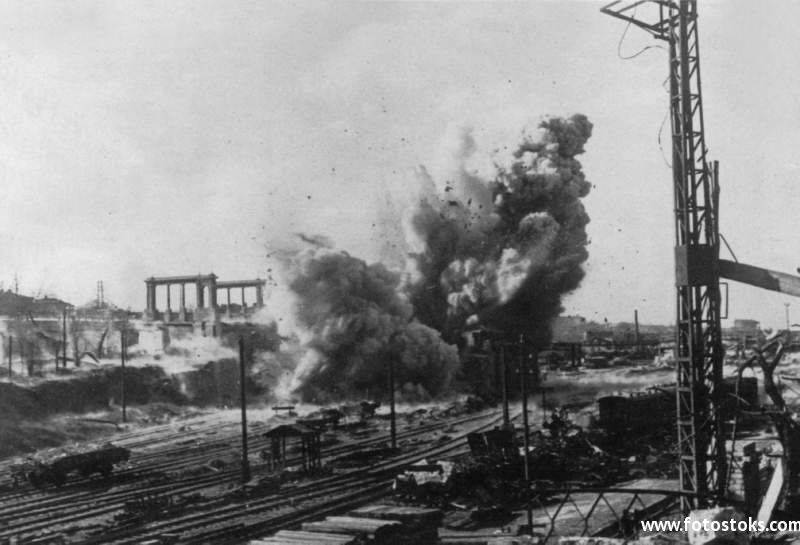 With a significant number of aircraft, the impact on the roads gave the maximum effect in order to isolate the active combat area from the inflow of operational reserves and the disruption of the material and technical supply of the troops. At the same time, simultaneous massed (sometimes up to 100-500 aircraft) and continuous airstrikes on all major railways and transport facilities were applied. The main efforts were directed to the destruction of railway junctions and bridges, along which the main stream of troops and supply supplies went to the front. With a limited number of aviation, as well as a reliably organized system of air cover and restoration of railway junctions and bridges, the greatest result was achieved by destroying the trains and damaging the tracks on poorly covered routes. The “rail war” of Soviet aviation fully justified itself.

Ctrl Enter
Noticed oshЫbku Highlight text and press. Ctrl + Enter
We are
The world's first railway troops were from Russia. For the holiday ZhDVTactics of the Afghan insurgents
50 comments
Information
Dear reader, to leave comments on the publication, you must to register.