January 30 2016
115
The invention relates to military equipment and can be used in a smoothbore shooting, pneumatic weapons, artillery and in other devices where throwing a ballistic projectile under gas pressure is required, as well as in existing rifled weapons to increase the speed of rotation of the projectile or bullet. A device for imparting rotational motion to a projectile in a smoothbore weapon is a section of the weapon barrel or a nozzle to the barrel having side slots located at an angle to the barrel channel. Powder gases, pushing the projectile along the bore and reaching the device, due to the presence of slots in the device, exit these slots, creating simultaneously a lateral draft for the projectile. In this case, the projectile makes an axial rotational movement. EFFECT: simplification of production of weapon barrels, increasing the operational resource of barrels, increasing accuracy and range of fire, as well as increasing the penetration ability of a projectile or bullet. 3 ill.
The invention relates to military technology and can be used in a smooth-bore small arms, airguns, artillery and other devices that require throwing a ballistic projectile under the pressure of gases.

The disadvantage of the prototype is the difficulty of making rifling, as well as the fact that a bullet or projectile, passing rifling, experiences considerable resistance to the friction force, which negatively affects the durability of the barrel, the accuracy of the fight, and also requires an increase in the powder sample. In addition, the bullet, passing the bore, on the departure is deformed due to the interaction with rifling, which also adversely affects the ballistic characteristics. 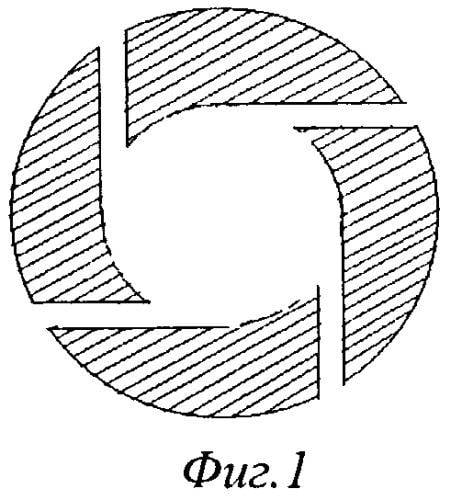 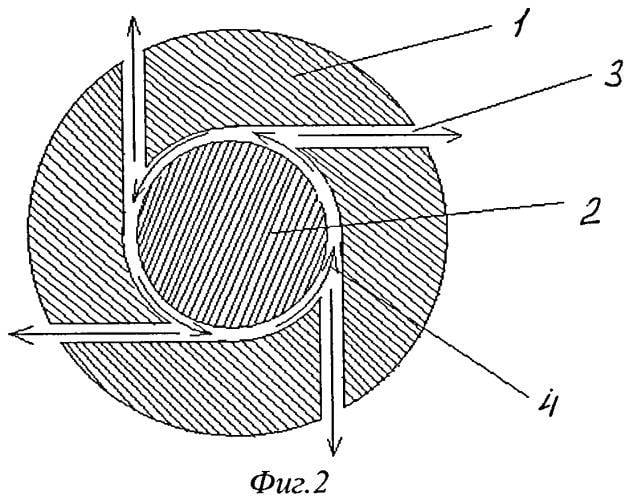 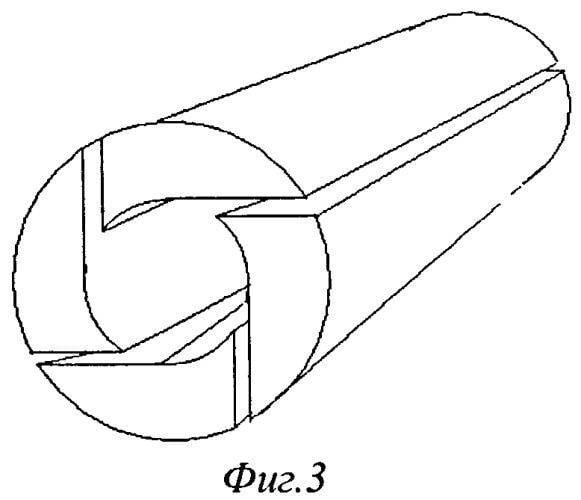 The invention solves the following problems.

1. The possibility of giving the projectile or bullet rotational motion without the use of rifling.

2. 3 is a significant simplification of gun barrel production.

4. Reducing the powder charge, which should have a positive effect on saving the production of cartridges, reducing the recoil of weapons during firing, increasing the life of parts and mechanisms of the weapon, and the resource of the barrel.

5. The possibility of using all-metal shells or brass, copper, steel bullets, which will positively affect penetration.

The technical result obtained from the invention, is to give the projectile or bullet rotational motion in a smooth-bore weapon.

Technical solutions with features that distinguish the claimed solution from the prototype are unknown. This suggests that the proposed solution is new and involves an inventive step.

A device for giving a projectile or a bullet a rotational movement is a section of the barrel or a nozzle to the barrel, having side slots arranged at an angle to the bore of the barrel.

The device works as follows.

Using the term “slots”, the author was guided by a technical dictionary, namely: “Slots are holes that are usually oblong in shape”. Since the term “usually” is not exclusive, the author assumes that these holes may have another shape.

Ctrl Enter
Noticed oshЫbku Highlight text and press. Ctrl + Enter
We are
Railgun predecessorsMilitary base on the moon (cosmic prospects of pneumatic electric weapons)
115 comments
Information
Dear reader, to leave comments on the publication, you must to register.